I wondered as we started hiking today whether we should have continued on yesterday. Was I making something out of nothing? But we pretty quickly hit a steep, snow covered downhill section and I was happy with my decision. With the firm snow and my microspikes, I was able to make easy work of what would have likely been a frustrating descent yesterday.

We arrived at Rock Creek early in the morning and had to figure out how to get across. We’d heard that there was a log crossing, but all of the logs that we saw were partially submerged under the raging creek. Further upstream, it appeared that the creek widened significantly, so we considered doing a wet crossing there. First we checked our gps though and realized that the advised summer crossing (and presumably its log) was actually further downstream (but not before I got my feet wet in the marshy area). 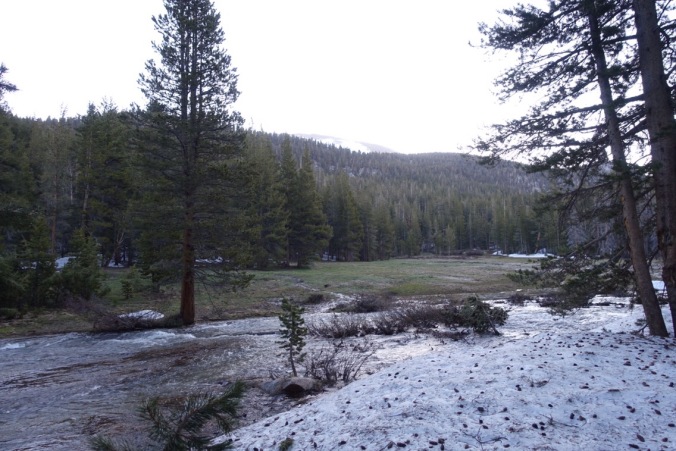 On our way to the summer crossing, we ran across hikers camped along the stream who were asking if we were part of Ned’s snow safety group. Apparently he had lost his group the day before and had been looking around for them near the creek. We’d actually seen what I thought was his group passing our camp the prior evening and about 20 minutes later saw a guy that I thought was Ned pass, so this made sense. Maybe we won’t be running into his group after all?

We followed a rock trail sign to a log crossing across the creek. The log was large, but had bits of branches poking up. Crossing it was terrifying. I’d intended to walk across, but walking across a log that is raised above a roaring creek is much different than balancing across one on the ground. I ended up crawling across, which wasn’t helped along by the fact that I’d removed my leggings in preparation for a wet crossing. Michael was up next and I thought he would kill me as he inched his way across the log. By the time we both reached the other side I suspected that a wet crossing upstream would have been preferable. 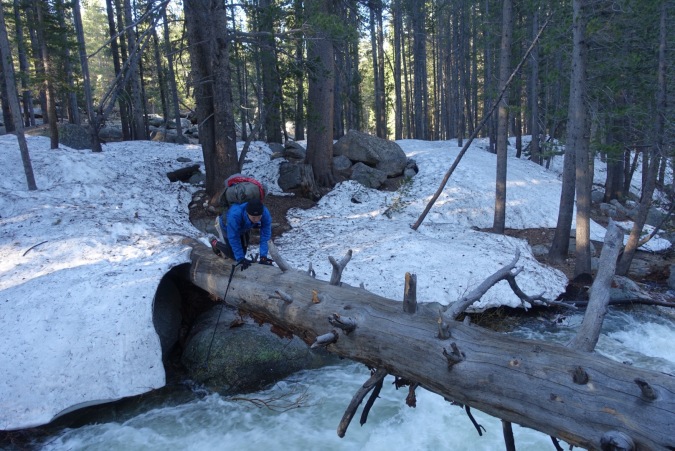 Surprisingly, the crossing was followed by a dry, snowless uphill To the top of Guyot Pass.  We went up to almost 11.000 feet with minimal snow. I’ll take it!

We leap frogged with a couple young women throughout the day. It was interesting to compare our snow strategies since they’ve been stopping early in the afternoon as well. It sounds like they’ll be climbing Mt. Whitney tomorrow, so we likely won’t continue to see them in this section. We’ve both climbed Mt. Whitney and had no desire to do it again on the PCT since it would mean carrying more food in this section (and this was before we knew it would be a big snow year).

We crossed another amazing meadow this morning and didn’t even get lost this time!

Michael’s Note: I’m not 100% sure, but I think this was not a meadow. Along this stretch of trail is a segment known as the Guyot Desert. It’s dry and sandy, not lush and grassy. But with the snow you can’t be sure. I hiked here in August 2001 with my Boy Scout troop, but I can’t really recognize the terrain. 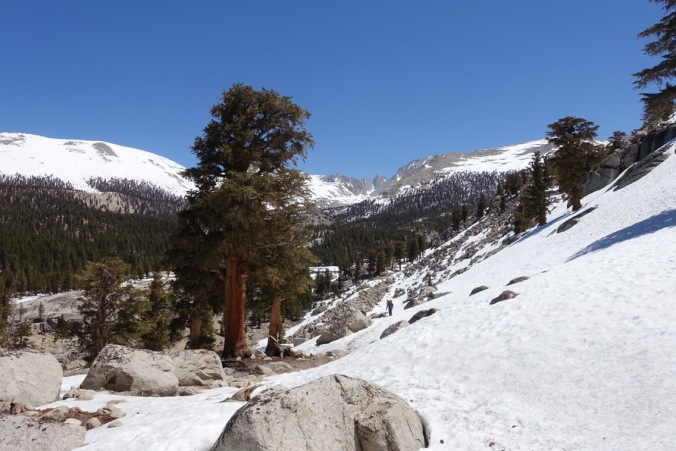 We also had a chance to practice glissading on our downhills (sliding down on our butts), including one big one! I’m starting to feel much more comfortable with it and am definitely happy to have leggings while doing it! I want to be comfortable with glissading before our Forrester descent and I’m already feeling much better about it. 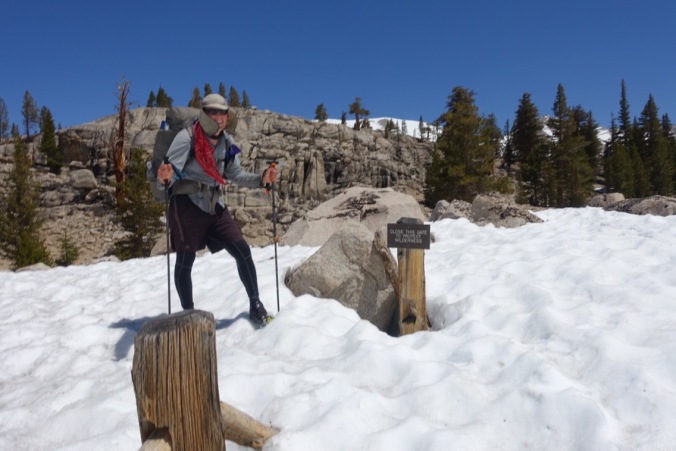 The sign asks hikers to please close the animal crossing gate behind them. The gate was not closed. I don’t think it mattered.

Crabtree Meadows is now a lake!

Around noon we came to Whitney Creek. Without thinking we prepared for a wet crossing because we saw the young women had crossed in their sandals. Should be easy. We didn’t even look around for other options. What we didn’t realize was how deep it was!  It was basically up to my crotch and I ended up accidentally soaking one of my shoes anyway. Later, as we dried out and ate our lunch, we saw people do a dry crossing just downstream. We investigated after lunch and they crossed on a log/rock combo that I’m not sure that I would have been comfortable with. Still, it was a good reminder to check out the situation ourselves before blindly crossing!

We’d been entertaining idea that we might set up for the Forrester ascent today, but coming up from the first Whitney turnoff it was clear that wasn’t happening. We hadn’t even gone 10 miles, it was 2pm, and there was more snow ahead. We decided that it was better to feel well rested before tackling that big climb.

After our Whitney Creek crossing, we managed dry crossings of a few seasonal streams, which felt like an accomplishment because of their snow covered shores. But we took our time to scout them out and found an upstream snow bridge for one of the larger ones.

We are now back on trail that we’ve already hiked during our 2015 JMT hike. This is our first section of familiar trail so far and it’s a nice feeling. We reminisced about our JMT hike and even found the log where we stopped to have lunch on our second to last day and ran into a PCT hiker! Of course, the meadow that we were overlooking looks a little different now. 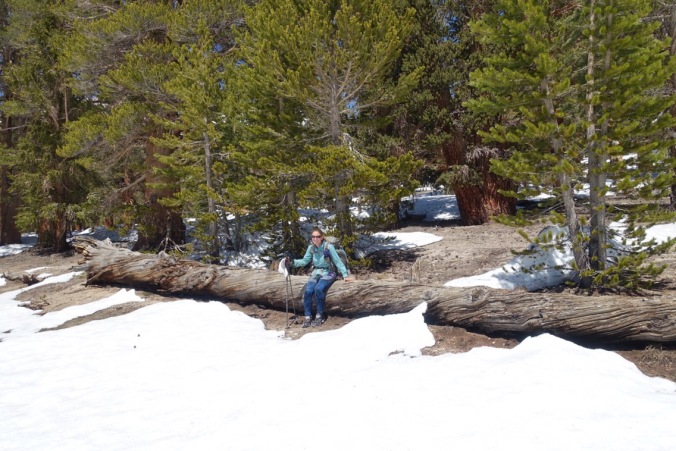 Not the grassy meadow from my memories.

By mid-afternoon I quickly started to tire out from all the snow walking. The snow was soft and the area that we were walking through had large sun cups. The problem was that the campsite listed on Guthooks that was nearby was completely covered in snow.

We continued on, and finally found a dry spot near a tree that was just big enough for our tent. Success! Now just needed to find water… There was none nearby, so for the first time we had to try to melt snow. I filled a couple platypus (soft-sided water bottles) with snow and set them out in the sun to melt. The strategy worked okay, but we still had to use our stove to heat up a small amount so that we’d have enough for dinner and the morning. 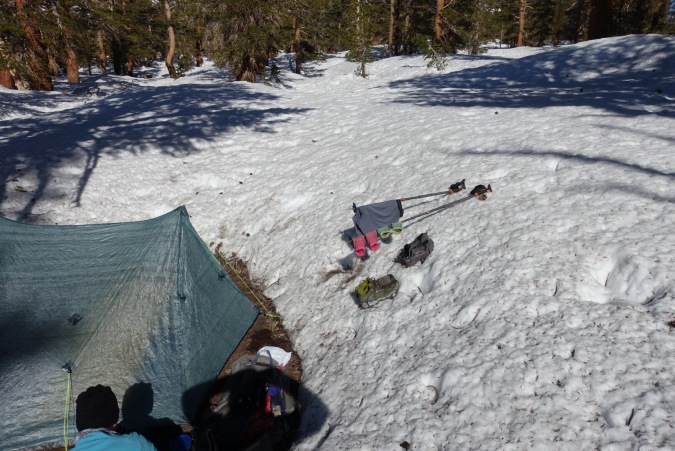 Michael is very proud of his improvised clothes line.

Our plan is to set up for Forrester tomorrow. It will probably mean a short hiking day unless there is camping above the Tyndall Creek ranger station that isn’t covered in snow. From what I hear that isn’t likely though. That just means more rest for us though!

2 thoughts on “Day 49: Back In Familiar Territory”