**We’re back!!  It’s the one-year anniversary of our reaching the Northern terminus (spoiler alert) and it turns out that this post has been hanging out in my drafts folder for months now.  It’s honestly been such a gift to have these posts to return to whenever I want to re-live a moment on the trail (which is more frequent than I’d like to admit); I don’t want the record of our memories to remain incomplete!  And, it turns out that I have a collection of fully-written and half-written blog posts that are still waiting to see the light of day (along with a few days with just mileage notations and pictures… and may remain that way).  I guess that it’s better late than never to finish this up!**

We only had 12.5 miles to hike this morning before reaching While Pass.  Normally we plan to meet up at some point in the 6-8 mile range, but the call of real food and cold drinks was strong so we decided to hike straight through to “town.”

It turned out that we weren’t the only ones camped at Lutz Lake last night, a saw another tent as we turned the corner around the lake this morning.  Still amazing that there weren’t more people around!

The trail this morning did not disappoint.  The vegetation has really opened up.  It’s not like there are no trees anymore, but all of a sudden we’re back to getting views again!  We were treated to great views of Mt. Rainier because the trail took us along a ridge line for a while.  After barely having seen Mt. Hood due to smoke and rain, it was nice to get a clear view of Mt. Rainier.  Even after the trail left the ridge line it continued to hug along the side of the mountain instead of tucking itself away in the trees.  I’m definitely loving Washington these last couple of days!

This kind of terrain makes for much better views than a forest.

Mt. Rainier and around.

Buoyed by the views (and perhaps by the allure of town), I was feeling really strong this morning.  When I hit the road, it was quickly apparent that there was no point trying to hitch.  All of the cars were going the wrong way – in the 0.6 mile walk to White Pass I only saw a couple cars at the very end going in my direction.  At least there was a wide shoulder!

I guess the road is in the Wenatchee National Forest.

There isn’t much at White Pass (and in typical fashion I took no pictures in “town”).  We spent a few hours hanging out at the Kracker Barrel – not the restaurant, but instead of gas station/convenience station.  It was complete with gas station style food, so my craving for town food had to be satisfied by a pepperoni pizza pocket.  At least I didn’t have to do “dishes”?  They were super hiker friendly though and had tables inside that we could sit at and charge devices.  Some people were even doing laundry, but we figured that without a shower there really wasn’t much point… we smell.  Sadly, there was no wifi and only really poor cell signal – enough to send a text and call home, but no data to get online.  Bummer!

We saw a mix of familiar and new faces while hanging out.  We ran into Runner 5 and Tailor Made again.  It’s been forever since we last saw them… maybe just after Ashland?  Most of the hikers hanging out outside the Kracker Barrel were sobos though – people that we’d see just this once (unless we run into them in the Sierras).  They still seem so green and clean, and filled with excitement and uncertainty.  The hiker boxes were better supplied as a result as well.  Granted, we sent a box here and ended up parting with some mac n’ cheese and several baggies of M&Ms (unclear how we thought we’d eat so many, but other hikers hanging out didn’t seem to mind).

We planned to make White Pass a quick stop with just enough time to enjoy some food, charge our devices, and sort through our resupply box.  We only have a few more days until we need to be at Snoqualmie Pass so that we can get back to Oregon for the eclipse, so an overnight stay really wasn’t in the cards.  Just as we were getting ready to leave, Valley Girl showed up!  We thought that he was in front of us since he left Cascade Locks the day before us, but apparently he took a zero at Trout Lake to go rafting with a friend so we managed to catch up!  I was jealous to hear that he did Knife’s Edge this morning with clear skies – it must have been beautiful!  We spent some time catching up and then pried ourselves away (it was already after 4pm and we wanted to make it another 7 miles).  We left before him, but I’m confident that he’ll quickly catch up.

We hiked along the road back to the trail and soon entered the William O. Douglas Wilderness.  I think that this might be the only wilderness zone named for a Supreme Court justice.  Obviously, Michael demanded a picture next to the sign.  Since we’d just left “town,” we had another climb this afternoon through the trees.  No more expansive views, although there was a lovely meadow and small lake near the top of our climb.  The trail was oddly empty of hikers… until we got to the lake that we planned to camp near.  Although most of the camping spots were out of view from the trail, I could hear all of the hikers as I passed by.  After spending the afternoon in town, I had been looking forward to a quiet afternoon and didn’t feel like squeezing in with a bunch of sobos.  Luckily, there was a site near the end of the lake (it’s a long one) that had a free spot with only one other tent in the vicinity (but did have some friendly mosquitos). 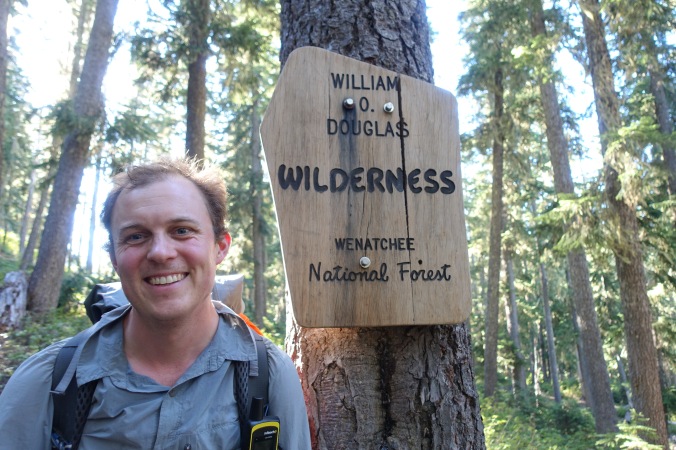 Justice Douglas was committed to wilderness conservation, and is known for the “Lorax Opinion.” 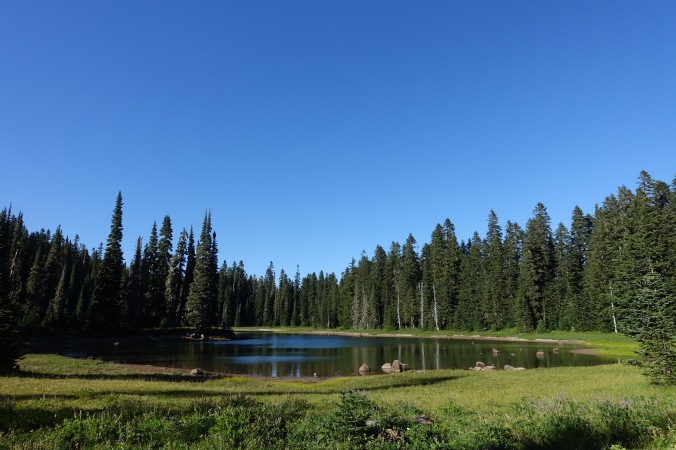 A lake along the way. 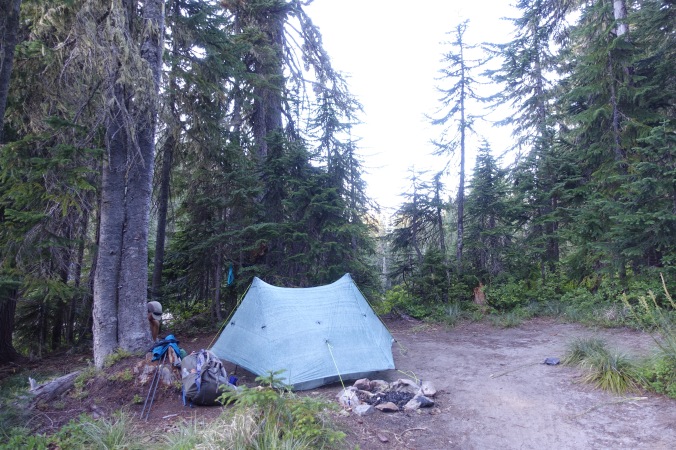 Camped on our own.

We have four (really 3.5) days to make it about 96 miles.  It would have been nice to have made it a few more today, but I think that we did pretty well for a town day (and we already got into camp later than I’d prefer).