**We’re making a push to finish recording our memories from our 2017 PCT adventure.  This post is from my collection of fully-written and half-written blog posts that are still waiting to see the light of day (along with a few days with just mileage notations and pictures… and may remain that way).**

The day in pictures and random thoughts:

The sunrise was amazing this morning.  Normally we wake up, pack up, and get walking as quickly as possible.  Today, I couldn’t help but take a moment to go out to the dirt road next to our camp site and take in the view.  Pictures don’t do it justice.

We had a big downhill in the morning with our water source off-trail a bit and downstream from an awesome little waterfall.  So picturesque!

After stopping for water, but before getting to the bottom of our descent, I started to hear a buzzing noise.  It took me a moment to place the sound… a drone!  It was hard to spot since we were in the trees, but I finally could make it out in the sky above me.

When we got down to the road, we me the drone operator.  It was a young guy who had shown up to help out with the search for Sherpa.  I guess the organizers had expressed interest in having a drone available to help out, but the guy had shown up late after the search was already underway so no one was around.  The crazy part was that he was telling us about how he had a really limited battery life for his drone… while he was playing around with it waiting for the other searchers to return to the meet-up point.

While talking with the drone operator, who should we run into but Maximus?  We last saw Maximus before we got off trail for a wedding way back in Chester on Day 65.  While we said goodbye to the drone operator and started our big ascent, Maximus stayed behind to chat (and likely scrounge for lunch when the volunteers came back).

We ran into a bunch of the volunteer searchers, wearing bright orange hats, as we climbed back up the mountain.  (One was even openly carrying a gun — not something that we see very often out here!)  Everyone was really nice and we promised to keep an eye out for abandoned gear, but it seems unlikely that any new clues will be spotted from the trail at this point.   Seeing all of the searchers definitely grounded our day and was another reminder of the very real (but rare) dangers that hikers can face out here.

We spent the afternoon primarily in the trees, with occasional patches of clear-cut for large power lines.  It seemed like it was uphill all afternoon, but I guess the elevation profile tells a slightly different story (still over 5,000 feet in elevation gain!).  It was a boring enough afternoon that we apparently took zero pictures between our off trail water stop at 10:30 this morning and 6pm.  Looks like our views of Mt. Rainier may have come to an end.

First picture (taken around 6pm) since our morning water stop!

We lucked out and are camped near a small creek this evening (contrary to our recent rule of water sources having no available camp sites).  We only have about 13.4 miles to go before reaching Snoqualmie Pass, which should be doable before Michael’s friend Alan picks us up at noon tomorrow, so that we can make it back to Oregon for the eclipse on August 21. 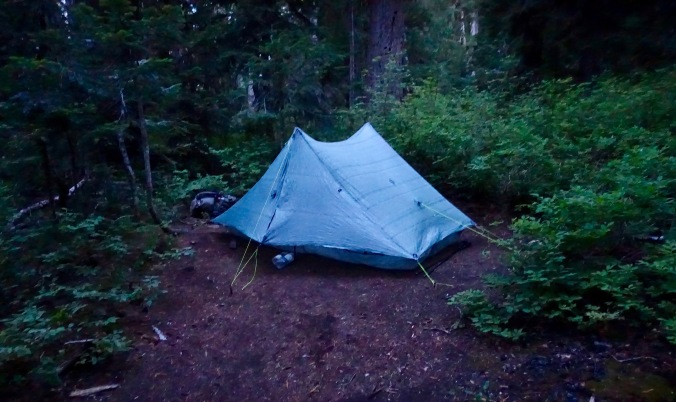