What a difference a cold night makes on snow conditions! We were up early this morning (4am alarm… but hit snooze a couple times) and greeted by frozen condensation in our tent. By the time we were up and walking, the snow was firm. I’m loving my microspikes! It make walking on the firm snow super easy!

Of course, the snow only continued for another mile or so. Along the nearby saddle there was lots of dry ground for camping. Oh well, I liked our site and it ended up being protected from the wind. 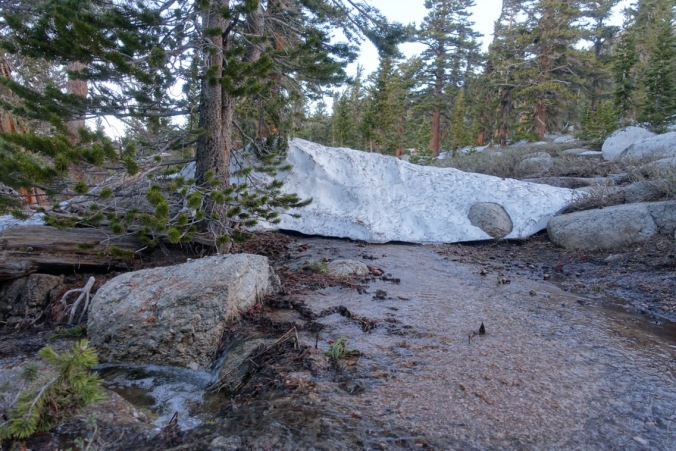 The trail became a stream flowing out from under the snow.

Then the trail miraculously became clear of snow and we had a couple miles or so of fairly clear trail. Sweet! I’d honestly thought that we wouldn’t see this much clear trail once we hit the snow, but I’ll take what we can get.

Early morning meadow crossing. It was impossible to capture the sense of peace and tranquility as we crossed.

And then we were back in the snow. It’s not allowed to be that easy. We crossed a couple gorgeous meadows covered in snow this morning. The trail technically goes around the meadow, but we followed the footsteps over the snow through them. I think meadow crossings might end up being a challenge, because the footsteps are clear on your way into the meadow, but then seem to magically disappear and we had to navigate to find the trail again. Totally worth it though because they’ve been breathtaking. Pictures truly cannot do this section justice and it makes the extra effort of walking through the snow worth it.

After a few miles we came across the final junction to Horseshoe Meadows. Near the junction was a nice, steep wall of snow that it looked like people had practiced self-arrest on. We’d been meaning to practice so that we’d actually learn how to use our whippets and decided to give it a go. Big mistake. 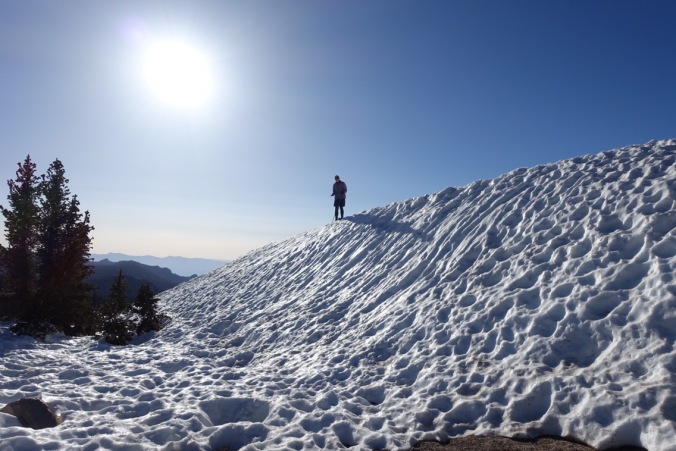 I went first. I left my backpack at the bottom of the hill and carefully slid myself down the steep slope. Surprisingly, my whippet instantly caught. Success! Except now I was hanging off the side of the hill with both hands holding tight onto my whippet, my legs dangling in the air. Umm, now what? After much trying, I finally got my microspikes to grip into the steep, hard slope.  Holding on with my heavy backpack on would have been a challenge.

Next up, it was Michael. He slid off the hill… and kept sliding. His whippet didn’t catch and he sort of crashed at the bottom onto his knees. Ouch. We both tried again with varying success, but I think we both left with more scratches and bruises than when we started. I think the slope was too steep and the snow still too hard for this to have been a good practice spot. Lessons learned.

As we continued down the “trail” we spotted Ned’s group practicing their self-arrest technique on a much nicer looking hill. I guess we’ll have to keep our eyes out for another spot to practice (or quiz one of Ned’s students later about what we’re doing wrong). 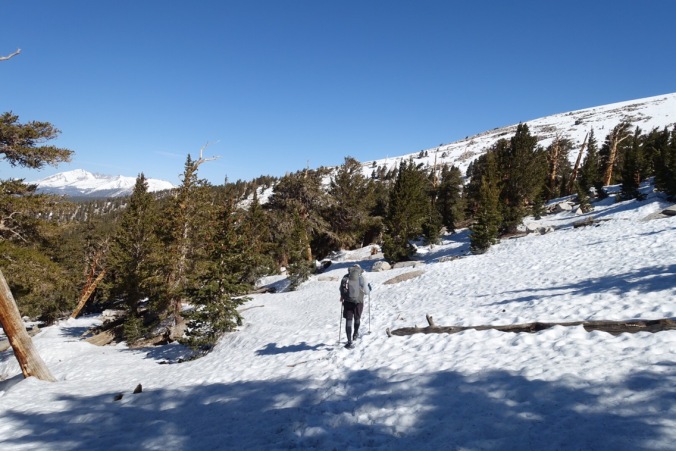 After making good progress early this morning (on largely clear trail), the snow really started to slow us down. There are tons of sun cups (where the sun melts snow unevenly, creating “cups” in the snow) when walking across the Meadows and I especially found the descents to be exhausting. While sometimes there were good footprints to follow, at other times we found ourselves struggling to get back on a good route to get towards the trail. Despite the footprints, we saw almost no one as we walked today. Maybe this will be a trend? 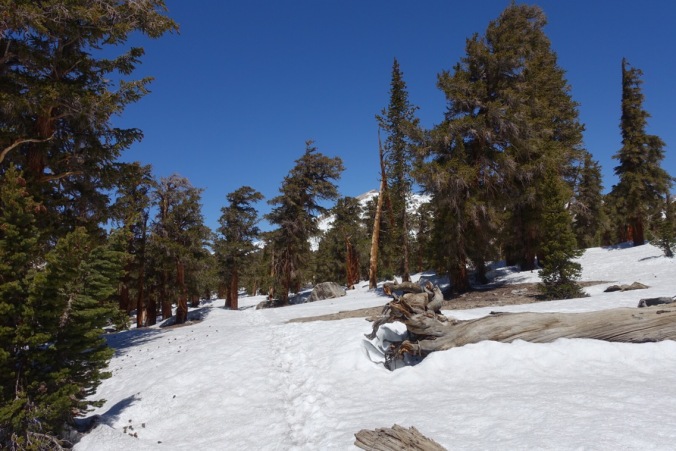 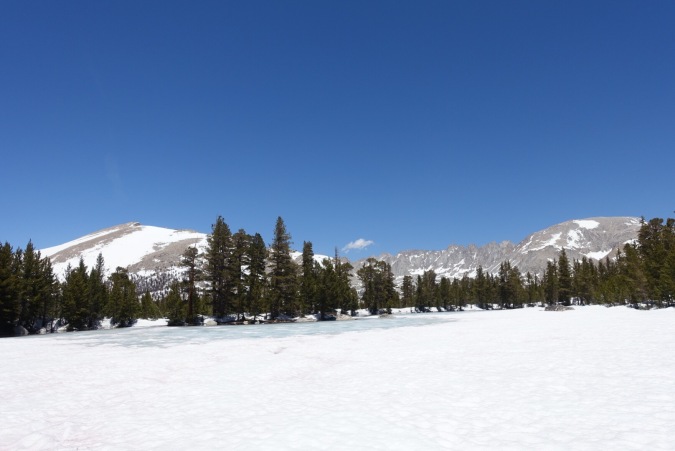 We ate a quick lunch so as not to waste our time on firmer snow. By then it was already starting to get slushy and our footing became less certain. As we were going down one of the large hills there were tracks as though people had skied down on their feet. Turns out that I’m not very good at this and fell multiple times — one of which hurt my back quite a bit. Easing our way down the hill was quickly disappearing as an option though because the snow wouldn’t hold under our footsteps.

And now to go downhill…

I decided to call it a day. It was only 2pm. We’d already surpassed our 10-mile-per-day goal and had come across a relatively flat and dry area with access to water nearby. Honestly, stopping this early was a tough decision. Intuitively I know it was the right one for me. Hiking later into the day is exhausting and the softer snow increases the chance of injury. But this other voice in my head is thinking about the long days we walked in Southern California and feeling like maybe I am just being lazy. It doesn’t help that after a day of seeing barely anyone it seems like a bunch of people are now passing our tent site in the late afternoon and early evening. How do they do it?

Admittedly, it’s been nice relaxing this afternoon and not having to cook dinner in a rush. And I’m exhausted. Hiking in the snow and navigating to find the best route is exhausting!  Tonight﻿ is the first night that the bear can requirement is in place.  We almost got our remaining food and trash to fit!  We need to eat more food!

Elizabeth: slightly sore back, small mystery gash on my thigh (from self-arrest practice?).