Our “Go South for warmth” plan worked the moment we landed in Hong Kong. After weeks of cold, we could walk around in shorts and t-shirts. At times we may have felt underdressed, but that was about formality, not temperature.

We originally planned to make our visit to Hong Kong a quick stopover before heading to Southern China’s Yunnan province. What was intended to be a 2 or 3 day visit ended up being a full week! This post covers our visits to sights in the urbanized parts of Hong Kong. We also spent four days hiking the MacLehose Trail, a 100 kilometer (62 mile) trail across the “New Territories.” The hike is described in a separate post. 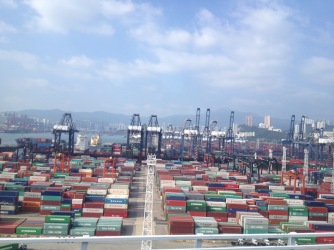 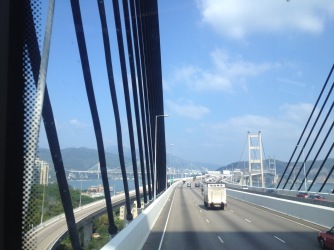 Hong Kong has several bus and ferry services, all of which let users pay with a stored-value card called the Octopus Card (allegedly the name is a pun in Cantonese, but we didn’t get it). We took the bus from the airport and then took bus, subway, and ferry services around the territory. But it’s much more than a transit card. The Octopus card works at lots of shops like 7-11 and Mrs. Fields’ Cookies — as a tap card, not a swipe or pin card. It even worked to pay the HKD 60 (USD 7.75) for my haircut. After a week in Hong Kong, we were officially obsessed with the convenience of being able to quickly pay for virtually everything with our Octopus card.  It meant that we never had to figure out bus fare or make exact change during our visit! 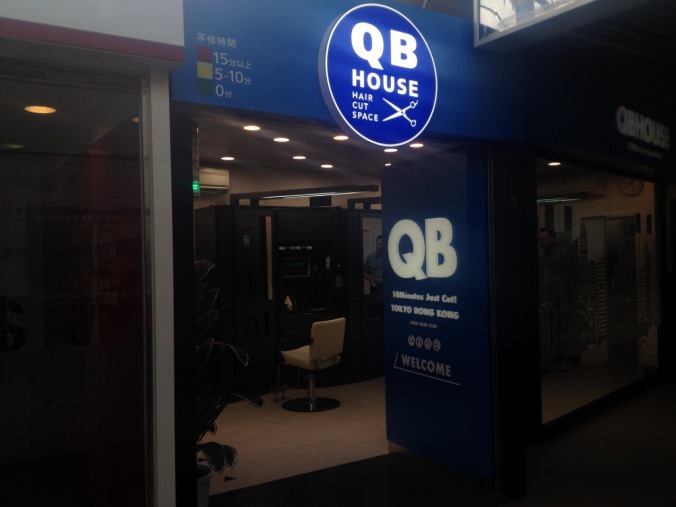 Our first night in Hong Kong we met up Elizabeth’s former co-worker, Dae Ho, for drinks and dinner. Dae Ho offered and we accepted his suggestion for a Southern restaurant (Southern USA, not Southern China) on Hong Kong Island. It was a good suggestion. While I enjoy tasting the food of the world, I do miss food I am used to. Later in our stay, we met up with Dae Ho again for Dim Sum, which was very good (and satisfied my interest in local cuisine). Both meals were also a great chance to catch up with someone from home and gain a little insight on the city from a Hong Kong native.

[Elizabeth’s note: It was awesome to see Dae Ho! While we have had a chance to meet lots of other travelers during our trip, it can still be lonely at times because you don’t have many sustained interactions (just lots of shorter ones). Nothing beats a familiar face. It gives us the chance to skip all of the introductory stuff (in which we end up telling the same stories about ourselves) and jump right into things.] 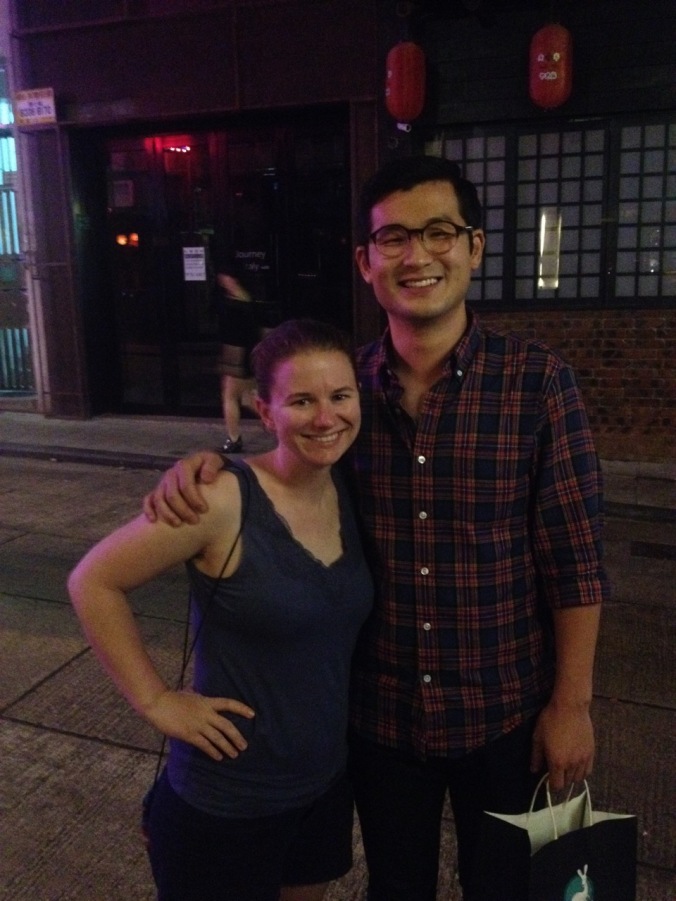 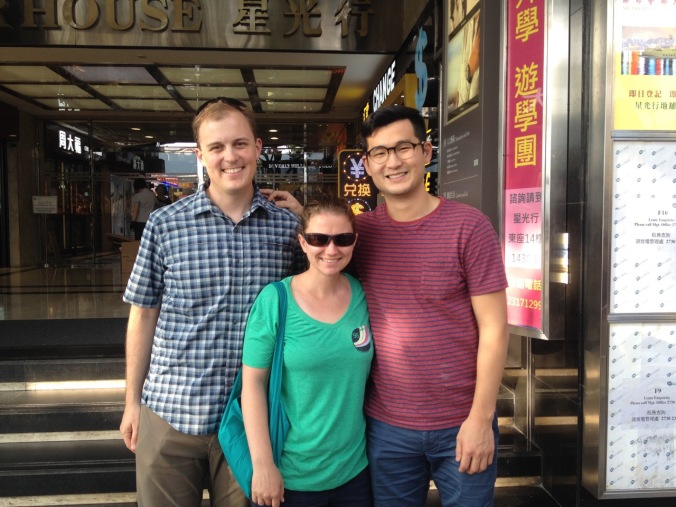 Dae Ho also insisted that we take the Star Ferry across the bay at night. We took it once at night and once during the day. Both times it offered a beautiful view. At a cost of two Hong Kong dollars (less than 25 cents US), it’s one of the best priced tourist attractions in the world. 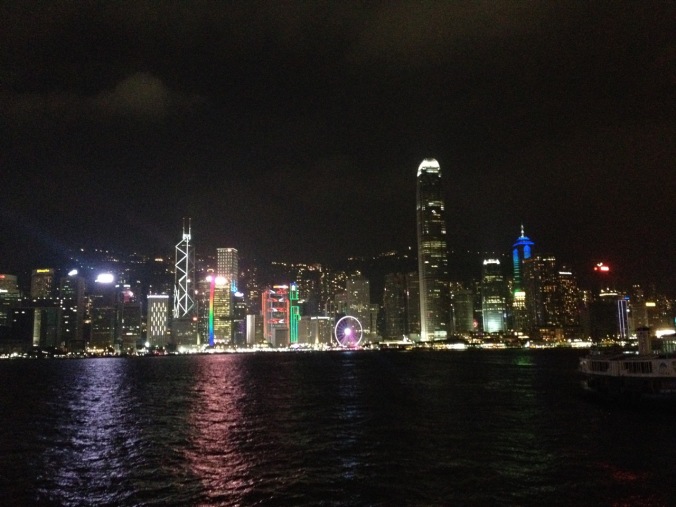 Looking across the water at Hong Kong Island.

In Hong Kong, it’s not just that the buildings are tall or the hills high. The amazing contrast comes from the hills rising so steeply from so close to the city. On Hong Kong Island, the Peak Tram runs up to near the summit of Victoria Peak, with wonderful views along the way. We extended our visit to the top with a walk on the paved path around the hilltop, with views in every direction. There was some haze, but not so much that we couldn’t enjoy the views. Once again, it was the Octopus card to the rescue — we were able to avoid the long queue to purchase tram tickets by bypassing the ticket line and tapping our way through the turnstyle! 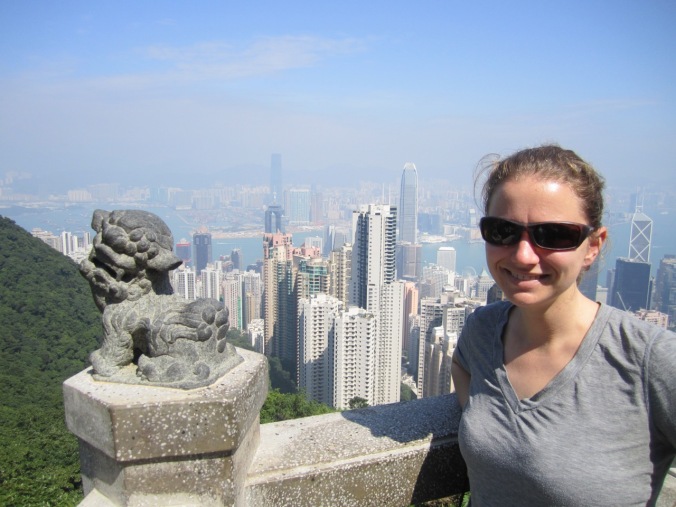 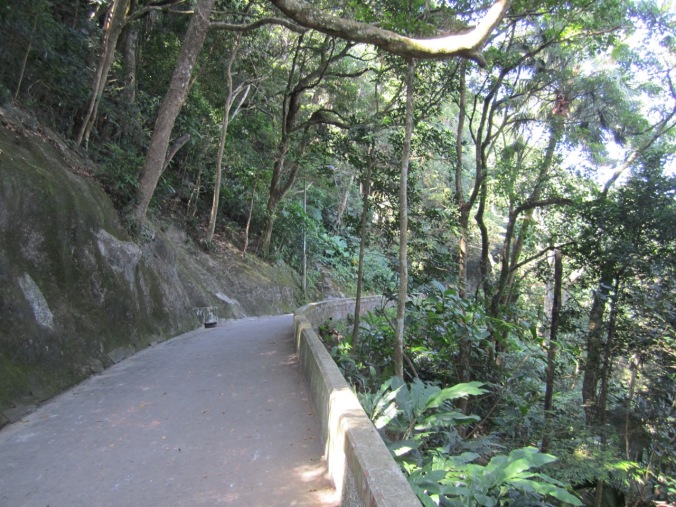 Lovely shaded trail around the top of Victoria Peak. 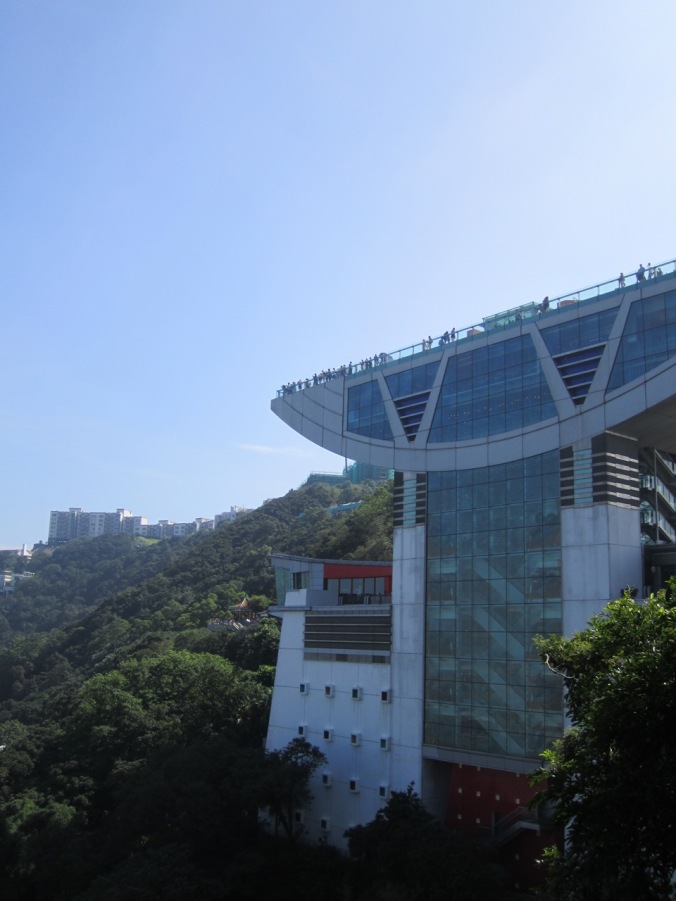 And since it’s Hong Kong, there has to be a fancy shopping center/pricey viewing platform on Victoria Peak, right?

On the Kowloon (peninsula) side, where we stayed, we were further from the hills but close to a variety of tasty food. We sampled congee — a Chinese porridge made with rice — before finding our favorite noodle shop. We also found pizza worth returning to and Mexican food not worth returning to. We explored the local night market, where I bought a luggage tag so that I don’t have to keep filling out the temporary airline tags each time we fly (Elizabeth bought hers at the Xian airport). 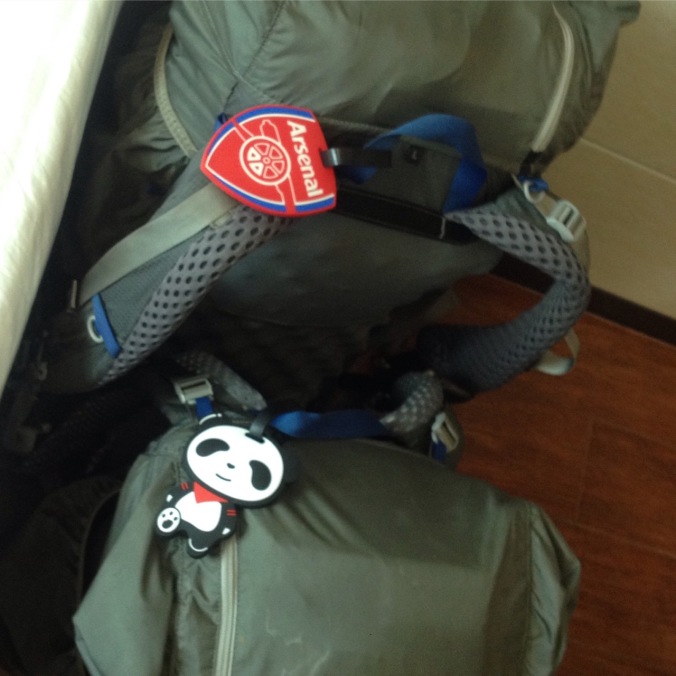 Guess which tag is mine!

Unsurprisingly, Hong Kong also has lots of upscale shopping. And, in order to facilitate shopping in hot weather (and help people get to work), many of the fancy shopping centers and office towers are connected. We got a glimpse of this walking from the ferry to the central business area on Hong Kong Island, where we simply followed the indoor walkways from building to building. Passing the fancy stores, we made our way from the ferry terminal to the Standard Chartered and HSBC Bank buildings several blocks away — the whole time with a roof over our heads. 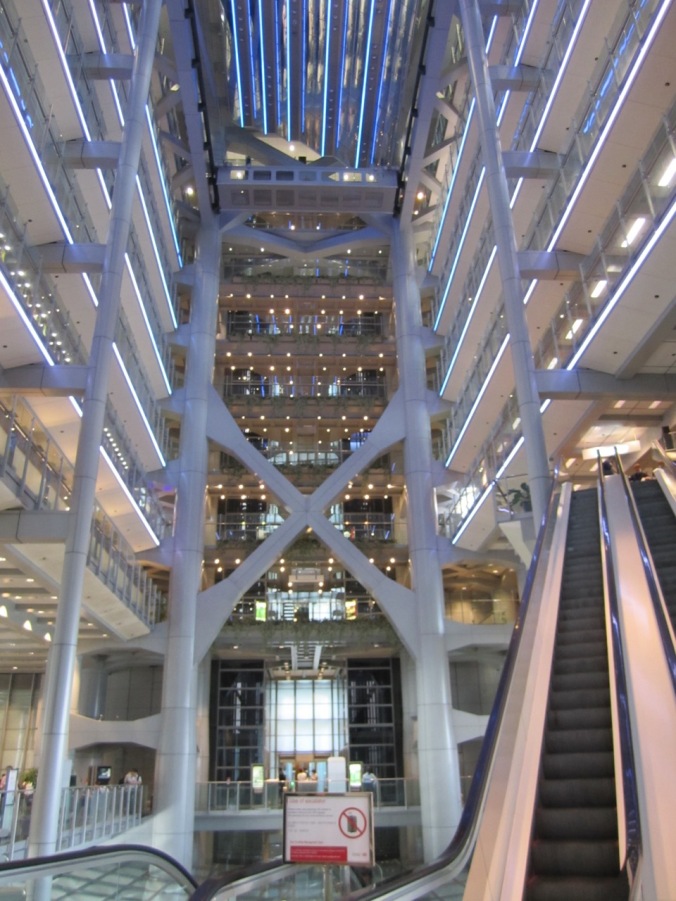 The “Atrium” in the HSBC Bank building. Feng Shui may be hocus pocus, but it leads to interesting architecture.

While we were not interested in luxury brands, we did make use of the shopping opportunity. Elizabeth bought a couple cute shirts at a small store to round out her warm weather clothing, and I bought new athletic shoes. Finding the shoes was quite an accomplishment. In Beijing, store clerks reacted with horror when I asked if they had size 46 (US 11 1/2) shoes. Occasionally they had basketball shoes in my size (Yao Ming influence?) but never a running or hiking shoe. In Beijing, I could take a pass and keep going with my Saucony Perigrine trail running shoes that I purchased in Madrid, since those shoes only had two small holes in them. By the time I was done in Hong Kong, however, they were sporting 4 larger holes and more damage on the inside of the heel. Fortunately, the Adidas and Reebok stores each had some shoes that fit me. I eventually settled on a pair of Reeboks, which will hopefully last until I return to the land of large feet.

Just past the main shopping area on Hong Kong Island are the Hong Kong Zoological and Botanical Gardens — basically gardens and a small zoo. We had a nice time looking at monkeys while most of the other visitors were looking down at their phones. Eventually we couldn’t resist; we looked over and found that they were playing Pokemon Go… right in front of cages with REAL MONKEYS. 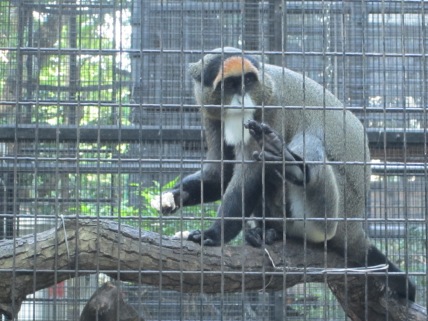 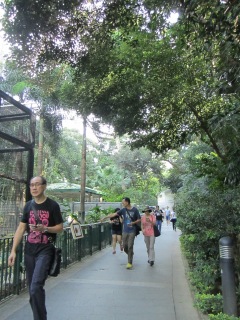 We also made it to the Dr. Sun Yat-sen Museum, near the Botanical Gardens. Dr. Sun was a Chinese revolutionary in the early 20th Century. He became the first President of the Republic of China, though his rule was ended a couple months later by a warlord. Sun was, for years, painted as a capitalist in the official literature of the People’s Republic of China, but is now celebrated in Hong Kong, Taiwan, and Mainland China. There is even a statute of Dr. Sun in San Francisco. I’m a bit of a dork about Dr. Sun because I studied him as an undergraduate at Berkeley, particularly in a class taught by controversial professor A. James Gregor.

We had a chance to see exhibits about his life, including an amazingly entertaining children’s video. The museum building was originally a home for a wealthy family, then a Latter-day Saints (Mormon) Church, and now finally a museum. 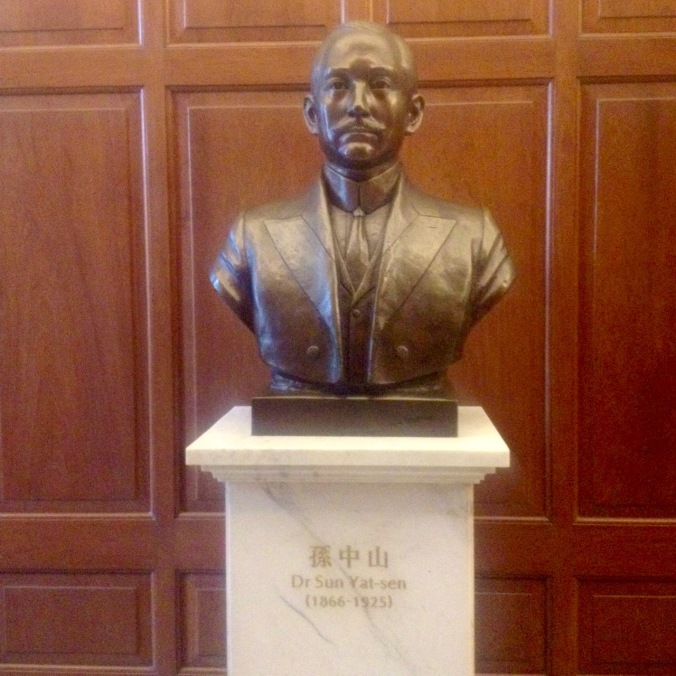 On our last night in Hong Kong, I found the local supporters group for the English football (soccer) team Arsenal. When I went to watch matches with the local supporters group in San Francisco, matches were usually early in the morning (often at 7:00am, sometimes at 4:30am). But an early morning match in San Francisco is an evening match in Hing Kong. I found the bar — Virgo — filled with fans in Arsenal shirts and singing some of the same cheers. There was even a raffle at half time. The fans were exited for the rivalry game — called the North London Derby — against Tottenham Hotspur. It was great to celebrate Arsenal taking the lead 1-0, but more subdued after Tottenham equalized on a dubious penalty. I also enjoyed the good conversation with local fans who were kind enough to speak English so I could be part of the conversation. 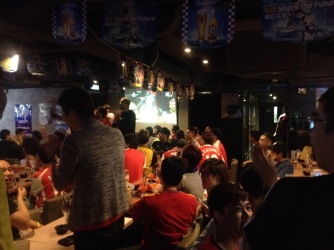 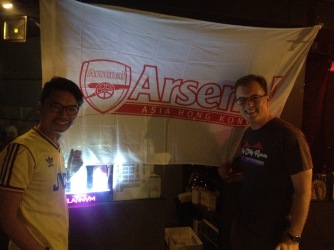 If this all sounds a bit disjointed, it’s because we did a 100 kilometer hike in the middle of our stay in Hong Kong. That’s worthy of a separate post, which I hope to have up soon. We also spent a lot of time trying to figure out where we were going to go next — Yunnan Province in Southern China? The karst-filled Guilin, China? Vietnam? Myanmar (Burma)? The day-to-day planning involved in long-term travel is tiring and our decision about where to go next from Hong Kong would likely impact what our next couple months of travel would look like. And finally, because planning is exhausting and we finally had good internet in what felt like forever, we may have indulged in streaming a few TV shows…

As for the city of Hong Kong, it was one of my favorite places on the trip. The city is lively and crowded but not too pushy. It’s developed so you can find things you want, but still retaining local character. It was just what we needed when we needed it.