Sorry about the interruption; Penang has lots to talk about so I broke it into two parts — mostly because I knew I would be posting a lot of art pictures. You can read Part 1 here. This post continues with the Old City:

The UNESCO-recognized old town in George Town, Penang, contains mostly “shophouse” buildings. For those not familiar, shophouse buildings are long and narrow with the narrow end on the street, an overhang above the first floor, and an open-air light well in the middle. The overhang often makes for a shaded area in front, though it is often used by vendors or to park motorbikes. In many places, the ground floor is a garage or shop with a residence above.

A street of shophouses in the old city. 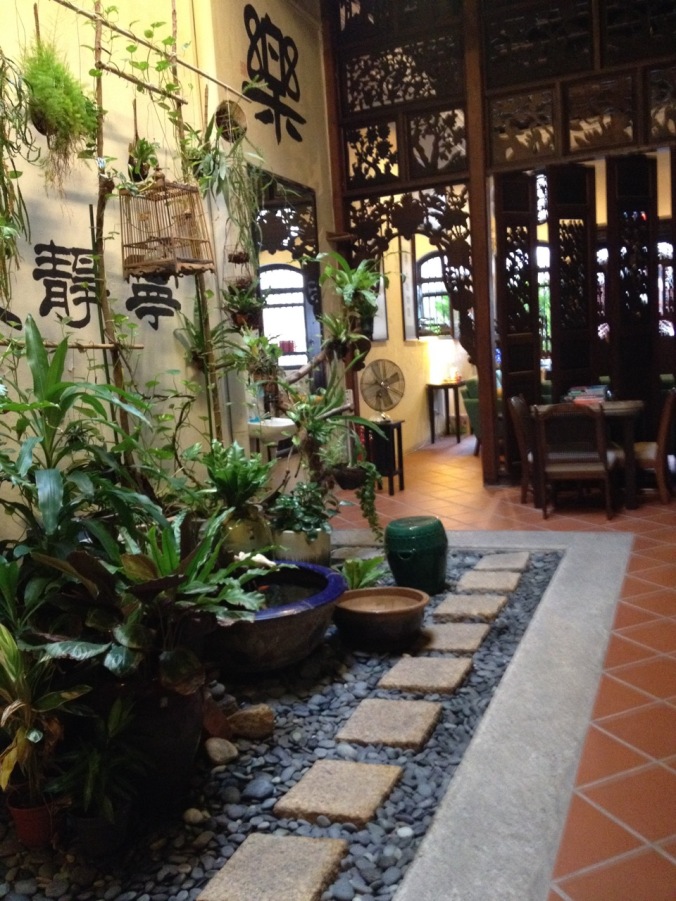 The light well at our second hotel — with a translucent cover for the convenience of guests.

We tried to take the city-run walking tour our first day in George Town, but we forgot to change the time after crossing from Thailand so we were an hour late (in our defense, we had traveled due south, so the time change didn’t make much sense). We went again a couple days later. The guide explained much of the history of Penang, including the role of the Chinese clan-houses, which acted as centers for communities to help immigrant Chinese find their footing. Clans were often delineated based on where in China the members’ families had moved from — with most Straits Chinese able to trace heritage back to Fujian (the province nearest to Taiwan) or Guangzhou (the province nearest to Hong Kong). 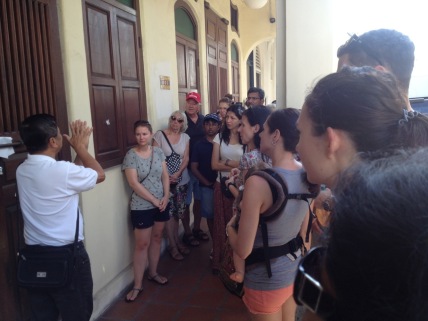 There are also jetties associated with the different clans. We went to these on their own after the tour. These days they seem to be a bit of a tourist trap — think Chinatown meets Fisherman’s Wharf. 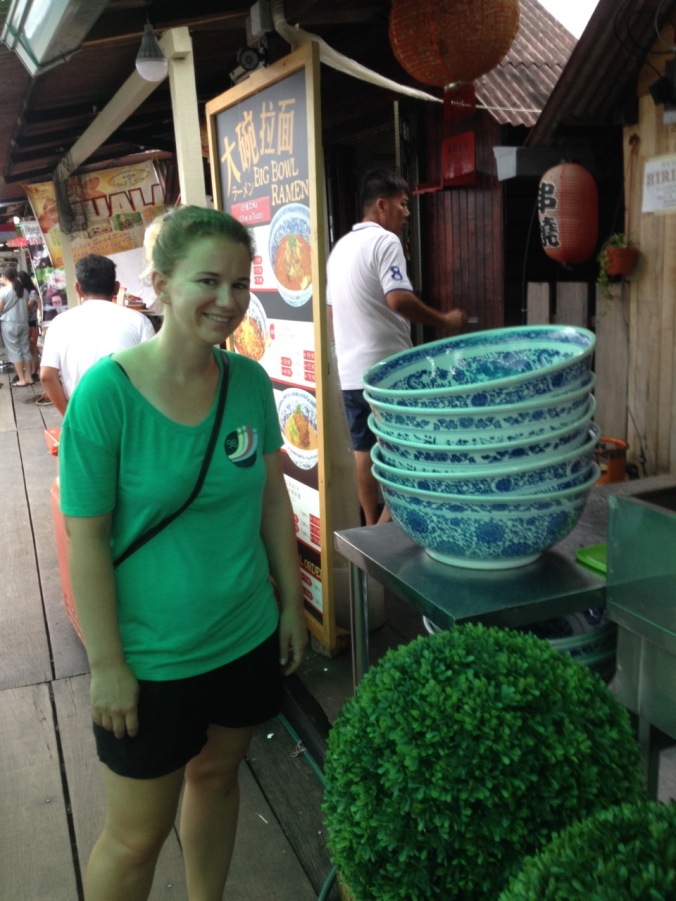 A walk west from the old town leads to the Cheong Fatt Tze Mansion (also known as the Blue Mansion), which is only open via guided tours that are offered a few times a day. The tour is in English but the woman guiding our tour had a very difficult accent to follow (trust me, I’ve been traveling for 9 months, this was a difficult accent), it went very slowly, and was unnecessarily detailed about Feng Shui. But the building is very pretty and if you’re early for the tour there is the “Chocolate Museum” a few doors down where free samples help pass the time. 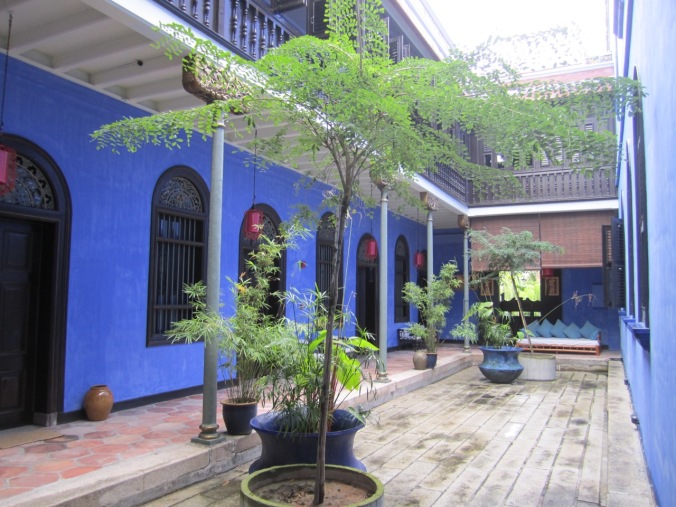 Blue Mansion has blue walls in the interior courtyards. 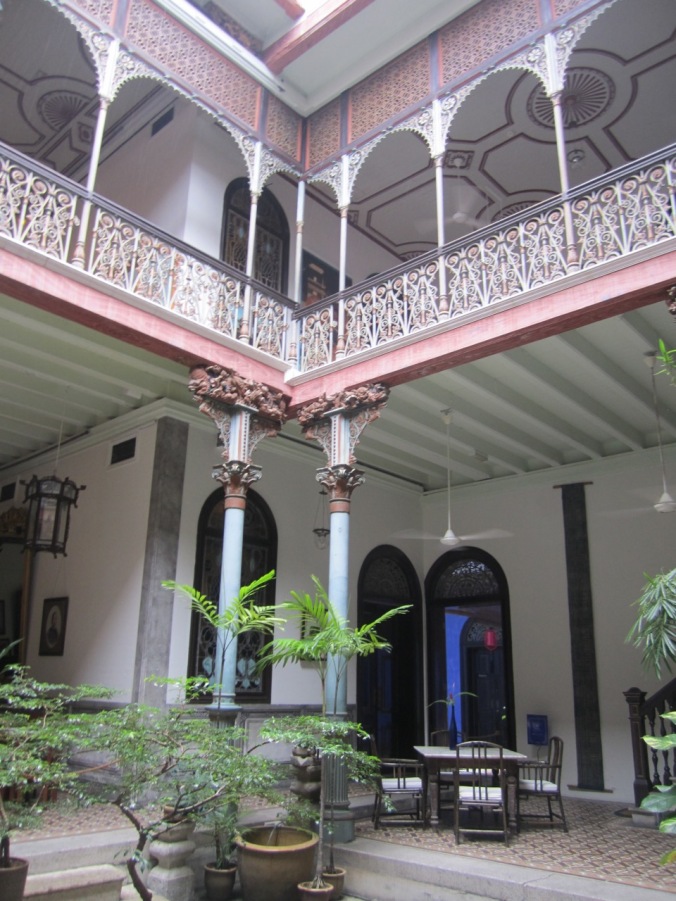 Good Feng Shui in the design. Or so we were told.

Street art at the Chocolate Museum.

In and around the George Town old city there are lots of murals. It appears that the mural painting trend in town was started with Ernest Zacharevic, a Lithuanian artist who has made George Town his home. Zacharevic often includes a physical element in addition to the paint, such as a swing or bicycle. Sizes vary from a small corner to whole sides of buildings. These have become popular and now appear in other parts of Malaysia as well.

There are numerous murals of cats: 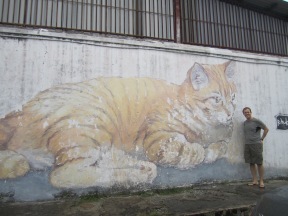 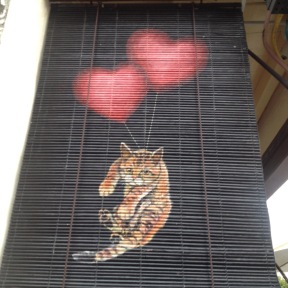 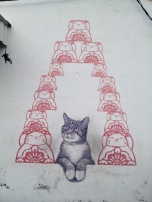 “People” who like to pose with the art includes me.

The murals make exploring George Town particularly interesting because you never know what might be around the next corner.

There is a shop/gallery of Zacharevic paintings in the Eastern Oriental Hotel that we went out of our way to find, but it’s a single room that was closed when we arrived. Not worth the walk. Since we weren’t well-dressed enough to crash the wedding out on the grass, we went back to the old town.

Penang’s architecture tells its story as a trading city. The remnants of Fort Cornwallis remind us of the English presence. And the museum dedicated to Dr. Sun Yat-Sen tells the story of his organizing for revolution in China from his base in Penang.

This is our second visit to a Sun Yat-Sen museum — the first was in Hong Kong. This one focused on Dr. Sun’s work in Penang. Exhibits included tallies of his fundraising from overseas Chinese around the world (he had some big donors in Canada) and a recent movie about his efforts (the revolution will be televised?). The room and table show where he met with his supporters and fellow revolutionaries.

Where they plotted revolution.

And there was even a Dr. Sun Yat-Sen action figure:

All I want for Christmas is a Dr. Sun Yat Sen action figure.

Before arriving in Penang we were advised to rent a motorcycle to explore the island.  Had the traffic been more like Koh Lanta we would have done so, however the traffic was really heavy and, combined with the winding, narrow roads, driving did not look fun.  Luckily, most of Penang Island is well-connected by public bus routes, so we spent three days out of the city.

On the first day, we went to the top of Penang Hill on the funicular railway. While purchasing our ticket for the funicular we pondered why anyone would ever pay double the normal ticket price for an “express” ticket. We discovered the answer to this query after waiting for over an hour to actually board the funicular. Luckily, we weren’t planning to take the funicular back down the hill (the line looked even longer…) — instead we walked down a steep road on the other side of the hill (the signs warned of a 30% grade!). Probably a bad choice to walk the road as it was too steep to be enjoyable and Elizabeth ended up with a bloody knee after stepping onto a slippery patch when a truck passed (we later learned there may have been trail alternatives), but it did drop us at the botanical garden. 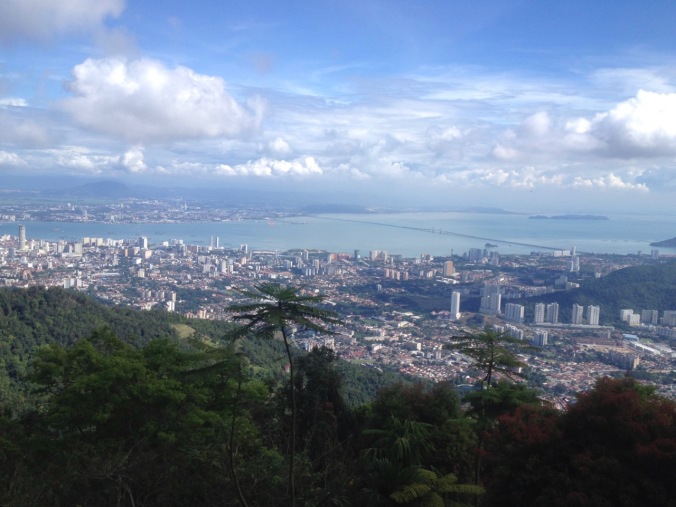 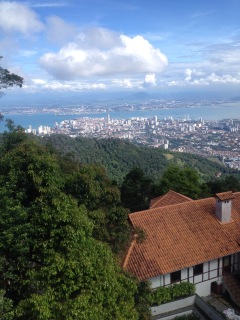 The botanical garden was popular with runners making loops around the park during our visit. Unfortunately the garden was overrun by monkeys, so sitting around to relax wasn’t really an option. 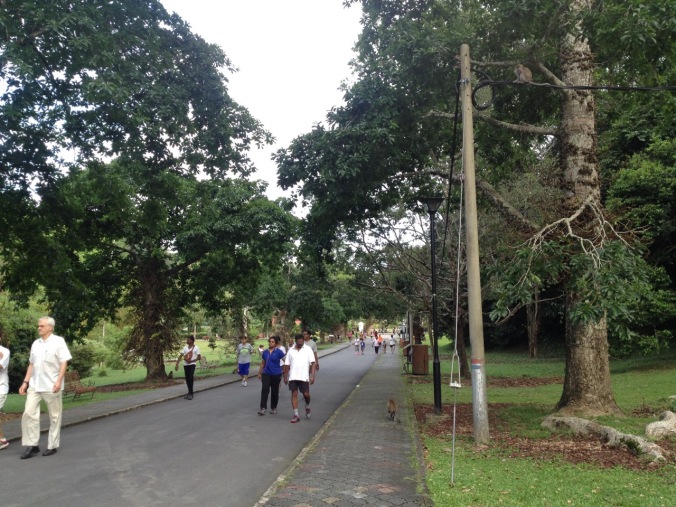 How many monkeys can you spot?

On our second day out of town we visited the Spice Garden, which features many plants from Malaysia and surrounding countries. Signs and an included audio guide told the story of the importance of spices in the years of European colonization as we wandered the well-shaded walking path. And it even included a special garden of poisonous plants.

At the spice garden. Not actually a spice. 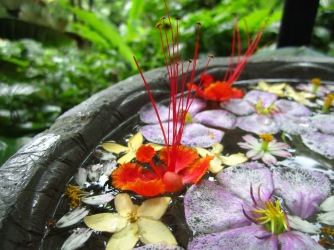 The following day we took a longer hike in Taman Negara Pulau Pinang (also known as Penang National Park).  Starting at the park entrance at the end of the road (and #101 bus route), we hiked to a “lake” and Kerachut Beach (turtle beach). The jungle hike was well constructed and mostly shaded, so while it was still hot and humid, it was better along the trail than in the extremely hot parking area.

The “lake” (actually a wide spot in the river just before it hit the ocean) was a meromictic lake, meaning that it has a layer of salt water above a layer of fresh water. Unfortunately, when we arrived the tide was out so it was empty. 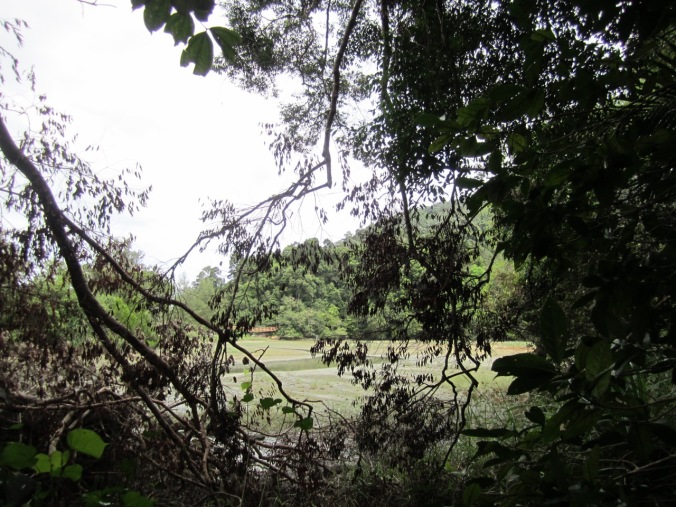 A look through the brush toward the non-lake.

The nearby Kerachut Beach was better, with a nice view. It appeared that the beach is used by locals to hold large BBQs, with people and supplies arriving by boat. At one end of the beach is a turtle exhibition, which housed a few baby turtles in a small tub and a larger turtle in a larger tub. It felt to me like the larger turtle needed more space, but the baby turtles were adorable.

Yes, we went to the mall a couple times. After limited shopping opportunities in Myanmar and the Thai Islands, Elizabeth picked up a new pair of shorts and we purchased a few travel size cosmetics. The mall itself was big enough to have an igloo and manger scene for Christmas. The igloo had polar bears on the outside and penguins on the inside, while the manger scene was… well…. here’s a picture:

Officially a Muslim Country but . . .

Also, from the igloo:

A little flyer at our first hotel alerted us to a weekly “wine soiree” at a restaurant and shop called “That Little Wine Bar.” Being away from wine for most of our trip since leaving Spain, we decided to go for a small splurge. It was a nice opportunity to chat with other wine lovers, including the German proprietor and two English couples living in Malaysia. While we enjoyed the wine and even ordered an extra glass, we liked the cheap street food so much that we headed back to our neighborhood to eat rather than getting food there.

Getting There and Away

Penang doesn’t have a rail connection to the island, so the best connections are by bus. We arrived after an all-day affair of minibuses and transfers from Koh Lanta via Krabi and Hat Yai, Thailand, to Penang. Its a trip that can be booked from many of the shops in Koh Lanta, and works out pretty easily as long as you allow for more time than the vendor tells you (we were told there would only be a single transfer and that we’d get in a couple hours earlier than we did). The (unexpected) transfer in Hat Yai (~2 hours) was long enough to get a meal, and there were additional stops at the border and a gas station somewhere in Northern Malaysia (but not to get gas — go figure). If you take this route, expect to leave early and for it to take all day.

Connections within Malaysia are better and faster. We took an afternoon bus to Tannah Rata in the Cameron Highlands. It reached Ipoh mid-afternoon before being stuck in traffic on the way into Tanah Rata.

Overall, Penang was a unexpected highlight and we ended up extending our stay multiple times.  With great food, abundant street art, and lots to do, the city really should be on the radar of more American travelers looking for something a little different.

3 thoughts on “Penang Part 2: Island of Art and History”