I slept great last night with the sound of the creek in the background and the best part is that we woke up to no condensation!  We set off this morning at the same exact time as Sam and Tam.  It was almost as though we had planned it!  I chatted with them for a bit and then let them pass ahead as I stopped to take some photos. 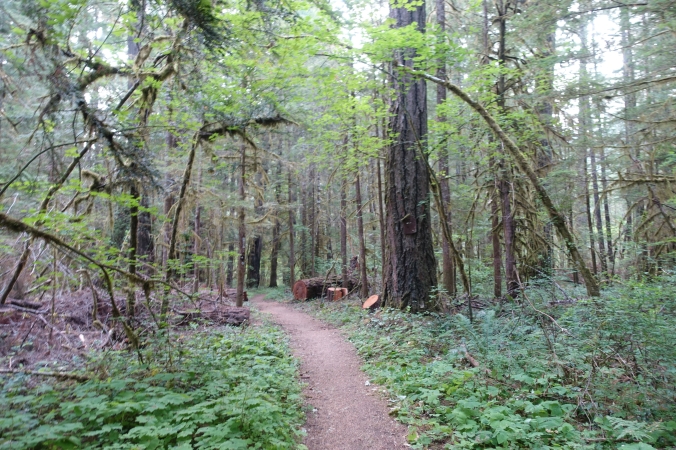 We were off to a relatively flat start for the first 5 miles or so with only a gentle climb.  Even without a tough climb, it still felt pretty hot and humid wearing my long sleeved shirt as I wait for my short sleeved one to dry.  We stopped briefly at Panther Creek for our last water fill in 13 miles.  While stopped, I gave into the heat and switched back to my damp short-sleeved shirt.  With the upcoming climb, I knew it would be wet anyway within minutes.  I was right. 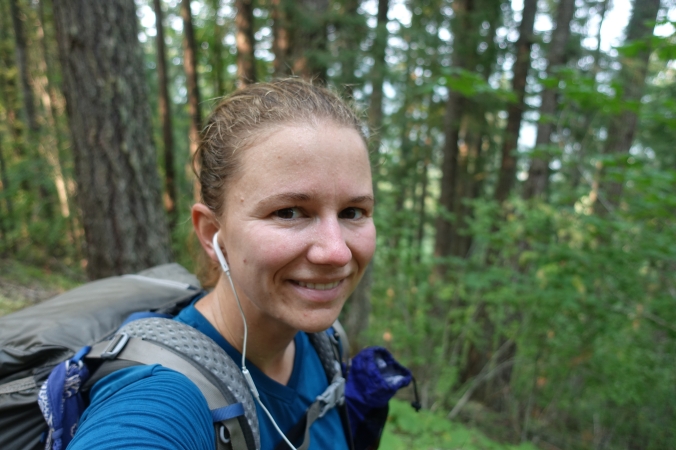 Sweating up a storm!

The trail (and us) climbed about 3000 feet over 9 miles.  We primarily stayed in tree cover, but somehow the landscape feel more open than yesterday’s.  Maybe it’s just that the trees are spread apart more or there’s less brush cover on the ground.  It was nice, but still a little boring.  I’m still waiting for the stunning Washington scenery that I’ve been promised.  We stopped for lunch at a small flat spot about 2/3 of the way up the climb.  After not seeing many people this morning (although I saw the evidence of a large work crew that had yet to emerge from their tents), a few people passed while we stopped, but about half were sobo.  The sobo hikers look so clean and fresh compared to the nobos!  It’s weird thinking back to how I felt after about 450 miles.  It was so long ago… Hiker Heaven.  I remember feeling like a serious hiker at that point, but looking back at myself I realize that I was still such a newbie with no idea of what was to come!

What is an experimental forest?

We continued our climb after lunch, passing the nobo hikers that had passed us while we were having lunch (they were stopped themselves now for lunch), but seeing no one else.  I finished listening to The Help — again, such a great listen, especially over the last few days as we’ve been hiking through a green tunnel.  I continued to slog through a short descent and then was finally rewarded with a couple miles of more level terrain before getting to a flowing piped spring.  Water!  While collecting water, I spoke with a young woman who had thru hiked in 2013 and is now section hiking Washington with enough time to enjoy it.  I understand the motivation.  There’s such a constant hurry with thru hiking because we have to get our miles in each day to make it to Canada in time.  We currently need to average about 23 miles per day to make it to Snoqualamie in time to get back to Oregon to meet Michael’s family for the eclipse.  With this terrain and the weather, that’s a continuing challenge.  It would be nice to take things more slowly, even if it was just hiking a couple fewer miles per day (or not having to worry when we do stop early).  My chat reminded me of the conversation I had with Michael at lunch — would be hike 24 miles today or push to about 29 miles?  Once again, it looked like there might not be a middle option given the terrain and heavy underbrush.  The thru-hiker conundrum.

Later in the afternoon we hiked into an established camp ground with picnic tables and a pit toilet (but no water).  As I approached, I saw a large group of people that turned out to be a boy scout troop that had just finished a 50-mile section hike.  We lucked out and were on the receiving end of a little trail magic — cold sodas!  This wouldn’t help us hike faster, but a cold soda is the stuff of dreams these days.  I couldn’t help but chuckle when they also offered that we could refill our water bottles and warned that the upcoming water sources weren’t ideal.  I appreciated the offer, but I’m honestly at the point where I would rather filter pond water than carry water for an extra 10 miles!  Water is heavy!

We sat and enjoyed our sodas, then added the crushed, empty cans to the outer pocket on our packs (the group had already left and there were no trash cans at the remote campground).  It was about 4:50 when we finally left the campground.  Once again, it was late enough that it made more sense to try to stop at the earlier camping option, which in our case would mean pushing only 3 more miles instead of 7.5 (I really like to stop by 7pm).  Luckily, after hiking those three miles, there was still an open campsite near Green Lake.  I’m not really sure why it’s called Green Lake, as it’s more of a pond.  But at least it was a pond with decent water… it’s not mountain spring water but it still beats carrying a couple more pounds of water on my back.

With yet another early stop today, we’ll need to put in bigger miles tomorrow to give us enough time at White Pass to resupply and charge our devices, while still hiking out in the same day.  Here’s to hoping that the trail gets easier!