My wish did not come true and it stayed warm all night last night.  It was clear that it would be a hot day today before I’d even emerged from my tent.  I was sweating up a storm within five minutes of setting out this morning.  We started out with a big climb, but couldn’t get Guthooks working on my phone to tell me how close I was to the top. 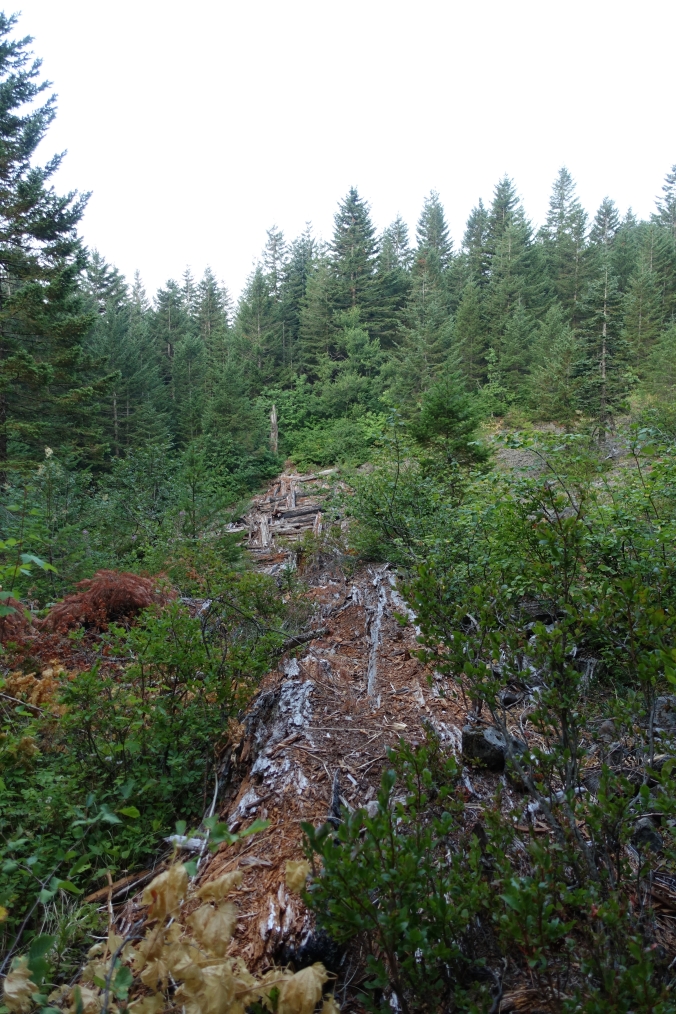 I think this was supposed to be an old railroad housing, but now it just looks like a lot of old logs in a line. 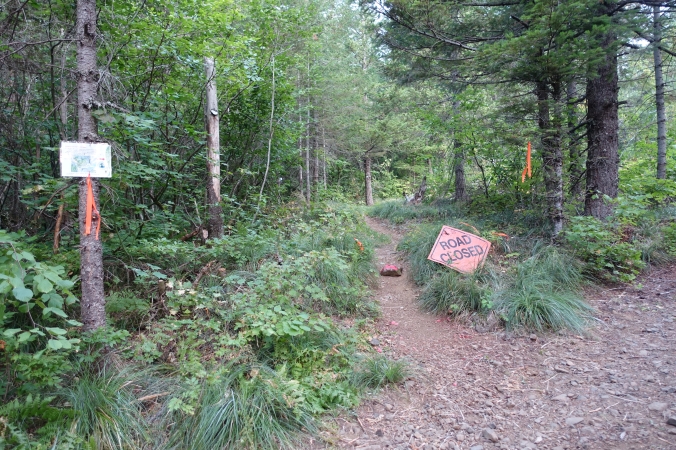 A few miles into the day we had to depart from the PCT due to ongoing logging activity.  We’d seen some notices for the reroute online and also passed several signs over the last couple of days.  The signs indicated that it was a 3.1 mile reroute to skip 2 miles of trail.  This didn’t seem entirely accurate based on how long it took to walk the reroute (seemed like forever), but that could have also been because I was still hiking blind since my phone took forever to locate my position. reroute right now.  Shortly after joining back up with the PCT, I ran into a solo hiker who told me that a forest ranger had told her that the logging detour was no longer required but that no one had taken the signs down.  I’m not sure if this is true, but if it is that’s super frustrating!

Road walk along the logging alternate

It felt like this morning’s climb took forever and then we were finally going downhill.  Other than a few sobo hikers and a couple nobo folks, I barely saw anyone.  Either feast or famine I guess.  But I think I had a celebrity sighting!  One of the sobo hikers looked like Carrot Quinn.  Unfortunately, it took me too long to process why I thought that the hiker looked familiar and we didn’t stop to chat.  When I mentioned it later to Michael he agreed that it looked like her as well, so maybe she’s hiking the PCT again this year?

Michael’s Note & Update: When I posted a picture from August 10 on Instagram (with a location tag), I tagged Carrot and mentioned that I thought we saw her hiking southbound. She liked the photo, so I’m going to say that’s good evidence. That or she really liked my photo.

We stopped to rest, collect water, and eat lunch at Rock Creek.  It was noticeably cooler in the valley, which was a huge relief since I’d been sweating all morning.  I was sure to pick a spot to each lunch well upwind of the bridge that crosses over the creek because it reeks!  Although it appears that the bridge was repaired several years ago, it is still oozing with tar and smells horrendous.

We had another dry climb this afternoon.  This one only lasted about 4 miles, but seemed to be much longer.  Seems to be a trend of our time in Washington thus far.  To help get me through the hot and humid afternoon I listened to the audiobook for The Help.  I’ve seen the movie, but the audio book is really well done and captivating.  I also ran into Twix and Marie during the climb.  I first met them the night before we headed into the Timberline Lodge, so it was nice to see some familiar faces amidst the flow of occasional sobos.

There were a couple of potential viewpoints this afternoon, but they were unfortunately obscured by the smokey haze.  Otherwise, we stayed in the trees and the scenery seemed to vary little from hour to hour.  We ended up stopping early again at Trout Creek.  I scored a great camp spot after another hiker (Hot Thumbs) decided to continue on for the day.  It looked like it was a choice between an early stop or another 5.3 miles to the next camping area (it’s unclear if there is anything in between).  It’s admittedly a little frustrating to stop early because this means that we’ll have to put in bigger days to make it to White’s Pass according to plan, but I also didn’t really want to hike until 8pm today.  My frustration was not eased by the fact that I spilled my alfredo/tuna dishwater all over my short sleeved shirt after dinner (dishwater that I’d normally be drinking per leave no trace principles… yum).  To avoid having our tent become a bear attraction I had to wash it in the creek after dinner.  I doubt that it will dry overnight with this humidity, so I get to look forward to a wet shirt in the morning.

On the bright side, Sam and Tam are camped nearby so we also had a chance to see them again.  It will also be nice to have the white noise of water in the background.  Hopefully we’ll have no condensation to go with it.  The water is moving pretty quickly and it isn’t noticeably cooler here than away from the creek, so we might get lucky.  In fact, it’s still pretty warm and it doesn’t look like it will be cooling down much this evening.  I don’t know how Michael manages to wear his wool base layer on nights like this when I’m hot in just my underwear.  But then again, I don’t know how he falls asleep so quickly either.

We’ll need to do bigger miles tomorrow to stay on track.  Hopefully it will be cooler and less humid!  So far, Washington feels like it’s just been one big sweaty uphill hike with no views — I can’t wait until we get out of this and into the Washington that people are always raving about!

Panoramic Trail in the fog on Sunday afternoon
It’s difficult to photograph the color of everything when smoke turns the world orange. Today is crazy. The only time I’ve seen similar was in the Jefferson Wilderness, when we accidentally hiked into the fire and turned around. But it was clear (or just a little hazy) only a few miles away. Now it’s orange all over Northern California.
Thru-hiker sit-stand desk during Shelter-in-Place.
I think this means we completed the #pacificcresttrail in 2020!
At the request of the Bar Association of San Francisco Barristers’ Club, here is the Tiger [King] House in Haight Ashbury.
We just went shopping at the @zazie_sf farmer’s market. No line, fresh produce, and help for a local business. Door to door was under 20 minutes. It is more expensive than Safeway but much easier and in the neighborhood. I recommend it, especially if, like us, you are lucky enough to be busy with work from home and it’s tough to find time to wait in line to go to grocery stores. #zaziesf