Well, another day that didn’t quite go as planned…  We started out this morning in what felt like a foggy haze.  I’m assuming that it was smoke from the Eagle Creek fire, but with fires both north and south of us now it’s hard to know for certain.

Our first couple of miles were all downhill.  We had a great view of a large waterfall in the distance, otherwise it felt like we were walking through an area that has seen a lot of erosion/rock slides.  Lots of exposed dirt cliffs!  After a few miles we hit the Sandy River (with a name like that we figured we wouldn’t be grabbing water from this source).  I’d seen some mixed info about how hard of a crossing it was, so I was pleased to see that it wasn’t the fast, thigh-high crossing that was reported.  Just a log crossing!  And by “just,” I mean that the logs were relatively narrow and I was super happy to have my poles, but I made it across with dry feet.  I’ll take it as a win. 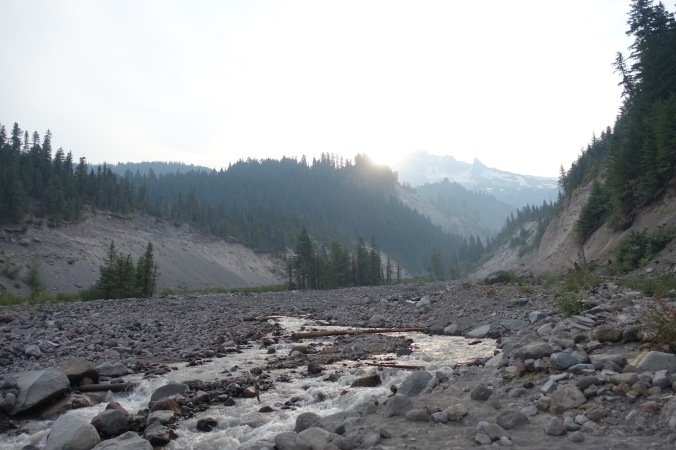 Shortly after the river crossing, we came upon the junction for the Ramona Falls trail.  I’d heard that this trail was a popular alternate that didn’t really cut mileage but took a much more scenic route.  We’d decided to take the alternate since we won’t be able to take the Eagle Creek alternate and I wanted to see some nice waterfalls.  I was surprised to see a notice posted that explained that this used to be the official PCT route, but that it wasn’t open for equestrian use.  It’s too bad that it isn’t still the official hiking route because the alternate was awesome! 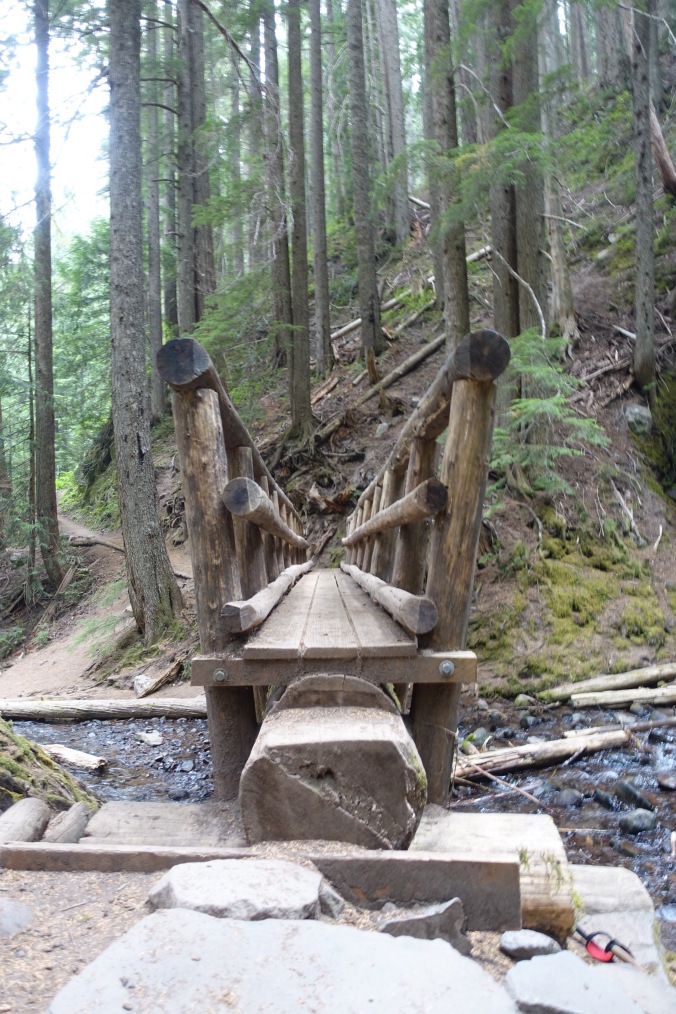 The falls were beautiful, but even more amazing was that it seemed like we’d entered a completely different ecosystem.  We went from a dry, tree-covered environment to what felt like a rainforest!  There were lots of mosses and the trail closely followed a bubbling stream.  It was a magical couple of miles that really helped to re-energize me!

We stayed in a rainforest-like environment for a little while after rejoining the PCT and crosse one of the more unique log crossings we’ve encountered on the trail thus far.  It was basically a couple of large logs stacked on top of each other and we had to shimmy across the lower log while holding onto the upper one.  Michael wasn’t a fan.  Although that pretty much describes his feeling about most log crossings 😉

The rainforest didn’t last for long and we were soon back in the (normal, drier) trees.  The rest of the morning and afternoon sort of went by in the blur.  After a few more miles of climbing and then descending, we were able to cruise for awhile on much flatter trail.  We could occasionally make out views of Mt. Hood behind us and Mt. Adams in front of us, but with all of the haze it really put a damper on the views.

We arrived at the junction for the Eagle Creek trail at around 6pm.  Although the trail was closed, we’d heard that it was still permissible to hike a few feet down the trail to get water at the spring, so we had planned to grab water there for the evening.  When we arrived, there was a group of PCT hikers (including Sam and Tam again!) and a ranger there that seemed to be patrolling the fire closure and making sure that the hikers didn’t enter the closure zone.  We’d known that the campsite right at the junction was closed due to the fire and that we couldn’t camp at another campsite along the lake. 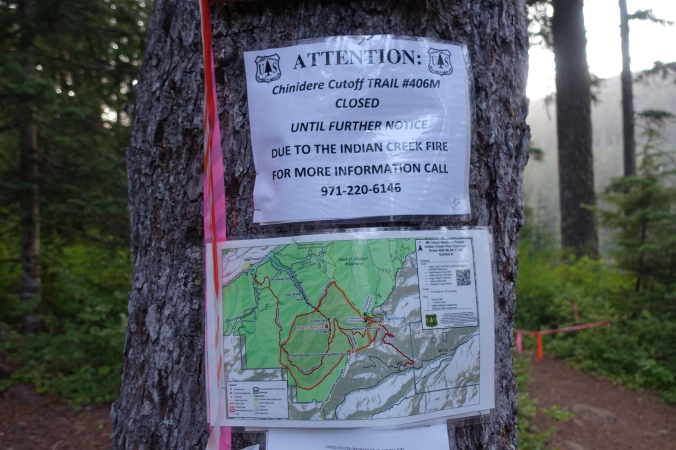 What I didn’t realize was that we were required to hike past the lake before we were allowed to camp.  We were already over 25 miles into our day and this would mean hiking at least another 5 miles — not fun!  I really wish that the forest service would issue clearer closure notices that would also reference PCT milage numbers to avoid this type of confusion.  What was clear was that the ranger was going to be sticking around to make sure that the crowd of PCT hikers hanging around the junction hiked on and didn’t camp there for the night.  While most of the hikers there opted to stop and eat dinner at the water source before heading on, the threat of needing to hike another 5 miles (and competing with the crowd of hikers for available camping spots) was motivation enough to hike on.  To say that I was not a happy camper at this point is probably an understatement.

It quickly became apparent that there weren’t any camping options between the junction and the lake as I had originally hoped, so I guess that was never a real option.  I couldn’t help but notice that there were already several hikers camped out along the lake (where camping was prohibited under the fire closure order), but we continued on.  As soon as we passed the lake area, I kept my eyes peeled for a flat, clear spot in all of the undergrowth.  I was relieved to finally find one right at the 30-mile mark for our day.  I’m exhausted.  Hiking until 8pm isn’t exactly my cup of tea (and neither is waiting until then to eat dinner), but it seemed that we were left with no choice today.  The good news is that it means that we’ll have a shorter hike into Cascade Locks tomorrow!  I guess we’re finishing out Oregon with a bang.  It’s hard to believe that we’re almost done with the state and into Washington!