Day Four: We headed out of Pamplona early with the intention of putting in a big day.  We started by walking through Pamplona’s suburbs before climbing almost 1000 feet.  At the top of the mountains, we were greeted by a series of windmills (and the corresponding wind).  A wrought iron monument shows medieval pilgrims battling the wind on the way to Santiago with the inscription: “Donde se cruza el camino del viento con el de las estrellas” (“Where the way of the wind crosses the way of the stars.”). 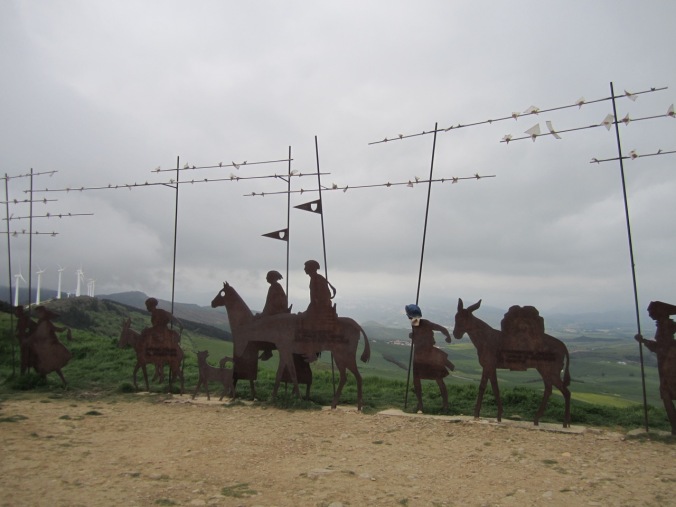 Looking down at the valley below.

Back down in the valley floor, we opted to detour to the Church of Santa Maria de Eunate.  The 12th Century church is linked with the Knights Templar and has a simple, but beautifully calm interior and a surrounding porch.  There were several non-pilgrims inside praying and a separate group outside preparing what appeared to be a tasty feast!

Exterior view of the Church of Santa Maria de Eunate. 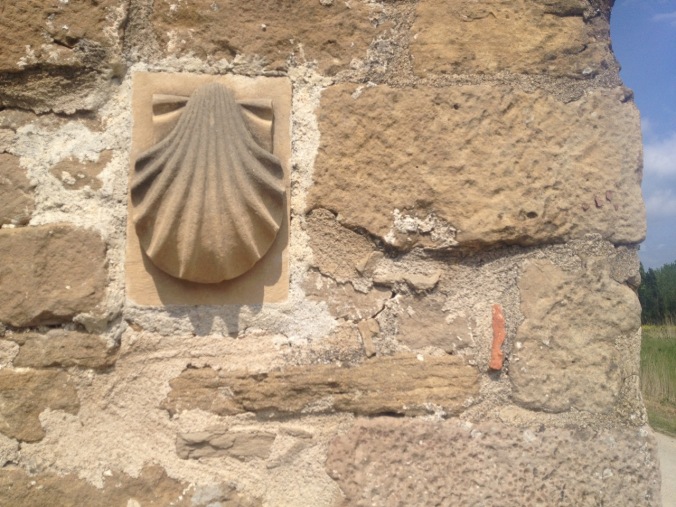 The scallop-shell on the exterior of the church marks it as a stopover on the Camino. 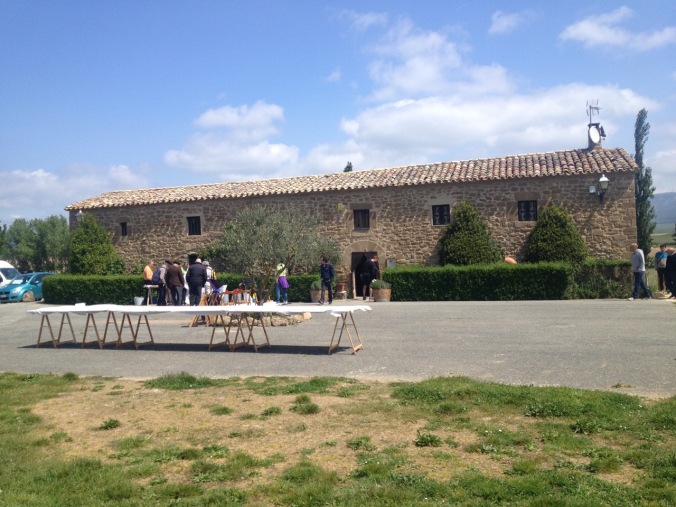 Preparing for a feast at the hermitage building next to the church. Just like a pot luck!

Once we were back on the Camino, we stopped for tapas in Puente la Reina.  The town is designated as the end of “Stage 4” by Brierley, but it was still relatively early and we decided to push on another 8 km or so to Cirauqui (for a total of about 21.5 miles).  Like many of the towns that we pass through on the Camino, Cirauqui is best described as a small, seemingly abandoned village on a hill.  We stayed at the sole albergue in town and joined the group dinner run by the albergue.  Unlike some of the pilgrim meals, where wine is included but limited, our host continued to check on our pitcher of wine at dinner to make sure that we were getting enough to drink (and encouraging us to eat more salad and pasta as well).  Once again, there was a family connection between the albergue and the winemaker!

Passing by one of the region’s many vineyards (part of the Navarra region). 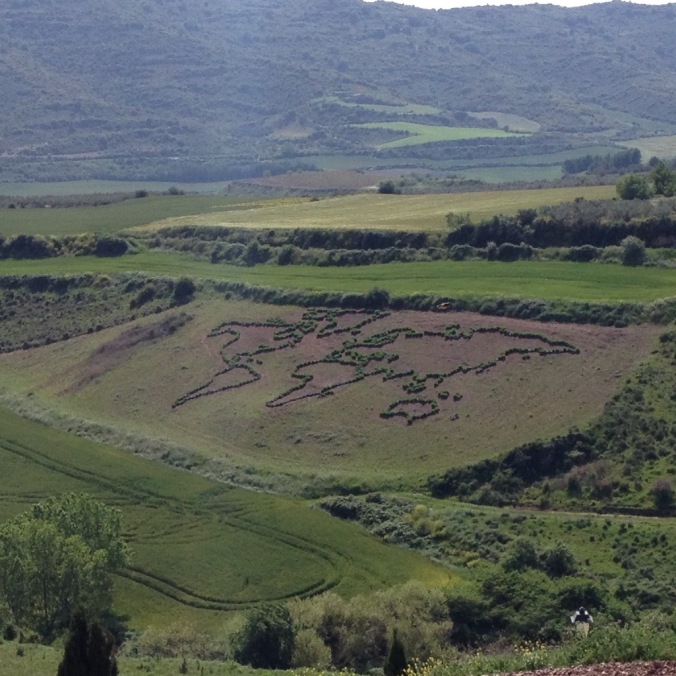 Someone spent a lot of time cultivating this map of the world on a nearby hillside.

Day Five: We planned another long day and passed quickly through the first couple of towns until we arrived in the small city of Estella (about 14km down the road).  In Estella, we stopped in a bar/restaurant for breakfast and marveled at the number of locals enjoying their (presumably) first glass of red wine at 9:30am.  Just a bit further down the road, we passed through the town of Irache, best known for its fountain.  Now, many of the small towns have public fountains with drinking water for pilgrims, but Irache’s famous fountain has one handle for water and a second handle for wine! It is sponsored by a local winery and was good (at least that’s what we thought while hiking).  Quite the morning treat!

We spent much of the remaining day on an alternate “green” route that went up through the hills on dirt tracks instead of following along the road.  It provided a peaceful alternative to the masses of pilgrims that we encounter each day on the Camino — over a couple of hours we only saw two other couples (and a horse) instead of dozens of people.  We ended the day in Los Arcos (the end of Brierly’s “Stage 6,” meaning that we did three stages in two days) and stayed at an Austrian-run albergue with lovely gardens and common areas (and a friendly black lab). 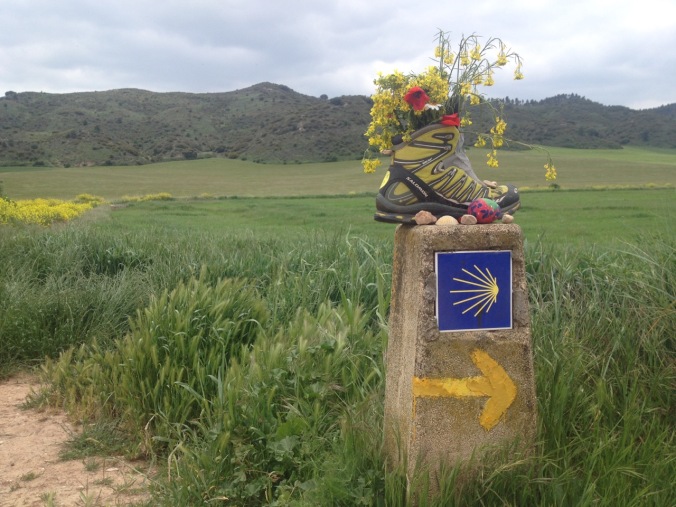 Day Six: With two long days behind us, we decided to take it easy and stick with the designated 27.8 km stage into Logrono.  Our morning was filled with a series of hilltop villages before we stopped to breakfast in Viana.  We were greeted in Viana’s cathedral by a hilariously talkative volunteer and also enjoyed the nearby ruins of the Church of San Pedro.

One of the many hilltop villages we passed through.

The entrance to the cathedral in Viana.

A couple hours later, we were similarly “greeted” as we approached Logrono by the daughter of a legendary gatekeeper of the Camino.  We had been led to expect that there would be a stand with figs and water to accompany her pilgrim credential stamp that reads “higos, agua y amor” (“figs, water and love”).  Alas, there were no figs, no water, and she spent the entire time that I was getting my stamp in what seemed to be a heated argument with her husband!  A memorable stop nonetheless.  Logrono proved to be a fairly sizable town, and we enjoyed tapas, beer, and ice cream along the main square.

The entrance to the cathedral in Logrono.

After six days on the Camino, our feet are still blister free (but tired).  We’ve noticed that the Camino seems particularly busy (as least compared to my 2012 experience). This means that we can’t walk late into the afternoon (as we did on the JMT) without risking showing up in town and finding that all of the accommodations are already full.  To deal with this, we’ve been waking up early each morning so that we can comfortably fit in our miles by 1pm or so.  In the future, we may book ahead to allow us to walk further into the day, but on the whole we prefer the accommodations that are first-come-first-serve.