Day Zero: We lucked out on our way to St. Jean Pied de Port (the unofficial, but popular, starting point of the Camino) when we found another traveller (Sam, from Minnesota) willing to share a taxi from the Pamplona train station.  Although it ended up costing a few euro more than taking the bus, we got into St. Jean about four hours earlier because we didn’t have to wait for the bus.  Our first stop was the Pilgrim’s office (which likely would have been closed for the day had we waited for the bus).  Everyone who walks the Camino is referred to as a Pilgrim (or “Peregrino” in Spanish) and is greeted over and over again during the day with the greeting “buen camino.”  At the Pilgrim’s office we registered and received our Pilgrim’s credential.  The credential is stamped at various establishments, is required to stay in many of the albergues (hostels for Pilgrims), and entitles Pilgrims to certain discounts at various cathedrals and sights along the way.  The rest of the day was spent exploring St. Jean and finding provisions for the next day’s walk. 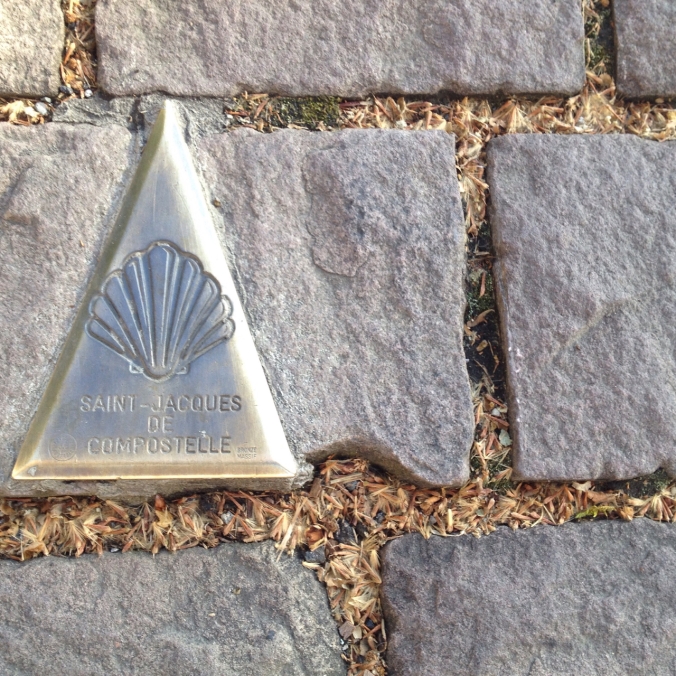 Placards in the cobble-stone street marking the way.

Day One: We were up bright and early (5:45am), although we not the first ones up in the albergue.  Breakfast at the albergue was simple (bread and jam), but enjoyable if only for the stern (but very lovable) woman who ruled over the kitchen and wished everyone a “buen camino” on their way out the door.  The first day of the camino is known for its climb through the Pyrenees mountains.  We felt right at home as we climbed up the mountain (easier than the Sierras!) and were treated to amazing views (and only light rain)!

As we climbed up above the clouds, the hills appeared to rise up as little islands.

Getting ready to head out again after stopping for tea.

There were so many slugs!

We ended the day in Roncevalles, in part because it was the end of the stage in the Brierley guide to the Camino (which most English-speakers use) and because it is a historic stop on the Camino.  The stop ended up having a very weird feel to it.  We arrived before the albergue officially opened at 2pm and the administration of the albergue felt very bureaucratic compared to my prior experience on the Camino in 2012 (and the cold showers did not help matters — apparently the hot water was off until about 5pm).  The albergue also felt very isolated, although when we discovered the bar at a nearby hotel (that the albergue failed to mention existed), we happily enjoyed a bottle of wine to pass the time before our 7pm group dinner.  Following dinner, we enjoyed mass at the on-site church (but were confused to find that communion included no wine! As non-Catholics, luckily no communion papers were requested 😉 ).

Day Two: After the climb on day one, our second day started out reasonably flat before descending into Zubiri.  Much of the day was through forested land with good, dirt trails.  We stopped for tea and grocery shopping in the small town of Viskarret before tackling a small ascent in preparation for the big descent of the day.  A food truck and a short downpour greeted us at the top, meaning that the descent was a bit slippery at times (we passed one bicycler who had opted to walk with her bike and witnessed another completely wipe out on another slick turn).  We ended the day in Larrasoana at the municipal albergue, which was further than the recommended stop in the Brierley guide, but we wanted a short day three leading into Pamplona to maximize our time in the city.   The highlight of Larrasoana was a happy shop owner offering free samples of his family’s wine (and sampling himself), so of course we had to buy a bottle (for a whole 4 euro!). Michael also enjoyed the four barn cats who visited the back patio of the albergue, one of which knew how to open the door. 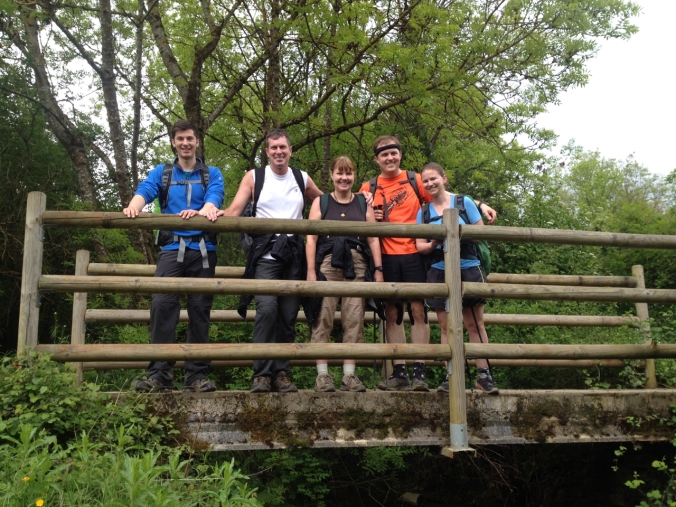 We stopped to take a group’s picture and they insisted on taking ours as well.  At the time, we were walking with a guy from Edinburgh and a couple from Boulder, CO. 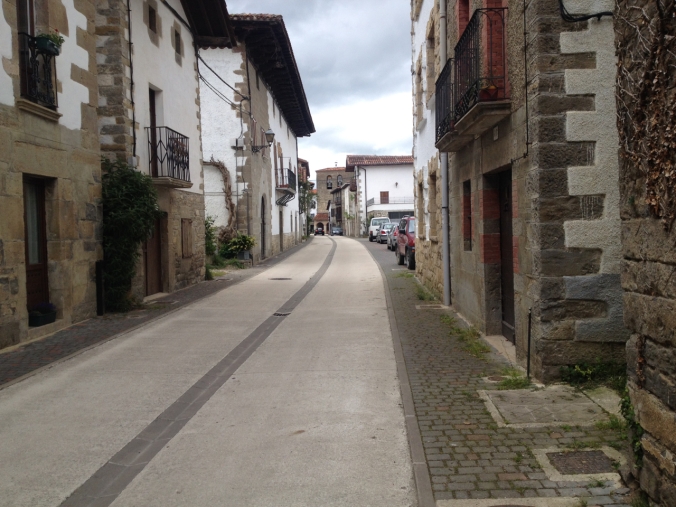 The quiet streets of Larrasoana.

Day Three: The highlights of our short hiking day into Pamplona were the pen of miniature horses (so cute!!) that we passed and our decision to take an alternate route into Pamplona through one of the parks instead of via city streets. 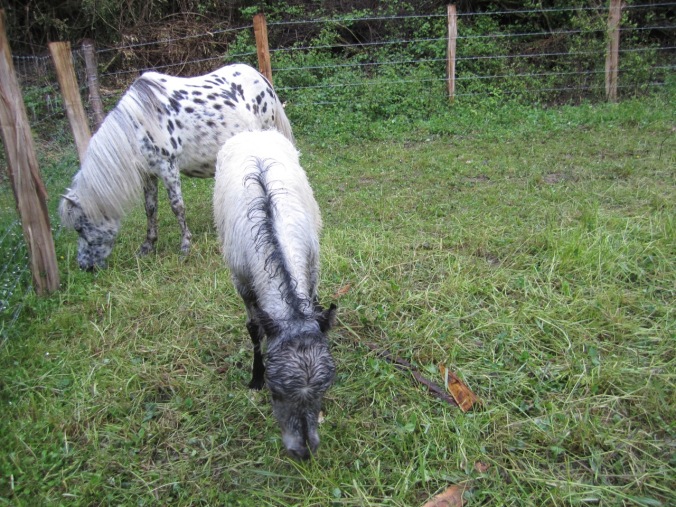 Miniature horses!  There were a bunch and they were adorable.

Bridge leading into Trinidad de Arre.  We bypassed the town to take the scenic park-route into Pamplona.

The branches of the trees have grown together so that the trees are connected over the walkway.

We ended up getting into Pamplona by about 10:30am to find that all of the private albergues were already full due to the convergence of a triathlon, local festival, and food festival that day.  This meant waiting until the municipal (first come, first serve) albergue opened at noon.  While waiting, we were treated to performances by the gigantes (giant, um, just look at the picture below) celebrating the local festival — what a treat!  Check out our short video of the dancing gigantes here.  We spent the afternoon visiting the Navarra Museum and Pamplona Cathedral before getting a group together to watch a major soccer match at a local bar.  Dinner consisted of amazing tapas from an award-winning tapas joint (my favorite was the foie) and chocolate con churros (yum!).  Pamplona ended up being a great spot to spend the day, especially given the many festivities going on in town.

Los gigantes in Pamplona.  These guys spent the entire day walking through the city streets performing. 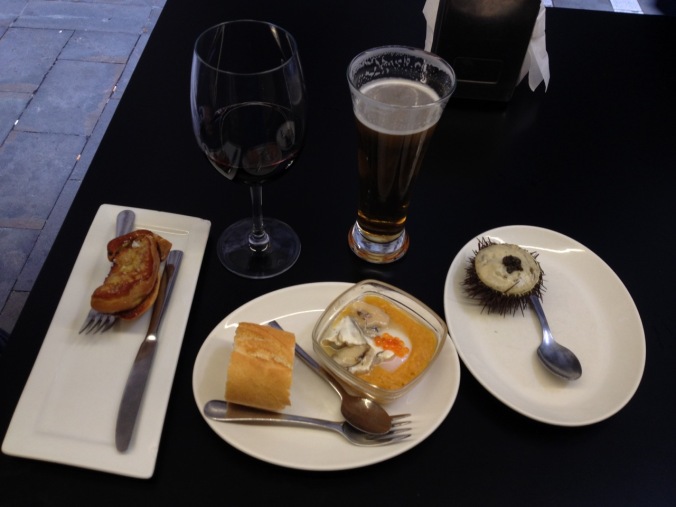 Some of our tapas: including the foie (left) and sea urchin (right).

Overall, after three days on the Camino we are feeling pretty good.  Our feet are tired and we are a little sore, but no major issues thus far!