Today was awesome!  Probably one of the most beautiful days that we’ve had on the trail.  There were so many magical moments — my day in Three Sisters Wilderness is not one that I’ll soon forget!  I couldn’t stop taking pictures, so this will be a photo-heavy post. 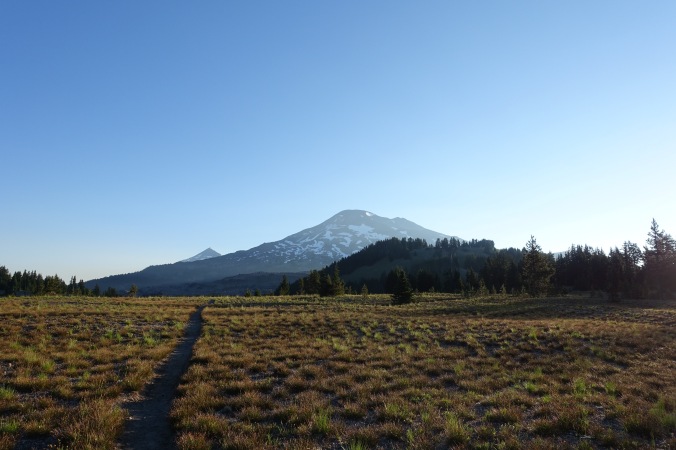 We had a little haze throughout the day, but otherwise it was beautiful!

We began the morning hiking through a series of valleys sounded by rocky outcroppings and views of nearby snow covered peaks (none of which I ever identified, but probably the various sisters?).  Small seasonal streams flowed through the valleys and twinkled in the early morning sunlight.  The morning was actually fairly chilly, which we haven’t really had to deal with recently.  We did have patches of trees, but still lots of exposed areas for views.  It was a great change of pace! 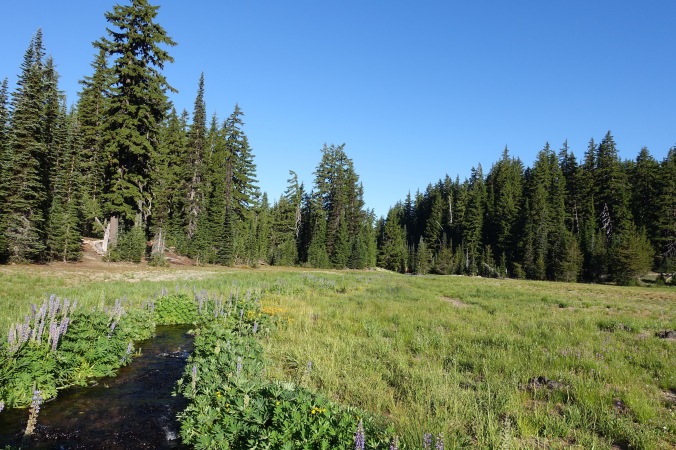 One aspect of the valleys that was impossible to capture in photos as we passed through was that they were filled with butterflies.  As we walked, huge clouds of butterflies would rise up along the path.  Between the butterflies and the wildflowers, it felt like such a special place to be.

Michael’s Note: I took a video of the butterflies as I walked through them. You can watch it here.

After a few hours passing in and out of the valleys, we entered into a section of forest that instantly struck me as special.  I don’t know what it was, but it just felt like a mystical bit of forest.  I guess I’m not the only one to think so either, because the forest was part of a special protected zone.  I had my headphones in when I got to the forest, but instantly turned off my audio so that I could just soak it all in.  Near the edge of this forest was a lovely waterfall that crashed down onto shards of sparkling obsidian.  I had planned to go a little further before lunch, but couldn’t pass up the spot to spend a little more time. 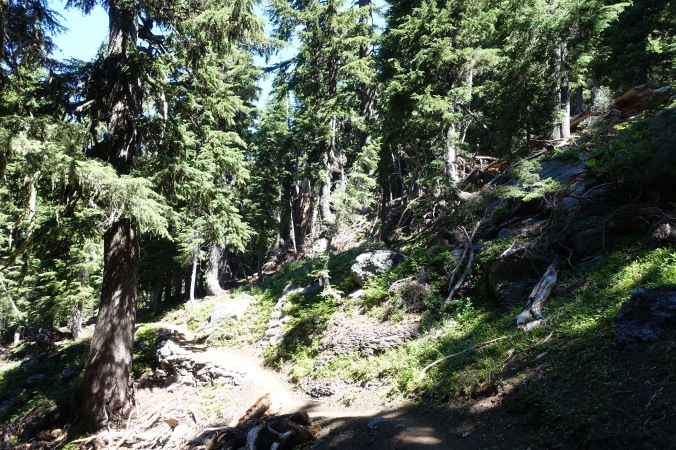 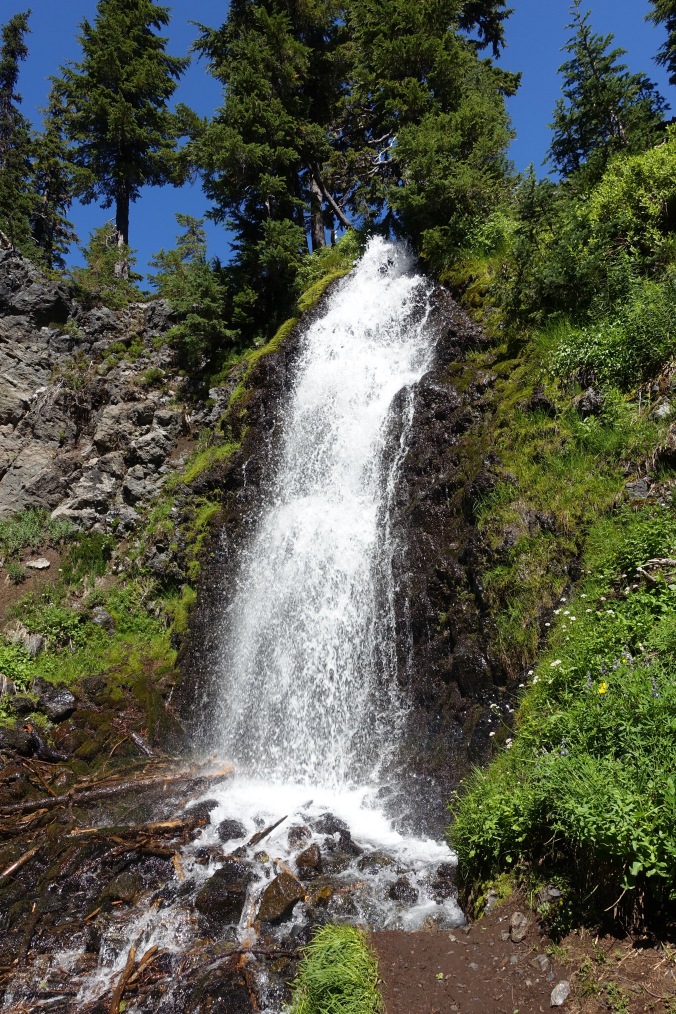 My photo doesn’t capture it, so you’ll just have to trust me that the obsidian sparkled underneath all that water! 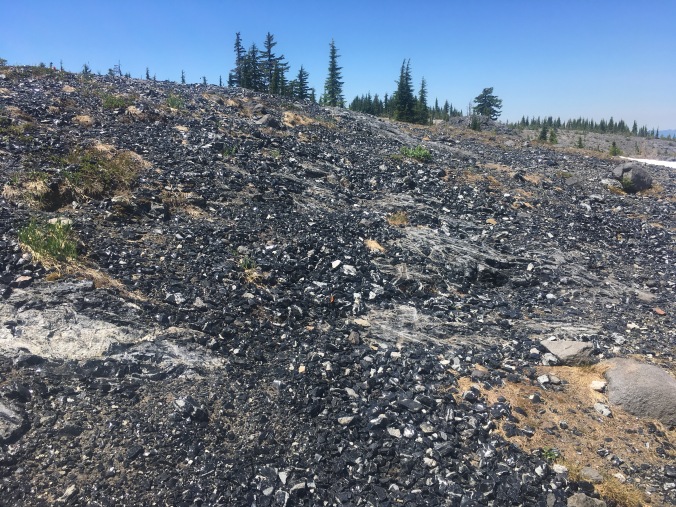 Obsidian on the ground near the waterfall.

I think that I encountered my first true southbound (sobo) hiker today (as opposed to people who flipped from the Sierra).  The waterfall was down a very short spur trail, but I watched this guy rush past without pausing for even a moment to take in the beauty of the falls.  It was a pity since this was such an awesome spot.  Michael caught him down trail a few minutes later and confirmed that he was a sobo. 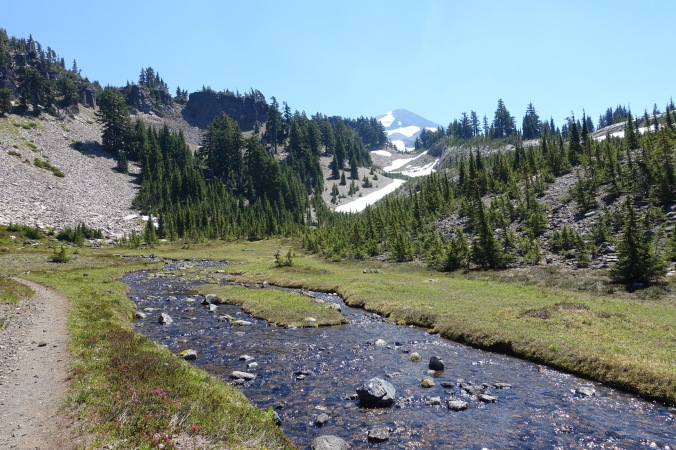 I couldn’t believe that there was still snow out on the lava rock. It was hot!

Checking out the switchbacks that I’d just climbed up.

After lunch, the scenery started to change and we encountered more volcanic features.  The trail switchbacked up a pile of volcanic rock — not the fastest thing to walk on, but at least much of the trail was crushed rock instead of scree.

Following the volcanic rock, I found myself back in a huge field filled with fragrant wildflowers.  You can almost smell these valleys before you get to them.  Not a good place for an allergy sufferer, but I’m loving it! 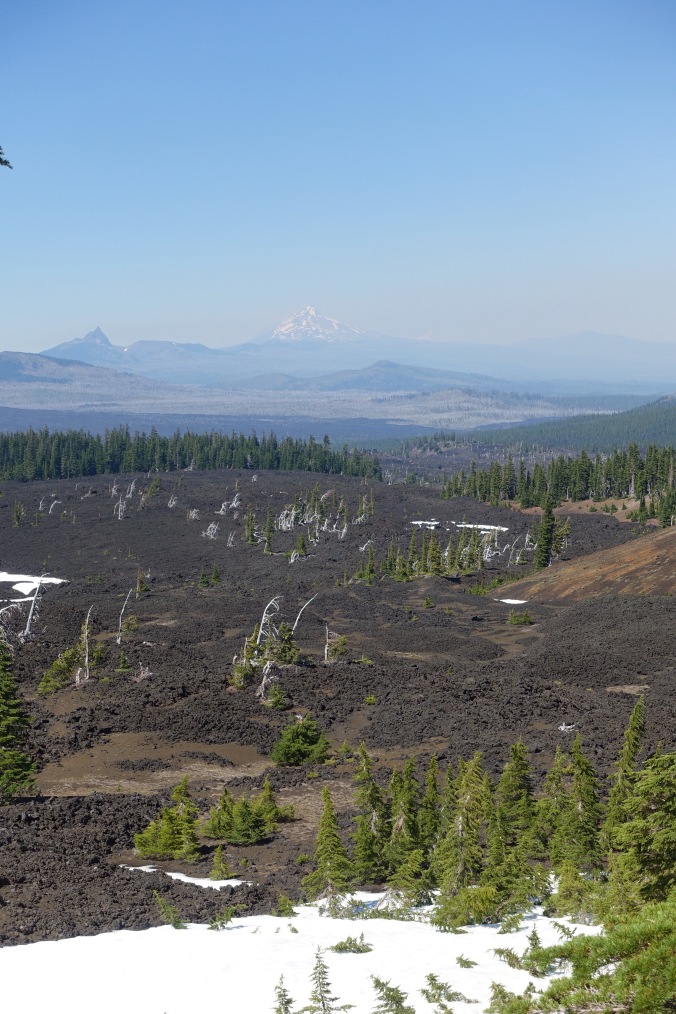 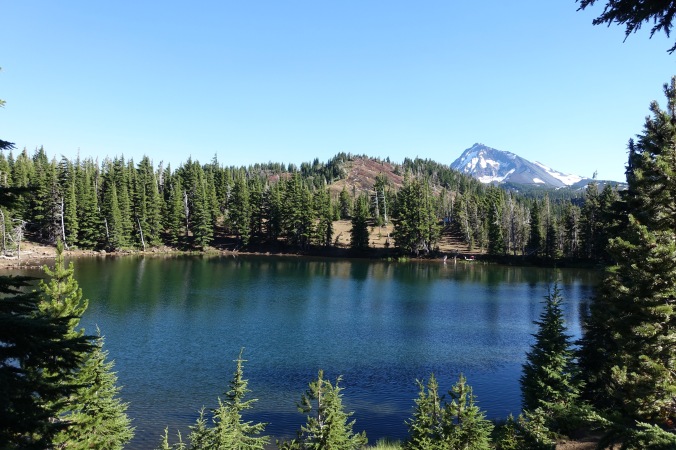 Continuing our trend of taking full advantage of the many lakes we’re seeing along the trail, we stopped for an afternoon swim at South Matthieu Lake.  The lake is part of another protected zone and camping is only permitted within close proximity to designated wooden posts.  When we got to the lake and realized that we only had four miles to go before the highway (and a big dry section coming up), we knew we had to take a dip.  Actually getting to a point where I could get my whole body in the water was a bit of a challenge, and I ended up having to crouch down quite a bit.  It still felt great though!

After such a fantastic day, we did find ourselves back in the trees for a few miles after the lake.  It was somewhat boring, but better than the mile or so before the highway.  It ended up being a super painful mile over jagged lava rock.  Instead of the crushed rock or small rocks that we’d dealt with earlier in the afternoon, the trail was composed of large, unstable rocks that we had to carefully navigate.  My feet were not fans!

We took a quick detour when we got to the highway (Mckenzie Pass) up to a rest stop with toilets and trash cans.  Always a welcomed sight for a thru hiker!  We ended up camping closer to the highway than I’d normally want to.  However, there is a nice patch of dirt here before we hit the next section of lava fields (which looks like its a few miles long according to my map — I just can’t face more lava rocks this evening!).  The best part is there are no bugs here!  We get to eat outside our tent tonight!  This is our first night eating outside (without the help of sitting near someone’s fire) in a long time!

The highway doesn’t seem to busy, so hopefully we’ll have a quiet night.  I’m not looking forward to the lava fields tomorrow morning, or the fact that we have another 11 miles before we hit a reliable water source.  At least we have Bend to look forward to!  We’re hoping to get to Santiam Pass by lunchtime tomorrow, at which point we’ll try to catch a hitch into Bend for a zero.  Can’t wait!

6 thoughts on “Day 104: A Beautiful Day in Three Sisters Wilderness”