The trail this morning was filled with lots of lakes and ponds.  Everywhere we looked it seemed like there was water (and bugs).  I found the abundance of water to be surprising because most were not indicated on the water report, Guthooks, or my map. 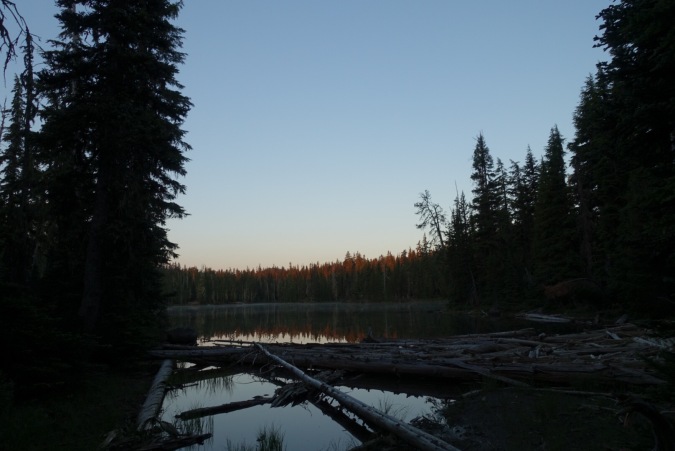 Early morning as we passed by the outlet for Brahma Lake. 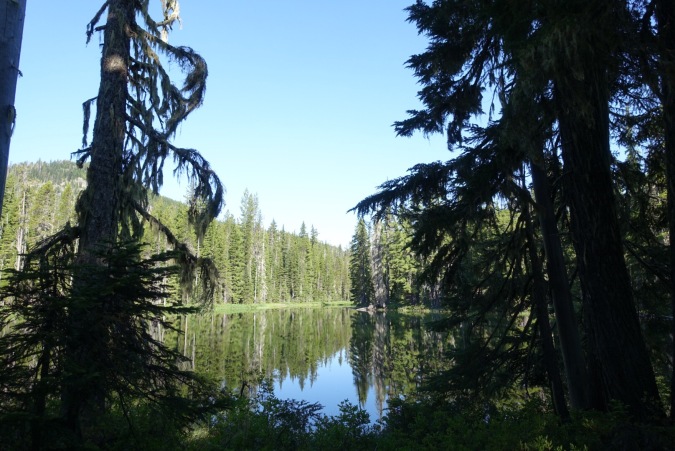 I have a confession to make (TMI warning).  Sometimes it’s hard to be a woman on the trail.  Specifically when it comes to peeing.  Guys can practically pee while still standing on the trail and it’s considered no big deal.  It’s a little trickier for women.  Before the PCT, I would find a tree or bush that I could stand behind to shelter myself in case anyone wandered by.  Now, that’s way too much effort and not quite practical in many areas.  So I basically just take a step off the trail, preferably when there’s a tree that will give me some privacy if someone unexpectedly comes up behind me, and do my thing.  I guess I forgot about the possibility of southbounders this morning — with all the people we camped around last night I was mainly concerned about the herd of nobos we’ve found ourselves in.  I was crouched down to pee this morning (backpack between me and the trail for a little extra privacy), when a random hiker walks around the corner and passes me!   Umm, hello?  It was super awkward to say the least.  He even made eye contact as he passed by!  So that was fun.

The hiking this morning was fairly easy.  Lots of time walking amidst the trees with few expansive views.  After a short climb over the first couple of miles, it was an easy, steady descent until we reached Horseshoe Lake about ten miles into the day.  It was a good spot for a quick break to filter water before heading back into the trees.

We stopped for lunch about four miles later at Dumbbell Lake, which had a large tenting area along the shore.  The best part of the lake was that our lunch spot was adjacent to a peninsula that jutted out into the lake and actually had a spot along it where we could dive into the water!  This might not sound significant, but most of our swims have required us to carefully wade out amidst rocks and downed logs.  Being able to dive in was awesome… except for the fact that my underwear is so lose now that I had to quickly retrieve them from around my ankles!  It feels like we’re on a roll with our daily swims.  They’ve been fairly quick, but I feel so refreshed afterwards.  A great cure to the hot days that we’ve been having! 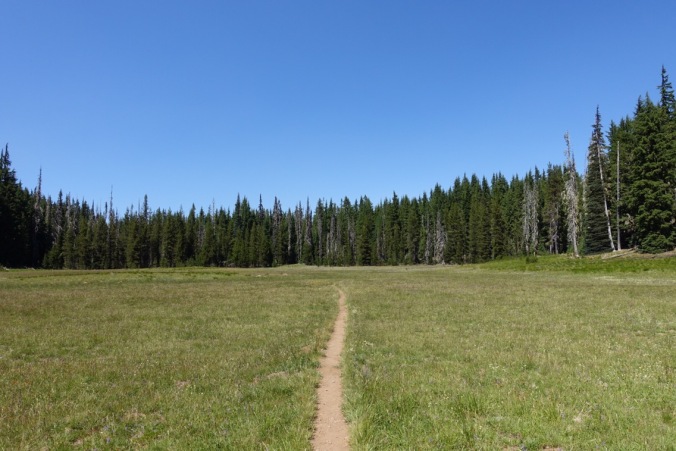 A brief clearing in the trees.

We’ve found ourselves in the middle of a large trail family that has been hiking together.  There were probably 10 tents near where we camped last night and every time we stopped today for a break or lunch we were surrounded by people.  It’s honestly a little overwhelming.  Everyone is nice, but it’s weird to constantly be seeing so many people after days of limited social interactions.  Hopefully we’re out of the bubble now.  This afternoon we passed by the turnoff for Elk Lake and I think that the trail family was headed off trail in hopes of rumored trail magic.  I’m at the point that the pull of a hamburger isn’t enough to detour a few miles to investigate when I’m carrying plenty of food.

We passed through yet another burn zone after the turnoff for Elk Lake. 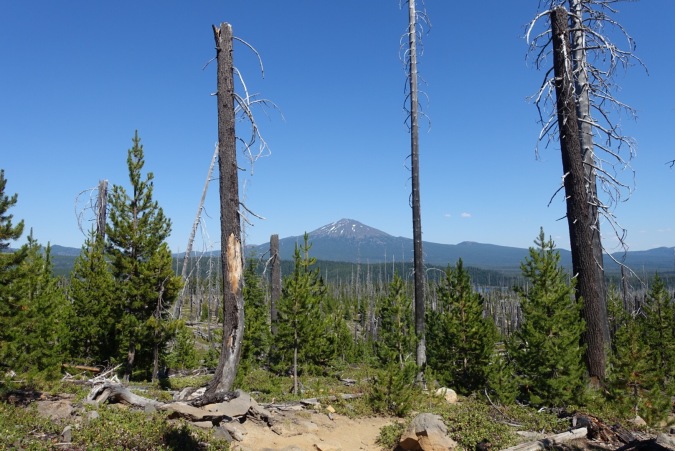 During one of my breaks this afternoon, I was looking ahead on Guthooks to try to figure out where the Eagle Creek alternate is located (I knew it was in Oregon… and that was about it…).  Based on one of the recent comments, it looks like it may be closed due to fire.  I ran into a section hiker who confirmed this fact and said that she’d called the forest service and learned that the alternate probably won’t be opened up for several months.  Bummer!  I’d been looking forward to the alternate, but I guess we’ll be sticking with the official PCT through that section after all and hoping that the fire doesn’t spread to the PCT.

Yep, still on the PCT! (I swear, it feels like the blowdowns will never end.)

We were treated to a nice little view at the top of our climb!

Near the end of the day we had what I’m starting to refer to as an “Oregon climb.”  About 1200 feet of elevation gain over about 3.5 miles.  This would have been considered a small “bump” in California, but now that we’re in Oregon it’s our big climb for the day.  I powered up the climb, passing several weekend backpackers struggling under the weight of huge packs.

After passing by lots of ponds this morning, it was much drier this afternoon.  That probably explains why we enjoyed a fairly bug-free afternoon.  Of course, like yesterday, the swarm emerged in the final mile before we planned to camp.  At least this time I reapplied DEET after swimming!  We found a tent site hidden away next to Sisters Mirror Lake, but were quickly forced into our tent to escape the bugs.  Another evening eating dinner in our tent 😦 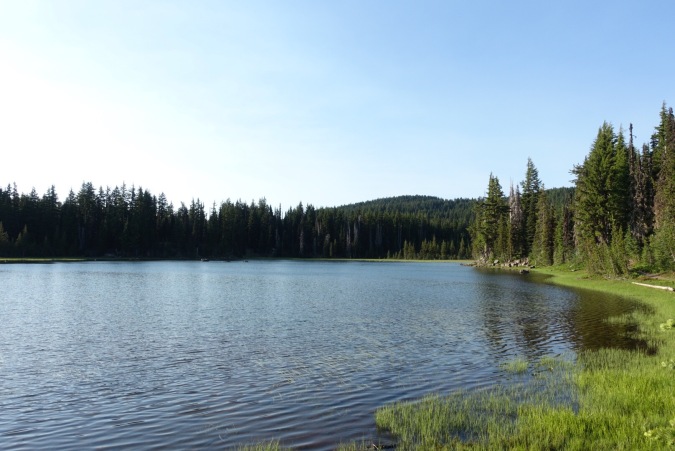 It’s clear that the other campers near this lake are not thru hikers.  It’s after 9pm and I can hear them still talking/yelling with more energy then I’ve felt at this time of night in quite awhile.  Oh well, at least we aren’t camped too close to them.

Up Tam, down Tam
This morning the clouds rising out of Muir Woods looked kinda like Vazquez Rocks.
Mt Tamalpais State Park, next to the free parking across from the Mountain Home
Finished City to the Sea Half Marathon!
Throwback to Halloween less than a month after we finished the #pct #pct2017 and we didn’t really have candy to give out to trick-or-treaters. #hikertrash
Short morning hike.