I woke up in the middle of the night to the sound of rain pattering on the tent. I checked the tent to make sure that everything was set up for the rain and then went back to sleep. It was still raining when our alarm went off at 5am. Between the rain and our 30-mile day yesterday we opted to sleep in until almost 6:30.

Sleeping in felt awesome. That is, until we woke up and found that there was a huge puddle at the bottom of the tent — right where my pile of hiking clothes was sitting (I use my hiking clothes as cushioning for my feet since my sleeping pad isn’t full length.). My clothes were soaking wet. Everything else was fine, but the thought of putting on cold, wet clothes to hike on an already chilly day was not appealing. To say that this put me in a bad mood to start the day might be an understatement… 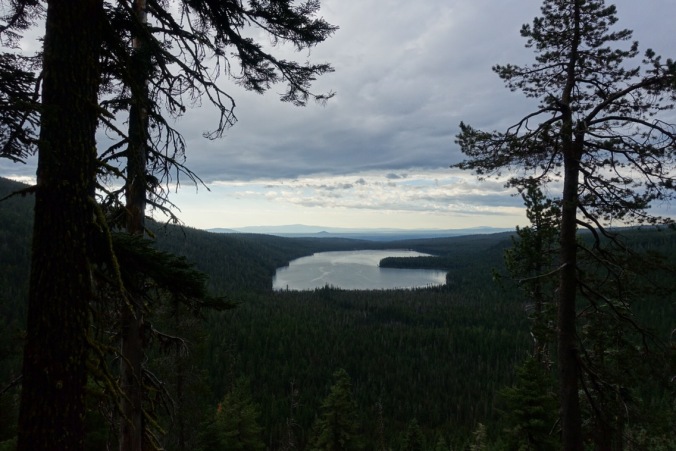 A glimpse of a lake between the trees.

We packed up the tent in a light drizzle, but without knowing when or if the rain might stop we figured that we should get going. I put on my wet shorts and t-shirt under my rain jacket and hoped that I’d warm up quickly. My discomfort faded within about a mile as I warmed up with the help of my rain jacket.

One benefit of the light rain was that it kept the mosquitoes at bay. As the rain stopped though, they were out in full force. Continuously brushing them off my arms was slowly driving me crazy (I was wearing my short sleeve shirt and had abandoned my rain jacket because I’d overheated). I finally gave in and stopped to put on my cold, wet long-sleeved shirt and headnet while being swarmed by bugs. Sometimes it feels like the bugs are some kind of torture device — stopping makes me feel like I’ll quickly lose my mind if I can’t escape the swarm!

I chatted with a woman from the Netherlands for awhile this morning. It was a welcome distraction from my discomfort. In addition to the bugs and wet clothing, my right heel was really sore today. I guess that’s the reward for my big day yesterday. Otherwise, the scenery for this morning was primarily trees with few viewpoint spots. 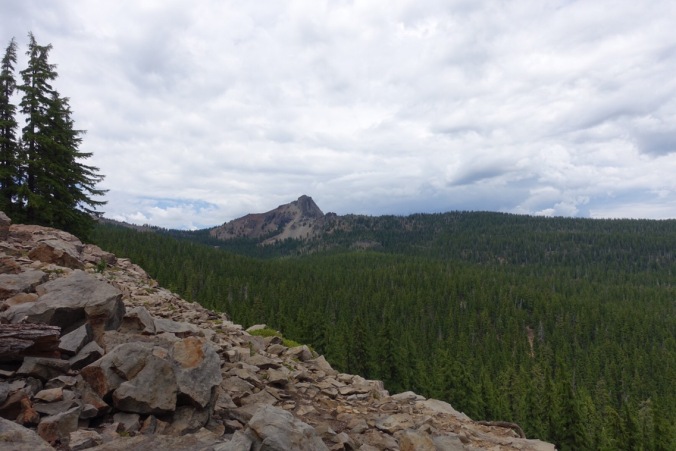 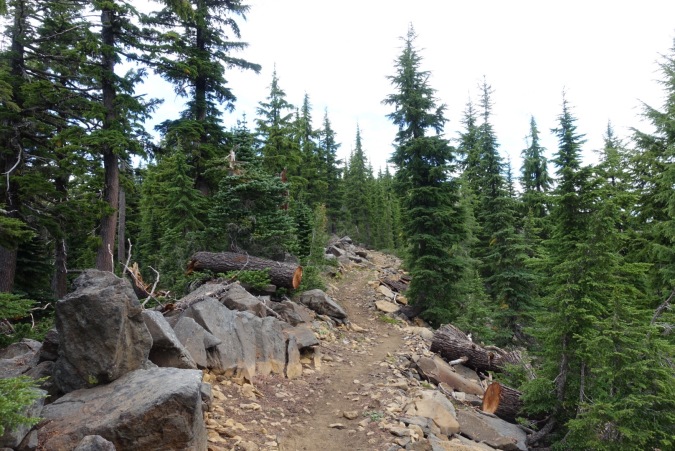 Our water source for the morning was off trail down a steep hill. The side trail was actually better maintained than I feared it would be, with actual switchbacks to get us down the hill! Unsurprisingly, the spring was swarming with mosquitoes. It wasn’t the prettiest of water sources, with a lot of standing water, so I went further down the hill to collect water in a section that was actually flowing. This would be our only water source until Summit Lake, about 19 miles later, so we filled up knowing that we wouldn’t have more water until camp.

The only way to avoid the bugs today was to keep hiking (and that was only partially successful). It seems like our bug spray is helpful for awhile, but its effectiveness wears off. The sun finally started to come out from behind the clouds at about lunchtime. Perfect timing for me to scope out a spot where we could yard sale all of our wet stuff and eat lunch.

Getting going after lunch was super painful. My heel was not happy to be walking again and it took me awhile to work my way back up to a normal walking speed. My physical pain was exasperated by a conversation I had with another hiker from the Netherlands. Normally I enjoy chatting with people for a bit while walking, but this guy just rubbed me the wrong way. It seemed like he was questioning my decision to hike the PCT (despite having made the same decision himself) and just didn’t seem to get the hint that I was trying to hike at a faster pace than he was. Finally, he turned off the PCT to take the Oregon Skyline Trail, which I guess offers a different route to Shelter Cove that is 8 miles shorter (something like that, I don’t really know the details). I don’t quite get why people are constantly looking for shortcuts out here, but I didn’t mind getting the guy off my tail. 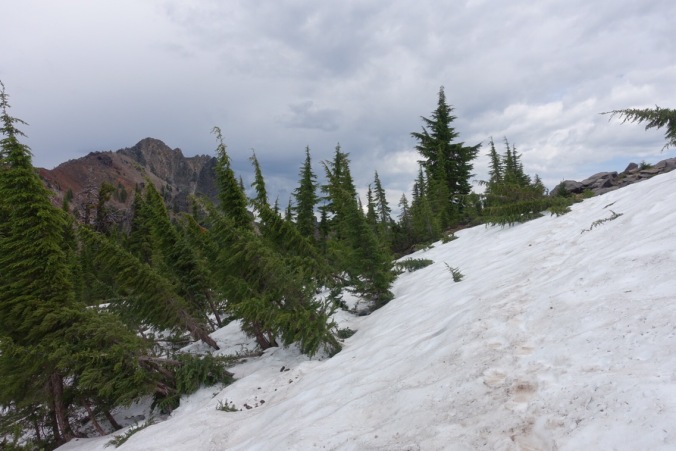 The trail crossed a small bit of snow just to keep things exciting.

I was definitely in the middle of a negative thought cycle at this point, so running into three women at an awesome viewpoints was a nice distraction. They were so excited about their section hike and still green, so it was nice to absorb some of their enthusiasm. They mentioned the possibility of snow before Shelter Cove (our next resupply point), but I wasn’t able to add to the conversation. I stopped checking the snow report awhile ago because the reports tend to be outdated and overblown. I guess we’ll just have to wait and see what’s ahead. We will hit this section tomorrow, so I guess it’s good to know that it might take a little longer than a dirt trail.

I felt tired on our final push of the day, but the promise of a swim in a nice lake and a campsite with a privy pushed me on. That and we didn’t have enough water to dry camp and there wasn’t any water until Summit Lake where we’d initially planned to camp.

The trail continued primarily through tree cover as we made our descent down toward Summit Lake. We passed the first sites along the lake and continued another mile or so to the established campsite with a privy. My body was not pleased to find that the privy was locked when I arrived. Not cool! I guess there was some kind of maintenance issue, but it was a big disappointment after telling myself that I wouldn’t have to dig a cat hole. 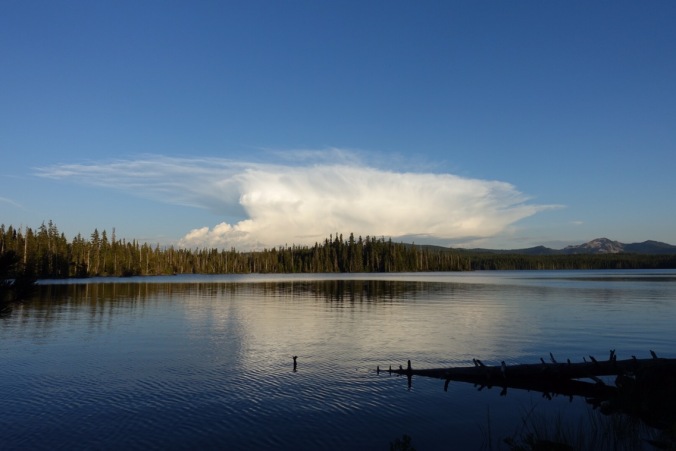 Summit Lake in the early evening.

There was a group of three people already at the campground BBQing hot dogs. They offered me one and a beer. Score! One of the guys was section hiking the PCT and had lots of questions about my gear and planning. The other two lived in the area and were picking him up. It was great to chat with them and “help” them with their hot dogs, beers, and soda. They even left a couple drunks behind for us. So nice! We normally don’t build campfires along the trail, but they’d already started one, so we got to enjoy it after they left while we ate our dinner at the picnic table. With the lake shore right next to our campsite it was easy to be sure that we’d completely doused the fire before retiring to our tent for the night.

We discovered this evening that Michael had an impressive number of mosquito bites on back of leg. Poor guy can’t catch a break!

Sunset at Summit Lake.
Tomorrow we head into Shelter Cove. We’re hoping to make it by lunch time — both because we’d love a town lunch and because we’re running low on food again. Hopefully this rumored snow won’t slow us down too much!!