What a long day — I’m exhausted! We spent the morning walking along the hillside, which was fairly exposed but awarded us with some awesome views. We skipped the first water source of the day (and in 10 miles) because it was off trail and we still had enough water to get us a couple miles further to a small spring flowing across the trail. What can I say, we’re lazy! 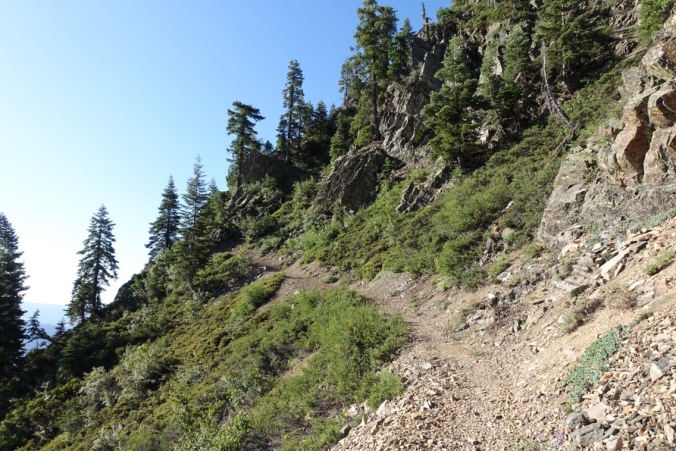 We’d gone about 6 miles and it wasn’t yet 8am. With the next 11 miles downhill, we decided to push to the campground at the bottom of the hill for lunch. I had visions of picnic tables dancing in my head and I may have used that as an incentive to convince Michael to push further too! 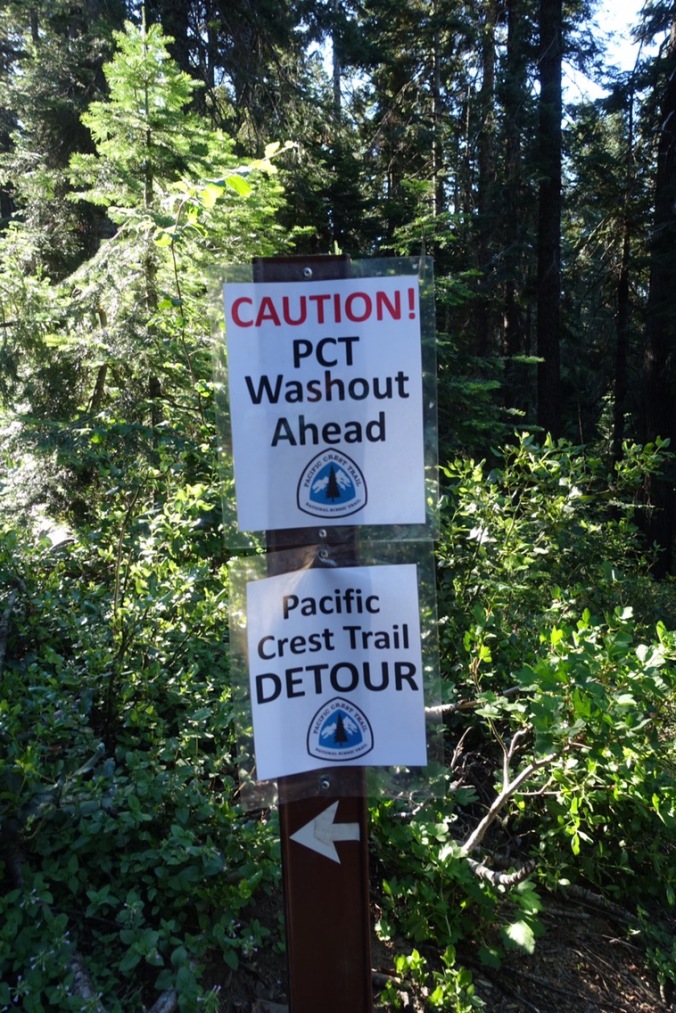 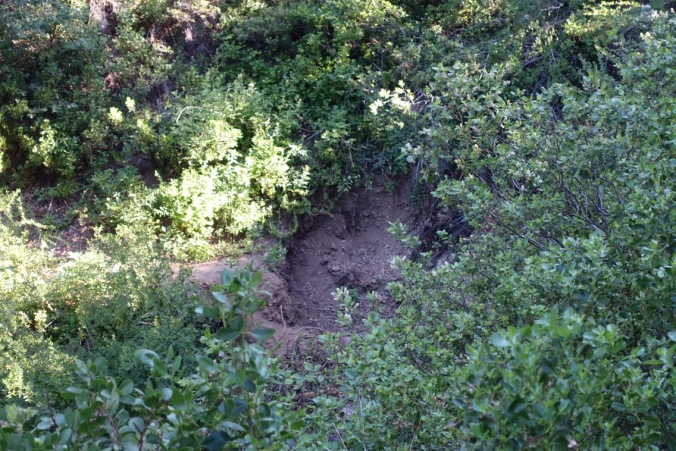 Washed out section of the trail that the short detour avoided. 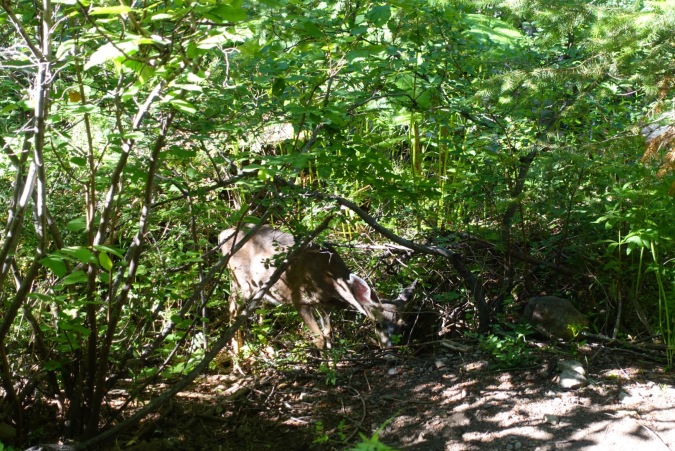 This deer did not want to move away from the trail, she was too hungry! 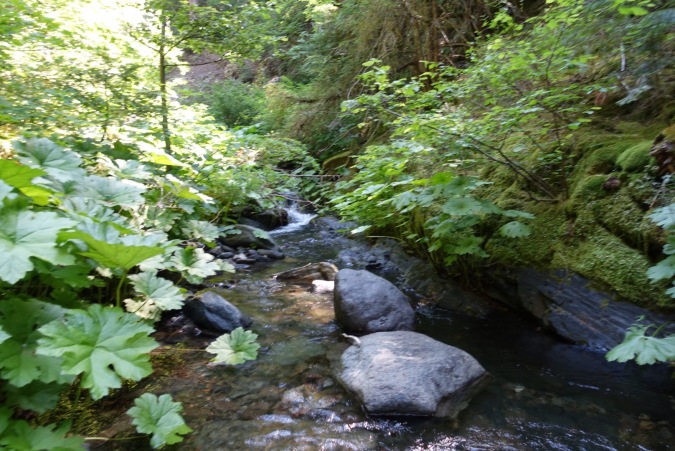 The downhill miles went quickly as for the most part they weren’t too steep. We had a couple small streams to rock hop across. Michael’s foot slipped off a rock on one of them and it became an instant wet crossing! At least it was just his feet that got wet. 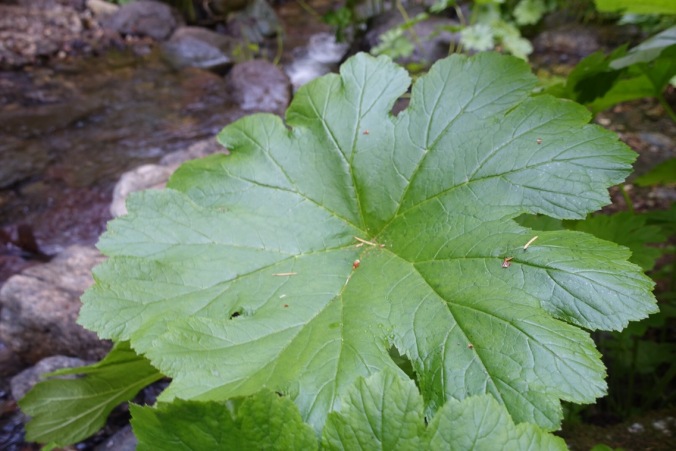 We passed a group of southbound hikers fairly early in the morning. The last commented on the high number of northbound hikers he’d seen, but we didn’t see any all morning. I guess that’s what happens when we start four miles back from the pack (which I imagine camped at water).

We arrived at the bottom of the mountain to find that the camp ground had no picnic tables. Bummer! At least it was next to a nice river and had a privy…

We ran into a group of hikers we hadn’t met before at the camp, one of whom was getting off trail for awhile with shin splints. This seems to be a thing right now (when we left Grams at Burney Mountain Guest Ranch he was also suffering from shin splints) and a good reminder for us to be careful about increasing our daily distances too quickly. 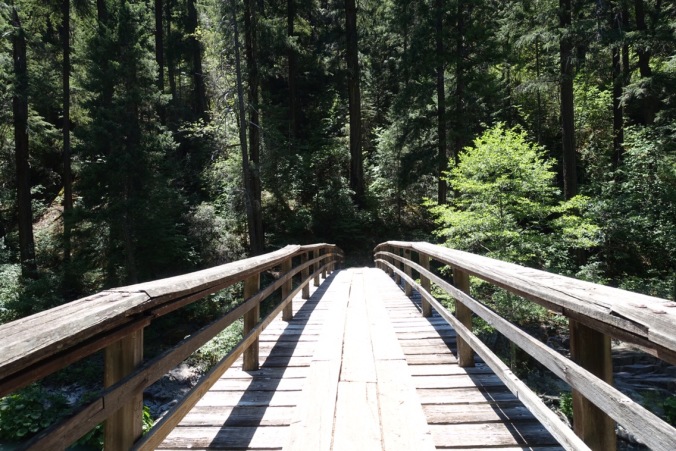 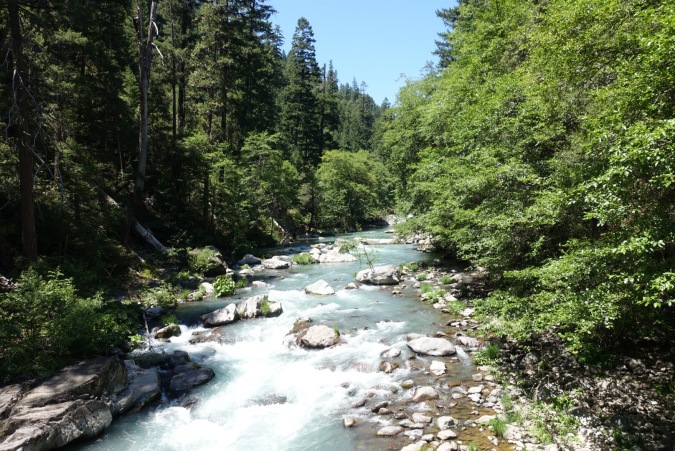 After such a long descent before lunch we were in for a big climb after lunch. Again, the exposure wasn’t too bad but it was still pretty hot. We had less than three miles to water, so I was able to keep my water weight down. To make up for it, I was carrying a small stuff sack with bathroom stuff that I’d found in the privy that had been left behind by a hiker that left the campground before us. I was in a mission to track down the owner. When we stopped at the water source three miles in, I found out that they’d left there about 10 minutes before us.  So close.

There was an eight mile gap until the next water source, which would put us at over 27 miles for the day to get to it. I didn’t want to carry the extra water for dry camping on the upcoming climb though, so we decided to push for it. Up we went through the trees. Within a couple miles I’d found the rightful home for the extra stuff sack I’d been carrying around. Its owner hadn’t realized he was missing his toilet kit, but I’m sure he would have figured it out soon enough…

This afternoon’s climb would have been horrible but not for the tree cover. It was a really hot day (high in the 90s) and the exposed sections that we did cross felt unbearable. To add to it, my knee started to hurt during our final downhill miles. I think it’s from too much descending today, but any pains make me nervous these days after seeing so many people suffering from overuse injuries. 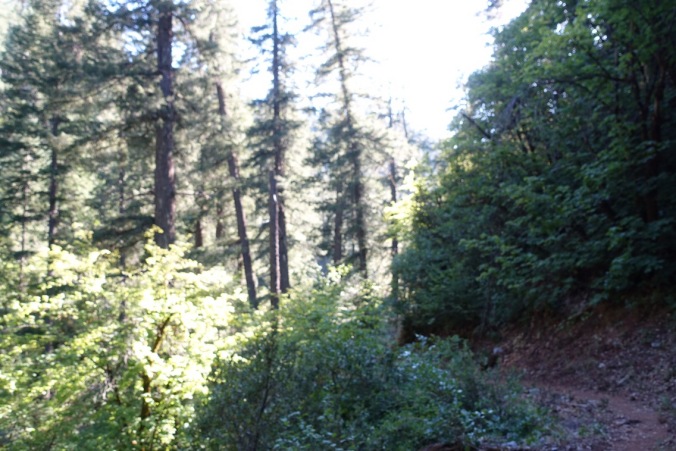 The only (blurry) photo I took from this afternoon’s tiring ascent.

Once we finally reached water again, we quickly grabbed our water and washed up and then hiked another half mile to camp. The campsite was surprisingly empty, so we set up our tent and ate dinner. Sadly, we quickly found ourselves surrounded by mosquitoes and hid the rest of the evening in our tent. I get the feeling we won’t have many opportunities for cowboy camping until we exit the mosquito zone.

At about 8:20, another thee hikers showed up at our camp site. I’m glad I wasn’t hiking that late!

Tomorrow’s a town day! Despite our delayed resupply box, we’ve pushed the last couple of days to make sure we’ll get to Castella by the 4th. Turns out we didn’t have another dinner packed, so it was a good thing we’ve been able to put in the miles! We’ll keep things low-key and spend the Fourth at the state park campground. I’m hoping that we’ll be able to yogi some s’mores from the car campers!