We spent over three weeks in Taiwan, so we were rarely in a hurry. But as I write this, we are about to set off hiking the Pacific Crest Trail, so I figured I’d try something new since I don’t have the time to blog in as much depth as our last few countries. This post includes our itinerary and some general comments; later on I will post photos from our favorite activities. There’s a table of Taiwan posts near the bottom of this post. 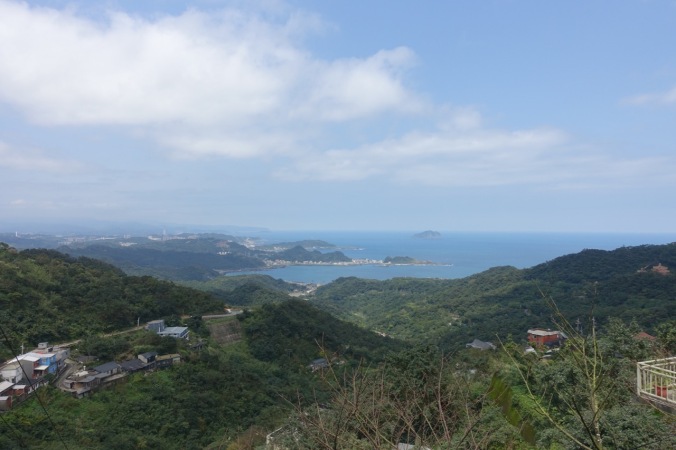 Photo from the hike between Jiufen and the Houtong Cat Village.

Taiwan is an island shaped like an (American) football, with high mountains running north to south along the eastern side of the island. The western side of the island is home to a large flat area where most of the people live. Taipei, the capital and largest urban area, is at the northern end of the island. For trips to Taiwan over a week long, it’s pretty easy to plan an itinerary: either clockwise or counter-clockwise around the island. Trains are good — I think our longest ride was a bit over 5 hours and I don’t think there are many longer rides on the island.  For most of our rides, we were able to book on the spot for a departure within the next hour. 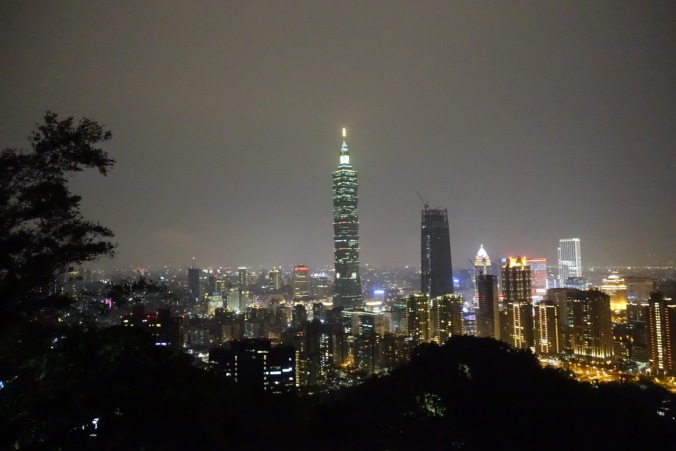 View of Taipei 101 from Elephant Hill  — an “easy” evening hike.  It’s logistically easy because it’s in the middle of the city, but the hike is basically a long staircase up the hill.

We started in Taipei, where we saw a few sights and went on a day hike before taking the train to Hualien on the East Coast. From Hualien we did a day excursion to Taroko Gorge and enjoyed the city itself. The East Coast is stunningly beautiful but has more difficult weather, so we didn’t stay long.

[Elizabeth’s note: We had our craziest “it’s a small world” moment while in Taipei when I ran into Marcus, a law school section-mate of mine, while browsing in a shop.  What are the chances?  He doesn’t live in Taipei and it’s not like we were even at a major tourist sight.  After chatting for a bit and quickly discovered that we were also staying in the same capsule hotel (in neighboring rooms)!  We met up again with Marcus for dinner and a short city hike up Elephant Hill (and of course, ran into him at our hotel several times).  It was nice to see a familiar face and crazy what a small world we live in!!] 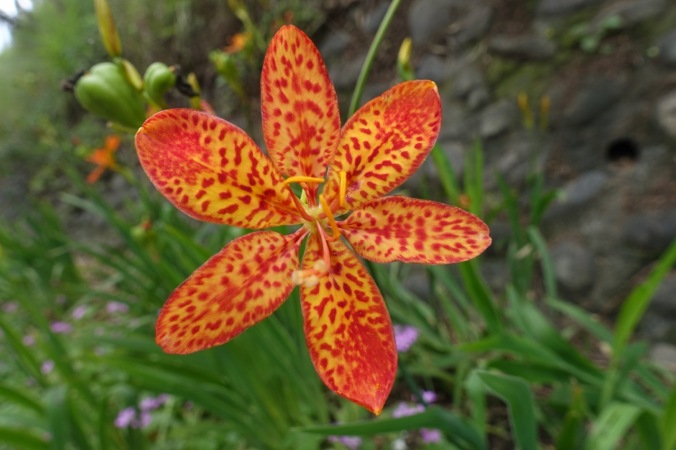 A flower in Hualien

We then took our longest train ride to Tainan — Taiwan’s capital until the 1890s — where we saw uncrowded temples and monuments. We visited hot springs at Guanzuling, then we made our way into the mountains, first to Alishan and then to Sun Moon Lake. 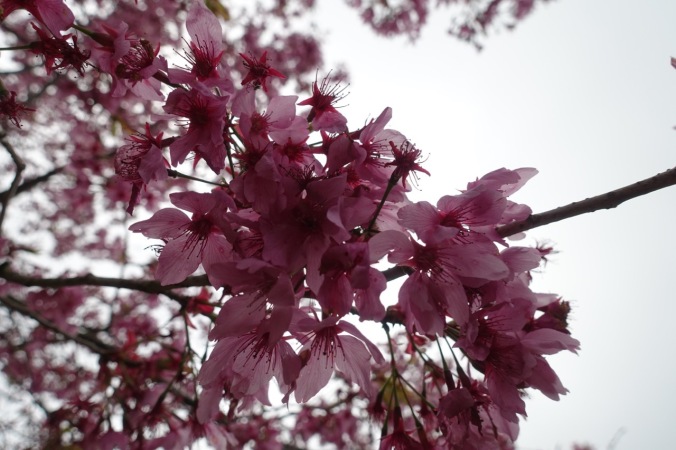 We visited Taichung and Lukang — home to famous master craftsmen — before returning to Taipei. From Taipei we did a day trip to hike from Jiufen to the Houtong Cat Village and then hike further to nearby waterfalls. In addition to the main sights, we enjoyed more locally-oriented attractions, including a baseball game, a puzzle cafe, and the original cat cafe.

Ok, that’s a lot. So I wrote other posts. The posts are (links to be added as soon as the pages are up):

For the most part, Taiwan was a good stop. It’s more developed than any place we had been for a while, and very orderly, but still affordable if you’re careful (cheaper than Hong Kong and Singapore, more expensive than Malaysia). Everyone is polite. People queue in an orderly fashion — even to board the escalators in metro stations. Many people speak a little bit of English — not as much as Malaysia, Singapore, or the Philippines, but enough to travel without learning much Chinese . . .

Speaking of, you may be wondering if Taiwan is like China. There are unmistakable similarities. Taiwan uses Traditional Chinese writing (like Hong Kong) and the food, if sometimes unique, takes Chinese forms (dumping, wanton, scallion pancake, etc.). But it’s also quite different from mainland China. There are also Japanese and Korean influences, especially in food. You can blame that on 50 years of colonial rule by the Japanese (when sushi and baseball took hold) and the recent invasion by K-Pop.

In Taiwan you never need to use your elbows to get a good view of a tourist attraction (not something I can say about the mainland). And signs of the political differences are apparent. There are often people handing out flyers, ranging from Falun Gong (religious/spiritual group banned in mainland China) to Jehovah’s Witnesses. We even saw a flyer supporting marriage equality in Taiwan (as I write this, a marriage equality bill is being considered by the Taiwanese legislature, and a court challenge is under submission after the Constitutional Court heard oral argument while we were in Taipei).

You don’t see this in Beijing.

The government of Taiwan still calls itself the Republic of China and still claims all of Chinese territory, while the People’s Republic of China claims Taiwan. But don’t let this political theater fool you: travel in Taiwan is very different than travel in mainland China. And of course, you don’t need a Chinese visa (as Americans, we entered visa-free). There’s more about specific activities in the subject-focused posts. Enjoy!