After Mandalay, our next stop was Pyin Oo Lwin, considered the summer capital of British Burma since it is where the British governor resided for part of the year. We left Mandalay by shared taxi (~90 mins, 6000 kyat each), and explored Pyin Oo Lwin by bicycle. The streets are full of lovely colonial mansions and we attempted to follow a hand-drawn map from our guesthouse around to some of the more notable buildings.

The Candacraig Hotel, formerly the British Club, was under renovation during our visit.

We cycled about 6km outside of town to the National Kandawgyi Gardens, which were beautiful. We spent a couple hours walking along the various paths, visiting the butterfly and orchid exhibits, wandering through the bird enclosure, and sampling durian ice cream (never again). 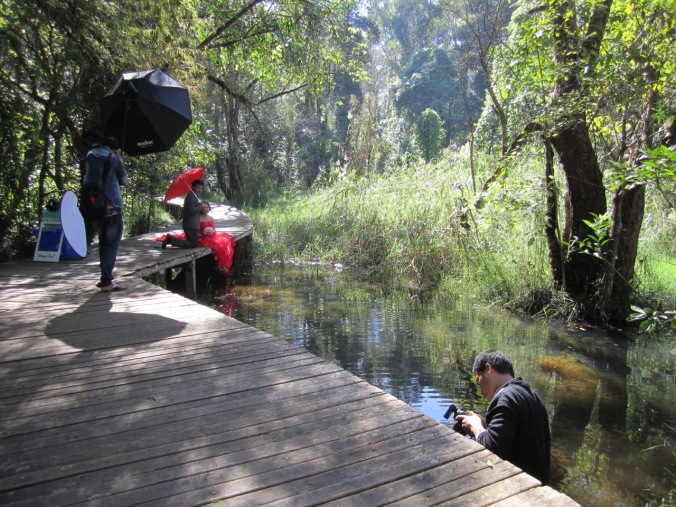 Obviously there was a wedding photo shoot going on in the gardens.

When it was time to head back to town we were faced with a bit of a conundrum. See, when we first arrived at the gates of the garden, we heard a little “clink” coming from my bike and stopped to look around to see what I’d dropped. Finding nothing, we got back on our bikes to continue on and quickly discovered what had fallen — a link from my bike chain. I attempted to ride the bike for a bit, coasting on the downhills and Flintstone style with my feet pushing along the ground the rest of the time, but finally gave up and attempted to hitch a ride.  A large truck pulled over and I loaded myself and the bike into the back with a few oil drums for the ride back into town.

Apparently, you can’t just go in to buy a drink from the cafe at the Governor’s house. You have to go on a tour (which comes with a free cup of coffee — it was never clear to us if you could order much else at the cafe). The mansion is now filled with wax mannequins portraying various figures who were important in the town’s history.  While the house also functions as a hotel, it didn’t really look like it was in operation — apparently you have to rent out the entire house. 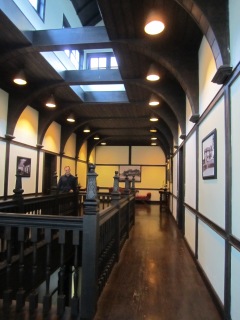 Wax statute of General Aung Sun at the Governor’s House.

[Elizabeth’s note: I’m not one to believe in ghosts, but the Governor’s house is clearly haunted. Walking around the old buildings was super creepy — and the wax figures (some of which literally had beady red eyes) did not help matters. The building’s haunted status became official when we went upstairs in the “hotel” building and you could hear creatures scurrying in the eaves. Yes, it was probably a bunch of pigeons, but there is no way I could have slept there. So creepy, and therefore obviously worth the visit.]

Not creepy at all…

Once again, I made my way back to our guesthouse Flintstone-style. What should have been a super chill day cycling around town ended up rather stressful with the bike mishaps. At least Elizabeth was relieved that, for once, the bike mishaps did not happen to her and that no blood was shed. Despite my bike troubles, Pyin Oo Lwin’s charm did shine through and is definitely worth a stop.

One of Pyin Oo Lwin’s biggest attractions is catching the train from there to Hsi-Paw. We booked tickets the evening before (ticket office open from 4-6pm and tickets are best booked the day before), and got on the next morning. The train actually starts in Mandalay but very early (4 a.m.), so most people join in Pyin Oo Lwin. Most passengers in the “upper class” compartments were tourists or their guides. We then enjoyed a pleasant (slow) seven-hour ride through the countryside and small towns along the tracks. To say that this is the slowest train that we have ever ridden would probably not be an exaggeration — we traveled slowly enough that you could have picked the yellow flowers on the bushes that grew along the tracks (and that were literally so overgrown that they often pushed their way inside the open windows of the train). 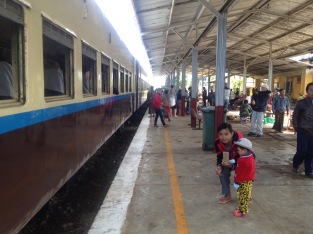 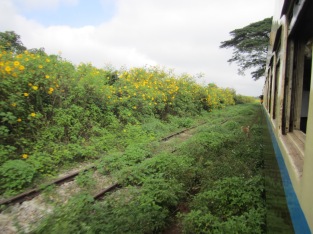 The highlight of the train ride is crossing the Gokteik Viaduct. This steel bridge crosses high above the canyon below. The approach is along several switchbacks, so passengers on both sides of the train could get a picture from their seats — but everyone seems to go side to side to get lots of pictures anyway. This may or may not contribute to the train rocking side to side even more.

Did I mention that Bridge on the River Kwai is set in Myanmar (then called Burma)?

After a short stop near the bridge, the train rolls slowly across, it sways right and left, but luckily never falls over. The view is great. 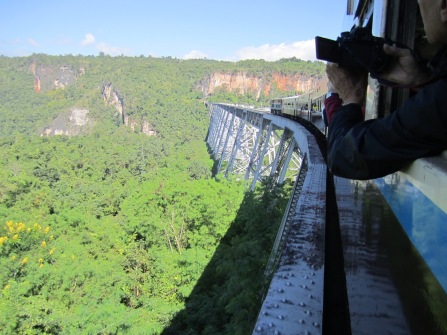 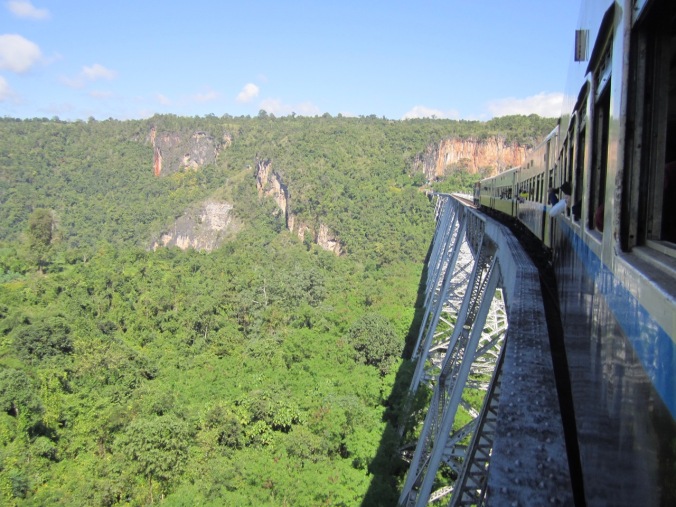 One stop later, over 75% of the people get off the train. Most of these people are tourists with their guides, and they appeared to have booked automobile transport back to Pwin Oo Lyin or Mandalay. We continued on to the town of Hsi-Paw and arrived mid-afternoon (Hsi-Paw will be covered in the next post).

We have made an effort to take the bus in Myanmar because it is typically faster and does not fund the repressive Myanmar government. We made an exception for this train. It was cheap (2,750 kyat — just over $2.00 — per person) so I don’t think we did much for the regime. And it was beautiful.

2 thoughts on “Pyin Oo Lwin and the Gokteik Viaduct”

Hiked up Mt Tamalpais, down to Stinson Beach, and back home via the Dipsea Trail. Kind hikers set a great pace up Tam and let me get a picture with their dog (other hike photos follow).
The old Vedanta temple is on the Fog City Run route!
The Double Dipsea
I created a 10k route. Then I ran it twice—once forward and once backwards.
High tide at the Bay Trail
It’s really tough to capture what this combination of trail, clouds, and sky felt like. But here’s a couple photos.