Our time in northern Myanmar was marked by beautiful travel between places — Mandalay was a prime example. We took a boat from Bagan to Mandalay, explored its surrounding sites including a temple with pythons and even found our own “Little Bagan” nestled just south of the snake temple near Mandalay.

We opted for a nice boat ride to travel from Bagan to Mandalay. The bus might be faster and cheaper, but with the choice of comfortable seats arranged downstairs, tables in the shade, and chairs for lounging in the sun upstairs, I was quite happy with the boat ride. We left before sunrise and arrived around dinner time. After quite a bit of “what to do next” travel anxiety, a day where I could do nothing other than relax, read, and listen to an audiobook was perfect. 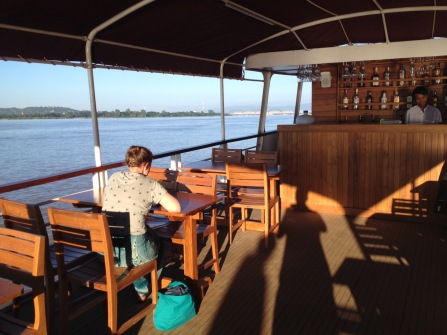 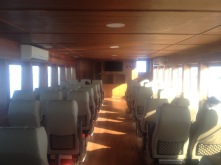 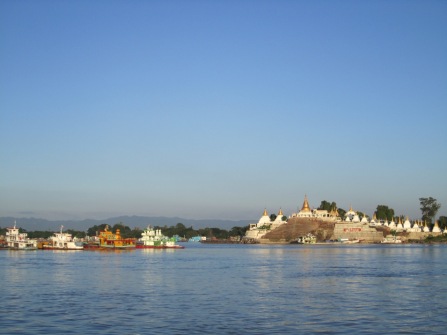 Mandalay itself is not a great attraction. The streets are dusty and the lack of consistent sidewalks, long distances between sights, and the intense sun during the day made walking around a difficult endeavor. Because of this, the city itself is probably best explored via motorcycle, however we opted not to do so due to the traffic and because none of the sights particularly piqued our interest.

The old fortress/castle/palace takes up a big chunk of the city, but as a military installation it is mostly closed to the public. There is a museum in the middle of the old palace, but given how out of the way it is and some poor reviews, we decided to skip it. The hilltop pagoda was pretty for a sunset visit, but having been to the Shwedagon Paya in Yangon and Mount Popa near Bagan we could have skipped that too.

That said, we found a few things that made our stop in Mandalay fun. In the afternoon we went to the driving range to hit some golf balls. The fees were cheap, including for the required “caddy.” Initially I didn’t understand a caddy at a driving range, but having someone (seemingly always a young woman) place each golf balls speeds up the driving range experience. It was super awkward at first, but eventually we got used to having her help. Beer at the “clubhouse” was reasonably priced as well. 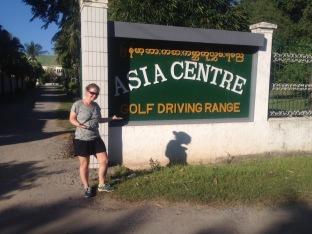 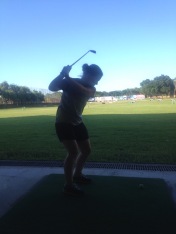 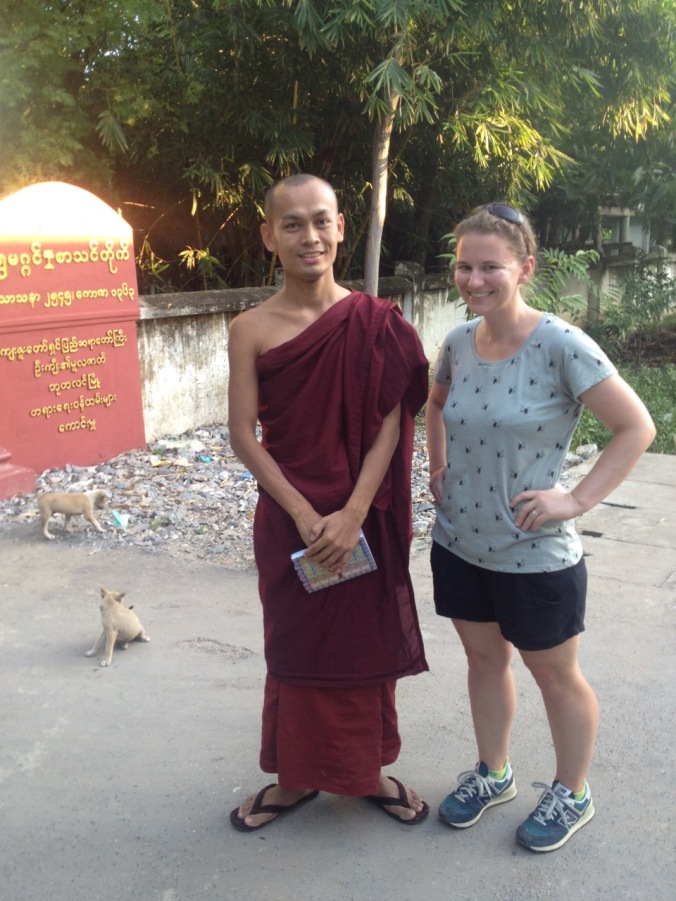 Next to the driving range is a monastery where we met this eager monk who wanted to practice and improve his English. We we happy to talk to him.

South of Mandalay is the iconic U-Bein Bridge, a 1,300 yard long teak footbridge over a shallow lake. We got up early and caught a local truck from the city center to the village near the bridge for 1,000 kyat total (~$0.80) in the hopes of avoiding the big tour groups. The lake was filled with quacking ducks and the occasionally water buffalo-like animal. While the bridge wasn’t completely abandoned, it was being used primarily by locals during our visit. We were impressed by how wide and sturdy the bridge is given how rickety most photographs make it look. The bridge made for a nice, peaceful walk, after which we jumped off the traditional tourist track (e.g., continuing on to the ruins of Inwa and the temple-filled hills of Sagaing) and caught a taxi to Paleik. 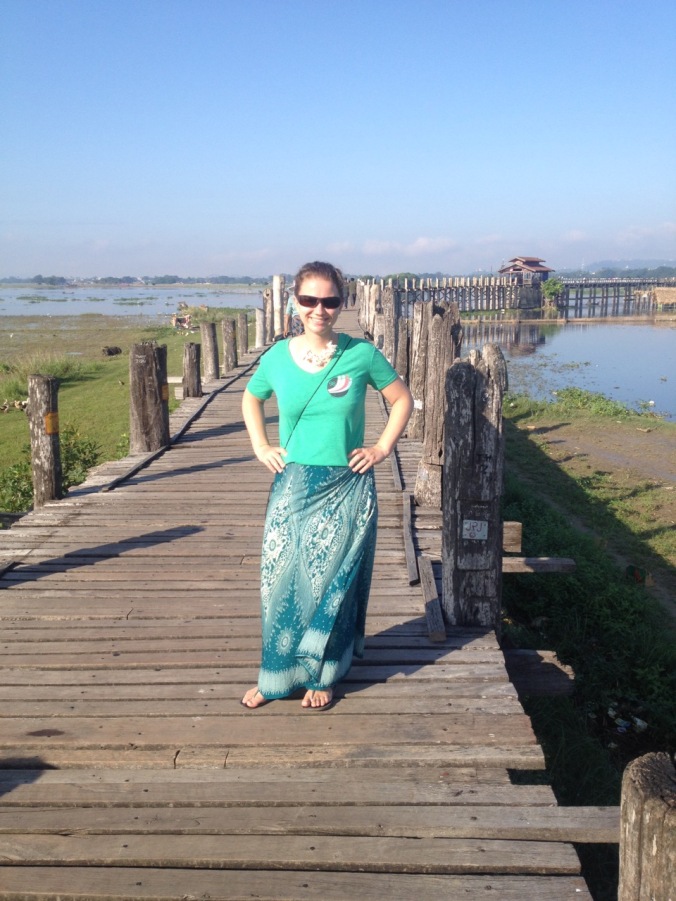 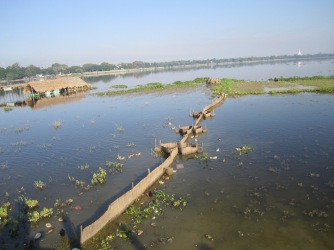 A quick note on taxis in Myanmar: if you’re not going to a major destination (e.g., the airport) the taxi may end up taking you somewhere else. It’s not, at least in our experience, part of any scam. It’s just that drivers don’t seem to know about off-the-beaten-path places and don’t have GPS. We found it useful to track our rides using maps.me, an app that stores the map on a phone and uses Location Services but not data, so it works without a local SIM card. That allowed us to redirect the driver to the correct location. Our taxi driver to Paleik was not the first that we had to tell to turn around when he started going in the wrong direction.

Paleik’s Hmwe Paya is better known as the Snake Pagoda. Back in the 70’s, a couple of pythons a moved in and made the temple their home. The original snakes have passed away and been replaced, though one remains as taxidermy. Every day at 11:00 a.m., the snakes are washed in a rose pedal bath and fed. We’re not sure that the snakes actually emerge any cleaner after the bath — while we watched, one snake pooped in the bath, making it stink pretty badly. Still a fun, if weird experience.

Buddha with pythons. Can you spot both of them? 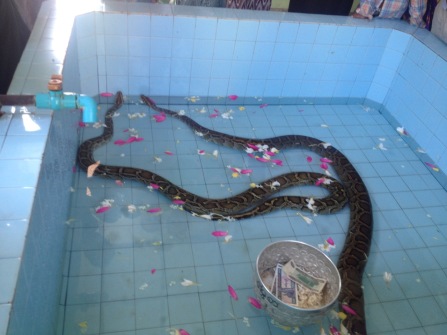 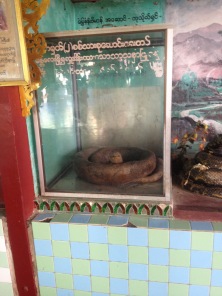 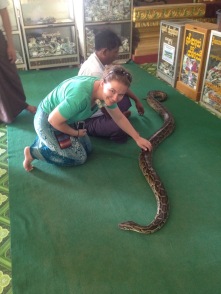 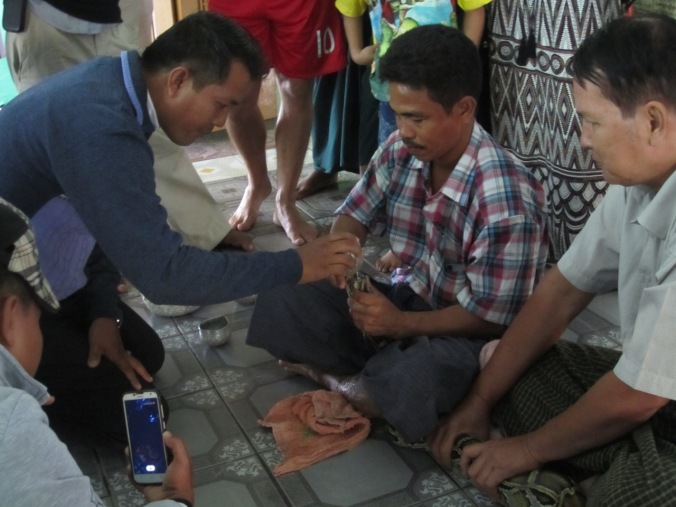 Force-feeding the snakes a milky substance was a bit unpleasant to watch, but maybe is necessary to have safe snakes? 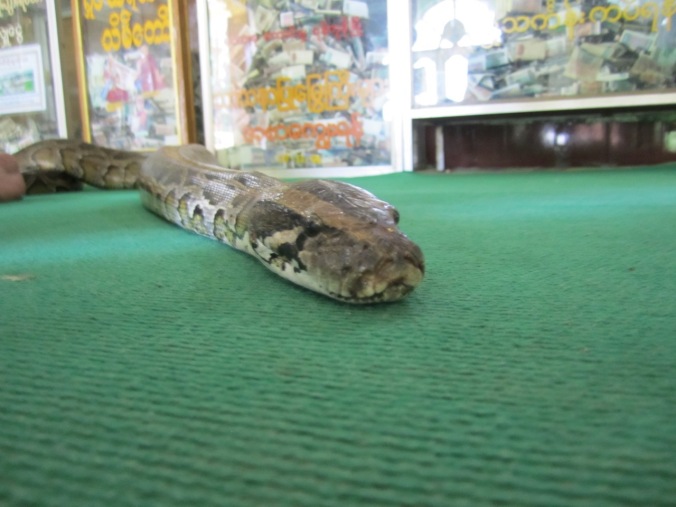 We also walked around a group of pagodas called “Little Bagan” just south of the Snake Pagoda. It seems there are several places in Myanmar that have a cluster of temples called “Little Bagan,” but this one was definitely worth the visit. The site was a collection of about 300 buildings — it felt like a less manicured and curated version of Bagan, which made the site exciting to explore. A few people were working near one temple but otherwise we had the place ourselves. It was quite enjoyable. 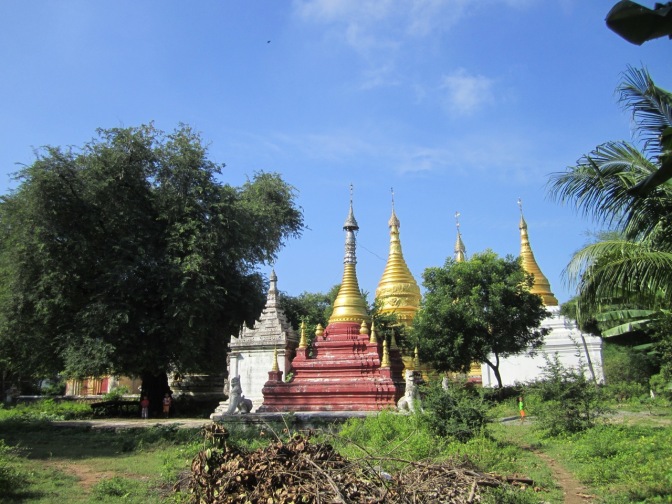 To get back, we talked our way into sharing a truck with a local family (mistakenly thinking that it was like the paid truck route that we’d taken to get to the bridge). They insisted that I ride in the cab because I am tall, while Elizabeth rode in the back. We figured we were paying for our share, but when we arrived back in Mandalay they refused to let us pay. Such amazing hospitality!

You Can go to Jail for Telling a Joke?

Our final attraction in Mandalay was the Mustache Brothers. This comedy and dance act makes fun of the regime, as well as the CIA, FBI, and KGB (they really should update this). It’s slapstick and the dancing isn’t really impressive, but the three main performers went to jail as punishment for their performance in front of Aung Sun Soo Kyi in the 90’s.

One of the Mustache Brothers, Par Par Lay, now deceased, was mentioned in a scene in About a Boy. The show now includes playing the DVD, so I had a chance to watch Hugh Grant’s friend (who I thought was played by Louis CK, though IMDB disagrees) try to raise money for Amnesty International by telling a potential donor that Par Par Lay went to jail for seven years for telling a joke.

When the comedians were released and the show was allowed again, the government limited them to performances in English to foreigners only. The show is still in English, though it’s unclear if there is any enforcement of the rule against Myanmar citizens watching.

In any event, I was happy to see a show with a place in history. Admittedly it wasn’t that good of comedy or dancing. But still worth it.

[Elizabeth’s note: I’m not sure this description captures how truly odd the performance was. First off, the performance space is basically someone’s garage with a curtain dividing the performance area from a changing area. The brother relies heavily on boards that he holds up with words or phrases written in English — I guess to help people who might have difficulty with his accent, but it isn’t clear. And the dancers… basically it’s the remaining Mustache Brother’s aging family members, including his wife who he makes jokes about throughout the entire performance. I had been really intrigued about seeing the performance because of their role in criticizing the government and enduring jail terms for it, but I get the sense that the performance for foreigners lacks the edge of the original Burmese performance (or doesn’t translate well).] 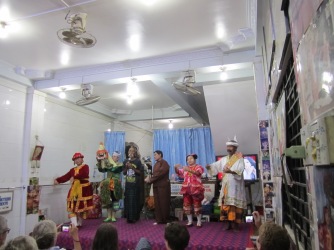 While we found the city of Mandalay to be a bit of a miss, our boat ride into the city and its surrounding sights made up for the city’s deficits. Had we been even more aggressive with our out-of-town sightseeing, we heard that both Inwa and Sagaing were interesting to visit and could have easily been combined with visiting the U-Bein Bridge using either a driver or public transit.

I should also mention that we had good cheap food in Mandalay. We were particularly impressed by a place with lots of outdoor seating on 82nd Street (between 29th and 30th) serving delicious, well-priced Shan food.  We could both feast, including grilled prawns and beer for under $10 total! Obviously we went back a second time…

[This post describes our travels to Mandalay, Myanmar from November 14 though 16, 2016]

One thought on “To Mandalay by Boat”