Our initial plan after visiting Sarajevo was to head into the mountains for some hiking and cooler temperatures.  On recommendation from our Slovenian friend, we looked into a mountain house near Sarajevo called Vukov Konak, but it was booked for the next few days. To pass the time, we turned further south to Mostar.  You may be familiar with Mostar from the news in the mid-1990s, when, during the Bosnian war, the Croatian militia destroyed the centuries-old bridge, often referred to as a symbol of the pointlessness of the war. Today the bridge and old town are rebuilt, though some buildings just blocks away remain hollow shells. 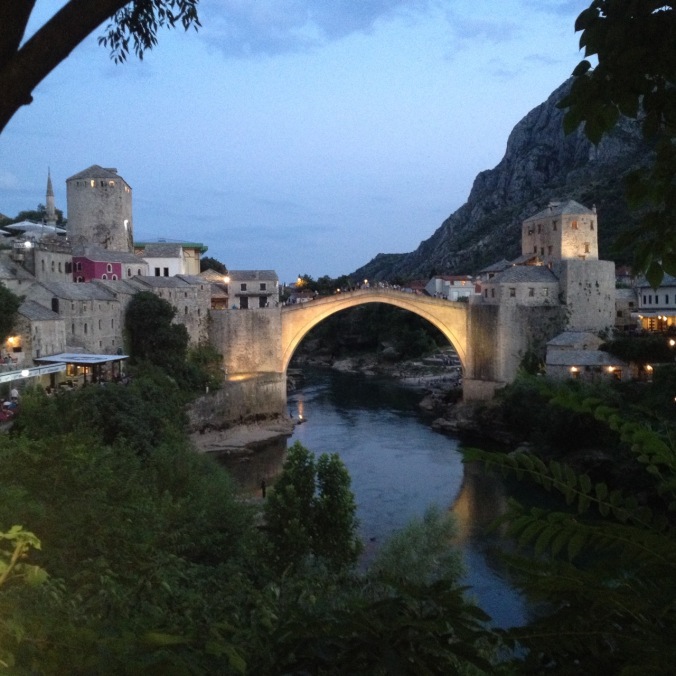 The famous Stari Most (literally “old bridge”) of Mostar.

We enjoyed drinks with a view of the bridge during the day, when we could watch people jump into the chilly water below (five second video here). Bridge-jumping here attracted enough attention to host a bridge-jumping competition sponsored by Red Bull (video here), where they actually built a platform on top of the bridge and the divers did Olympic-style flips. We did not see anyone do a flip. 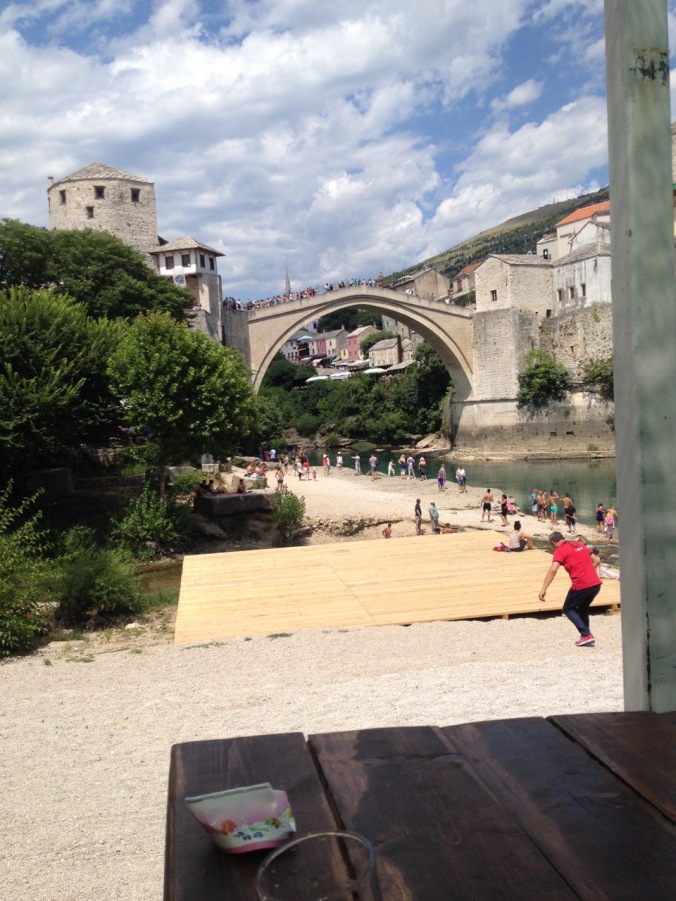 Several travelers we spoke to had recommended Mostar, and it is quite beautiful. But it is also quite small, and too hot for us to just relax, so we soon found ourselves looking for where to go next. Many tour companies offered trips to the surrounding area, so we choose a few attractions and hired a driver to visit the Dervish House at Blagaj, the old town of Pocitelj where we climbed the tower, and the beautiful Kravice waterfall.

Dervish House — Here the river flows out from the rocky cliff, and has been a place of worship for centuries. 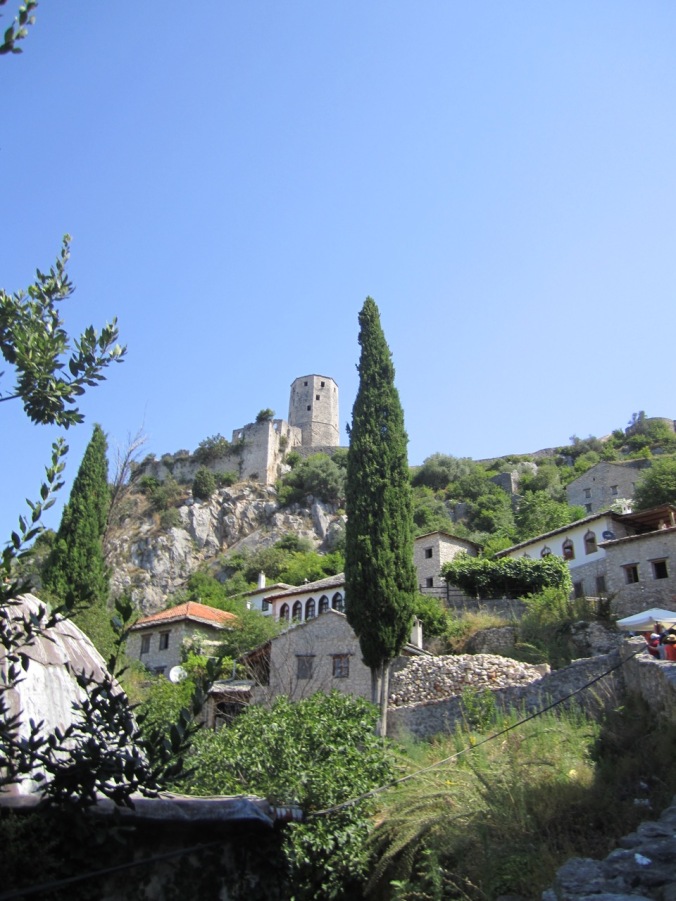 Pocitelj: Want to walk up that?

Of course!  A great view of Pocitelj.

Despite being a warm day at most stops, the waterfall created its own weather, keeping the air around it cool. We still went for a swim in the cold water, but didn’t stay in for long.

The Kravice waterfalls — How to beat the heat! 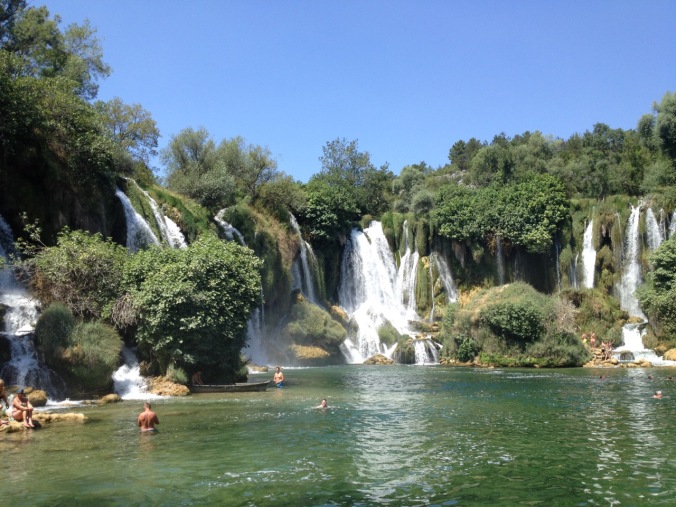 The next day we made our way to Konjic, roughly half way back to Sarajevo, to join a rafting trip. Going on a weekend ensured that the river would be busy with many groups, some more spirited than others — one group even had a supply of beer and sang as a group as they floated down the river.

The river canyon was beautiful but the rafting itself was not particularly challenging. Our coxswain (the guy at the back in charge of the raft) didn’t really understand the physics of rafting, and often sent us for a spin as we went through the rapids. We each took our chance to jump off of a tall rock, but declined to jump from a much taller bridge.

Hanging out during the lunch stop along the river. 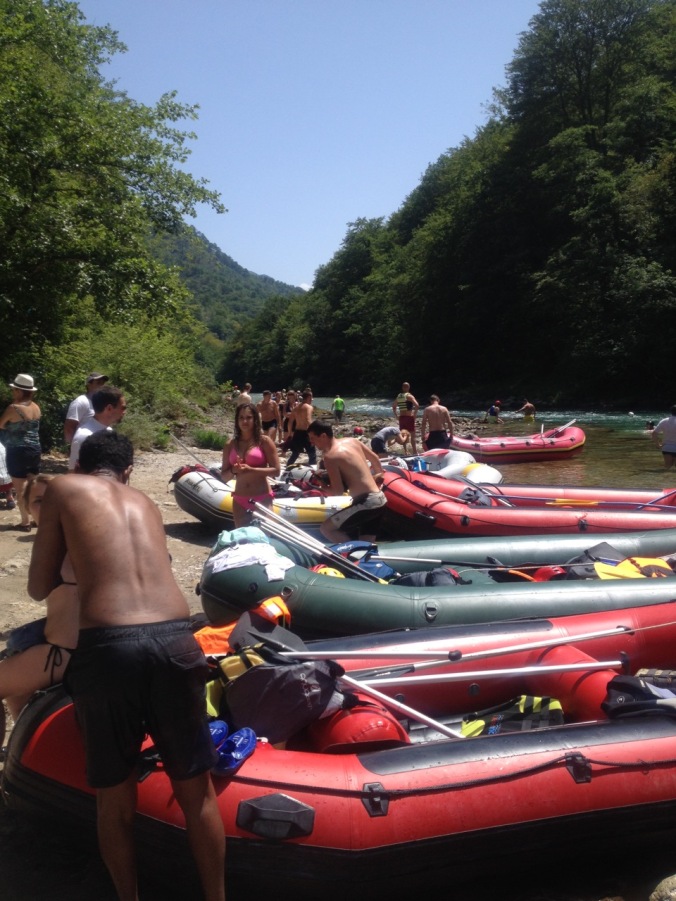 There were lots of boats out!

In front of a few guys from the beer-drinking, singing crew.  Not sure why they felt that wetsuits were necessary as it was hot!

Admittedly we don’t have many pictures of rafting because our cameras spent most of the day in the dry bag.

We finished the evening at a guesthouse in Konjic. Our host brought us a couple small glasses of cherry liqueur that he makes in a large glass vessel near our room. He also left some Rekja (homemade clear liquor, comparable to vodka) in the refrigerator. I tried it — it was not as good as the cherry stuff.

Homemade cherry liquor fermenting on the deck outside.

And since two people had recommended it, we went to Restaurant Han for dinner. No, it wasn’t Chinese — a han is traditional roadside inn.

In all, we found that Bosnia and Hercegovina south of Sarajevo was beautiful and the people were friendly and helpful, but the tourist culture is still oriented around tours rather than independent travelers. Unlike Slovenia, you can’t just show up, get a map, and go hiking, because you would have no idea where to go. This worked alright for our short trip, especially since we finished it off with a stay in a mountain house after visiting Mostar and Konjic (stay tuned for the next post).

[We’re making an attempt to finally get caught up on getting our blog posts up.  This post describes our visit to Mostar and Konjic on July 21-23, 2016.]

One thought on “Mostar and Konjic”