Next stop in Slovenia was the Soça Valley, which is known for its beautiful mountains and roaring river.  We decided to base ourselves for our visit in Bovec.  The town is considered the adrenaline capital of the Soça Valley — a reputation illustrated by our hostel’s offered excursions for rafting, canyoning, kayaking, and skydiving. 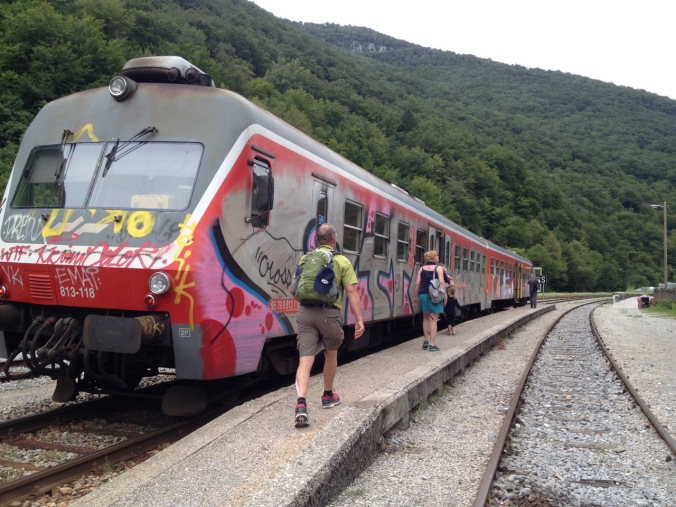 Our train was quite… decorated.

Our journey to Bovec was a bit confusing.  We booked the train from Bohinjska Bistreca to Most Na Soçi, which goes through a long tunnel connecting two valleys that are otherwise not directly connected by road.  The weird thing was that we were directed to get off the train after one stop (after the tunnel) and get in a bus.  We were then transferred back to the train a couple stops later with little explanation.  Our best guess is that some kind of track work was going on.  Our subsequent bus transfer from Most Na Soçi to Bovec went off without a hitch. 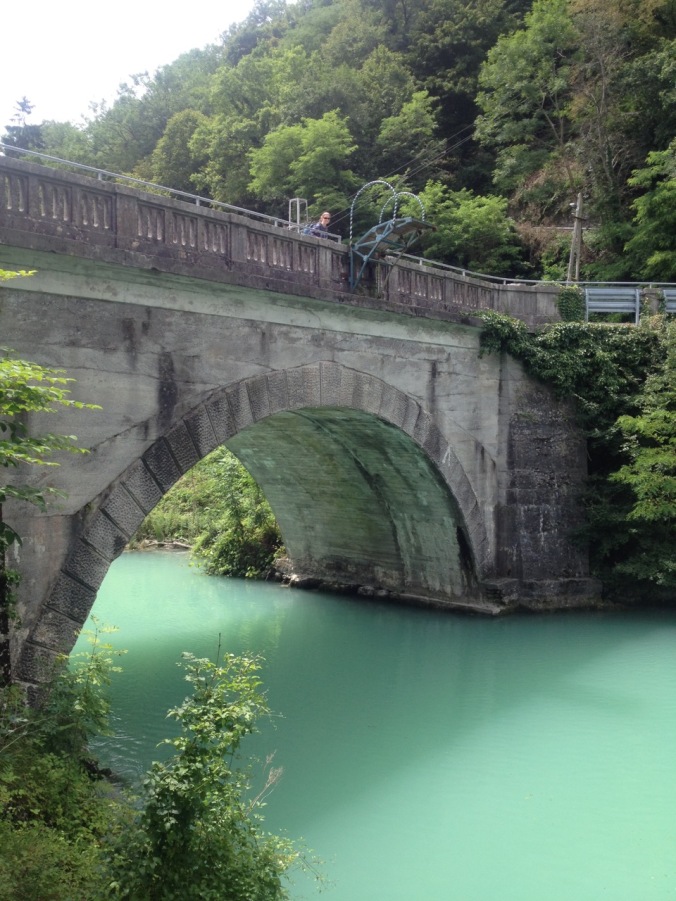 We stopped by the old bridge in Most na Soçi while waiting for the bus.  I had done a google image search of Most na Soçi and was expecting a much more scenic town/bridge.  I’m not sure I would have bothered with the 2km walk into town from the train station had I known that there wasn’t much there, but luckily there was a second bus stop in town so we didn’t have to hike back.

Our original plan was that we would take advantage of the great rafting available in the Soça Valley.  Unfortunately, due to my biking accident I was unable to raise my right arm (very sore shoulder) and my left elbow was in a lot of pain.  We decided to stick with hiking and go rafting in Bosnia instead.  We were excited to hear about the Soça trail, which goes 25km from the source of the Soça river back down to Bovec.

The next morning, we caught the bus up to the source of the Soça river.  Visiting the source itself was not part of the Soça trail, but we decided that since we were there we might as well see it.  Turns out that getting up the trail to the source required some climbing/reliance on steel cables to get around large rocks.  We ended up turning back short of the source because it was too sketchy/uncomfortable with my hurt shoulder/elbow/hand.  Due to the bus schedule and time spent heading up to the source, we didn’t actually get on the Soça trail until about 11am — a bit later than our accustomed start times on the Camino. 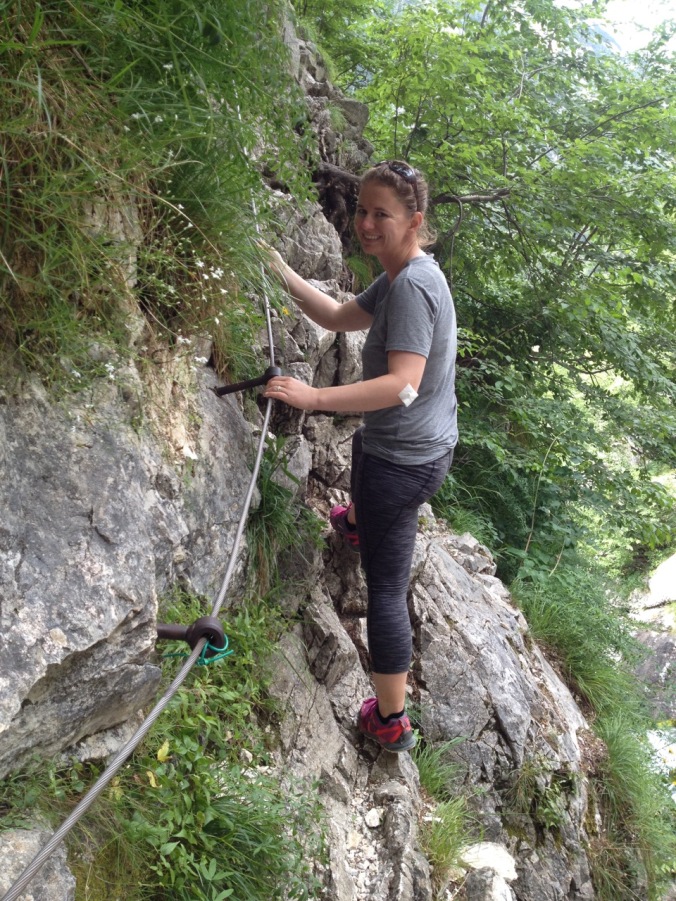 Trail up to the source.  This section was a bit tricky with two-way traffic.

For what was advertised as a largely downhill trail, the Soça trail had quite a bit of ups and downs (or PUDS — “pointless ups and downs”).  The trail largely follows the Soça river, crossing it several times on foot bridges.  We stopped mid-afternoon at a small restaurant (the only one that we saw on the trail) for beers and cherry cake.   We also passed by a cool gorge that provided some awesome views. 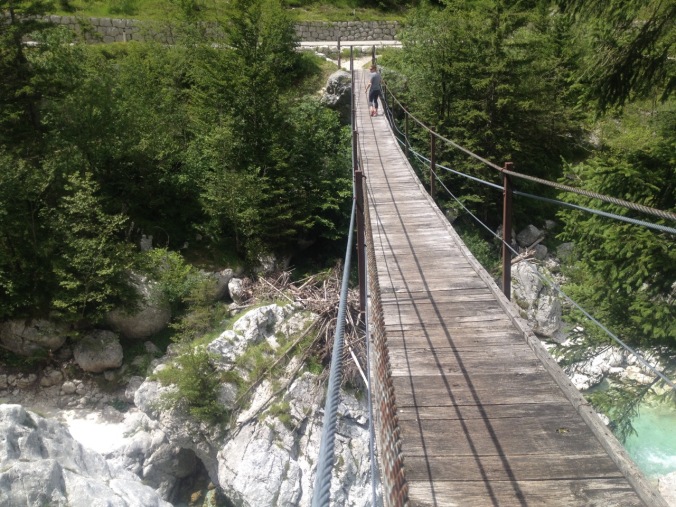 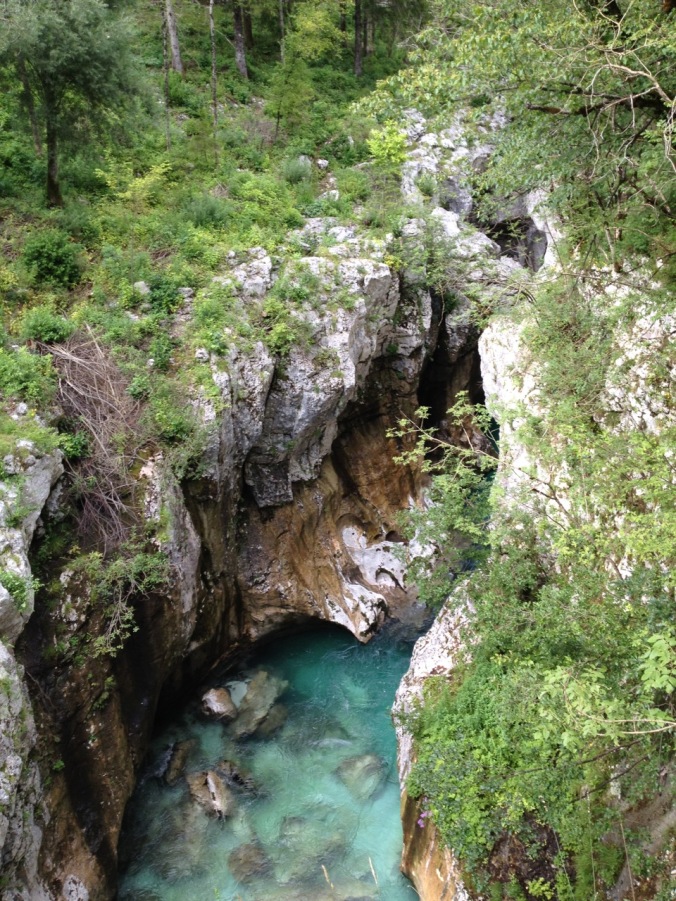 While we enjoyed the Soça trail, we ran into two problems.  The first is that the trail frequently dropped hikers back on the road (or climbed up to the road/shoulder parking area only to climb right back down).  Near the end of the trail, we found ourselves dumped on the road and never figured out where we were supposed to climb back down.  This left us on a narrow, winding road with limited shoulder space for awhile.  We think that we may have made a wrong turn a couple kilometers before, but it’s unclear — the clear trail markers had disappeared at that point. 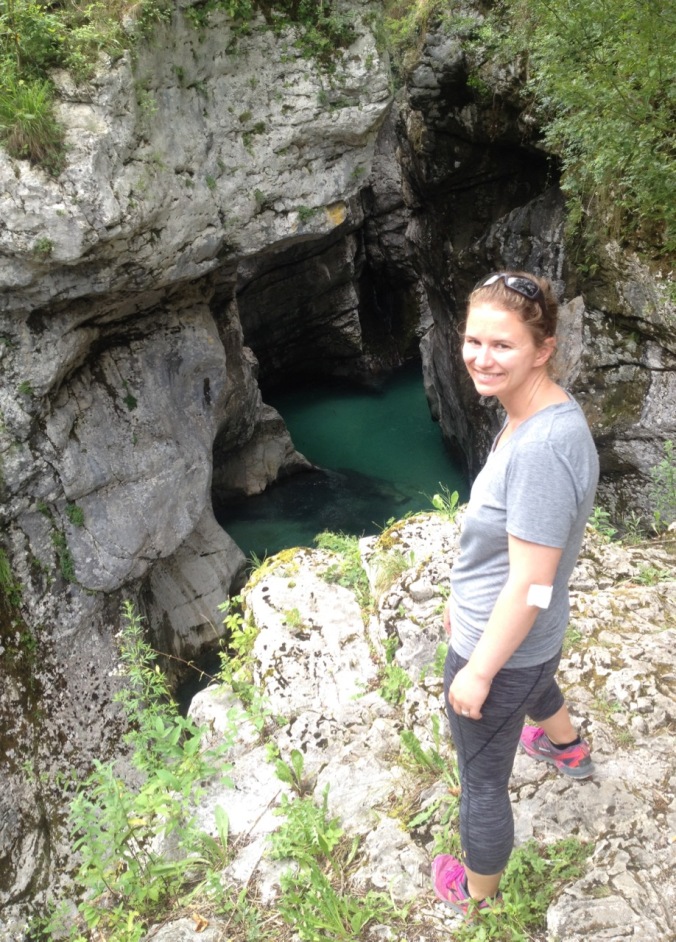 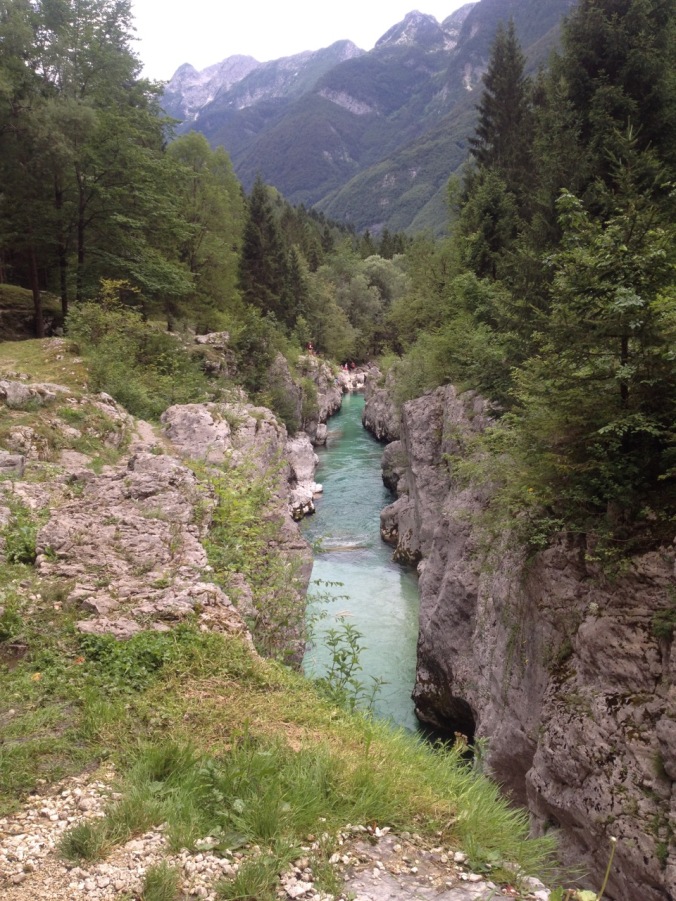 The second issue is that we are pretty sure that the trail is not 25km as advertised.  Michael turned on the Strava app when we started walking and it tracked our route using the phone’s internal GPS.  With several kilometers left before we got back to Bovec, the app indicated that we had already walked about 30km.  Had we known the trail was longer, we would have tried to get an earlier start.  Since it was getting late and we ended up dumped out on the road, we decided to try to hitch a ride back to Bovec (hitching is very common in this area).  A young Swiss couple soon stopped to give us a ride (after rearranging the bicycles in the back seat).  Even though it wasn’t far to Bovec, we were happy to avoid further road walking — we were exhausted! 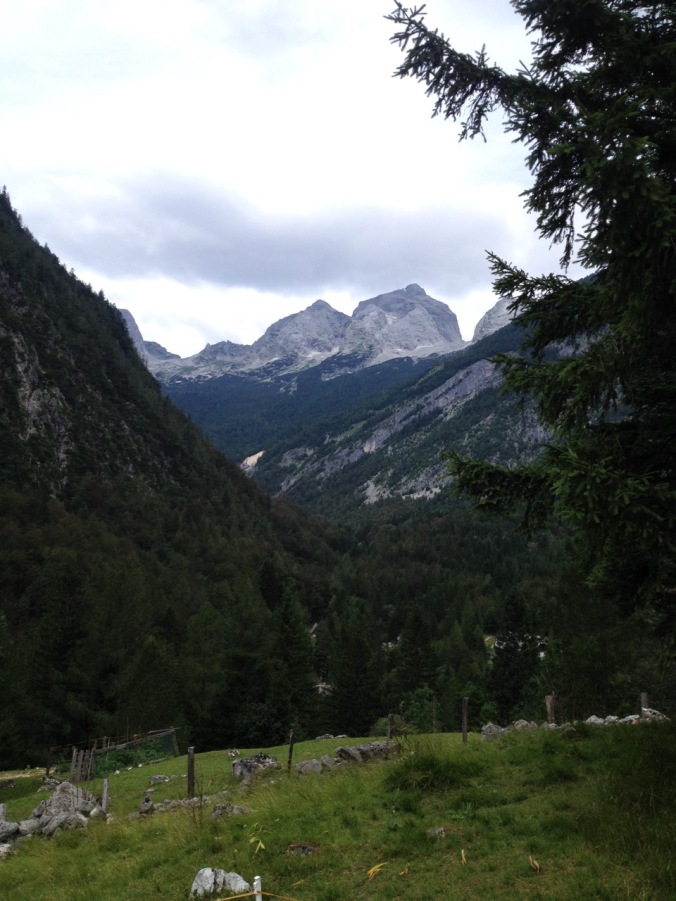 View of the mountains along the Soça trail.

Although Soça Valley was beautiful and we had contemplated potentially staying longer, we decided to limit our stay to two nights in order to finally make our way out of the Schengen area.  Our hope was also that after a few days rest, I would be up for rafting and more hiking in Bosnia.  The next morning, we caught a bus over Vrsic pass and back to Ljubljana so that we could catch an early morning trail to Sarajevo.  Of course, this meant that we got to enjoy another lovely evening enjoying Ljubljana’s good food and craft beer.  Perfect! 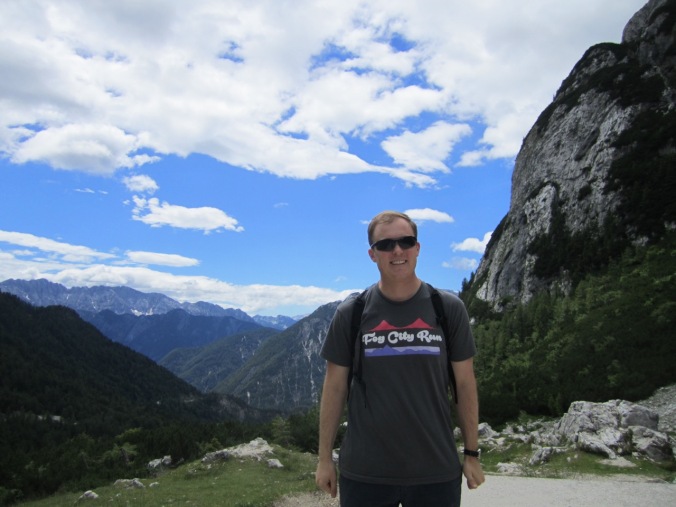 Michael at Vrsic pass.  The view was amazing! 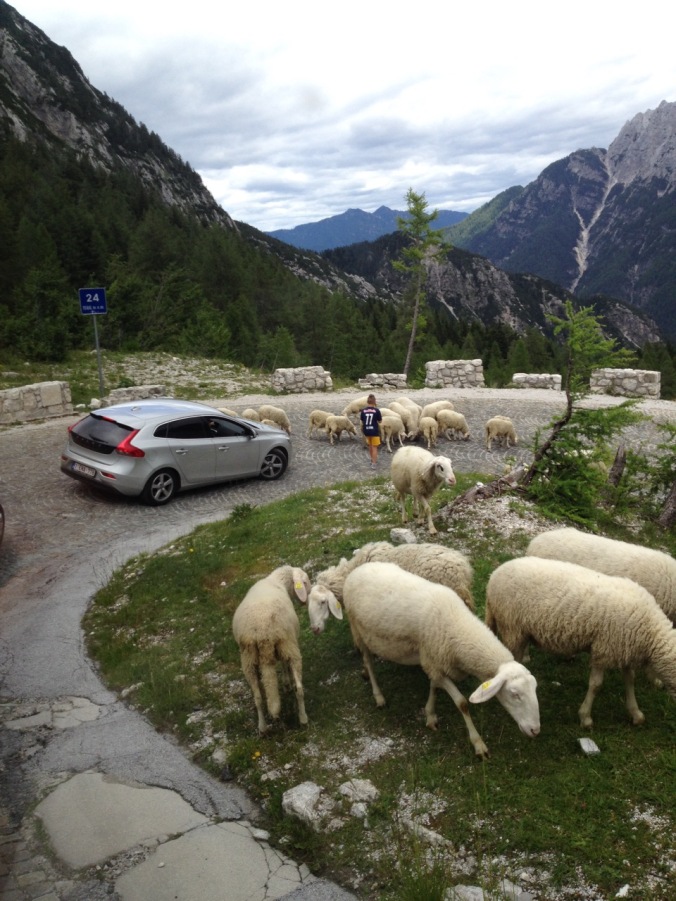 [We’re making an attempt to finally get caught up on getting our blog posts up.  This post describes our visit to the Soça Valley on July 15-17, 2016.]