Following Fes, we decided to visit both the white and blue cities of Morocco.  First up was Moulay Idriss, the sacred white town on a hill.  In 789, Mousey Idriss I arrived in the town, bringing Islam to the area.  We were told that the town is still considered so sacred that if a Muslim visits Moulay Idriss six times during its annual festival, it is considered the equivalent of one Haj to Mecca.  Non-Muslims were only recently permitted to stay overnight in Moulay Idriss (in 2005), although they still cannot visit the mausoleum (a trend in Morocco).  Before that, non-Muslim visitors were advised to leave town by 3pm. 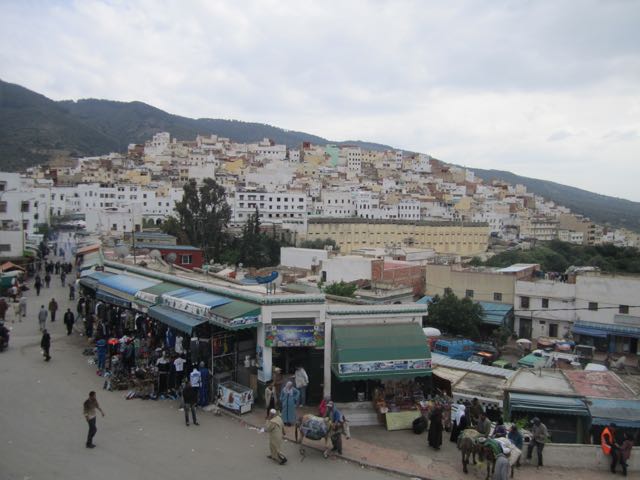 Moulay Idriss from one of the viewpoints.

After a short train ride and a shared taxi, we arrived in Moulay Idriss, dropped off our stuff, and headed out to the neighboring Roman ruins of Volubilis.  We hired a guide at the entrance and were walked through the ruined city.  The site is fairly extensive and is filed with lovely mosaics in situ. 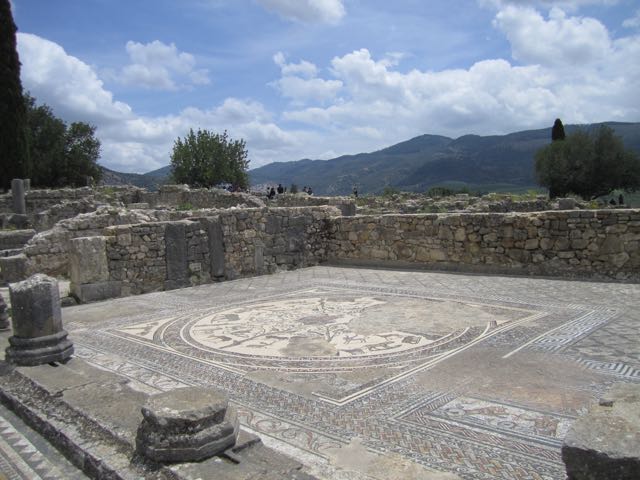 One of the many mosaics. 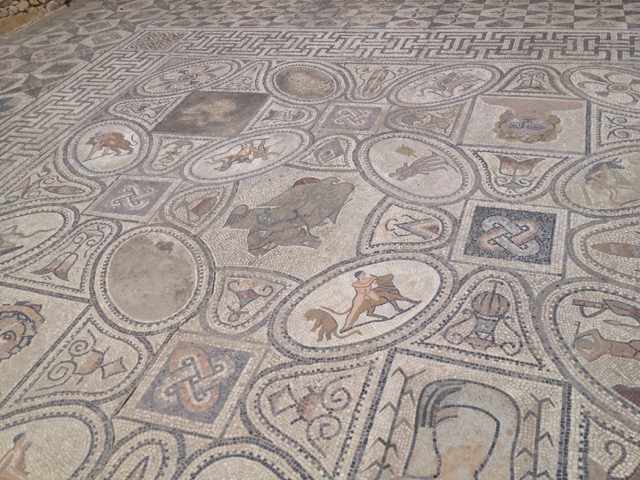 Another mosaic, up close. 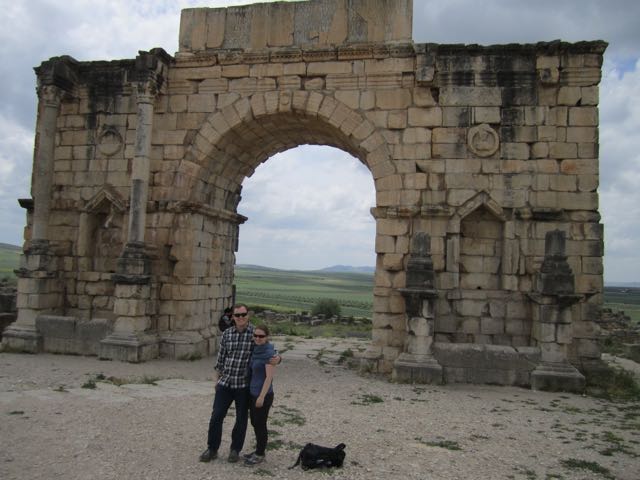 The gate has been rebuilt as part of efforts to excavate the city.  Many of the stones were removed over time as building materials.

Overall, we enjoyed having a guide to explain the site layout and to point out the perimeter of some of the larger residencies.  Following out tour, we risked the ugly clouds to explore the ruins a bit more on our own. 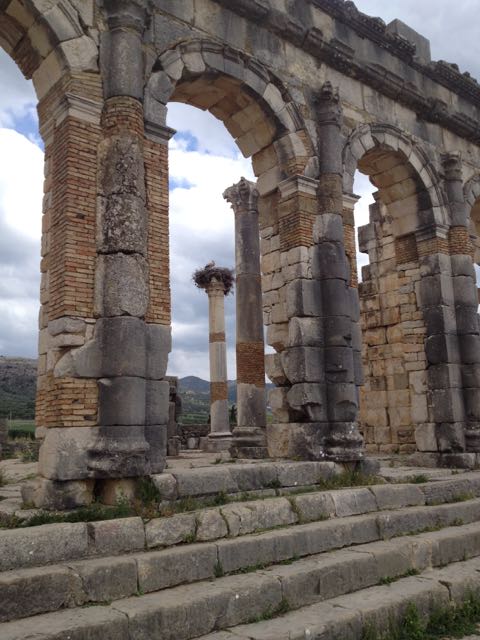 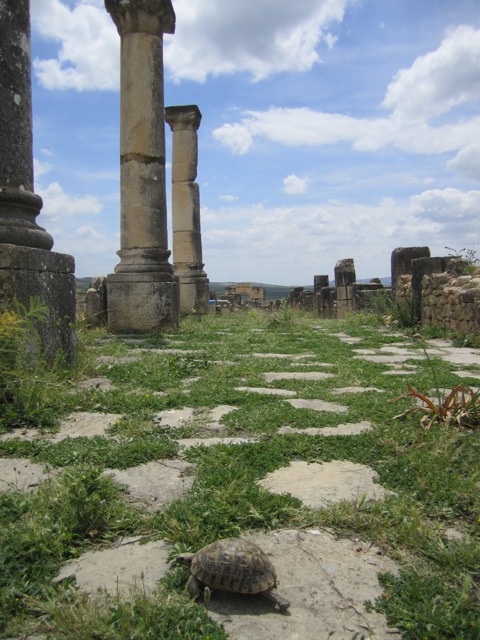 We spent the rest of the afternoon exploring Moulay Idriss.  I had read that there were a couple terraces from which to get great views of the town and that there were Roman baths nearby that were on the site of natural hot springs.  We set off in search for both.  As our guidebook had no map of the town, and we weren’t able to acquire one from our hotel, we used the guidebook’s vague description and set off on our search (although it made no mention of the baths at all).  Hiking up the hill, we wound through the town’s narrow passageways, but were unable to find the elusive terrace. 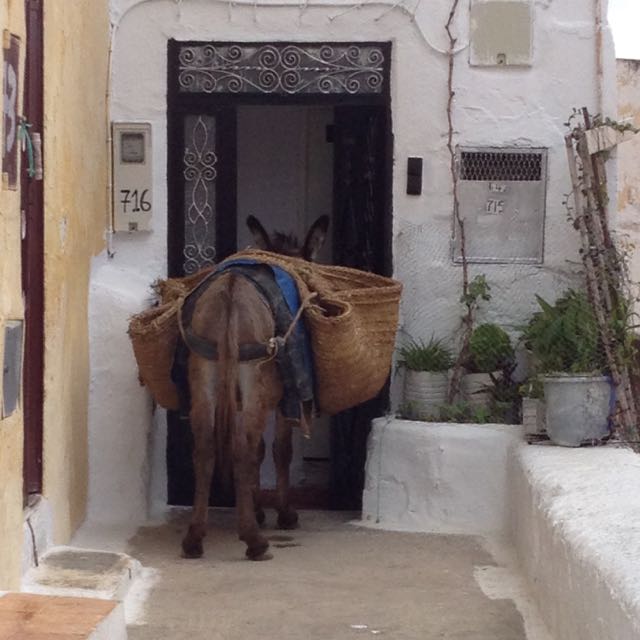 We ran into this guy at a dead-end during our exploration of Moulay Idriss.

Finally, we got a couple decent tips from locals and made our way out of the town, through the hills, in search of the Roman baths.  When we finally spotted the baths in the distance, we were excited to take a dip as the reward for our hour+ search.  But alas, they were empty.  Walking further up the hill, we found that we had backtracked and were now above Moulay Idriss and heading back down.  On our descent, we ran across one of the previously elusive terraces… basically right back where we had started.  (View of the twon above is from the terrace.) 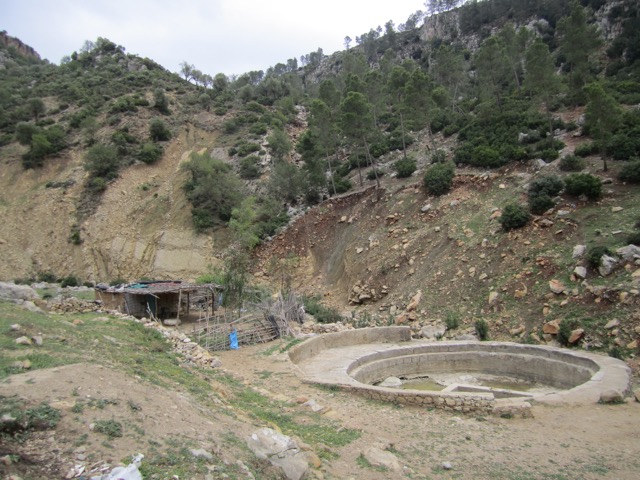 The next morning, we were off to Morocco’s blue city — Chefchauen.  We had a couple hours en route to explore Meknes and after a four hour bus ride (with some very typical confusion with the so-called “direct” bus), we arrived in Chefchauen. 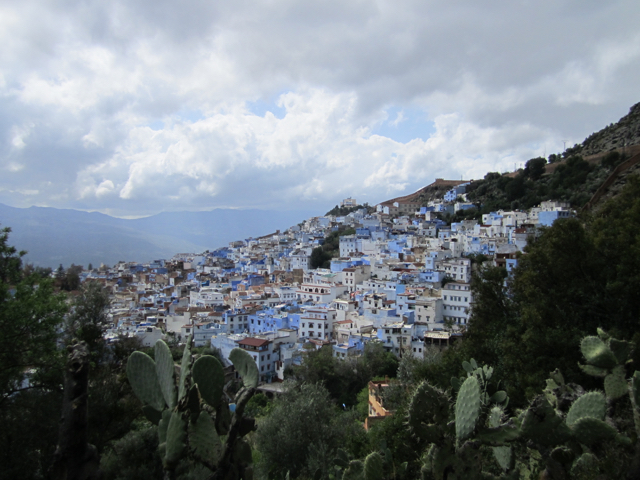 From a viewpoint across the way.

The town is adorable.  Most of the buildings are painted blue.  Every twist and turn in the medina is a photo opportunity.  Unfortunately, our exploration was hampered a bit by the rain and by our ongoing attempts to figure out our options for quickly getting to the staring point of the Camino.  Between storms, we managed to explore the blue passageways and hike up to a viewpoint above the city. 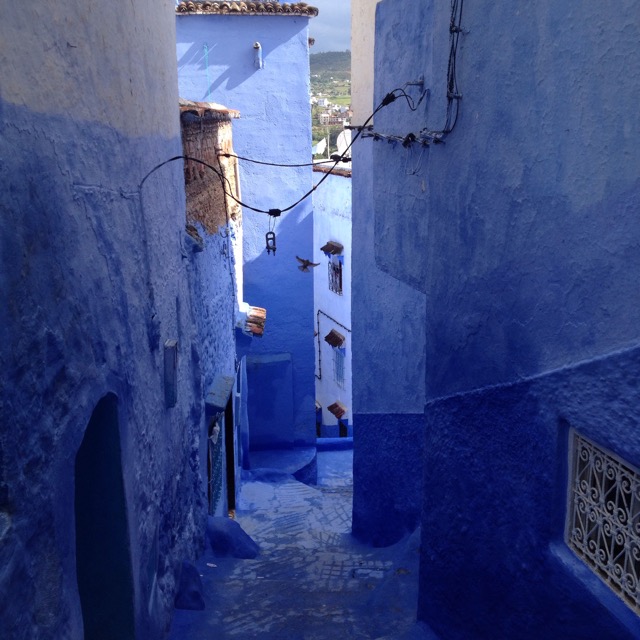 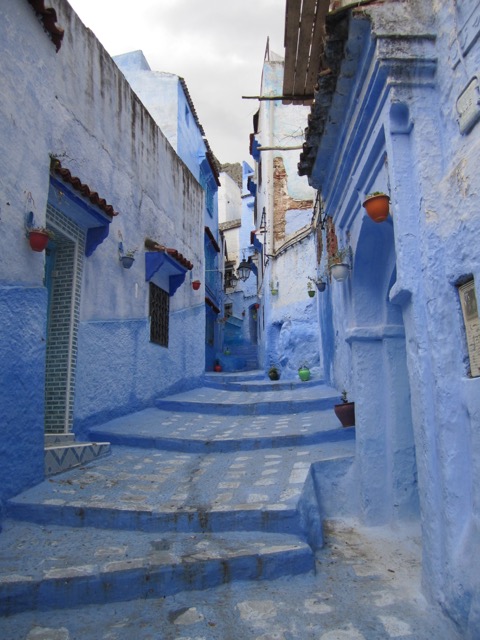 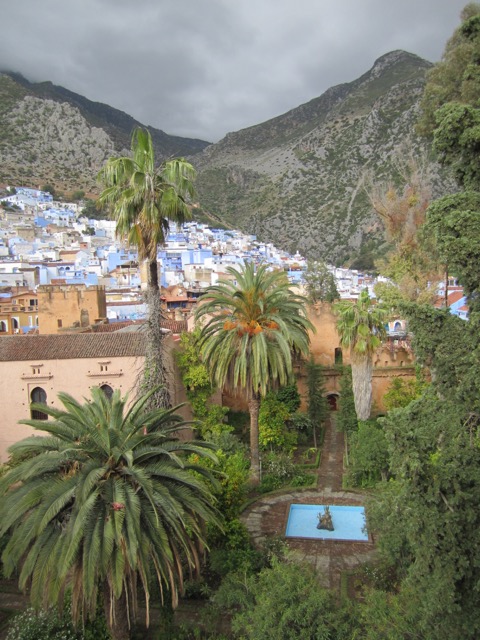 We also both took a bath — more specifically we visited the local hammam (Moroccan bath house).  After comparing notes, it became apparent that we had very different experiences, which we plan to write up in separate post.

Chefchauen ended up being a great change of pace from the bigger Moroccan cities.  While it is still touristy and certainly can’t be called “off the tourist path,” it is somewhat less visited and had less aggressive touts.  If it wasn’t for our Camino-itch, the town would have been a great place to hang out for a few days to relax and regroup.