Sleeping in is one of the most glorious parts about hotel stays… even if I’m only able to sleep until about 6:30 before waking up (convinced that it’s actually 10am). Oh well.

We took advantage of the hotel’s free breakfast and 11am checkout time to take our time completing our internet chores and packing up. It’s amazing how quickly town time can pass. After checking out, we started trying to hitch to downtown Ashland so that we could check out the outfitter there (Mountain Provisions) for Altra shoes. We were told by another PCT hiker that hitching around here would be tough, but that there was a bus that ran to the downtown area leaving soon. We headed toward the bus stop and ended up running to catch the bus as it pulled away (and then kindly stopped to wait for us). 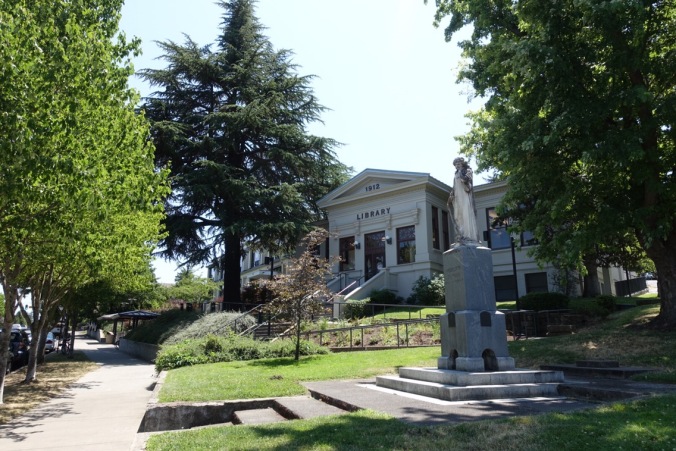 I normally wear size 6.5 shoes but have been wearing size 7.5 on the trail. I tried on the size 8 shoes and, while they are very roomy, decided that they should work. Better than having my feet squished like they were for the last 60 miles!

I also checked out the rest of their gear for a tank top that would provide back and shoulder coverage, but with no luck. I guess I’ll stick with the short sleeved athletic shirt I’ve been wearing the past few days since Seiad Valley. The people at Mountains Provisions were super helpful, even assisting us in taping up the new shoe box with my old shoes to be sent home (I think they’ll be fine post-PCT). I considered mailing hike my long sleeved shirt, but decided to hold onto it for a bit longer in case the sun exposure is bad.

Michael’s Note: they also had a big friendly fluffy dog. I made a friend.

We enjoyed the rest of our picnic provisions in the little park in the middle of downtown Ashland. It’s such a cute town and it’s a shame that we didn’t have the time it energy to explore it more. Future vacation ideas! We swung by the Post Office to mail home my shoes and then caught the bus back toward our hotel, which was near the on ramp for I-5 (our planned hitching spot).

That’s when things went sideways. A man stopped by to say that he could offer us a ride to old highway 99, but he wouldn’t be going all the way to the trailhead. No problem, we told him. We assumed he meant that he could get us to Callahan’s — that’s where it looked like highway 99 began according to my map. The man was nice and told us about his own adventures. Only problem was that he didn’t get on I-5 like I expected. Oh well, I figured, he must be taking the back way.

Turns out that highway 99 is a lot longer than we thought it was. He turned into a road in the middle of nowhere and announced that this was highway 99. We got out. It was another 7 miles along this twisty road to even get to Callahan’s. There were almost no cars going by. I guessed that those that did weren’t going all the way through. The road we’d turned off of was busy and we started to discuss whether we should try to hitch back to Ashland and try again. Finally, just as we were giving up, a woman pulled over and asked where we were going. We explained the situation and, even though she had kids in two car seats in the back of her compact, she invited us in for the ride. It turned out her destination was only a minute further down the road (blueberry picking), but she drove us all the way to the trailhead. It easily added a half hour of driving to her day since she had to get back. It’s amazing how we are constantly running into such altruistic people that are willing to take time out of their lives to help perfect strangers. Disaster quickly turned to relief for us and we were back on trail. No free beer from Callahan’s for us, but given that we’d been finish the beer that we purchased yesterday at 10am this morning this seemed okay.

The “trail” that we were dropped off at was really just highway 99, which the trail follows until after it goes under I-5. Then it was the typical ascent with packs heavy with food to get out of town. The trail actually turned south for a bit before heading east, away from Ashland. 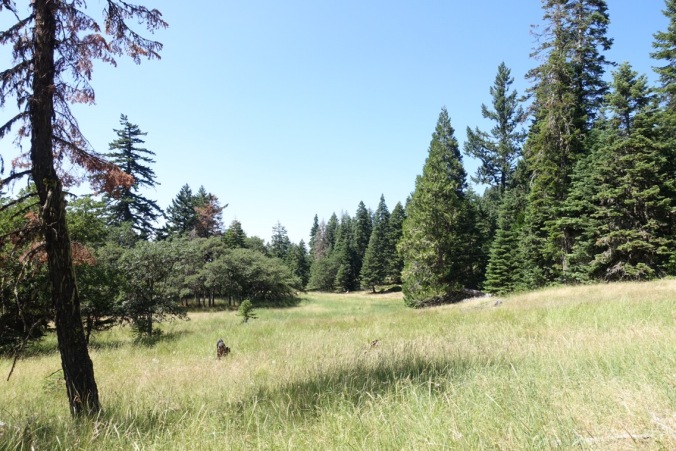 The climb was uneventful, but did have some lovely views. We had a nice look at Pilot Rock, which is an oddly shaped rock formation that juts out of the ground below. I guess it’s a popular climbing destination, but is currently off limits to protect the bird breeding habitat. My new shoes seem to be doing well, but I’ll need to work on figuring out how to lace them a bit tighter so that they stay in place. 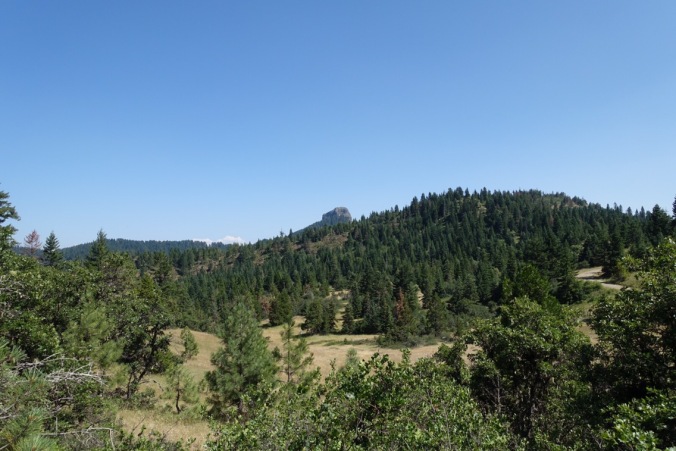 Pilot Rock in the distance.

Our plan for the day was to make it at least to a piped spring about 9.5 miles in. When I got there I was surprised to see Valley Girl and A-Game! I had figured that they would zero in Ashland, but I guess they beat us back to the trail today. Even though it was 6:30, they were planning on hiking another 6.5 mikes so that they could camp near their PCT halfway point (ours too since we did the same skip). Crazy! 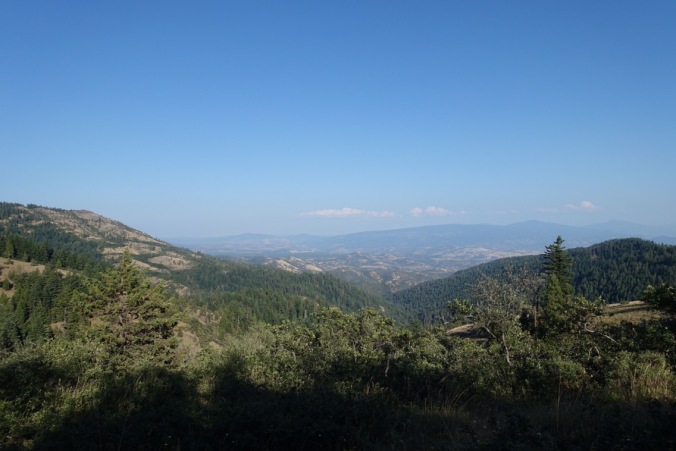 We made it less than a tenth of a mile further when we found a great tent spot hidden in the trees. We whipped up dinner and then it was bedtime (probably before A-Game and Valley made it to their camp spot).  Not a bad day for such a late stat onto the trail.

﻿Michael: none too bad.

Happy Earth Day from the fog and the redwood forest below it.
More Dipsea stuff
For a late birthday celebration, I convinced my dad to drive to Stinson Beach and pick me up at ~8:15 so that I could hike/run the Dipsea Trail before work. Great morning below and above the clouds!
Parents visit activity # 2: Hike down into Muir Woods, then run back up to the car, drive down and meet Mom & Dad outside the front gate. Bonus: owl above the Canopy View Trail.
Visit to the Marin County Civic Center with Mom & Dad. Great to visit my favorite courthouse. Frank Lloyd Wright’s design is beautiful. And we couldn’t even go inside (on a Saturday).
Morning panorama