We woke up at 4:30 again this morning even though we only had about 18 miles to get to town. We knew that there were another few miles of snow and we wanted to get to it while it was still crunchy. The climb up from the spring seemed like a steep way to start our day, but soon we were cruising. 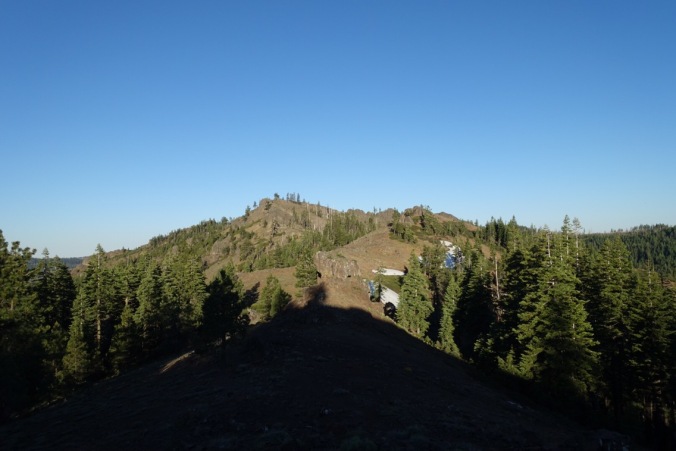 The early morning was filled with huge vistas as we walked across the ridge line. This section was also part of a 15-mile dry stretch. We’d filled up our bottles from the spring where we camped (1.6 L) and hoped that we’d encounter some runoff from the snow that we’d be crossing to supplement. 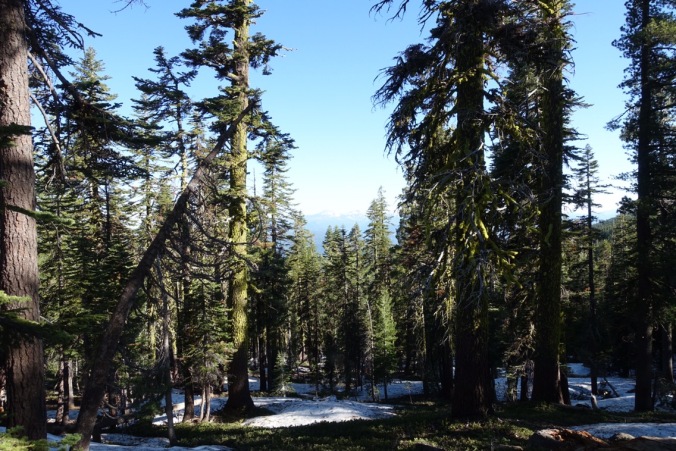 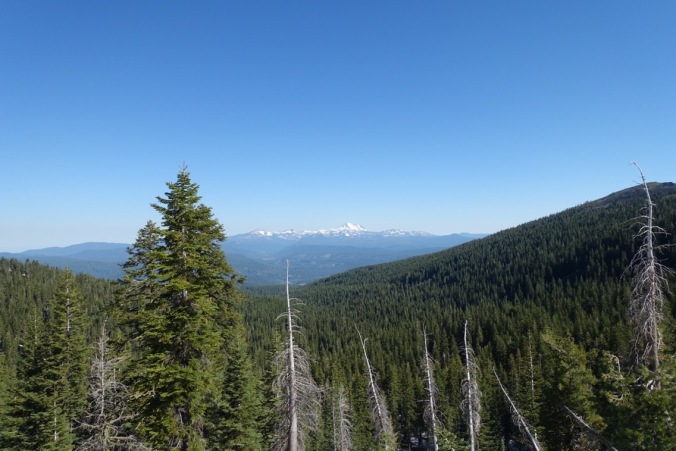 Mt. Lassen in the distance.

We ran into Another One again this morning (still in his tent after 8am!) as we passed the turnoff for one of the last known water sources — a spring 0.7 miles off trail. He warned Michael to go fill up at the spring, but Michael declined since he had enough water already. About 0.1 miles later we encountered our “seasonal spring.” We chuckled at what we imagined would be Another One’s reaction when he found water after going off trail for a (presumably) steep 1.5 mile round trip hike to get water. We cameled up and were on our way.

We’d been expecting the snow to start right around mile 1316, but were pleasantly surprised when we got another mile or so of reprieve before the patches started. Matt took the lead once again as we made our way further up the mountain. We managed to avoid traversing one of the steep slopes by staying up on the ridge. Then it was route finding through the trees for a bit (or at least Matt was route finding, we just followed). As with yesterday’s section, by following Matt’s lead today’s snow section likely went much further than it would have had we done it on our own. As it was, we were clear of the snow before 10am! 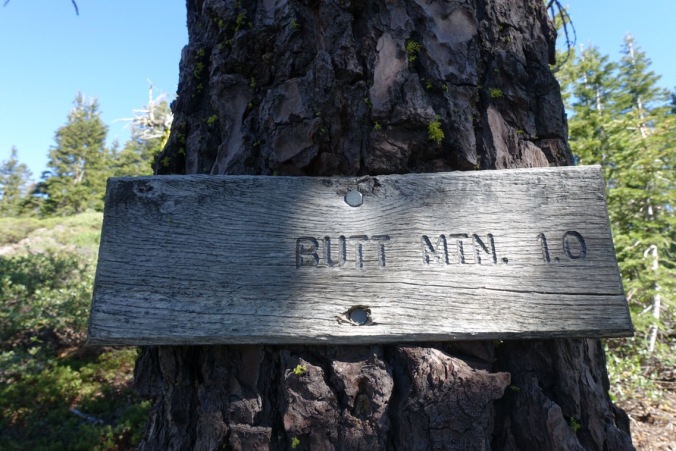 I found the name of this mountain way too amusing. 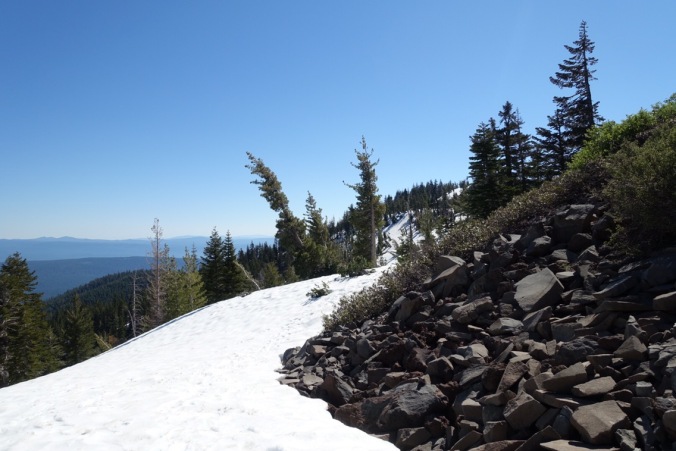 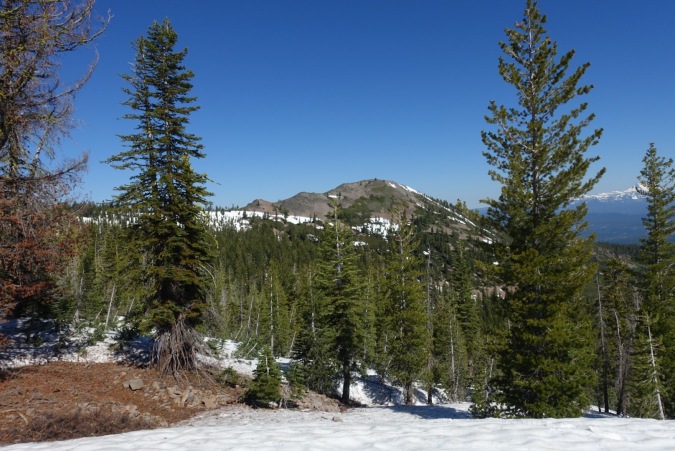 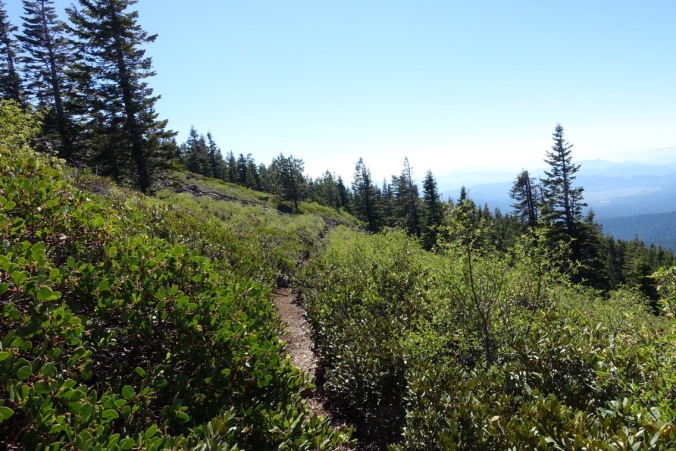 A few miles later we stumbled upon the official halfway marker of the PCT! Admittedly a little less exciting when you know you have to come back to make up 400 of those 1325 miles, but still worth the photo opp. I’ll have to keep track of when we reach 1325 miles total and we’ll do our own celebration then. 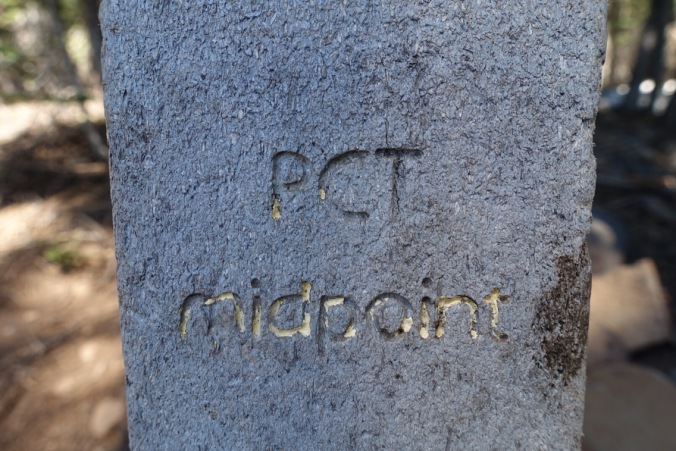 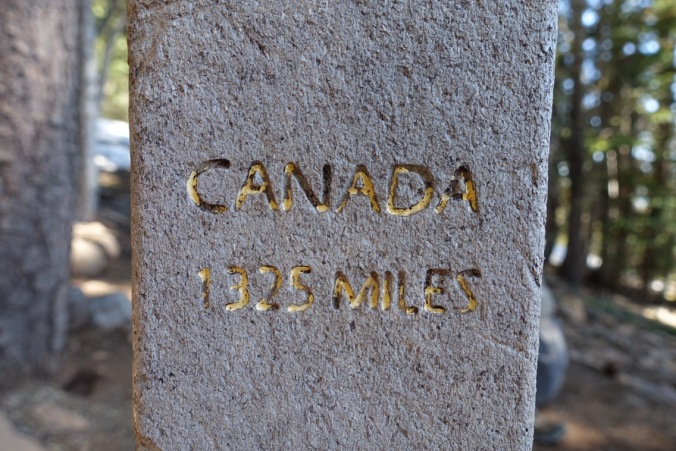 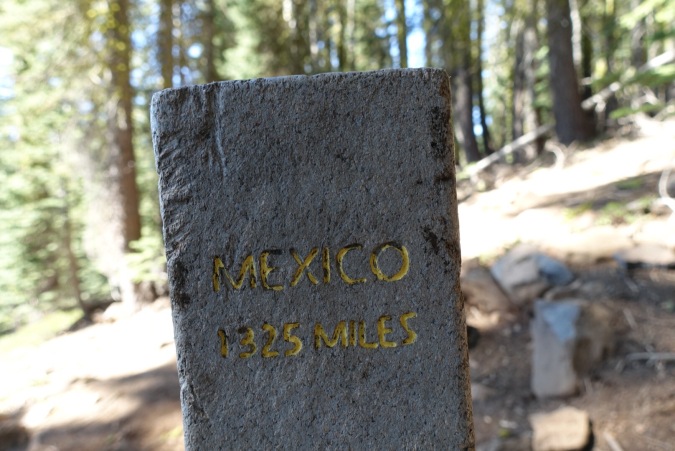 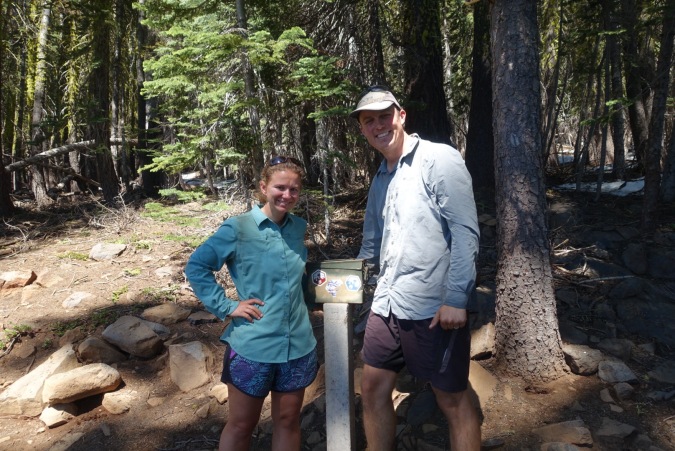 From the halfway point it was largely downhill along the tree-covered mountainside. Good thing it was tree-covered, because it was hot! The three of us walked separately, meeting up for lunch at the first available water source before pushing on. Town was beckoning! 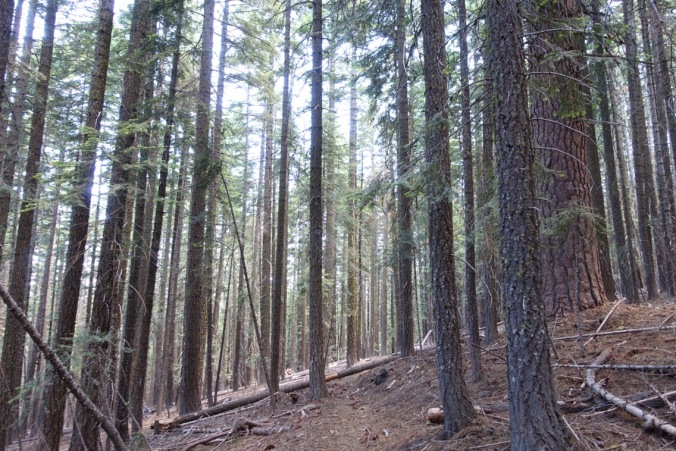 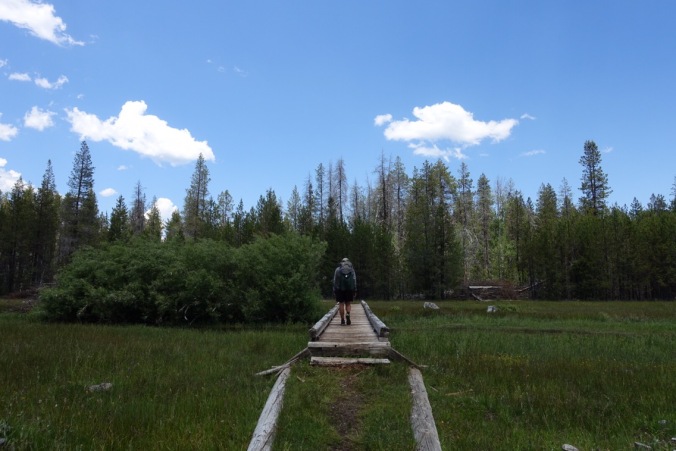 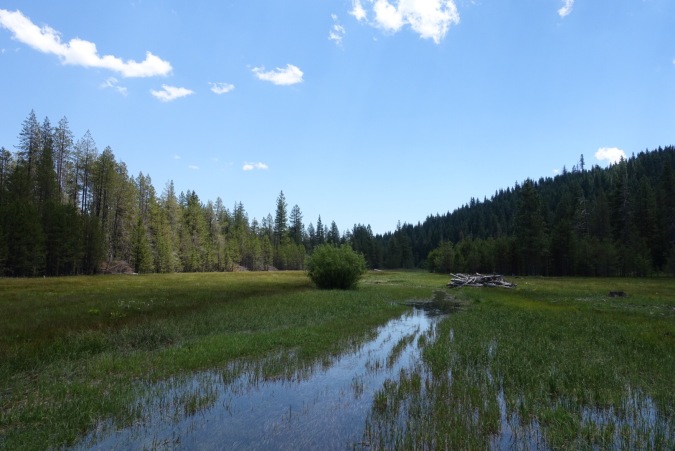 Good thing we had the wooden bridge to cross this meadow! 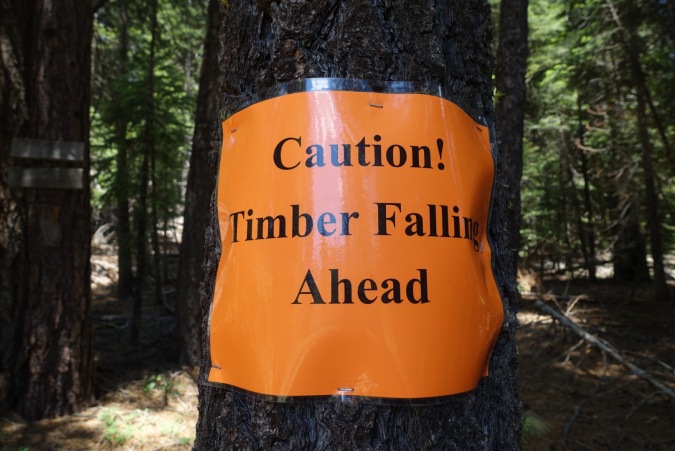 We crossed a large meadow before a short uphill climb to the highway. When we got to the road we started to worry. There was construction going on and a lead car was being used to direct traffic in a single direction at a time. How could anyone pull over under these circumstances, even if they wanted to? As soon as all three of us were at the road I stuck out my thumb. The group of cars going in our direction had almost finished passing, only a few semi trucks and a California Highway Patrol (CHP, our state police) vehicle were left. Matt commented that there was no way we’d get a ride. And then the CHP vehicle pulled over and a hound officer was offering us a ride to Chester. Score!! The officer was super nice and knowledgeable about the PCT in this area. He gave us food recommendations in town and told us about the history of logging operations in the area. An all around awesome guy and we were grateful for the lift.

Once in Chester, the big electronic temperature reading on the side of one of the buildings was 95 degrees! We decided to start our town day inside with milkshakes at Pine Shack Frosty. There were 30 flavors to choose from — we settled on boysenberry and chocolate/cherry. They hit the spot! 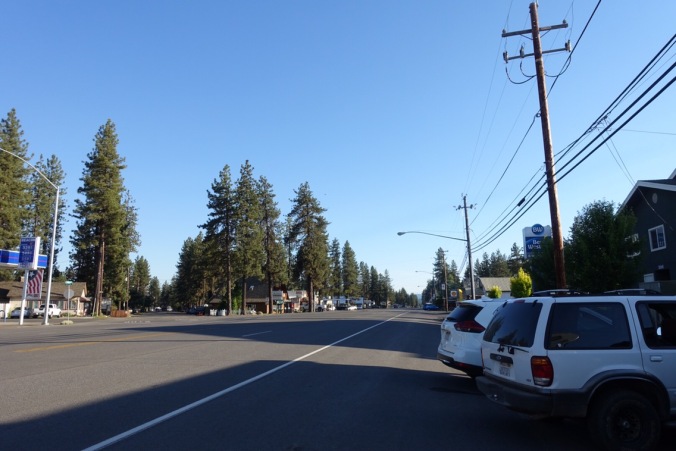 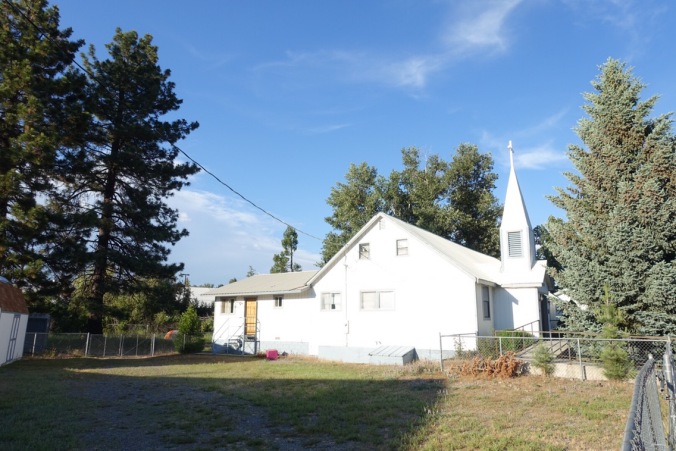 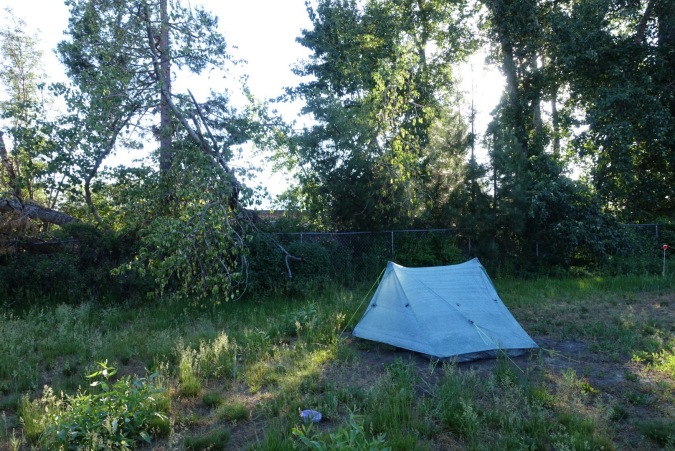 Our tent the next morning after everyone else had packed up and left.

We spent the rest of the day hanging out behind the Lutheran church (which kindly offers free camping to hikers), grabbing dinner at The Locker Room, and socializing with other hikers. The town is pretty hiker friendly and I’m glad we ended up stopping through since we originally intended to pass Chester by without stopping.

Tomorrow we’re being picked up by Terry, a friend of Michael’s family, who has graciously offered to pick us up and help us get to the Reno airport so that we can fly to New York to attend another wedding. We ended up arriving in Chester a day before we’d expected (thanks to the absence of serious snow), so we get to sleep in and relax tomorrow morning!! Such a nice treat after our 4:30am wake ups!