Considering how little experience we had with hitchhiking prior to starting the PCT, today’s goal was a big one: hitchhike over 400 miles from Bishop to Sierra City.

After breakfast, we headed to the north end of town and stuck out our thumbs. Lots of cars passed. Michael got to work on making our Tyvek ground sheet into a sign that read “PCT Hikers” in the hope that would attract more interest. Before he could finish the sign, a woman pulled over and we had our first ride! She was only going to Mammoth, but that would at least get us going.

Our first ride was… interesting. The woman drove incredibly slowly and talked almost nonstop. Not really sure was half of it was about because of her heavy accent and the frequent non sequiturs. It was the first time we’ve been picked up that someone didn’t seem at all interested in our hike. She dropped us off at the onramp out of Mammoth and we stuck out our thumbs again.

While it was warm in Bishop this morning, it was cold in Mammoth. A storm was coming. As the cars passed us we added layers. Michael finished the sign and sure enough people started to notice. A couple stopped to say that they were only going a few miles down the road — not ideal for hitching so we thanked them and continued to wait. Then Greg showed up in his camper van and offered us a ride to Lee Vining. Yay! He was fun to talk with, especially since he is also from SF and has just adopted a more nomadic lifestyle. Reminds us of our last year of travels. We made a side trip to visit Mono Lake (which I’m not sure I’ve done before), and then sadly had to say goodbye to Greg. Happy adventures and thank you! 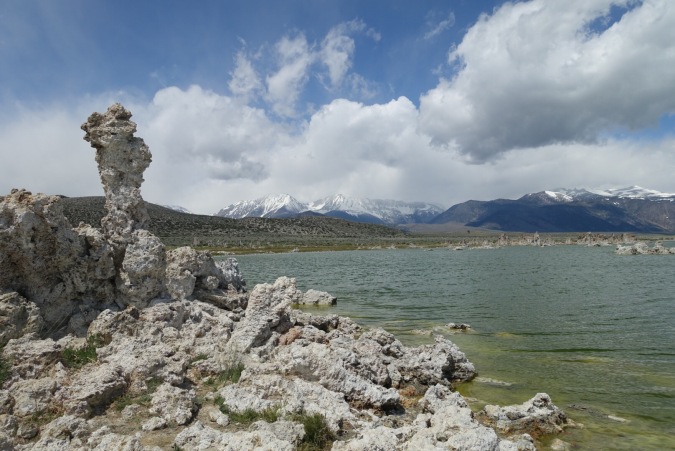 The highway goes straight through Lee Vining, so we had an ideal hitching location. Which is a good thing, because it was already noon and we still had a long way to go. The weather threatened to turn bad at any moment and we almost gave up on hitching to stay warm and dry in the cafe. And then someone pulled over! He was on his way to Sacramento (and I’m feeling stupid for not getting his name) — just the hitch we needed! For the next few hours we were set! It was so nice not to have to try to hitch in Reno or Tahoe and instead to just relax and chat for awhile. He was a contractor heading home to Sacramento and knew a lot about the area. Finally we parted ways near Truckee and waited for our next hitch.

We knew that hitching to Sierra City wouldn’t be easy. From Truckee we hoped to find someone going to Sierraville and then figured we would have to get another hitch from there. When Jennifer pulled up and said she was on her way to Sierraville we were excited. We were even more excited when after chatting for a bit, she announced that she was going to drive us all the way to Sierra City (at least an extra 45 minutes round trip for her)!! She told us about how someone had done something similar for her when she was hitchhiking around Australia back in the ’80s. Still super nice of her to take extra time out of her day today to help us out. It was another ride with interesting conversation to cap off our day of hitchhiking. Thank you Jennifer!

We arrived in Sierra City just as the General Store was closing (early). The owner opened the store back up so that we could grab some ice cream — I hadn’t had any for the last couple days and even though it was cold and a little drizzly I had to have some! Sitting at the store eating my ice cream made me especially grateful for that last hitch. There were virtually no cars driving through town. It feels like we’re in the middle of nowhere.

There are several other PCT hikers here, some of whom skipped here from Bishop and a couple who skipped to Truckee. We’re all camped tonight behind the Methodist Church. It’s been sprinkling and will probably continue to rain overnight. The forecast for tomorrow shows the rain continuing until about 4pm. I guess we’d normally try to wait it out, but we’ve already taken 3 zeros so if it’s not looking too bad we’ll probably head out in the morning and hope all goes well.

It’s exciting to finally be here and having the decision to skip behind us. Hopefully our decision pays off!

One thought on “Day 55: Hitching to Sierra City”