We were woken last night by the wind, which came as a surprise because it was calm last night. We’d staked our tent in a fairly sandy area and Michael realized that one of the stakes had come out during the night (which he was able to fix without getting out of bed). It wasn’t until our alarm went off that I realized that the stake near me had also come out. No wonder our tent had become so loud in the wind. It was flapping around and we’re lucky it hadn’t simply collapsed on us!

The morning was cold and it seemed to get colder as we hiked on. We even started seeing frost on bark alongside the trail. Looks like our Sawyer filters will be sleeping with us from here on out.

The poor trail here has a rough time of it.

Throughout the morning we passed several little creeks, many of which ran along (and into) the trail and weren’t listed in any water source. We sadly also passed through yet another burn zone. I guess we didn’t leave those behind entirely! We passed a few occupied tent sites during our first few miles — I guess people aren’t adopting early rising routines yet since we haven’t hit snow yet.

The mountains in the distance are snow covered!

Our first big river crossing of the day was crossing the Kern River. Over a bridge. Easy! Then the climb began. The incline wasn’t too bad at first, a fact that I discussed with another hiker that I passed during his break. The next time I saw him, he noted that he’d been wrong to comment about the gentle grade — it had become much steeper.

We crossed this creek several times. It was a challenge to keep my feet dry.

Between the grade and elevation (and probably pack weight), Michael struggled with the climb. We took a break and he started to do better. I think we’ll have to incorporate more breaks into our hiking until we’re acclimated. 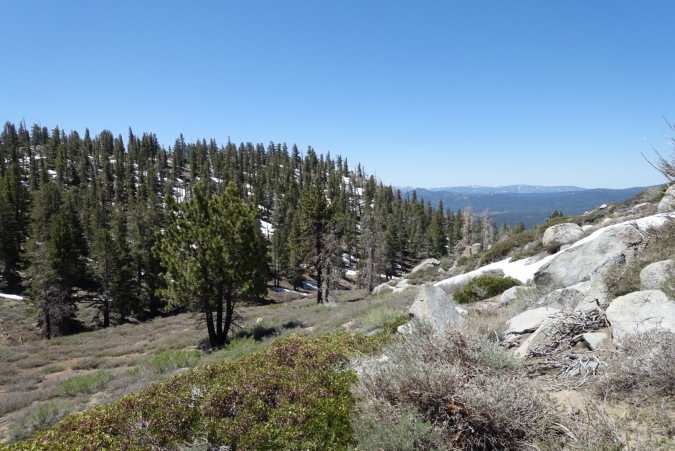 As we approached the top of the pass, we started to see more patches of snow. We stopped for lunch in a dry spot in the middle of a bunch of these patches and figured that this was probably as bad as it would get today. So wrong. 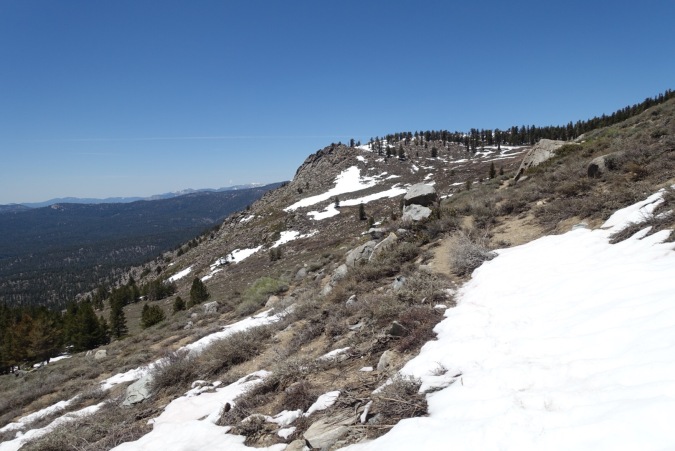 There ended up being quite a bit of snow cover, some of which required navigation to make sure that we were heading in the right direction. We even donned our microspikes to help give us additional traction (although the snow was already getting a little slushy). The next several miles (722-725) ended up taking much longer than we expected they would.

Snow on the way down… no trail in sight.

When we were finally free of the snow and down the mountain we were treated to the sight of Gomez Meadow, which was breathtaking. This is why I love hiking in the Sierras, around every turn is another view to die for! And we practically had it to ourselves. Other than the hiker that I leap frogged a couple times with in the morning, we saw no one until late afternoon when we ran across a couple southbound hikers. What a big change from Southern California!

The rock formations along the side of the trail this afternoon were intriguing.

Our afternoon snack: a burrito with chocolate hazelnut spread, Joe Joes (Oreos), and the crushed remnants of our cinnamon candied almonds. So good.

We opted to cut our planned mileage short for today and camp just before the next big climb. This places us 5 miles short of our goal, but the snow today really slowed us down and tires us out. Plus, the next 9 miles are said to be waterless, so this way we don’t have to carry extra water up to hill to dry camp.

When Michael first arrived at the camping area, he was basically warned off by another hiker. The guy (never seen him before) warned that he was part of a large group camped in the area and that they were planning to get up at 3am. We may be planning an early start, but not that early. We took the hint and back tacked a bit to another flat spot just back on the trail. I can still hear them from here laughing and shouting, so hopefully it won’t be too bad in the morning.

It was nice to be done hiking today by 5:30 and have a little time to relax around camp. That is, of course, until we were chased into our tent by a swarm of mosquitoes! They haven’t been very bad while we’re hiking, but they seem to attack as soon as we stop moving. Another incentive to hike on I guess!

We’ve heard conflicting reports about when the snow starts. Mile 735? 740? I guess we’ll find out tomorrow.

﻿Michael: sore back, blister above heel on right foot.