Getting out of town after two zero days is tough! Today’s remaining town chores consisted of an assortment of packing/cleaning remaining gear items and various online tasks. We still weren’t done when our noon checkout rolled around, so we just moved on over to the lobby.

Avocado from the hiker box!

Getting our bags to the lobby was an eye opener. Just stuffing everything in was a challenge and picking it up was another story entirely. My bag was so heavy loaded with 7 days of food and way too much water (~6 liters) that it felt like I was reenacting the scene from Wild where Cheryl Strayed can’t get her backpack on. It doesn’t help that hiking doesn’t exactly develop my upper body strength. I resolved to dump out some of that water! 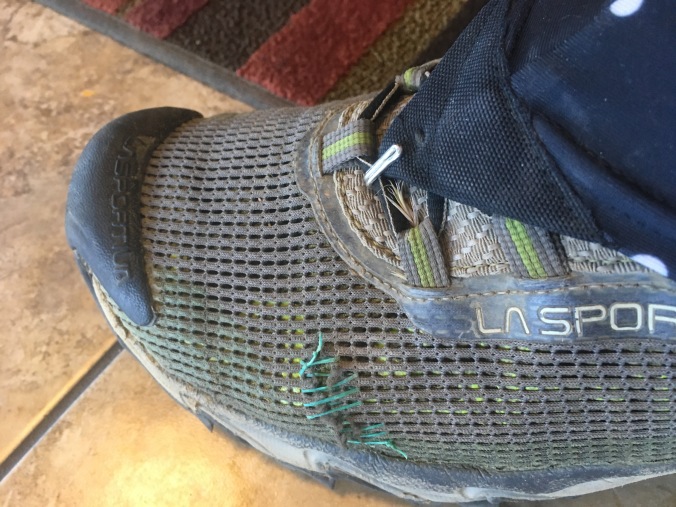 Michael used a needle and thread, er, dental floss, to repair his shoes.

We grabbed a late lunch at the bakery down the street (I enjoyed my pastrami and Michael loved the lox) and then headed back to the hotel to deal with a few last minute details. We’d tried contacting a few trail angels to set up a ride back to the trail before we were reminded that there’s a public bus that stops near the hotel and goes by the trailhead. Unfortunately, the bus times were either before we were ready to leave or a couple hours after we wanted to be gone. Hitching it is!

It took a while to get our first hitch, but finally a local stopped and gave us a ride to the freeway on ramp. Her young son may not have been super enthusiastic about sharing the backseat with us, but we were grateful to be dropped off at a better hitching spot. Within a few minutes, we had caught a ride the rest of the way. Our second hitch was with a young man stationed at the Air Force base nearby who was a hiking enthusiast. His backpacking stuff was already in the back seat and he was familiar with the area that we just hiked through.

We finally got to the trailhead at 5:45. Not exactly what we were hoping for, but at least we’d taken care of our town chores. We downed some water to “camel up” and then poured out some of our extra water into one of the empty bottles at the water cache at the trailhead.

My pack still felt incredibly heavy as we lumbered down the trail. The evening was sunny, but windy enough to keep it from being too hot. The trail starts by running parallel to the freeway. Multiple cars honked at us as they drove by (presumably in support).

Finally, we started heading uphill. What a struggle that was! We’d hoped to make it about six miles, but this plan was quickly nixed. I’d rather stop early today and get a good night’s sleep so that I can wake up early in the morning than hike late. Also, the wind was picking up.﻿

We lucked out and were able to find a spot that was hidden behind some trees/bushes away from the trail. Perfect for cowboy camping! You’ll have to trust me though, since I was horrible about taking pictures today. It seems pretty well protected from the wind that is howling above us — I’ll be wearing earplugs tonight for sure. Dinner was my leftover pastrami sandwich!

I was hoping that the wind would die down, but it only seems to be getting stronger. Fingers crossed for a good night’s sleep!