What a windy night! I’m not sure what time the wind finally stopped, but it did its best to keep us up. When our alarm went off at 4:30 we were still exhausted, but fear of the oncoming heat got us out of bed (after hitting the snooze button a couple times).

The morning started off with a big climb. It was already warm and the climb was one that seemed to take forever. I’d think I was at the top, but Guthooks would indicate that I had more climbing to go. I had been hoping that it would get cooler as we gain altitude, but no such luck. 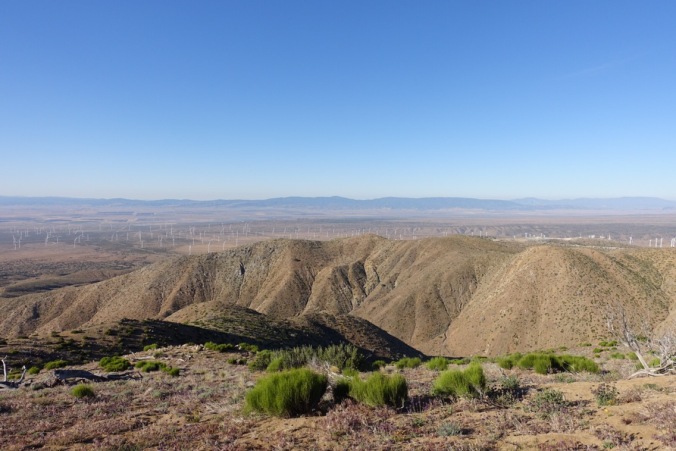 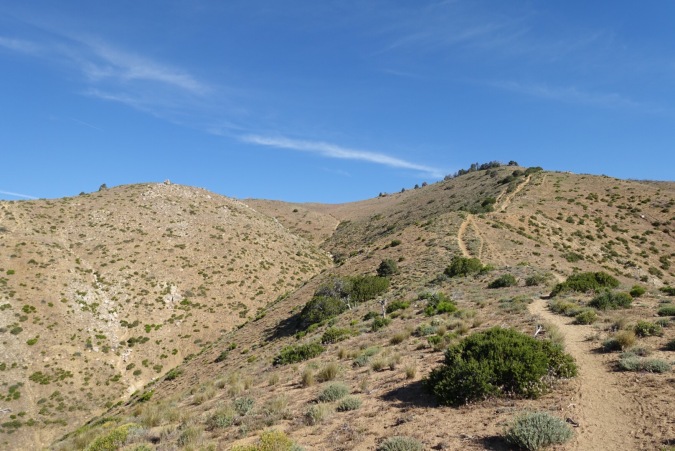 At the top of the climb there was a bit of trail magic — water and chairs! I downed a small bottle of water. We have no water sources until Tehachapi, so any bit of extra hydration helps to supplement the water I’m carrying. I sat around and chatted with some of the other hikers for a bit and the headed out when the sun got to be too much for me.

The trail wound its way back down through the hills. I imagine that at some previous time this walk was fairly pleasant, with lots of shade from the many trees. However, it’s now another burn zone. There’s lots of ground cover, but the trees are black and leafless. After a few miles I finally found a tree that wasn’t burned out that was just off trail. It provided the perfect cover for a quick lunch in the shade.

Despite the heat there would be no long siesta for us today. We still needed to put in the miles to get to Tehachapi (before our water ran out). There’s actually two separate roads that you can hitch into Tehachapi from: Willow Springs Rd and Highway 58 (eight miles later). We had opted to go the extra miles to Highway 58 to cut down on the water carry out of town when our packs will be loaded with 7 days of food. We’d just have to pay for that decision now. 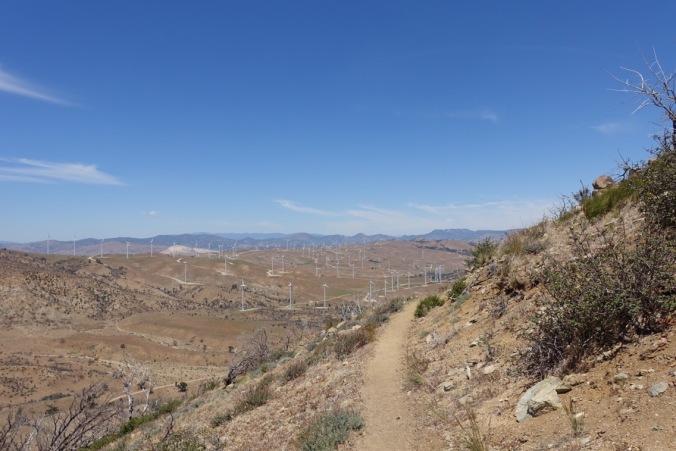 More wind mills in the distance

As we approached Willow Springs Rd, I thought a saw a tent/awning set up near the road. Trail magic? At this point, just some extra water would have been much appreciated. Especially if it was cold. My water was now warm (okay, hot) from the outside heat. Not ideal for hydration.

When we neared the road, the trail started to turn away from where the tent was. Darn. But then it turned back again. My excitement became greater and greater as we approached the road. I saw a van… with no tent. Had they packed up already? I walked further and could finally make out the top of a tent. A young woman approached to ask if I was a PCT hiker. Did I want a hot dog or a hamburger? Yes! Trail magic!

Hope, her daughter Jess, and Jess’s friend Jo had gone all out. Hot dogs, hamburgers, cold drinks, lots of extra water, chips, fresh fruit, and candy! Even the shade and chairs were a perfect respite from the day’s heat! I put my platypus of hot water in their cooler and enjoyed cold gaterade and a hot dog. It was perfect! And the most amazing part is that they were only doing this today! They’d planned the trail magic to coincide with Hope’s husband and son’s PCT hike, but her husband was now off trail and her son had fallen behind. But they still came out with their trail magic! It was such a boost being able to hydrate and get out of the heat for a bit before doing those final 8 miles.

Relaxing in the shade!

At 3:45 we left the comfort of the trail magic and its shade and headed back out. It was hot. Within a mile I could feel the sweat running down my face. We gradually climbed uphill through another wind farm. I knew I’d be grateful later for being done with this section now, but it was a good reminder of why we siesta in the heat.

Finally we neared the highway and began to hike downhill. There is a public bus that will stop at the trailhead and go into Tehachapi if you call ahead. I tried calling in to see if there was a bus coming soon, but it was going to get there before we could and the next one wouldn’t come for another couple hours. We’d have to try to hitch or call a trail angel for a ride.

This is where Cheryl Strayed (author of Wild) began her PCT journey. She skipped everything we walked!

We’d been playing leap frog all afternoon with Bushwack and he decided to call a trail angel. We had a ride! Of course, now with our ride secured we had two trail angels pull up and offer rides. It was 6pm and I guess hikers were headed back to the trail from town and the trail angels had empty accord returning. Since we had a ride coming, we gave our thanks and declined their offers. Soon enough, Natalie came and gave us a ride to town. She was so nice and helpful giving us a little tour of town before dropping us off. It’s amazing the help that we’ve been given today!

By the time we got to our hotel we were exhausted. We got into our room and stripped out of our dirty clothes to shower and get laundry started. We timed it right and the hotel washer was open. Michael went to start the load and only then did I realize that all the restaurants would be closed by the time our load was done. And we only had towels and jackets for clothes. Delivery it was!

By the time our pizza and salad had arrived and laundry was done we were beat. We’ve booked two nights so that we can zero tomorrow and we’ll need it. We’re both exhausted (especially Michael) and have a lot of research to do about the upcoming section in the Sierras.