What a peaceful night! I’d been concerned about going to Casa de Luna because of its party reputation, but I didn’t hear a thing up in the manzanita grove. They’ve got a great setup. 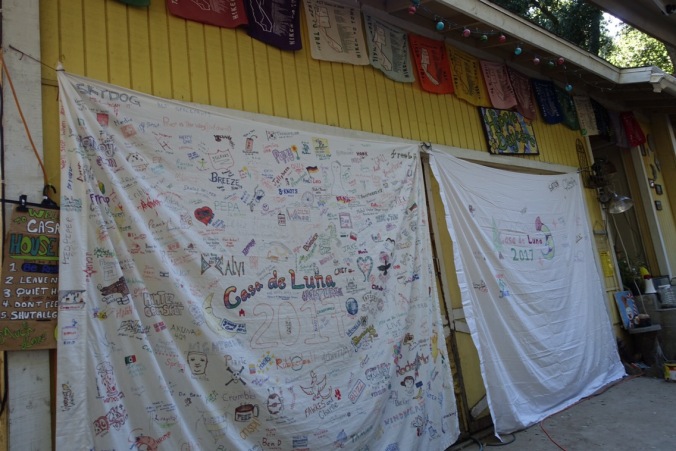 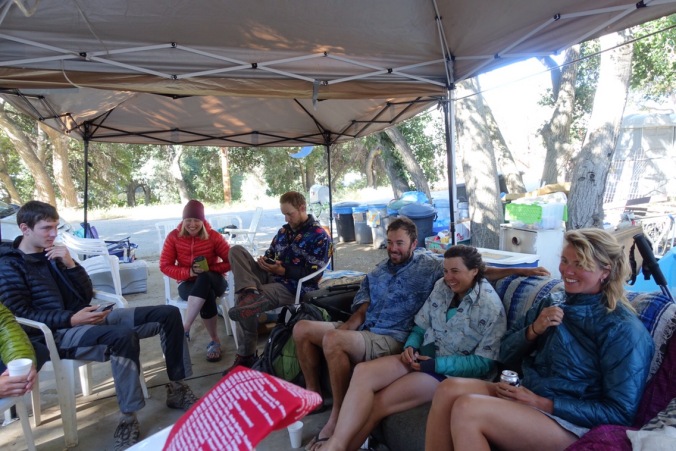 We were up and packed in time for morning pancakes. There was a bit of a line, but Joe has his pancake routine down flat. After breakfast, it was group picture time! Casa de Luna is known for their group pictures. Or more specifically, what happens behind the camera. Let’s just say that Terrie puts the “moon” into Casa de Luna!! 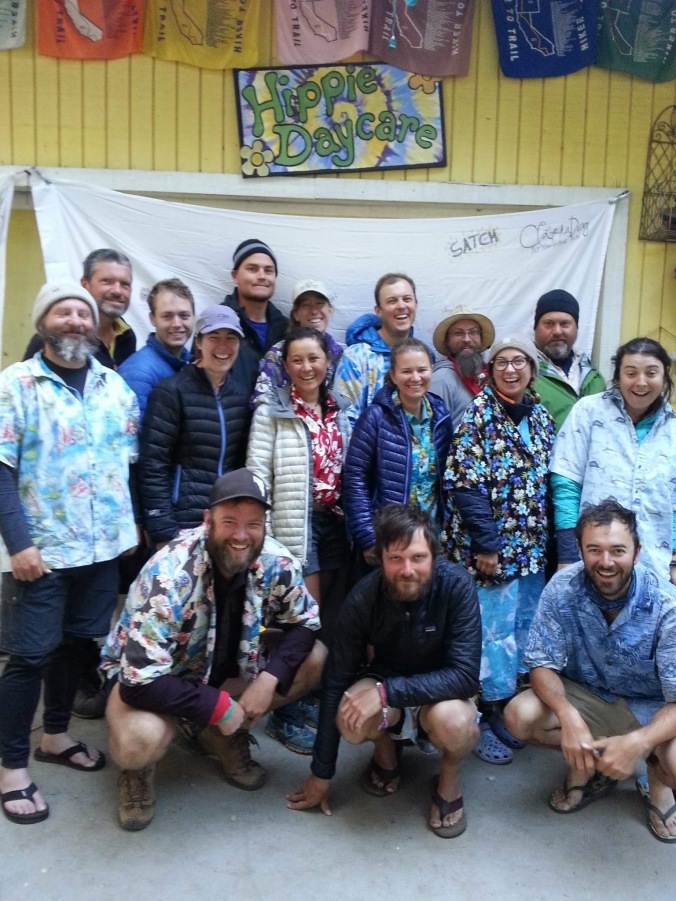 We took our time this morning leaving Casa de Luna. It was such a fun spot to hang out for a little while and is perfectly set up so that everyone can have a good time (and still get our beauty sleep). Two great trail angel experiences back to back! We’re being spoiled. Thank you to the Andersons! I’m glad we decided to stop by!!

We caught a ride back to the trail head with Little Step and finally made it back to the trail by 9:30. We had 20 miles to go before the camping area we had picked out (because it has water), so not the ideal start time. And of course, it was already warm and we started with a climb! 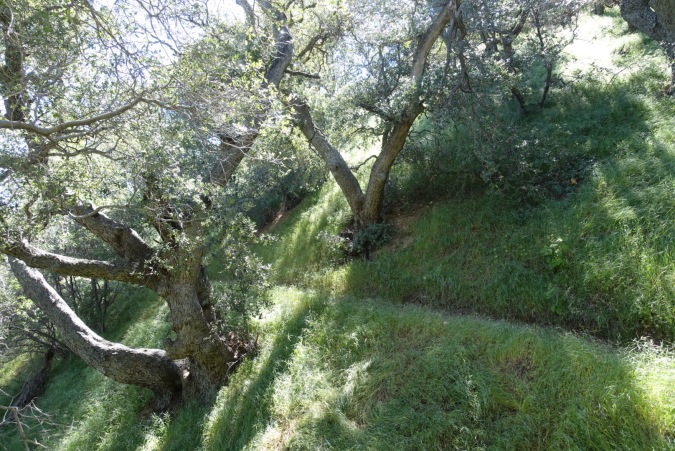 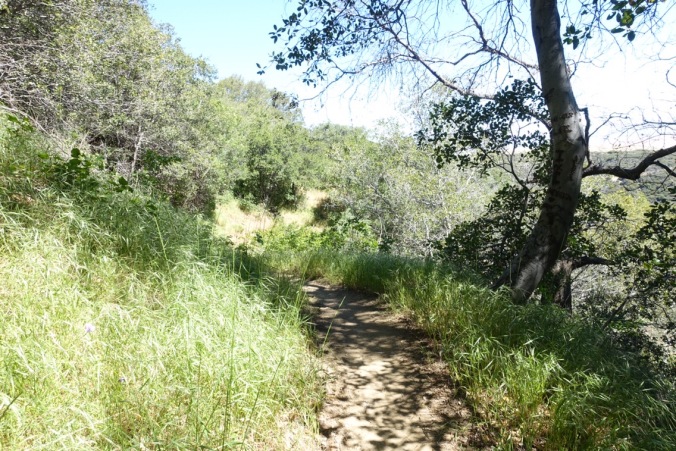 Up, up, up we went! We had moments of lush tree cover, but most of the morning was exposed walking. As usual, Michael and I split up for most of the morning with an agreement to meet at the first water source of the day. Lots of time on my own to think (and listen to my audio book). This was especially true today because I didn’t see a single hiker the whole morning! 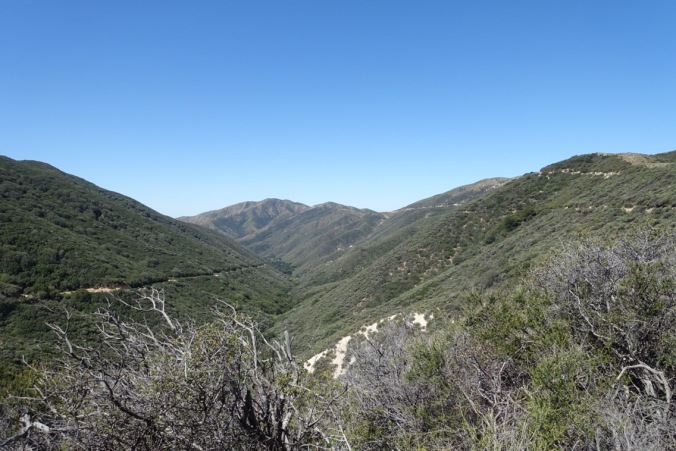 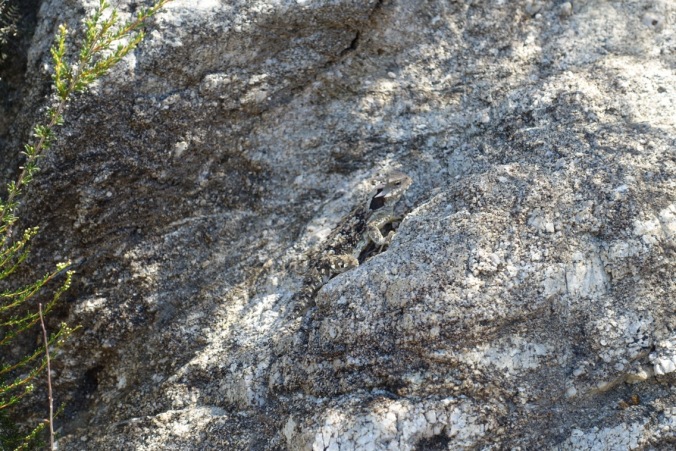 Can you make out my little friend? These guys typically run before I can catch a picture. 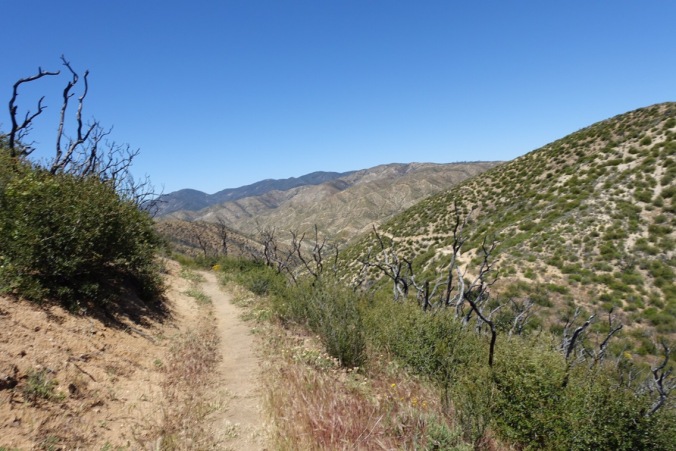 After the first climb, we headed down for a bit, and then it was time for more uphill. It was noticeably hotter today, which was made all the more evident by the exposed trail. 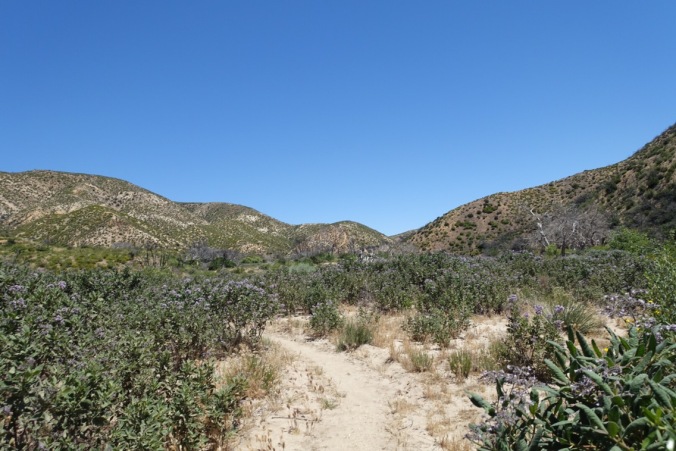 Our water source for the day was about 9 miles in. The water report described the source as a “seep.” It was basically a bunch of trickles along a bunch of roots hanging alongside the trail (unfortunately I forgot to take a photo). I had to stand there with an open gallon-sized ziplock bag for a few minutes in order to collect a liter, but at least the water seemed good! 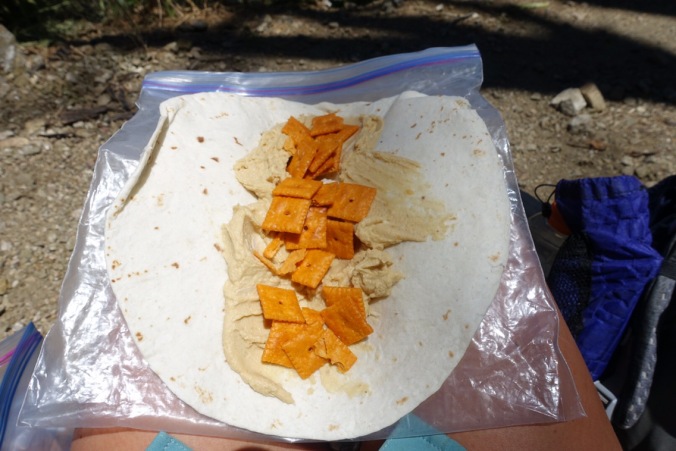 We ate our lunch alongside the trail in a patch of shade near the seep. Finally another hiker showed up — I guess we aren’t out here alone after all! 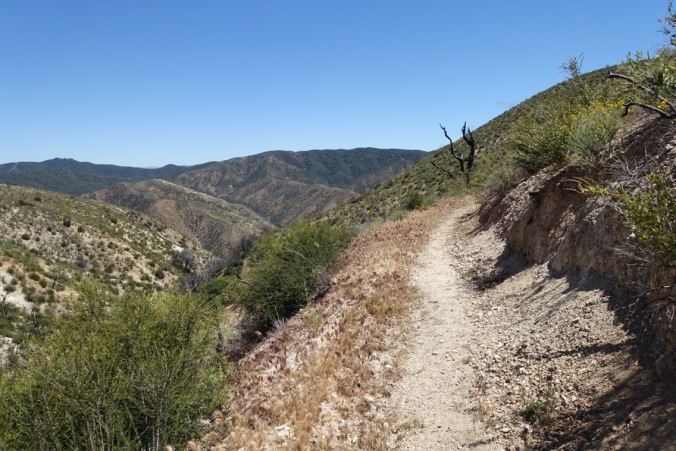 The rest of the afternoon was a steady climb through the hills with no water sources. I gradually began to see more hikers hiding in spots of shade, so it looks like our late start was probably partially to blame for this morning’s sense of isolation. 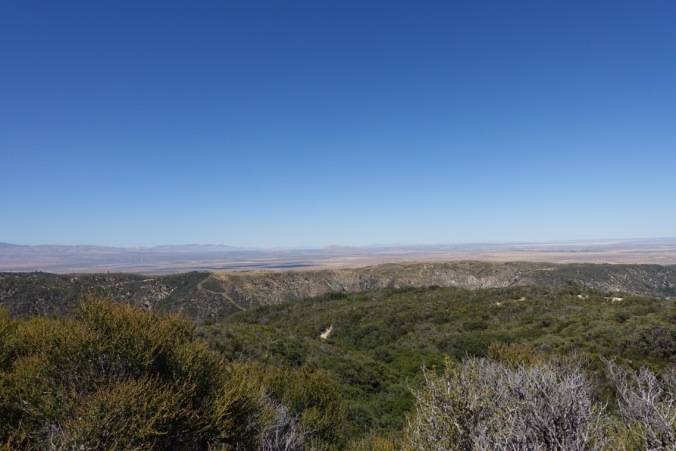 We got a bit of a view of the hot valley that we’ll be hiking in soon. 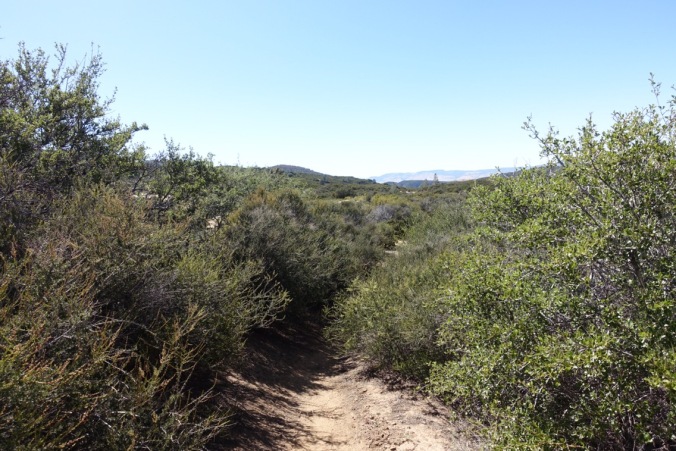 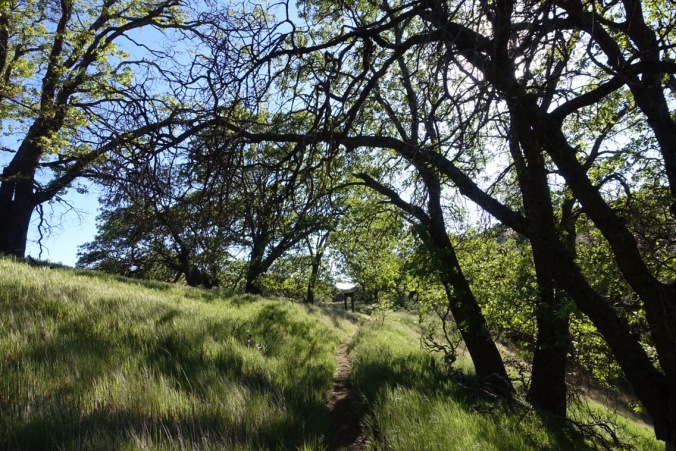 Our end point for today was the Sawmill campground, which was described as a “drive-in” camp ground about 1/3 mile off trail. There were dirt tracks around the camp ground, but only PCT hikers there for the night. I scouted out the area for flat sites (there were surprisingly few) while waiting for Michael to show up. I should have become suspicious when everyone I talked with asked if I’d already collected water yet. I hadn’t and didn’t think much of it.

Once Michael arrived, he worked on setting up camp while I went to get water from the guzzler nearby. It ended up being a huge pain in the ass. The hike up (yes, up) was about 1/3 mile and then there was the challenge of getting the water. 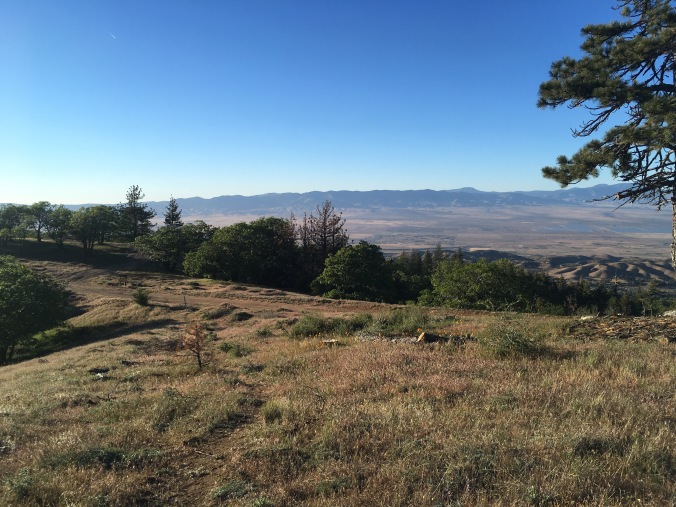 View on the way up to the guzzler. 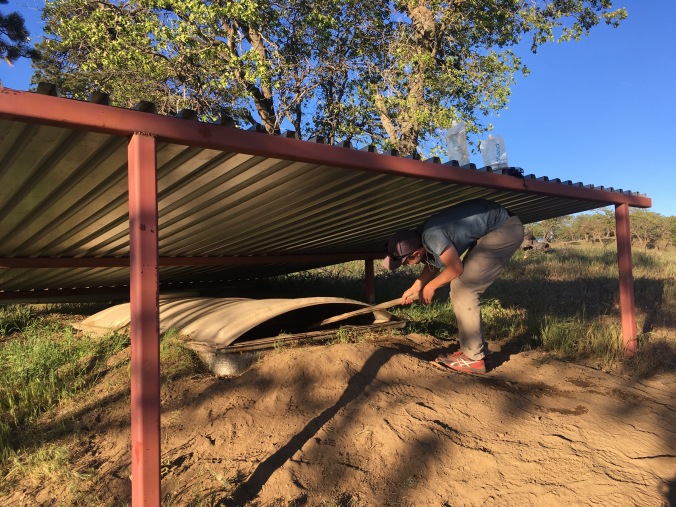 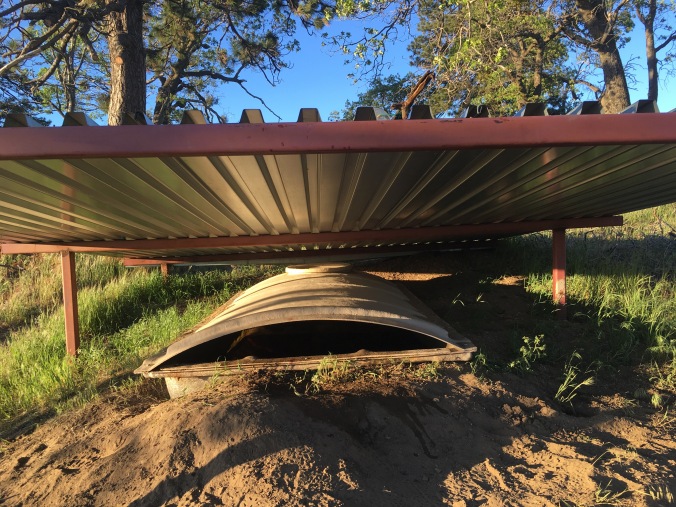 Guzzlers are designed to collect rain water and condensation. In order to protect the water they only have a small access area. In this case, the water level was low enough that you couldn’t physically reach the water without assistance. Instead, there was a “fishing” contraption of a Gatorade bottle on a string attached to a large stick. You stick the bottle through the opening and then try to move it back and forth to collect water (because it doesn’t exactly sink). There was plenty of water in there, but getting it into the bottle was another matter. It took a few tries to get the hang of it and I was able to collect and filter 3 liters (while watching a cute gopher nearby). It probably didn’t help that I was tired and a little cranky by this time. At least the water was nice and clear!

By the time I got back to camp, we’d already lost our remaining sunlight and it started to get chilly. We enjoyed eating dinner at a picnic table and then it was off to bed! 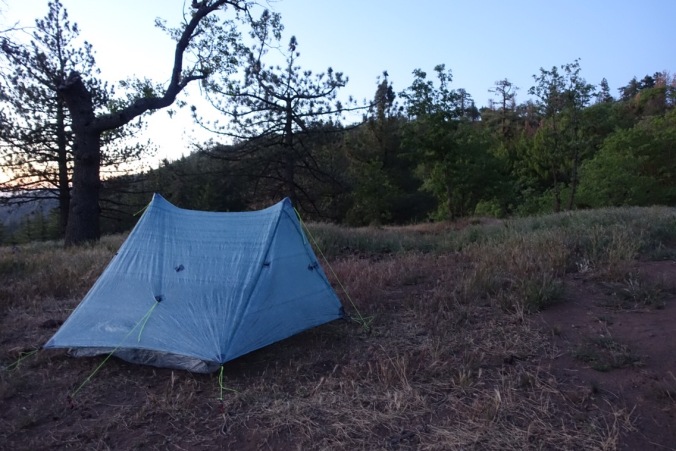 We’re coming up in the aqueduct soon — a section of the trail notorious for being hot and waterless. We’re not sure how we’ll attack it since we’re at an awkward spot mileage wise. It doesn’t help that it’s warming up over the next few days. Perfect timing!

Michael: none, but often fatigued.

Michael’s Note: I fell behind Elizabeth’s pace and was slowed further by a snake across the trail. I made noise (from a distance) but it took a while before the snake left. 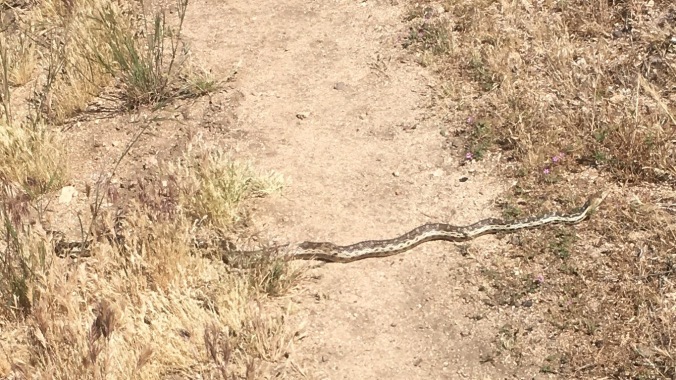