We were up early this morning so that we could get into (and out of) Hiker Heaven (home of trail angels the Saufleys) at a good time. 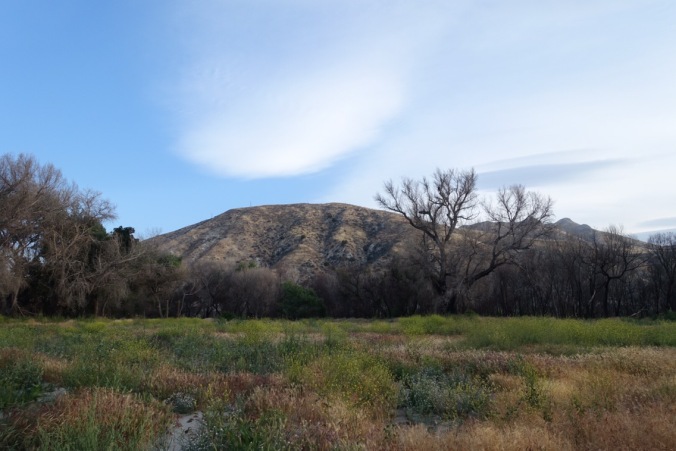 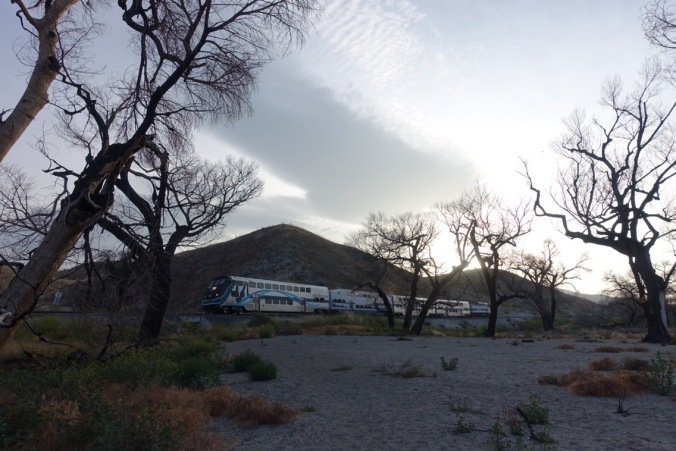 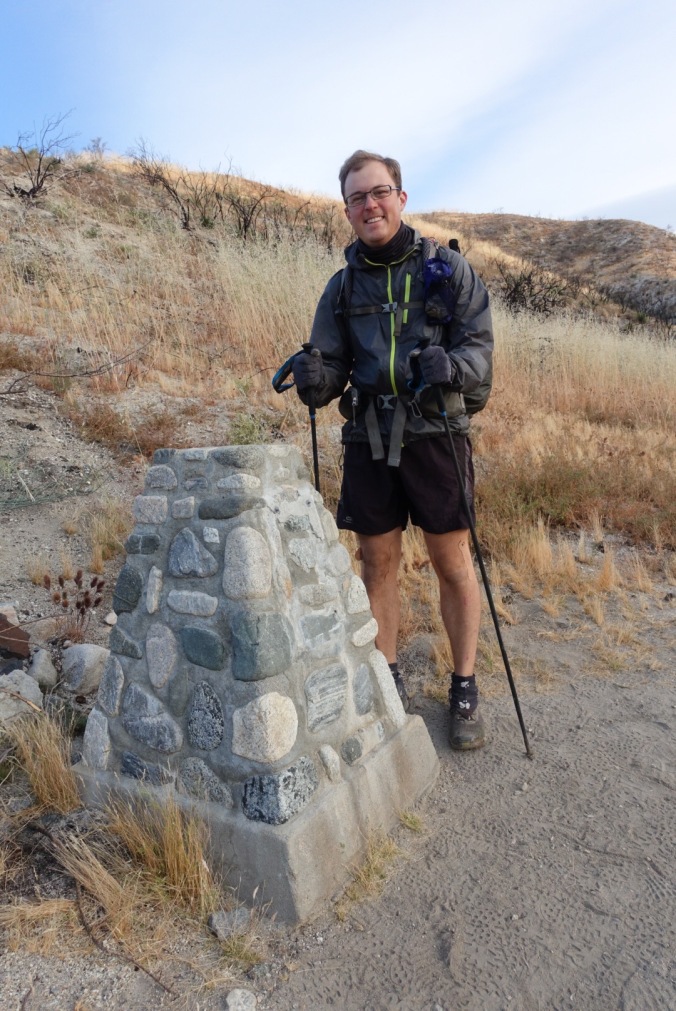 Monument for the last portion of the PCT to have been completed.

The day started out with a decent-sized climb up into the hills outside Acton. 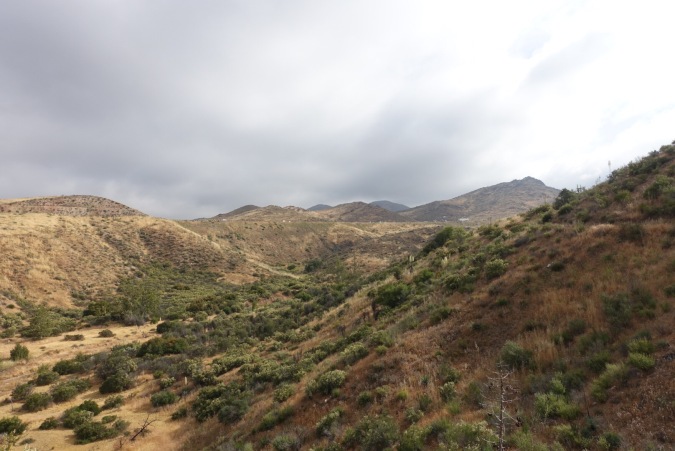 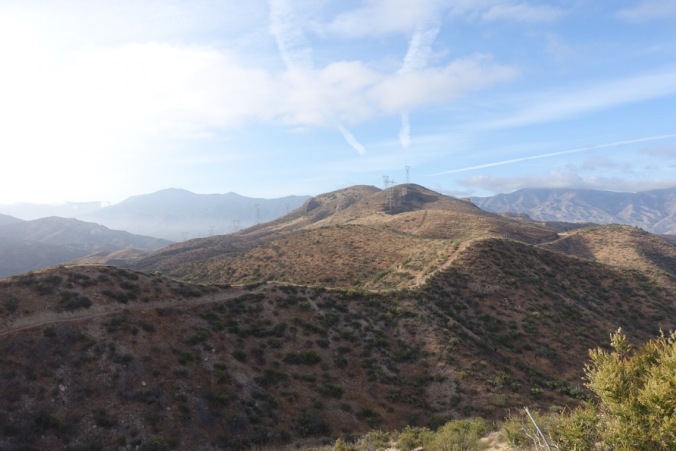 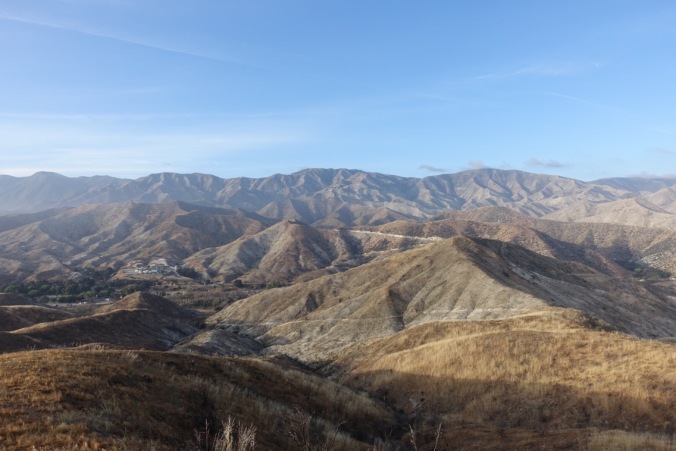 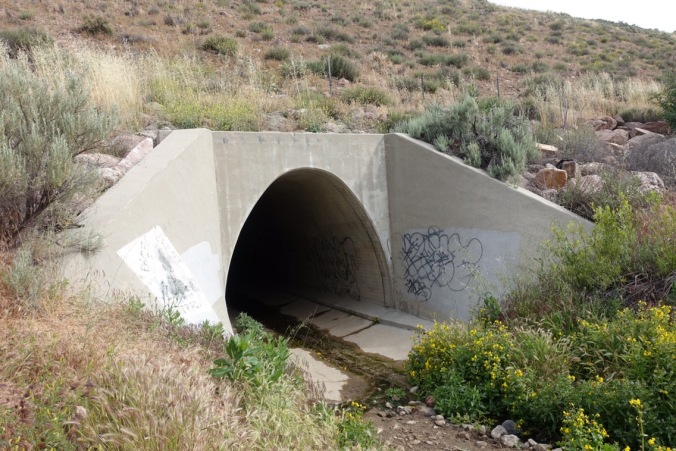 Not creepy at all… (camera makes it look a lot lighter than it was in person).

Out efforts were instantly rewarded when we entered the Vasquez Rocks County Park. It was amazing! Apparently the area has been used as a backdrop in a number of movies and TV shows, including Star Trek, for its other worldly appearance. For us, it was a nice change of scenery from the low desert brush and burned out trees that we’ve been seeing a lot of lately. We definitely took our time to admire the rock formations and informative signs identifying the native plants. 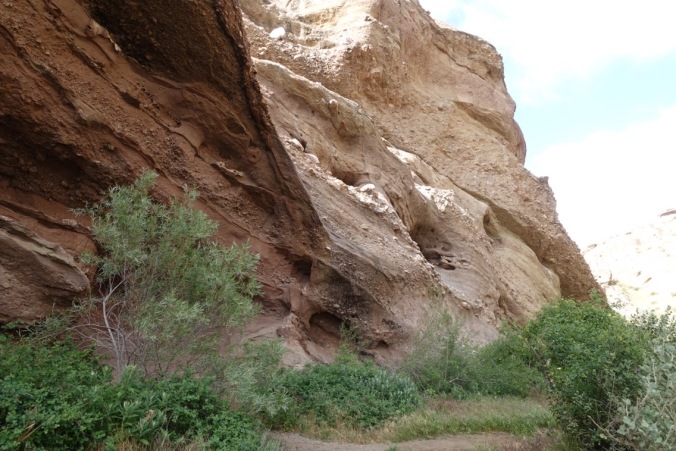 Umm, what is Mormon Tea? 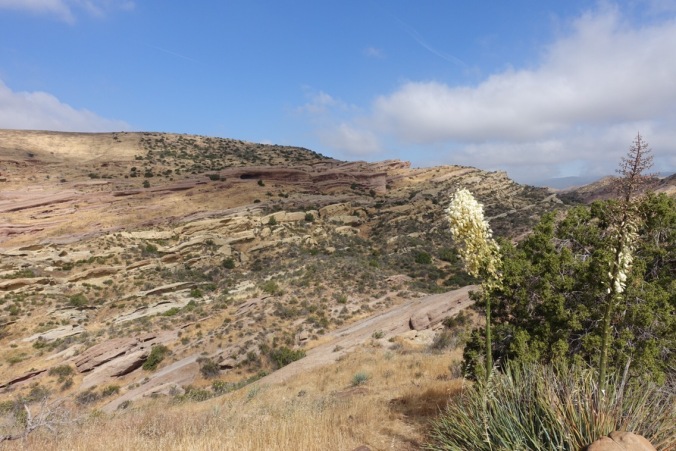 After exiting the park, we had a road walk into the town of Agua Dulce. While we’d normally try to get a hitch into town, this time the road walk was actually part of the PCT. The trail goes right through town (which is only a couple blocks long to begin with). 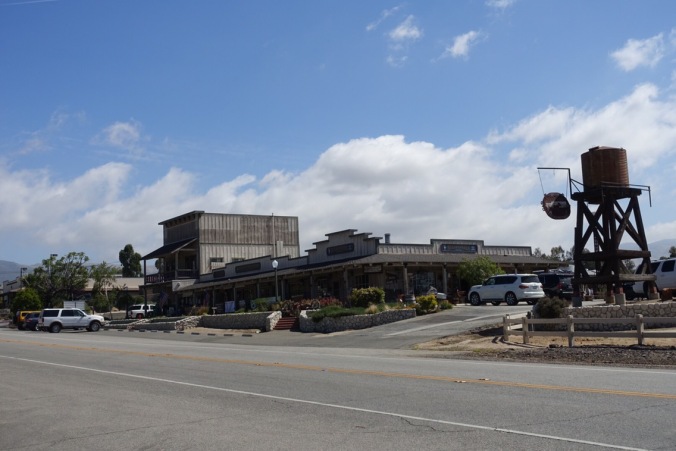 We’d planned to go directly to pick up our package at Hiker Heaven, but once we got to town we decided that a real breakfast was in order. We’d technically already eaten “breakfast,” but we were both still hungry (and our food bags are empty) and couldn’t resist the thought of a real breakfast. We stopped in at the Sweetwater Grill for omelettes, hash browns, and toast. It hit the spot!

Hiker Heaven is a little over a mile from the PCT and we lucked out and were able to catch a hitch with one of the Saufley’s neighbors. When we arrived, we were given a tour of the operation by Tartan, who is volunteering here for a few weeks. It’s impressive how many hikers they are able to help out and how organized everything is. There are stations for laundry (which they do for you) and lots of loaner clothes, a computer tent, sewing and repairs tent, lots of hiker boxes, and a huge mailing center in the garage. There were also a ton of tents already set up and a could trailers/RVs where a few couples could sleep.

As we were finishing our tour we ran into Gabs again, who gushed about how great the place was. We still weren’t sure if we should stay the night. It would mean another short day of hiking and we were itching to make some miles. Then Donna Saufley came up, welcomed us, and asked if we are a couple. When we told her that we are, she told us that we could sleep in the RV tonight. That settled it in my mind — we were staying the night!

The RV set up ended up being great because not only was there a bed, but also a couch and chairs to relax on when I wanted a bit of quiet time. We put our names down on the shower list (it took a few hours, but the shower was fabulous and worth the wait) added our laundry to the line-up, and set to work organizing our resupply. It was clear that we would need more food, so Michael headed back to town to get more food (and beer).

Much of the conversation at Hiker Heaven is about how to deal with the upcoming Sierra section. Late in the afternoon, a guy showed up who had recently been up in the Crabtree Meadows/Forrester Pass area. He was treated to a fairly sizable audience that gave him their rapt attention. Let the fear mongering begin. 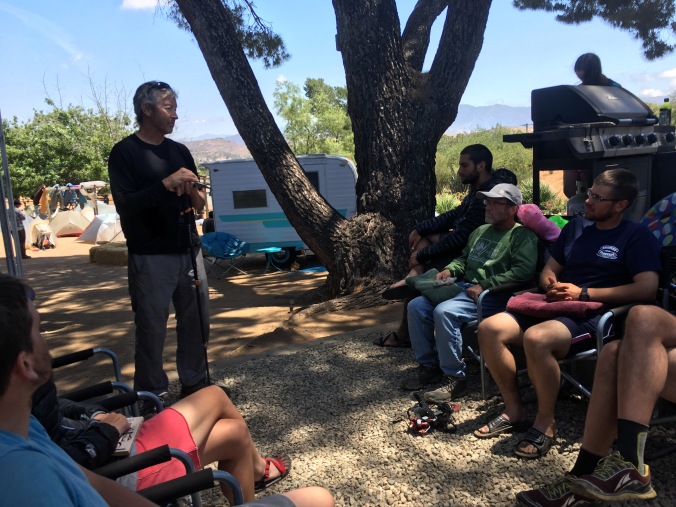 I appreciate that he took the time to talk with us, and what he had to say was informative, but I suspect that conditions will change greatly in the next few weeks as we make our way into the mountains. It sounded like his experience was that it was very cold and so the thaw hadn’t started (which I doubt will be the case by the time we’re there). He used boots and crampons, which we are hoping to do without. Some of what he had to say was helpful, but some I think was overly idealistic (like always trying to do a dry crossing at creeks, which I suspect will be much harder to find dry routes once the thaw starts). It did reinforce my suspicion that we should probably pick up an extra layer (as learned during our San Jacinto snow and recent hail/rain experience) and pack extra food. It seems like very few people have gone through the Sierras thus far, so the information was appreciated, but I think that ultimately we’ll need to experience it for ourselves in order to truly understand if it’s within our comfort zone.

We had thought that we’d be on our own to figure out dinner tonight, but instead we were treated to pizza from other hikers who had over-ordered (either purposely or accidentally). I’ll take it!

The biggest pizza I have ever seen.

Despite our low mileage day, I’m exhausted. Looks like we’ll be taking advantage of the RV to get an early night’s sleep as others stay up (like the group singing along to someone’s guitar). Between the noise, huge number of people staying here tonight, and the wind, I’m so grateful to be sleeping inside tonight!