We woke up this morning to find that it still felt like we were in the middle of a storm. Fog wrapped around Mike’s Place and the wind continued to howl. The edges of the deck were wet with precipitation. I knew that staying in my warm sleeping bag any longer wasn’t going to change the fact that it was going to be cold as soon as I emerged.

While there was talk of a warm breakfast, we aren’t really that hungry yet and wanted to get hiking. Unfortunately, my plan to cover the bottom of the sleeping bags in our trash compactor bags (which we use to line our packs) backfired. I thought that they would keep our sleeping bags dry from the thick fog, but instead they simply created their own condensation and the bottom of our bags were wet. We packed up the wet bags with the hope that we could dry them out later on the day. 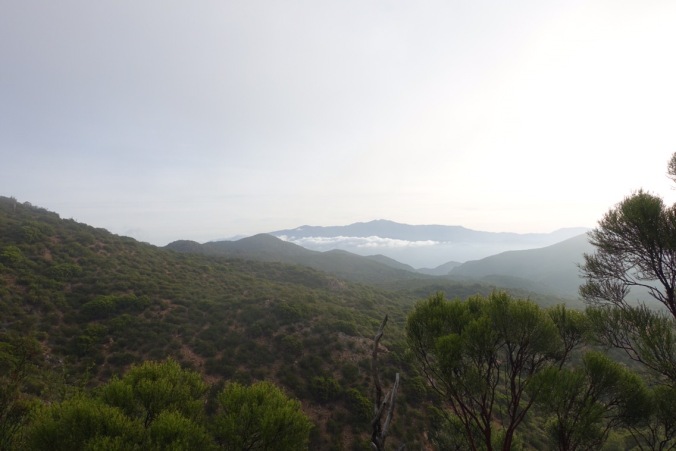 It finally cleared up as we hiked above the clouds.

Our first hour or so of walking continued to be cold and blustery.  It wasn’t until we dropped a bit in elevation that we got some sunlight (but still lots of wind).  Most of the morning we found ourselves following a single set of footprints and only seeing a single hiker going in the opposite direction. We finally met the hiker when we had to go approximately 1/3 mile off trail in order to get to a water source.  We saw the footprints heading downhill, but not coming back up.  I think we were more excited to meet the guy filtering his water than he was to see us (especially when we demanded to see the bottom of his shoes), but he didn’t bolt immediately so we must not have been that weird… 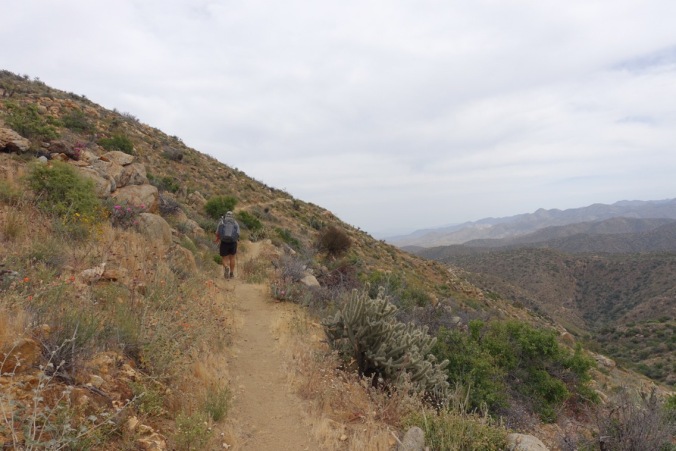 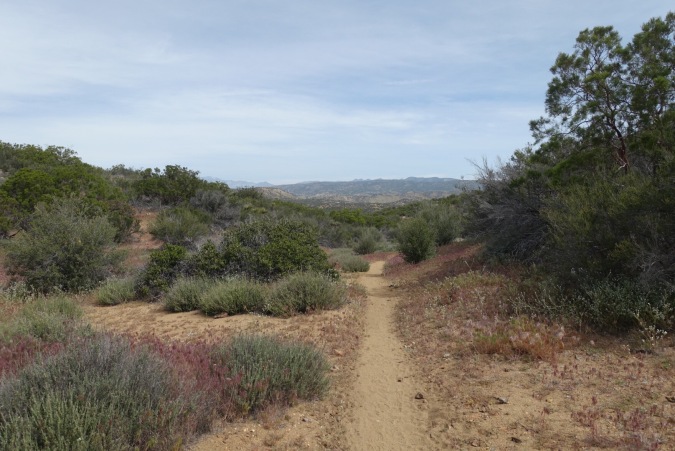 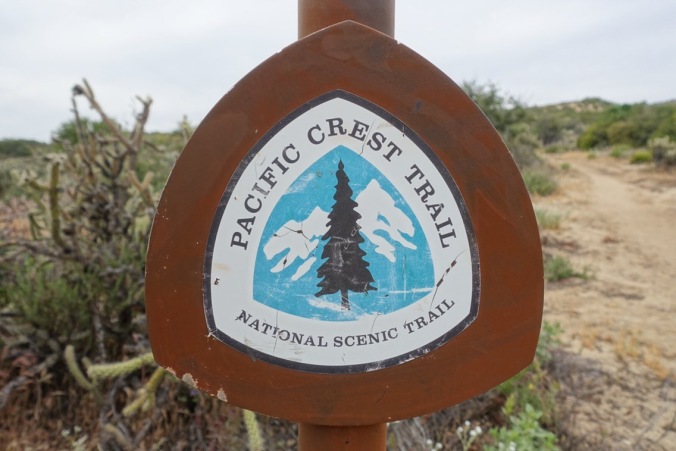 Today’s walk was very much defined by water sources.  We filled up from the water tank at Mike’s Place (~mile 127) at the start of the day, then walked off trail to find water at mile 137 (Tule Spring & Fire Tank).  With our early start, the miles seemed to go by relatively quickly.  My glute was even cooperating today!  We twisted our way through the hills, with scenery very similar to yesterday’s.  The wind kept the day feeling cool.  So much so that we cut our lunchtime siesta short because we were actually cold!  How things change over a couple days. 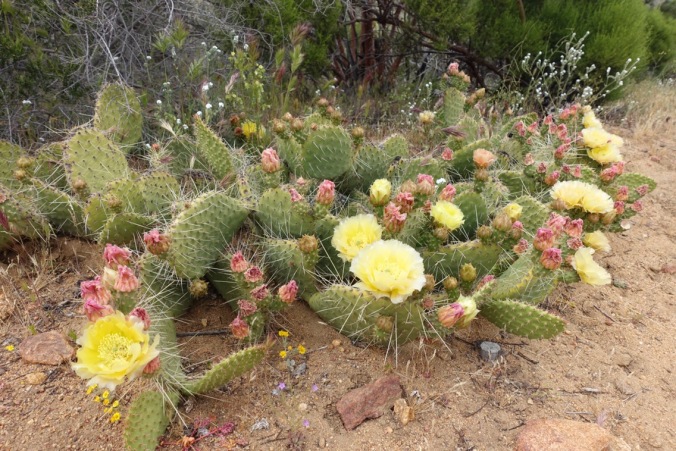 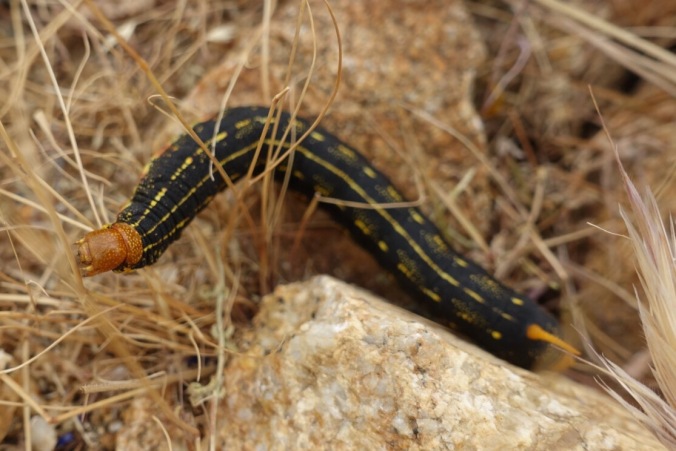 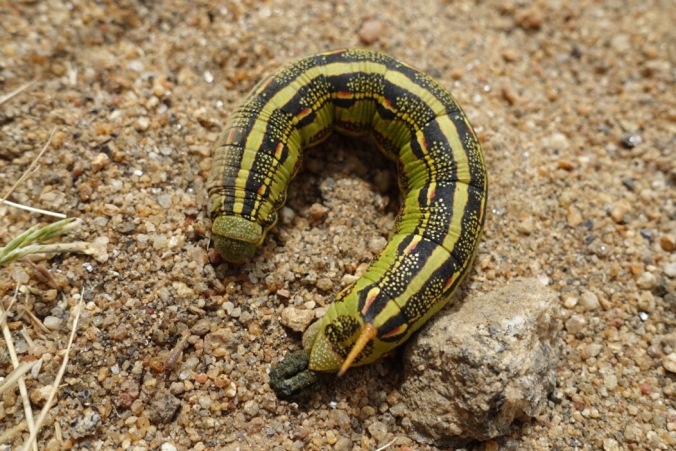 At mile 145, we came upon Walden in the desert.  No, not the pond in Massachusetts, but an amazing water cache along the PCT.  In addition to a large tank of water hidden behind a grouping of trees, there were two picnic benches (luxury!), a small bookshelf with free books, and a couple life-size cardboard cutout models of David Thoreau and Walt Whitman.  Apparently the water cache is there every year, but this year there is a literary theme to celebrate the bicentennial of the publication of Thoreau’s Walden. 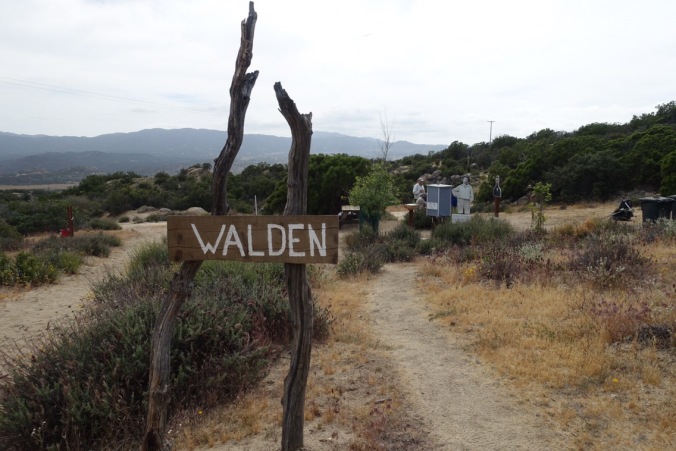 Even though it wasn’t yet 4pm, we opted to stop for the night at Walden.  It doesn’t hurt that there are picnic tables and a water tank here, but our primary motivation to stay is that we want to stop at the Paradise Valley Cafe tomorrow morning for breakfast.  It’s about six miles down trail and doesn’t open until 8am, so there isn’t much of a payoff to walk further today.  Of course, we weren’t the only ones with the same thought, so it looks like there will be a full house at Walden tonight! 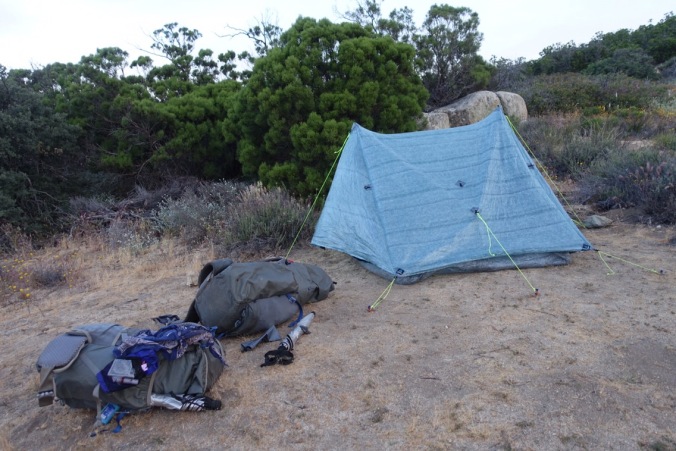 Although we’ve been on trail for a full 8 days now, today was our first day where we didn’t walk through a town (or campground with toilets and running water).  It’s made for a very different experience from our prior backpacking trips, but has definitely helped to ease our transition on the trail (and keep our socks cleaner).