Done with diving, we flew to Bali for a final week with Elizabeth’s parents. For family travel, Bali is a pretty good choice. Transportation is affordable, attractions are relatively close together, and the food is good and not strange.

Of course, we had to get there first. Our booked flight itinerary went to Bali via Makkassar (on Sulawesi Island). That flight had some engine trouble so they took us all off of the plane after boarding. After a couple hours of hurry up and wait, we were rushed onto a flight going to Jakarta on a different airline and without a ticket. Jakarta was slightly better — although the rebooking counter was surprised that a dozen white people trying to go to Bali had been rerouted, we eventually all received hand-written boarding passes and, after chaotic last-minute gate changes, we were seated together. I think the Jakarta Airport is permanent SNAFU, but they make it work every day.

The trick to flying and rerouting in Indonesia is to think of it as Soviet-style. You can’t do anything to arrange your travel or fix any problems — you just show up and do what you are told.

Bali, on the other hand, is what you make it. We settled in Ubud, the so-called “cultural capital” of Bali, where we originally planned to stay for four days before moving on for more scuba.

For two of these days, we booked private transport — a driver, Nyoman (“n” is silent), and his van — to get to sights beyond town. Our first day with him was a typical loop to main sights on our part of the island, including the Pura Gunung Kawi temple, Pura Tirta Empul temple with a natural spring and baths for washing, the Gunung Batur volcano, a stop at a coffee plantation/tasting room, Goa Gajah “Elephant Cave,” and beautiful rice terraces. The trip was a steal — costing IDR 500,000 ($37) plus tip for the day. 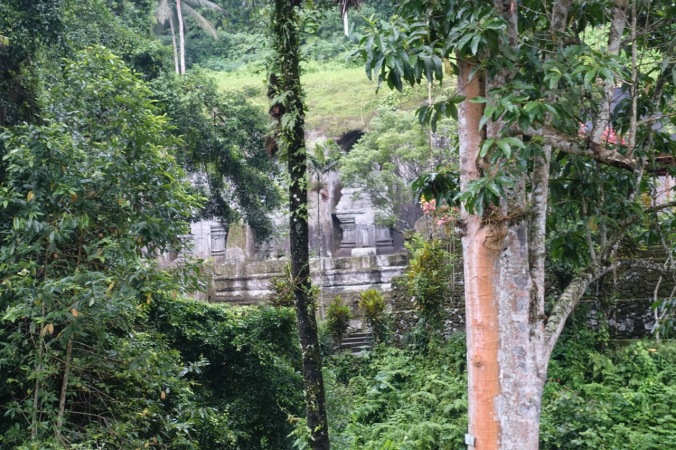 First we walked down about 250 stairs to Pura Gunung Kawi Temple, carved into the hillside.

Pura Gunung Kawi up close. Because we opted to start our day early, we had the entire temple complex to ourselves. We didn’t see a single tourist!

Rice terraces and waterway on the walk to Pura Gunung Kawi. 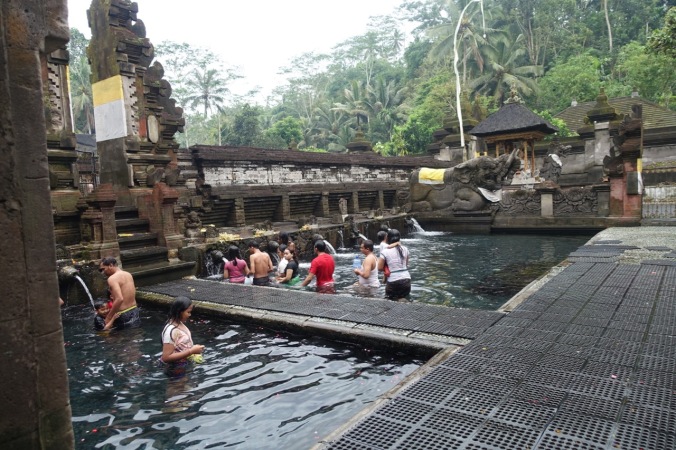 People washing in the spring water at Pura Tirta Empul Temple. This spring has a special religious significance and was not for casual bathing, so we stood by and watched from the sidelines. 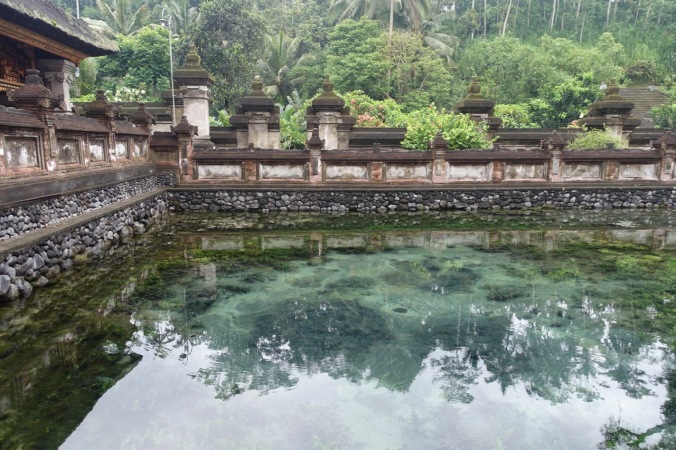 The spring itself at Pura Tirta Empul.

Gunung Batur: volcano rising in the middle of the crater. We could spot steam rising in a few places.

Jim roasting coffee. This wasn’t a stop we asked for, but it’s included on the itinerary and the place wasn’t pushy so it was a nice spot to try out some (maybe authentic) kopi luwak. 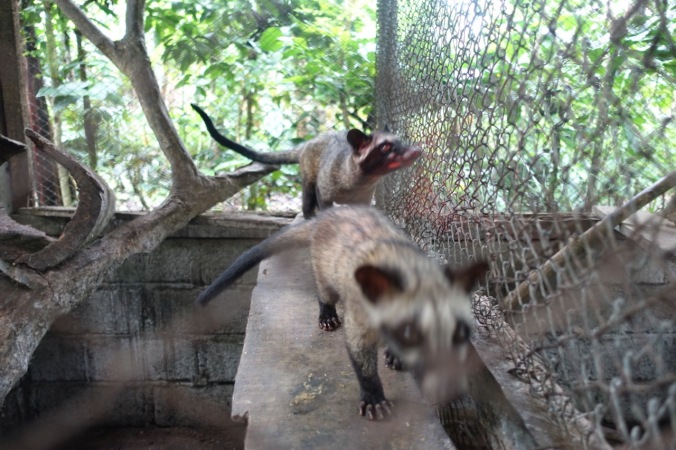 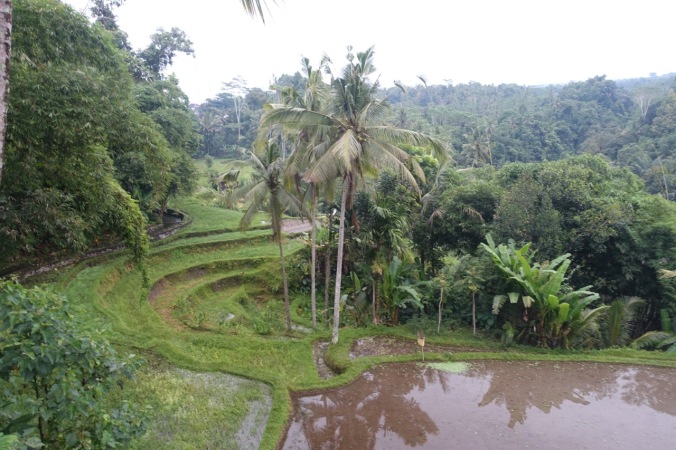 Amazing rice terraces. Many were in the process of being replanted, but you can imagine what it would look like with each terrace being a lush green. These rice terraces are definitely on the tourist track and were full of people walking around. We couldn’t help ourselves and did the sweaty hike up and down the terraces — Jim and Priscilla did really well on the muddy, slippery tracks. 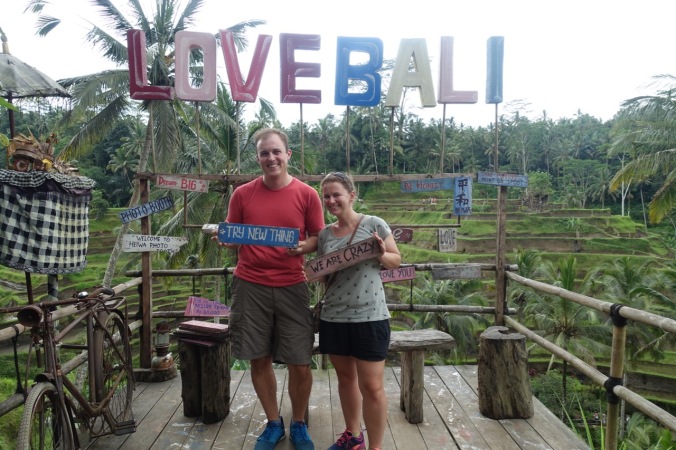 At the rice terraces, they had a photo point with wooden signs that say things like “I Love Bali,” “100% Love,” and the like. Of course we held up the signs that say “Try New Thing” and “We are Crazy.” Totally worth the ~ 25 cents!

Goa Gajah — the “Elephant Cave.” Foreigners can’t actually enter the cave because it is an active religious site, so we made due with viewing it from the outside. Again, so many steps to get there!

When Nyoman heard that my mom was interested in wood carving and batik, he added a couple additional stops to the end of the day. It ended up making for a long day, but was a really sweet gesture.

Our outing worked so well for our group of four, that we did another day further afield, stopping at the picturesque Pura Ulun Danu Bratan temple, hiking down to the Git Git waterfall, reaching the north shore for lunch, and stopping at Banjar hot springs on the way back. This trip had additional driving and therefore cost IDR 700,000 ($52) plus tip — still a steal. It would have been a good rate for two people, and we were four.

Temple on the lake: Pura Ulun Danu Bratan. Again we left a bit early to avoid the crowds and almost had this complex to ourselves.

We caught this procession to the temple as we were on our way out. 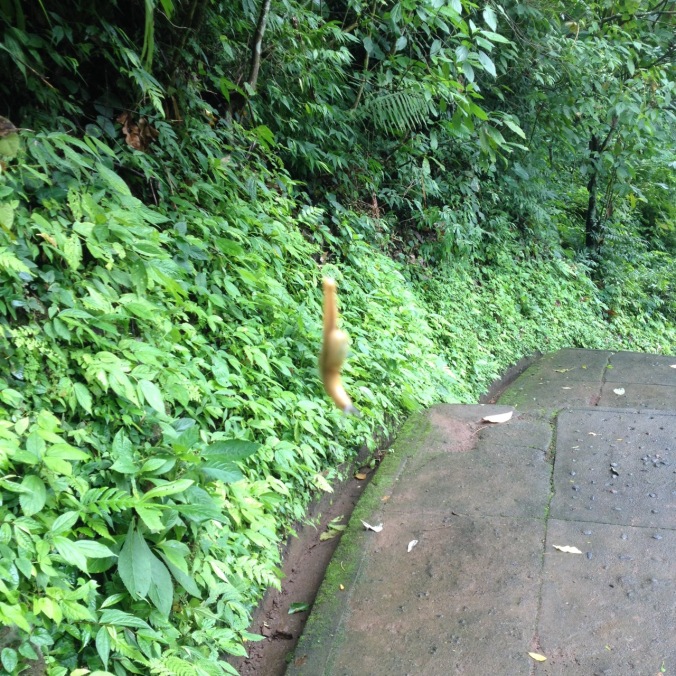 Slug hanging by its own thread on the walk to the Git Git Waterfall.

Banjar Hot Spring. We stopped to enjoy a swim here. Not the overwhelming sulfur smell that many hot spring have and well worth the stop.

Driving around with Nyoman ended up being a great decision. He was a conscientious and cautious driver, was always on time, and spoke fairly good English (thus doubling as a tour guide). If you find yourself in Ubud, give him a call (+62 81 797 840 25, wechat/line: Suyadnya 86, email: ikomang.suyadnya@yahoo.com).

We also explored Ubud itself on our own. The main sights, including the Ubud Palace and Pura Saraswati “Water Temple,” are in walking distance of most hotels, which is a good thing because getting a point-to-point taxi in Ubud is no easy (or cheap) feat. We braved the heat and rain to check out these temples and a few local galleries.

I think this was at the palace but I’m not sure.

We also checked out the aptly named Monkey Forest. It was full of monkeys…

Check out those teeth. This is why monkeys are scary.

For one of our evenings in Ubud, we attended a semi-outdoor dance performance. We haven’t really attended very many dance performances during our trip because getting out in the evening always ends up being a pain (or we keep postponing it, or there aren’t tickets available, etc.). This performance was in three acts: (1) an abbreviated Ramayana, (2) a dance by two children, and (3) a fire dance (meaning a guy kicked burning coconut husks). Priscilla found it enthralling. 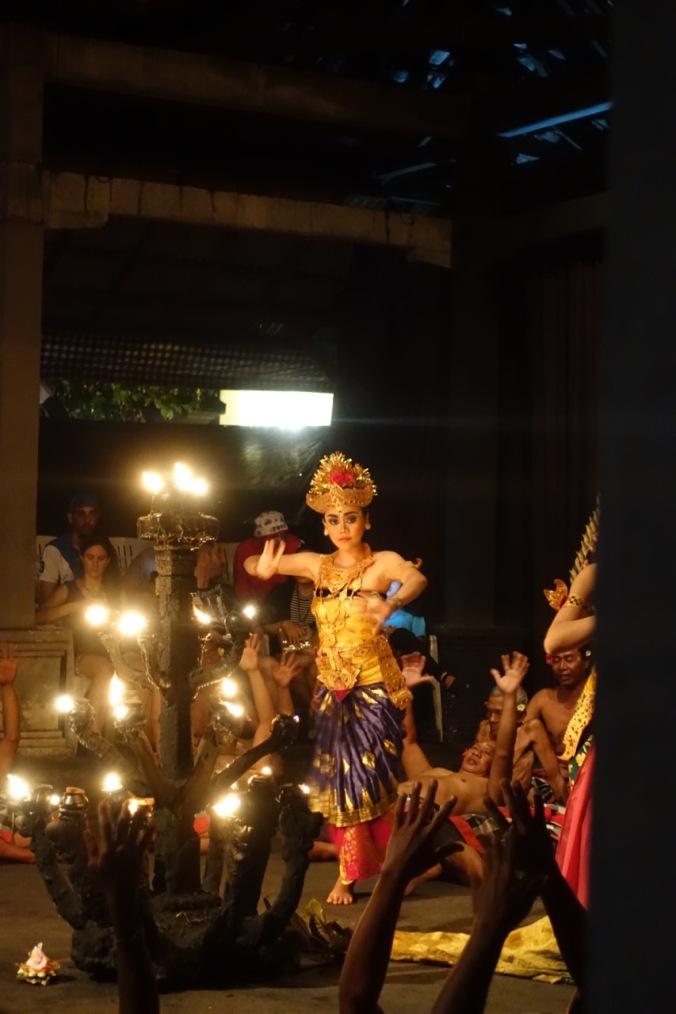 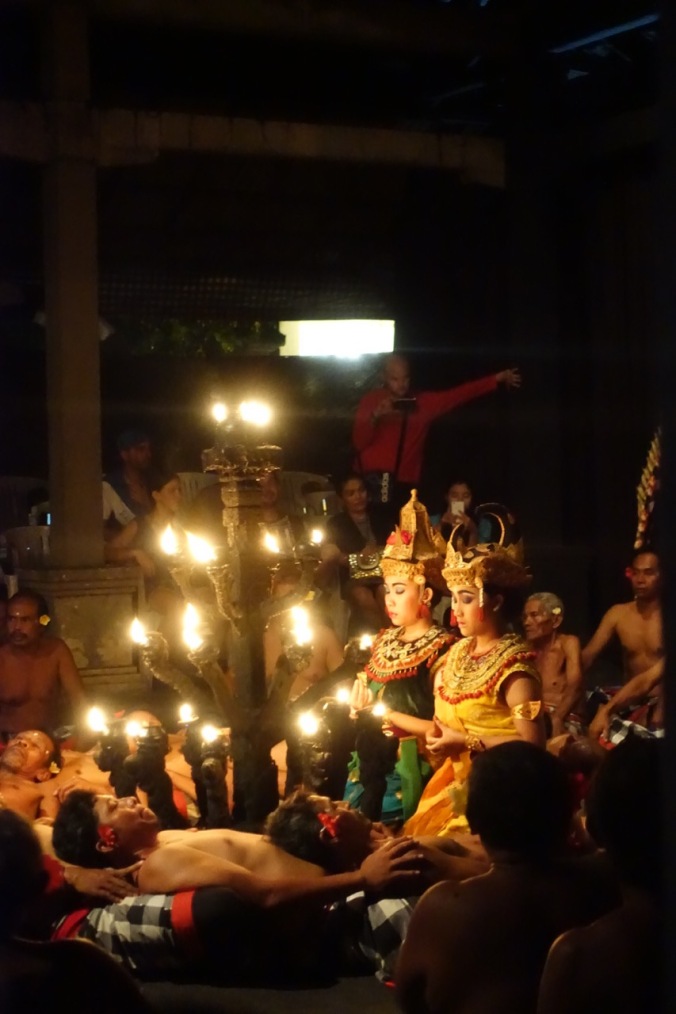 More Ramayana. We’ve been running into Ramayana stuff for a while, so I guess we had to see a performance eventually.

Kids dance in a routine. There performance was lengthly and surprising good considering how young they looked.

With everyone a bit diving and sights-fatigued and having gone to other parts of the island with our driver, we extended our stay in Ubud for the rest of our time in Indonesia.

Elizabeth and her mother did a batik-making course (batik is a fabric with color patterns resulting from wax). Her father and I went and ate burritos. A fair trade-off. Below are her pictures and explanation:

Elizabeth’s batik: First I started with the penciled pattern.

Then I outlined it in hot wax. 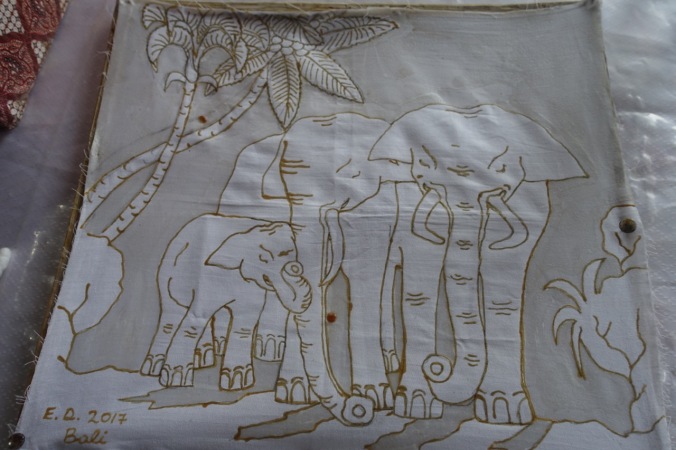 Then I filled in the void spaces with hot paraffin wax. 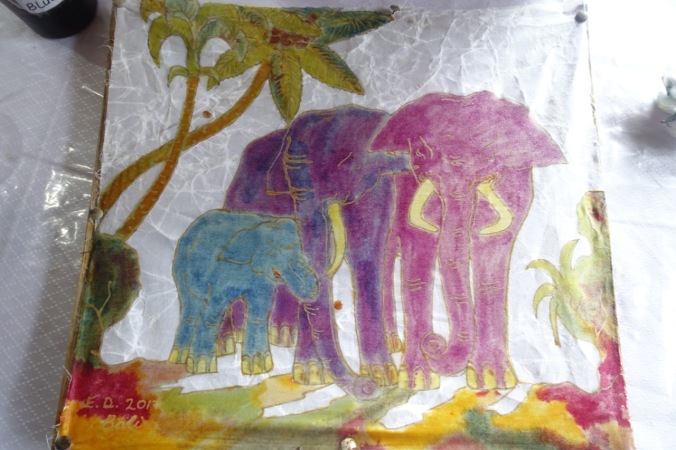 Painted it. This was not a straightforward process because there was no “red” or “blue” paint. Instead it was like a chemistry experiment using four bases and four top coats. Colors were made by applying a base and then the corresponding top coat. Wrong base = can’t get the color you wanted. In order to make some of the colors, you had to mix colors, which meant applying a base, top coat, a second base, and a second top coat. Apply the colors in the wrong order and you don’t get the color you want. It was a bit stressful… 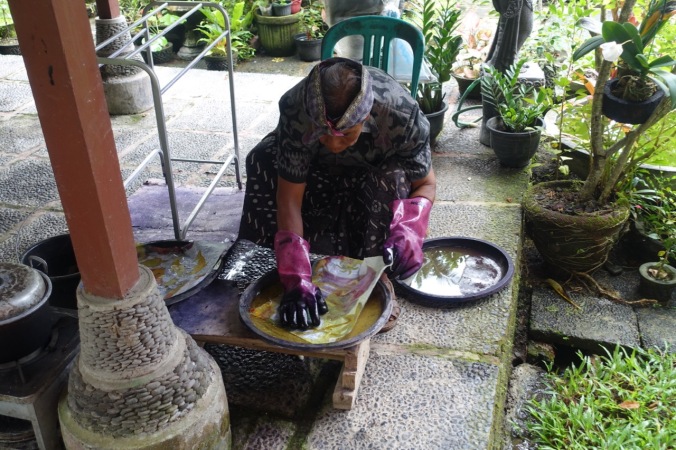 Then the instructor applied a final wash/dye.

Ta Da! Looks totally different than after it was simply painted!

The finished, dried product. Not bad for a first attempt.

Our splurge. A swatch of the large piece of batik that we purchased — to be transformed into a bedspread by Priscilla.

The food in Bali was similar to food in Java, but better. Satay Ayam (chicken skewers with peanut sauce) became a family favorite. And we could get varied levels of spice (more for us, less for our in-laws). 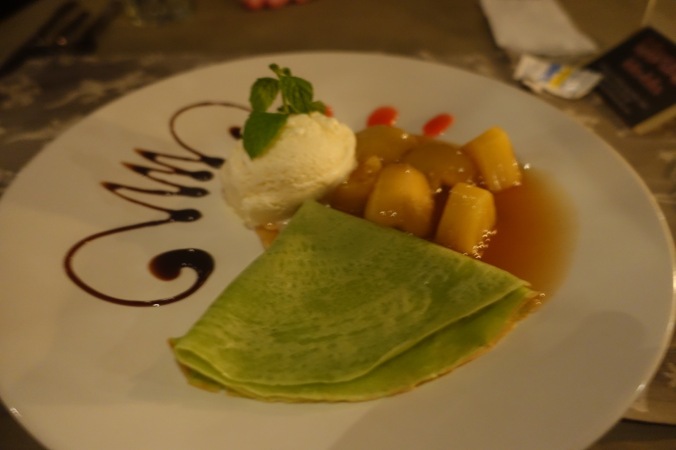 And we got to introduce Jim and Priscilla to the wonders of cat cafes (which are theoretically eating establishments, but who are we kidding):

This cat liked hanging out on the glass walkway.

Short-haired cat tried to nurse from long-haired cat. Long haired cat was not his mother, and not amused.

The weather wasn’t great during our time in Bali — it was either hot and muggy or raining, sometimes both. In a place with less tourist infrastructure, this could have been a disaster. But for Bali, it worked out ok. Accommodations ended up being nice and affordable (with our first place, Tebesaya Cottage being awesome) and we found plenty of rice terraces to keep Priscilla happy. All in all a great week in Bali with family.