After a two-hour bus ride from Mawlamyine, we arrived at our pre-booked* hotel in Hpa-an (pronounced pah-ahn, not hop-a-on) and inquired about tours  of the surrounding caves for the next day. We learned that an evening trip to a famous bat cave nearby was leaving in two minutes. Bat cave it was. The cave is known for the million-plus bats that fly out around sunset. We jumped into the back of the pick-up (actually more like a covered pick-up bed pulled  by a motorcycle), headed out to the caves, waited maybe 15 minutes, and watched in awe. The bats leave just late enough that it is tough to take good photos, so you’ll just have to trust us that it was amazing.

Streams of bats. This photo actually has two streams of bats. The big stream across the photo is bats leaving the cave (off camera to the right) and flying to the left. Under that on the left side, you can see the beginning of the stream that started a few minutes earlier, flow across the river, and is now headed toward the bridge.

We were basically standing just underneath and to the side of the cave entrance that the bats emerged from. As they started to stream out of the cave, you could actually smell the damp bat poop wafting out with them. It really as magical — they just kept coming. Apparently it takes them hours to all filter out of the cave. The experience seemed all the more special because there was practically no one there; just a dozen foreigners and hundreds of thousands of bats. Totally worth the 5,000 kyat each (~$4) for the shared truck. 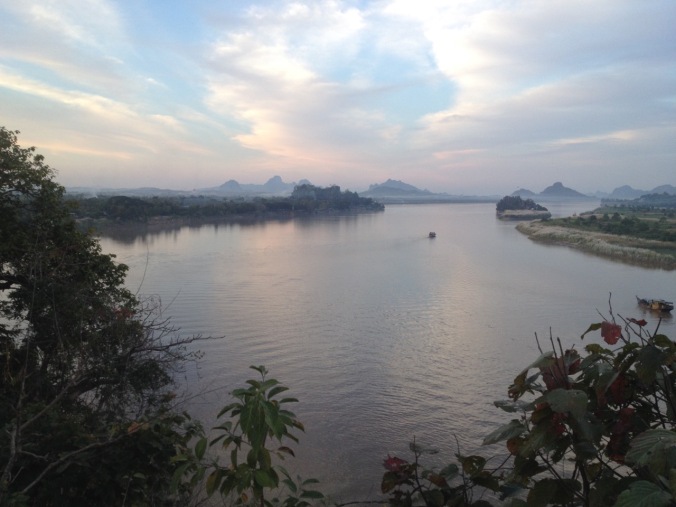 This is the view near the bat cave before the sun goes down. Not bad.

The next day we visited several caves during the day. They are now shrines with Buddhas in them, so once again we had to take off our shoes — even though we would be walking on rocks (and bat poo). 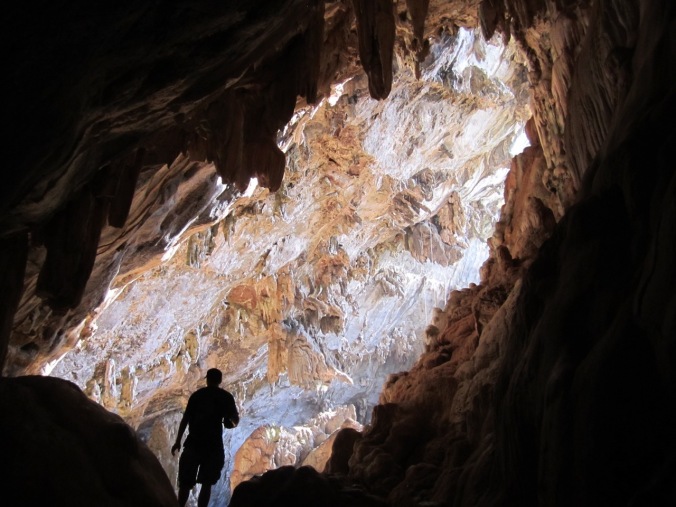 The last big cave ended with a beautiful boat ride in a shallow channel between rice paddies. It made for great pictures and made for an incredibly peaceful ride. 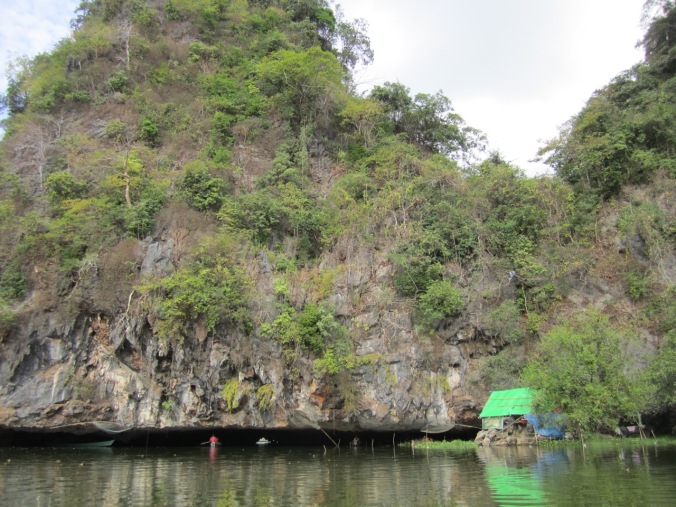 While it looked like we started in a closed lagoon, we soon learned that wasn’t quite the case.

Heading under the rocks. 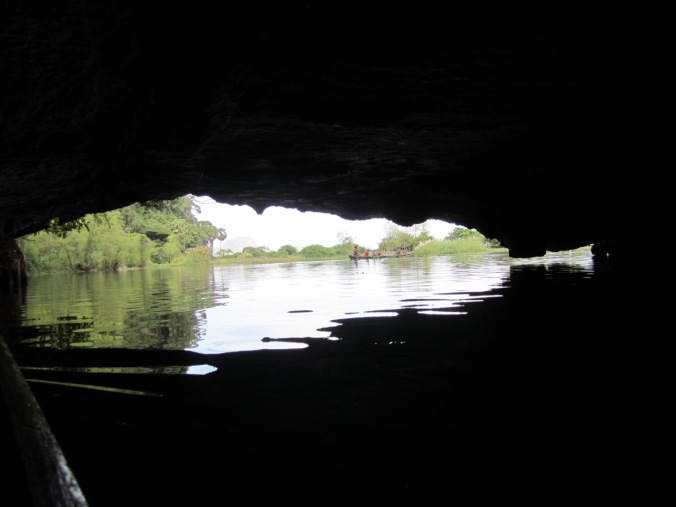 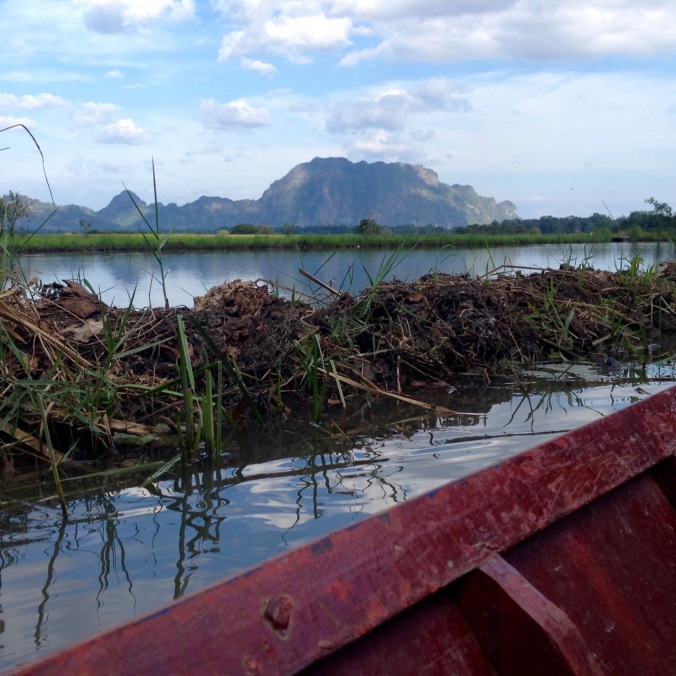 Our route ended with us quietly floating in a narrow channel with the cliffs/cave on one side and rice paddies on the other.

Our final day in Hpa-An we rented a motorbike. This was our first since Laos in 2010 (the ebikes in Bagan don’t count). I drove and didn’t crash. I’ll count that as a win. We went to a natural swimming “pool” fed by a spring and then explored the surrounding countryside.

The swimming pool. And people with selfie sticks… <sigh>. 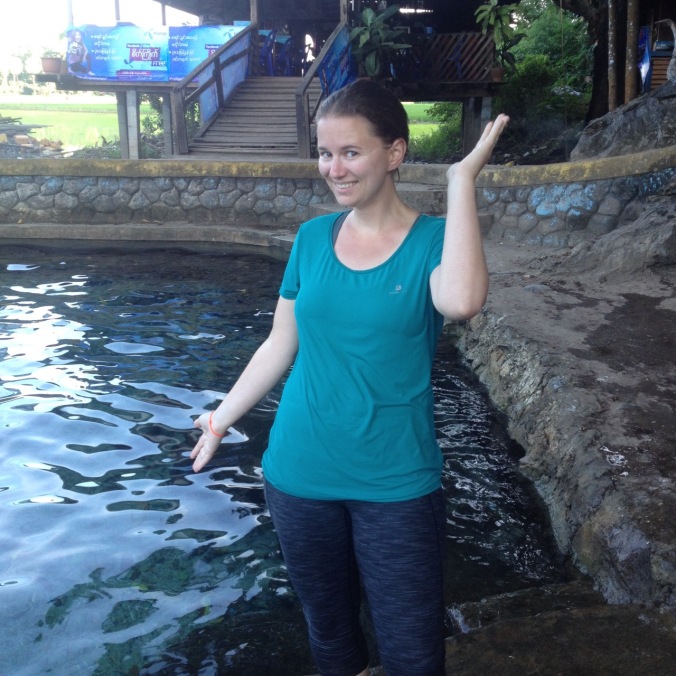 Myanmar modesty rules for women = no swimsuits, you must remain fully clothed.

We passed by this group of novice monks hanging out on top of a wall as we biked along some scenic backroads.

I drove a motorbike across that. Short video is on Instagram.

The next day we went back to Yangon. As with all transport in Myanmar, it took forever. The first bus broke down. The second bus stopped to get some contraband fuel. Then we arrived, had dinner, and went back to the Pansodan Gallery for the same gathering we went to when we first arrived in Myanmar. Once again, it was nice to chat and have beer (this time from a tap!).

We left Myanmar for Thailand the next morning. We loved Myanmar so much that we ended up overstaying our visa by two days, which wasn’t a problem at all. Travel in Myanmar was incredibly rewarding, but we also found it exhausting from both a physical travel and planning perspective. This could be a reflection of the fact that we’re seven months into our travels and in need of some downtime. The Thai islands were calling…