In my last account of train travel, we were stuck in Ulaanbaatar, Mongolia, trying to get a visa for China. We could fly from Mongolia to other destinations, but we wanted to finish the journey by train.

As Elizabeth explained, we managed to obtain Chinese visas.

Anyway, our desired train from UB to Beijing was the same train that we took from Ulan Ude to UB, but two weeks later. We knew that tickets would not become available until the day before it departs (and it departs at 7:30 a.m.). We figured this meant anytime the day before, so we went to the train station in the morning.  Unfortunately, that’s when we learned that the rule is that onward tickets from UB to Beijing are not sold until 6:00 p.m. the day before the train departs. I think this is because the train is subject to Russian jurisdiction until that time, after which the Russians give ticketing authority to Mongolia.  For travelers, it means leaving everything to the last minute.  Which is sort of right up our alley at this point.

So we went back a bit after 6:00pm. The cheap seats (beds) were “sold out” but there was a Chinese man claiming to have an insider’s connection with a train conductor who could get us cheap seats because he had a deal with the conductor. The man’s explanation was confusing and he was basically asking us to meet him the next morning at the train, at which time we would exchange cash (but maybe not a physical ticket?). He even showed another foreign traveler — an Israeli man — his WeChat messages. The Israeli, who couldn’t read it, responded “It’s all Chinese to me, literally!” We opted for more expensive seats rather than corruption and uncertainty. So did the Israelis, who we learned the next morning ended up in our compartment.

The morning of the ride it snowed. It made for nice views. The Israelis, plus a brief visit from a New Yorker and a pair of Italians, made for good company. I even ate dinner in the dining car — first time on the trip — where we shared a table with a couple from San Francisco and used up the last of my Mongolian currency.

Heading to Beijing on the Polar Express? Okay, not actually our train…

Snow-covered Mongolia out the train window.

Elizabeth in our compartment during our last ordinary stop in Mongolia.

Related Update: we also learned from fellow travelers that when the Russian exit agent asked about narcotics, musical instruments, and something we couldn’t understand in Russian (I called this the “Sex, Drugs, and Rock ‘n’ Roll” inspection) — it turns out that the “something we couldn’t understand” was pornography. So I was right.  Don’t try to export sex, drugs, or rock ‘n’ roll from Russia.

The highlight, in the middle of the night, is the carriage switching. After immigration processing (and an opportunity for less curious passengers or those who don’t want to be denied access to the toilet for four hours to go sit in the empty station) the train rolls into a warehouse. There, the cars are lifted a few meters into the air, the wheel carriages are rolled away, and new wheels for the tracks in China are added. The train ends up split on two tracks, with each carriage separated from the others, so you can watch the whole process on the cars across the way. It’s a bizarre experience and I recommend it to anyone who is confident that they won’t need to use a toilet for a few hours. 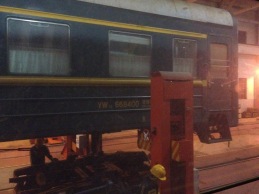 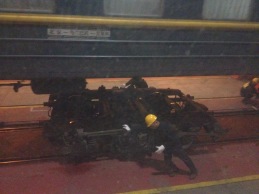 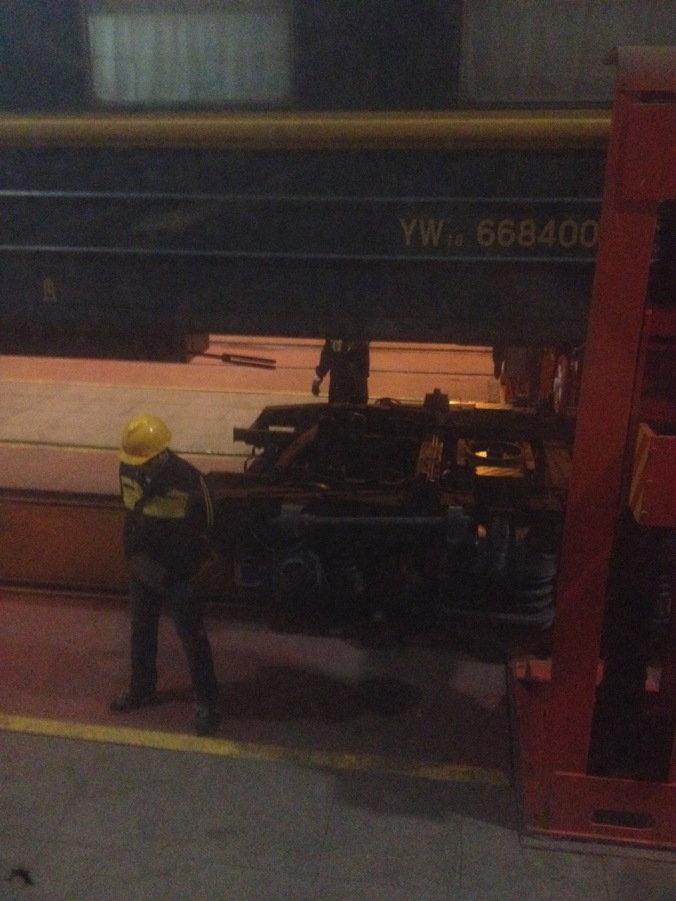 Train lifted off the ground (with a worker giving perspective). Please excuse the super dirty train windows that we had to take our pictures through.

All of this for 8.5 centimeters difference in gauge. 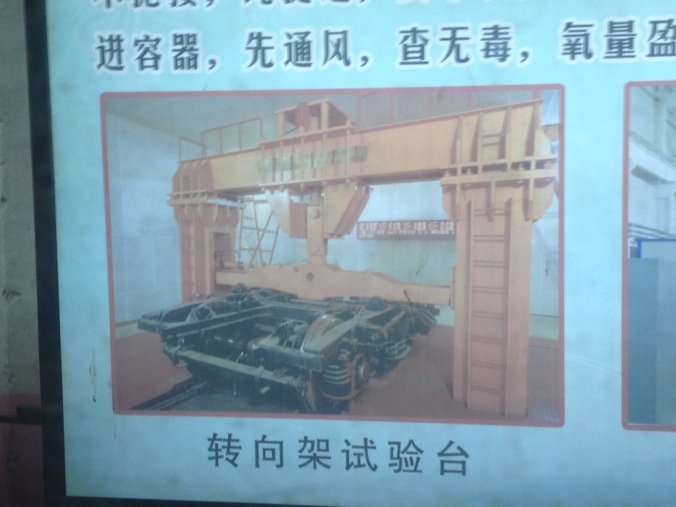 A sign visible outside of our train while in the warehouse.

Since you can’t use the train’s toilet when you are in the station, this was actually the second extended period in which we couldn’t use the toilet. We first stopped on the Mongolian side to go through exit formalities, which took about two hours (during which time we were stuck on the train due to the immigration process). As soon as they unlocked the toilet after the stop, we had to rush to use the bathroom during the 10 minutes or so that it was open before being locked again for stopping on the Chinese side of the border for four hours. Fun!

The wheel swap was finished at around 11pm, at which point we opted to sleep through the rest of the stop, intentionally skipping the free breakfast served from 6:00 to 6:20 a.m. Whose idea was that timing?

We went to our included “lunch” at 9:00 a.m., and found that the restaurant car was a totally different carriage from the evening before. I guess it was swapped out with a Chinese car when we crossed the border. Sadly, the food wasn’t as good as the Mongolian one. But I didn’t care much. It was exciting to arrive in Beijing, rolling through the futuristic South Station on the way to the old Beijing Railway Station.

Twenty nine days earlier we left Moscow on a train. Six stops, almost 9,000 kilometers, and two countries later, we exited the train and walked into central Beijing. Flights may be fast but it feels magical to walk out of a train station and into the center of a major world city without the hassle of airport connections, especially after leaving St. Petersburg about a month earlier.

That guy has no idea he is photobombing me.

[This post describes the end of our our journey on the Trans-Mongolian line of the Trans Siberian Railway on October 16 and 17, 2016.]

One thought on “Trans Siberian Railway Success: Arrival in Beijing”