by Michael (with substantial content written by Elizabeth — thanks!)

Our guidebook and various websites on the Trans-Siberian Railroad suggest that travelers visit some of the preserved old towns outside of Moscow. Since the towns are filled with glittering churches and because Russians are obsessed with all concepts ring- or circle-related, they have nicknamed these towns the “Golden Ring.” Looking for a taste of life outside of Russia’s main cities we heeded this advice, stopping off first in Vladimir (on the main train line) and then Suzdal (not on the train line) to see cute towns and old churches.

The train to Vladimir was easy enough; it was a bit less than two hours from Moscow, and after a bit of searching for luggage lockers at the Vladimir train station (we found none) we located an attended room with baggage storage in the basement. We opted to store our luggage after getting off our morning train to Vladimir so that we could visit Vladimir and surrounds before continuing on to Suzdal to spend the night.

Our first item of business was to catch a local bus out to the Church of the Intercession on the Nerl, a small church on a smaller hill in the middle of a floodplain near Bogolyubov (about 12km northeast of Vladimir). We were pleasantly surprised at how frequent the bus service for this rural route ran — we missed a bus and only had to wait about 10 minutes for the next bus (#152) to arrive.  The church is something of a pilgrimage site (I think) and we were greeted in the small town of Bogolyubov by a couple of nuns handing out hot tea and fried dough (perfect for a cold, drizzly day). 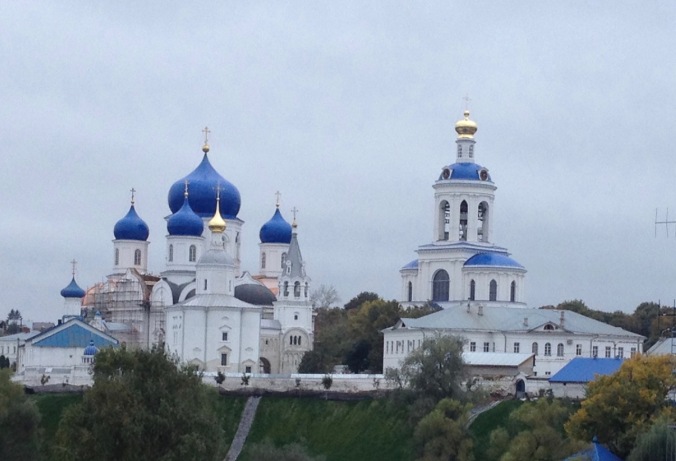 Monastery in the middle of Bogolyubov — this is where we ran into the tea-serving nuns.

The church was actually outside of the small town a bit and it was the first time we went walking through an open field to a church since the Camino (memories!). The sculpted figures on the outside of the church are pretty impressive and the overall atmosphere was very peaceful. It was worth the bus ride and walk, although if I were to visit again I wouldn’t necessarily worry about opening ours as the interior of the church is rather plain. 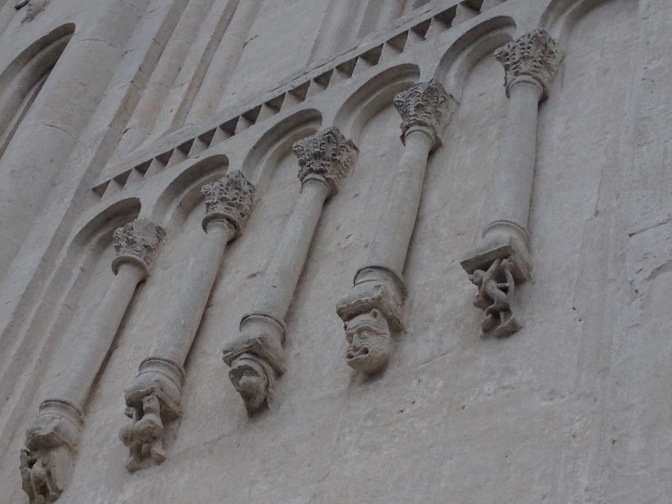 Back in Vladimir, we made a quick stop to visit a couple of notable churches in the center of town. The Cathedral of St. Dmitry had an lovely carved exterior, whereas the Assumption Cathedral was covered on the inside by colorful murals in addition to the typical icons. At this point it had finally sunk in for me that Russian churches also don’t have pews — instead the spaces tend to have smaller chapels and feel much more intimate.

The Cathedral of St. Dmitry.

Carvings on the exterior of the Cathedral of St. Dmitry.  Pretty impressive for a building completed in the 12th Century!

Exterior of the Assumption Cathedral.  No photography was permitted inside, so you’ll just have to trust me that it was very colorful inside.

Our trip to Vladimir ended up being pretty short, both because we had only intended it as a stop-over on the way to Suzdal and because we knew that one of the main sights in Suzdal would be closed the next day so we would need to arrive with time for a quick visit before it closed.  We’d heard that Suzdal was the best place to visit in the Golden Ring. Compared to Vladimir, we agreed (although admittedly we may have missed some of the more charming spots in Vladimir in our haste). The town of Suzdal served as a royal capital before power was transferred to Moscow. Apparently, the town petitioned to be included on the Trans-Siberian Railway when it was being built in the 1860s, but instead it was bypassed.  The town seems to have been frozen in time ever since.

After checking into our hostel in Suzdal, we went straight to the Savior Monastery of St. Euthymius, which looks like a fort.

The monastery is closed on Mondays, so we had to make it on Sunday. The signage (in Russian) suggested that entry was 400 roubles each, but for some reason we only ended up paying 200 roubles each.  Best we could tell it was probably because it was about 4:30pm by the time we got there and the complex was closing at 6pm.  The monastery grounds are enclosed in a high circular wall.  Inside was a church, several buildings housing museums, and gardens. 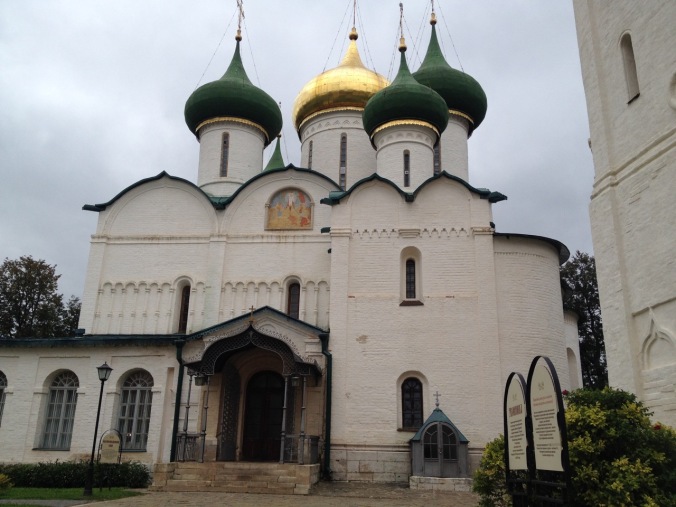 The Cathedral of the Transfiguration of the Savior inside the monastery.

The painted interior of the Cathedral of the Transfiguration of the Savior.  So much more color than the rest of Europe! 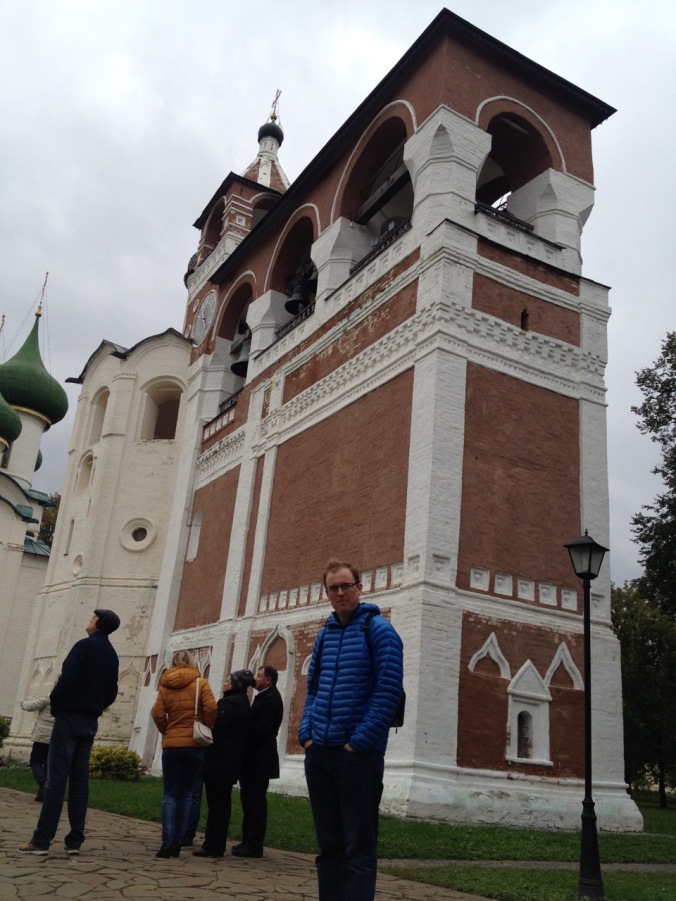 The bell tower next to the monastery’s cathedral. We heard a mini-concert while we were checking out the cathedral.

The church and buildings were pretty but the signs are all in Russian.  We quickly visited the various small museum exhibits, but it was difficult to follow the more historically-oriented exhibits without understanding Russian.  We did manage to understand one sentence in Italian, about a POW kept there in World War II — at least I could read that!

Our hostel was mostly empty but our host was friendly and helpful, even giving us a map in English and circling good food options and viewpoints. The Suzdal tourist map includes a proposed circular touristic walk that passes most (all?) of the towns sights.  Although it was cold and raining on our second day in town we walked most of the loop — however as the day went on (and it got colder and wetter) we spent less time and visited few of the attractions. Mainly it was pleasant to walk around the small town, visit the various monasteries, and view the lovely church exteriors. 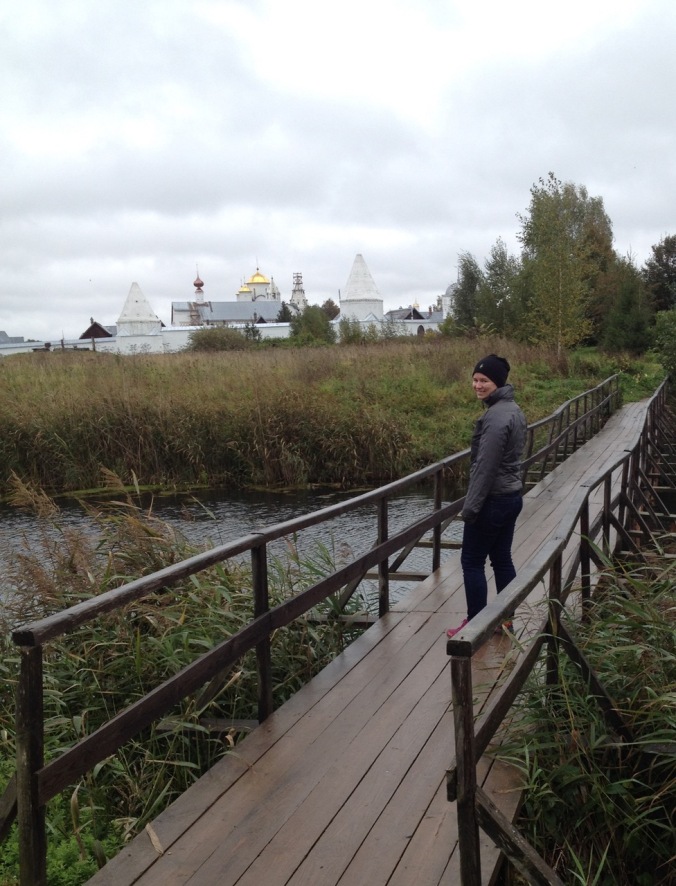 Elizabeth walking across the river to visit the Intercession Convent. Did I mention it was cold? 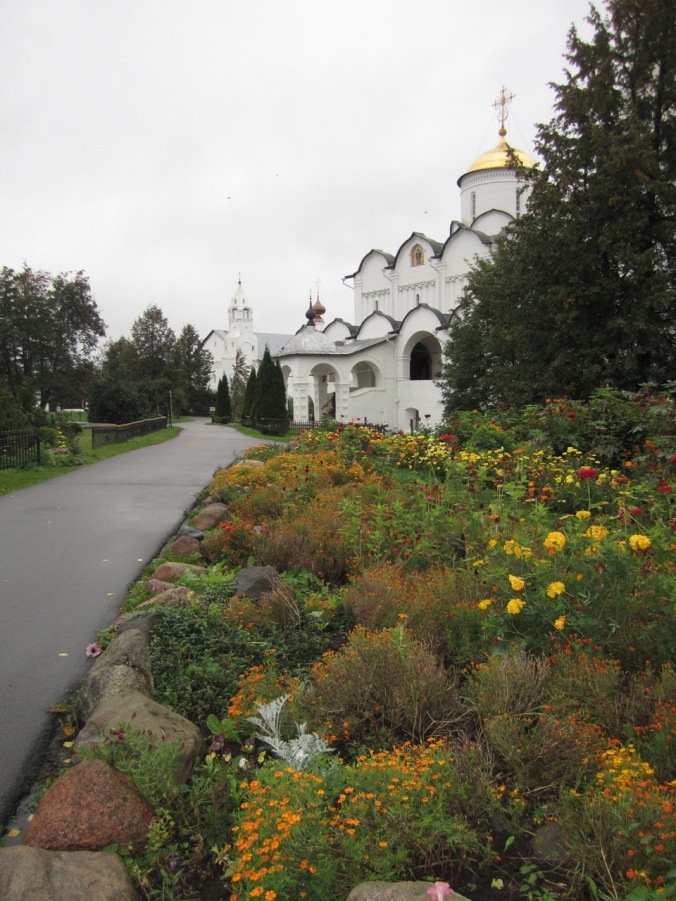 View of gardens and church inside the Intercession Convent.  The convent grounds were full of flowers, which added a nice touch of color on an otherwise grey day. 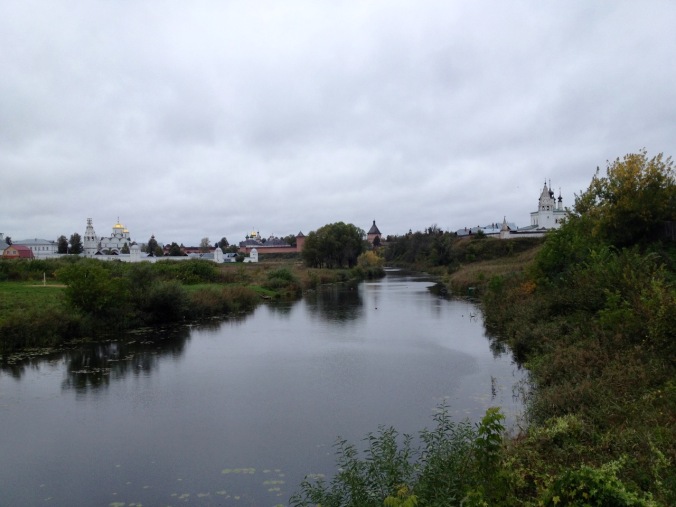 Suzdal is filled with churches, convents, and monasteries.  How many spires can you spot?

A random aside about Russian food: it’s been good. We didn’t expect it to be bad,but we have been impressed with the cheaper and midrange food that we’ve had. It’s a bit tricky for me to avoid unwanted meat, but touristed places often have bilingual (or in one case 36-lingual) menus. So back to Suzdal… 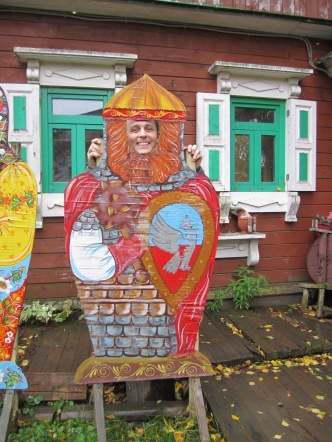 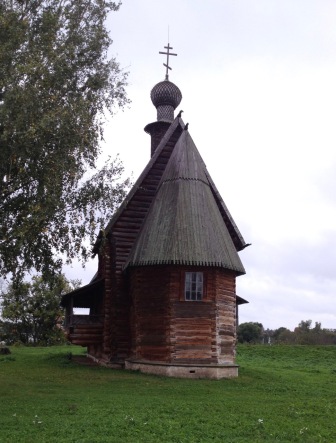 Given the cold and rain, we were looking forward to spending some time inside enjoying a Mead (honey beer) tasting, which we had heard that Suzdal was known for. 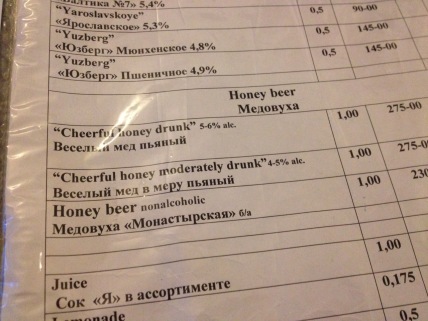 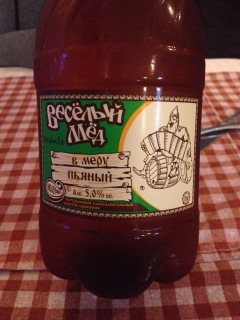 Our honey beer that we had with dinner the first night — we were apparently “cheerful honey moderately drunk.”  My favorite kind of drunk.

The first place we tried, which I think is the place featured in the Lonely Planet guidebook, only served bottles and pints, not tasting of several types — at least that’s what we figured given the host’s reaction. She appeared to have no interest in helping out a couple non-Russian speaking tourists or making a sale, despite the fact that her shop was otherwise empty.

Our second attempt was somewhat more successful, at a place with a bilingual sign on the door advertising mead tastings. But even there, the host poured small tastes in very quick succession. The tasting seemed to only be intended to quickly assist tourists with purchasing a bottle — no more. We bought a bottle, which helped with the long train ride the next day.

In all, visiting Vladimir and Suzdal was a nice stop, and our 1.5 days was more than sufficient for us without feeling too rushed (at least, not once we got to Suzdal). The cold rain didn’t exactly help, but maybe a bit of bad weather gave us a more honest taste of Russia.

Since the train does not go to Suzdal, in order to get there you have to take the train to Vladimir and then an onward bus to Suzdal. There are several express trains from Moscow to Vladimir each day that take less than 2 hours (the non-express trains can take double the time).  Once we arrived in Vladimir, it was easy to store our stuff in the basement luggage storage while visiting Vladimir.  I think we paid 200 roubles per bag — this didn’t seem to vary based on how long we’d be leaving the bags (another group was leaving their bags several hours longer and paid the same amount). Getting the bus to Suzdal is easy, as the bus station is across the street from the train station in Vladimir. Bus tickets are purchased from the ticket window inside (not from the driver) and the buses load behind the station (but on the return drop off in front of the station).  Buses depart every 30 minutes or so on the hour and half-hour, although there are a few gaps during the day. The ride to Suzdal took us about 45 minutes. The bus station in Suzdal is about 2km outside of town — don’t get off here! One trick that we learned (and that isn’t in Lonely Planet) is that if you remain on the bus, the driver will continue on into town and then turn up the main street and toward the Savior Monastery of St. Euthymius.  There is a separate fare for this (18 roubles each) that the driver will walk around the collect.  We didn’t pre-book our return bus, but it would probably be advisable if you’re visiting during high-season and have a train to catch.

[We’re making yet another attempt to get caught up on our blog posts.  This post describes our visit to Vladimir and Suzdal on September 18-19, 2016.]

One thought on “Russia’s Golden Ring (with rain)”