Our next big stop after Monachil (near Granada) was Sevilla. Since we were driving, we looked for places to break up our drive. Our first stop, Ronda, was actually a bit out of the way, but is on many tours of southern Spain and has an amazing super-tall old bridge. 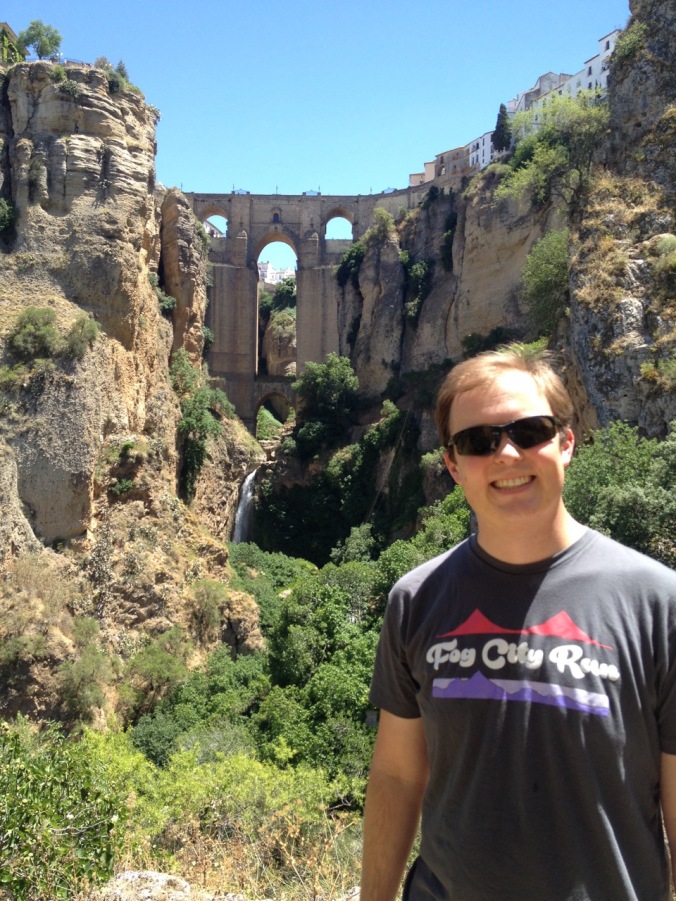 In front of the “new” bridge in Ronda. They started building in 1751 and it took 42 years to finish!  Says something about the age of the “old” bridge.

Ronda is a nice stop, with a great view, but not really much of a surprise. We hiked down the canyon for a better view of the bridge and briefly walked through the old town (and had a disappointing, overpriced salad) before heading on. 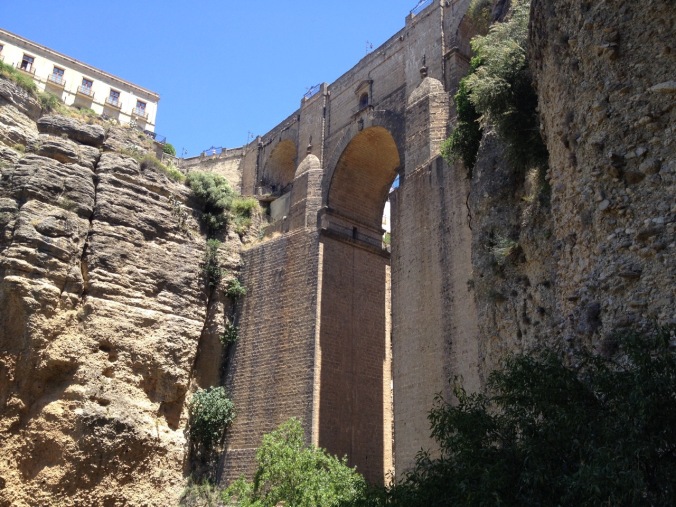 View after hiking down the canyon and approaching the bottom of the bridge (it’s 120 meters deep!).  Well worth it. 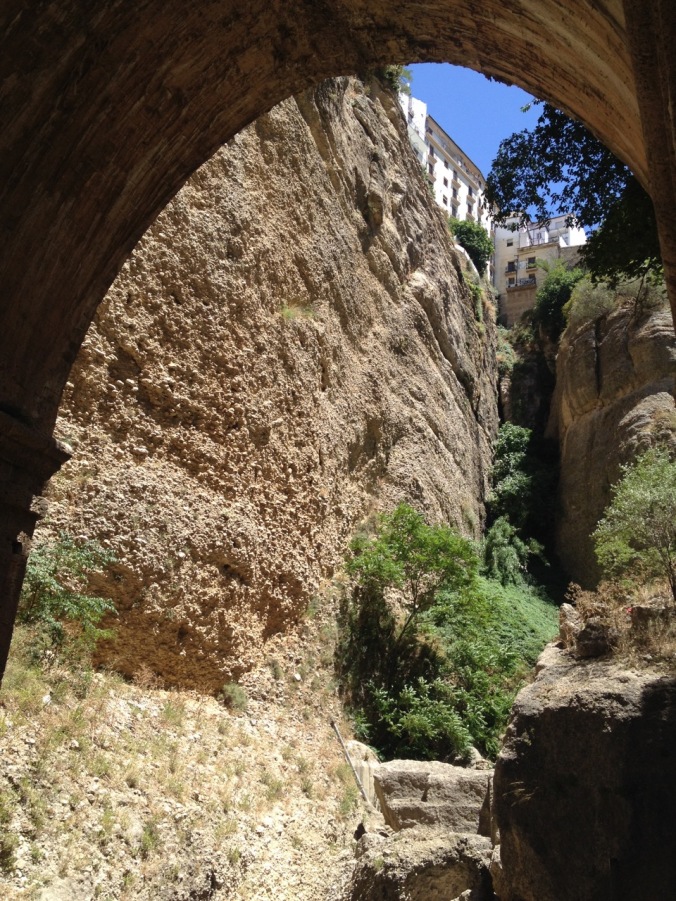 Peaking back up at the town from under the bridge.

Our second stop, Grazalema, was a small town up in the mountains that were beautiful and unlike anything else we had seen. The roads to get there were about as narrow as country roads in California (the narrow kind that don’t have a center line). The view was totally worth it. 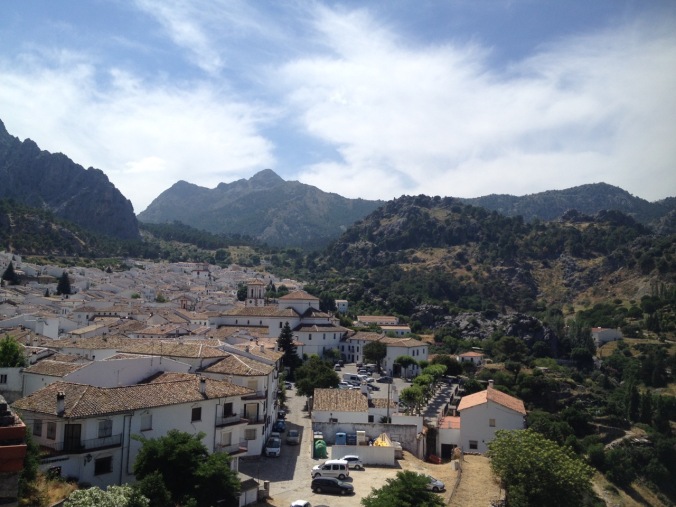 View of Grazalema. Every building had the same white walls/red tile roof architecture, giving the city a beautiful and quaint look. 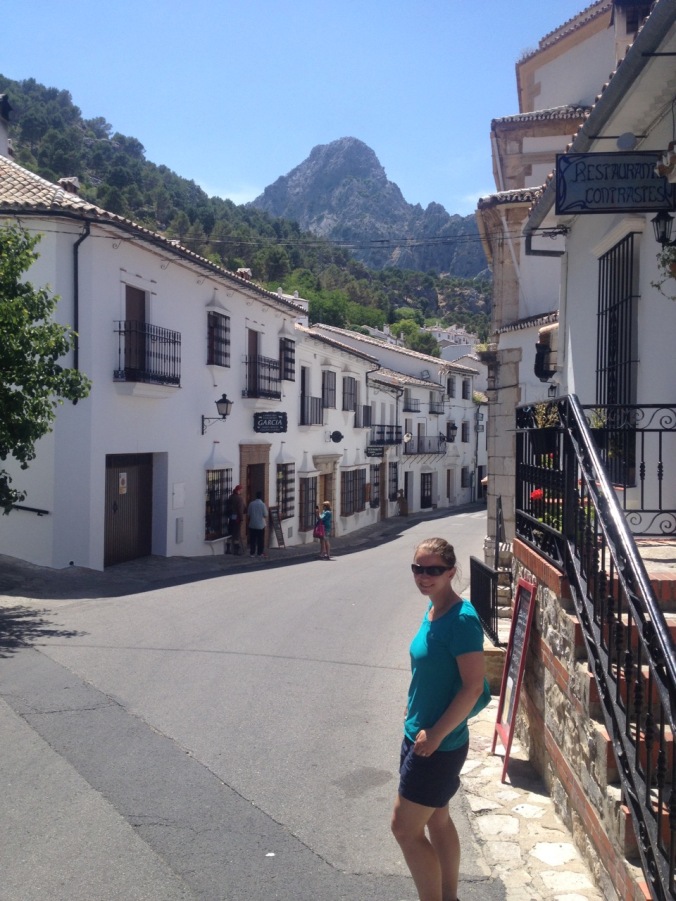 Exploring Grazalema. And by exploring, I mean looking for ice cream.  It was hot (again)!

[Elizabeth note: I’ll assume this is another Game of Thrones reference… sigh.]

In Sevilla, we experienced the downside of driving: getting stuck in really old city centers with tiny streets. We don’t have working data on our phones (we don’t have working phones for that matter), but we do have GPS, so we use an app called maps.me. The app works because the maps are stored on your phone so you don’t need data. It’s been very helpful. Unfortunately it sometimes makes decisions that human judgment would warn against. Like driving down a street that inevitably leads to the narrow centuries-old streets in the middle of Sevilla.

After a couple of six point turns and a lot of frustration navigating down streets with only inches to spare on each side of the car, we made it out and back around to our reserved place!

The next morning we visited the Alcazar of Sevilla. I’ve heard of people skipping this in favor of the Alhambra in Granada and the Mezquita in Cordoba. Dear reader: if you visit Spain, please do not make this mistake. The architecture is beautiful, and the gardens are fantastic. And in case I haven’t persuaded you yet and you are a Game of Thrones fan, the Alcazar of Sevilla and its gardens were the filming location for Sunspear, the capital of Dorne. 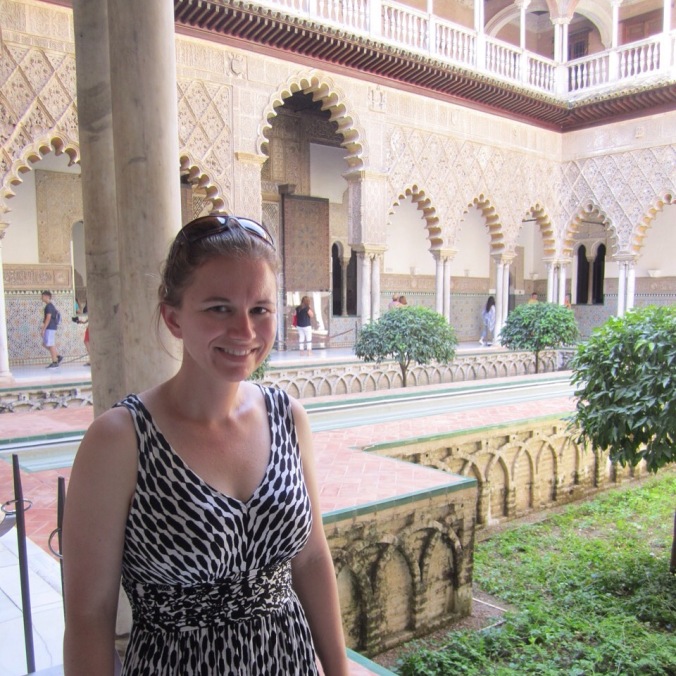 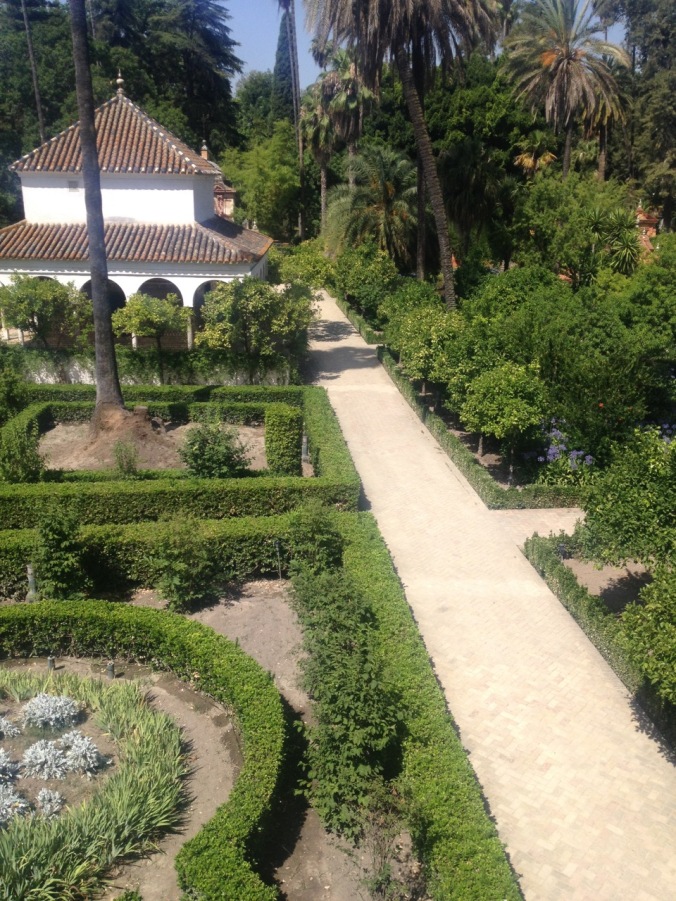 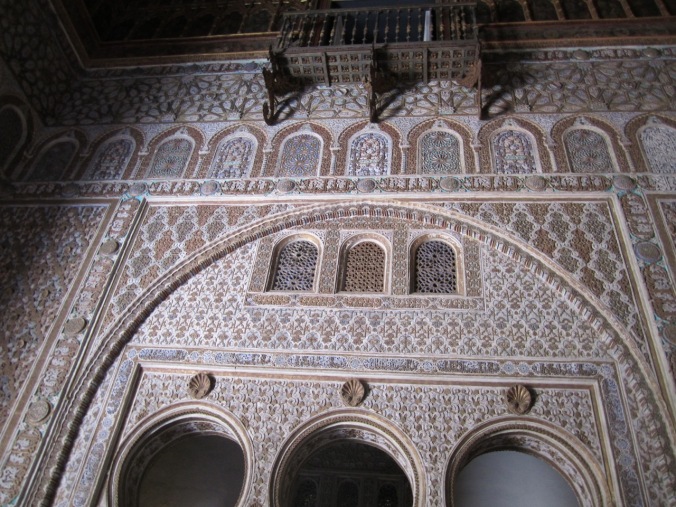 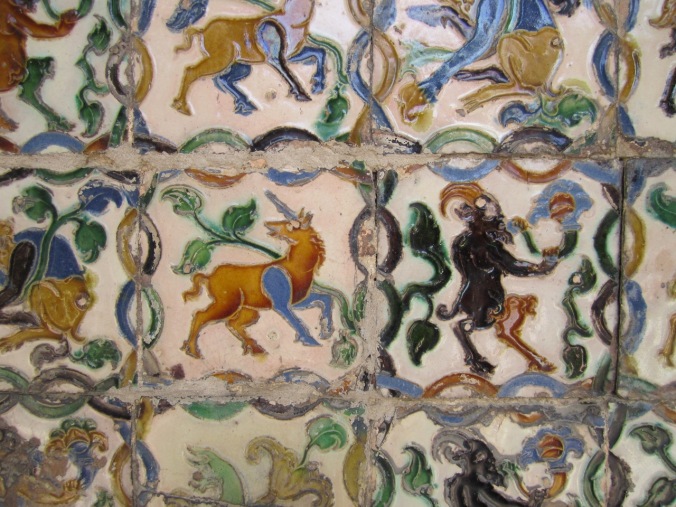 We also made a brief stop at the Archivo de Indias — a building that originally was a sort of customs house for trade with the Spanish colonies in the Americans, and now is a repository of primary source documents from that era. There are a few interesting displays of notable documents — my main disappointment was that I did not have a legitimate research interest to use as an excuse to see some of the old documents in the collection. It’s free and makes for a nice (air conditioned) stop near the Alcazar. 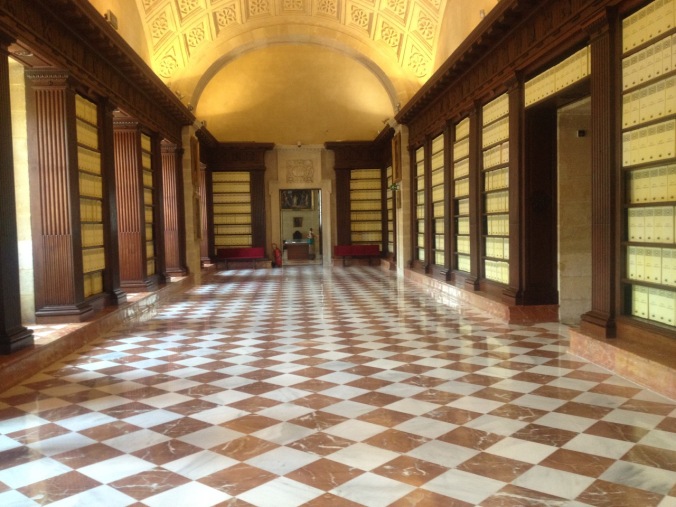 Inside the Archivo de Indios. Out of curiosity, we may have confirmed that these display boxes where empty when the guard wasn’t around… They have the real stuff locked up away from prying hands and only a few reproductions out on display.  Still a fun (and free) visit.

Have I mentioned yet that it was super hot?! We saw a sign indicating that it was 39 degrees Celsius (102 F).  Walking over to the Plaza España felt like quite a feat in this weather and didn’t make us want to hang out in the (very exposed) square.

[Elizabeth’s note: We also enjoyed great tapas in Sevilla! We stopped in at Bodega Santa Cruz and loaded up on tapas — everything from paella to a great baked cheese.  Six tapas plus a couple beers (small by American standards because the Spanish are weird that way) were enough to fill us up for about 15 euro.  Yum!]

We like and miss the ocean, so we made a day trip from Sevilla to Cadiz. Cadiz is historically significant — when the river silted up so that Sevilla could no longer function as an inland port, trade with the Americas moved to Cadiz. 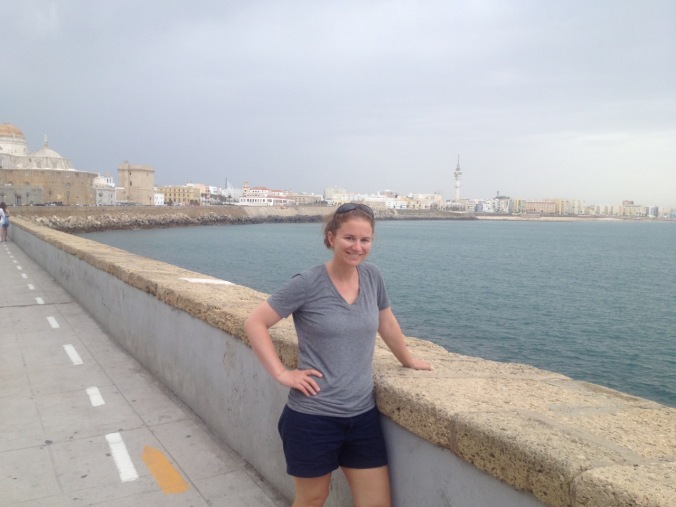 Walking along the coast in Cadiz. 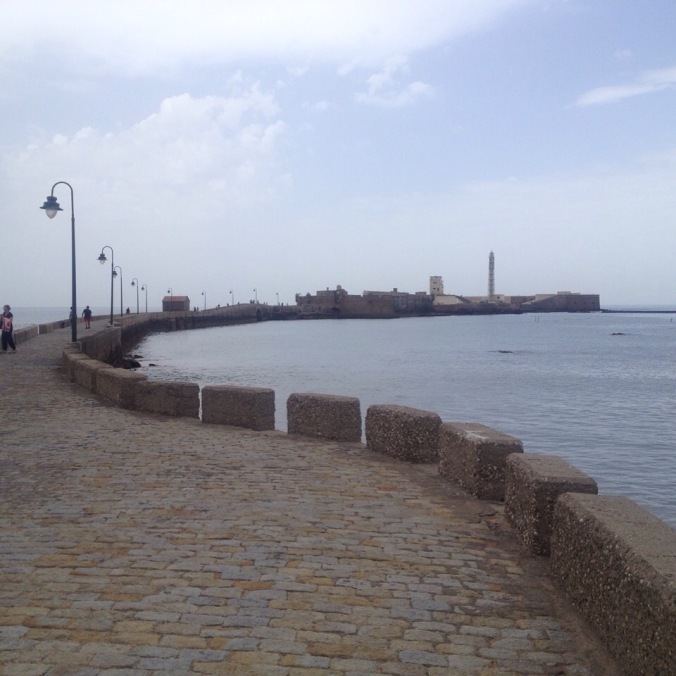 The one site that we did visit in Cadiz was the fort at the end of the peninsula.  A nice walk out and back.  We were impressed by the old men swimming in the ocean out near the end (it was actually cool there!) and it looks like they might be planning to put an exhibit space in the old fort.

Cadiz is a pretty city on the coast, but no more so than Essaouria in Morocco or Muxia in Galicia. Admittedly maybe a mistake as it was a long drive and we weren’t particularly interested in seeing any of the museums or other “sights” per se.

The final leg of our Andalusia road trip was Cordoba. Once the capital of the thriving Umayyad Caliphate and the richest city in Europe during the Middle Ages, Cordoba’s grand Mezquita (mosque) now has a Catholic church in the middle of it. While it lacks the extensive number of buildings or grounds of Sevilla’s Alcazar or Granada’s Alhambra, it is impressive in the size of what is really one giant room. With a church in the middle. 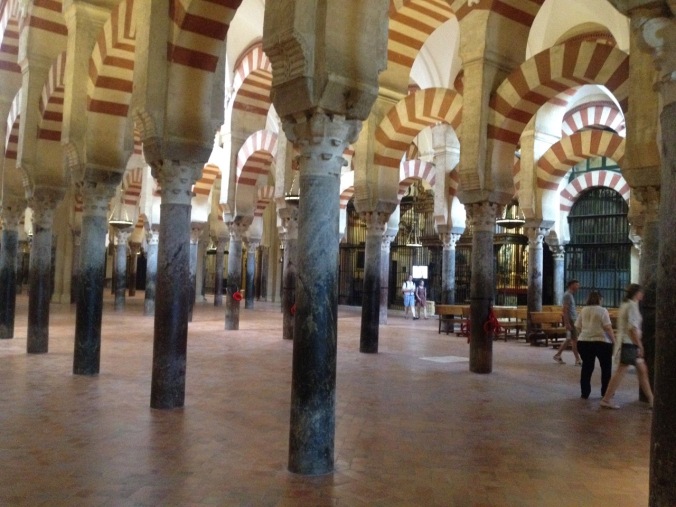 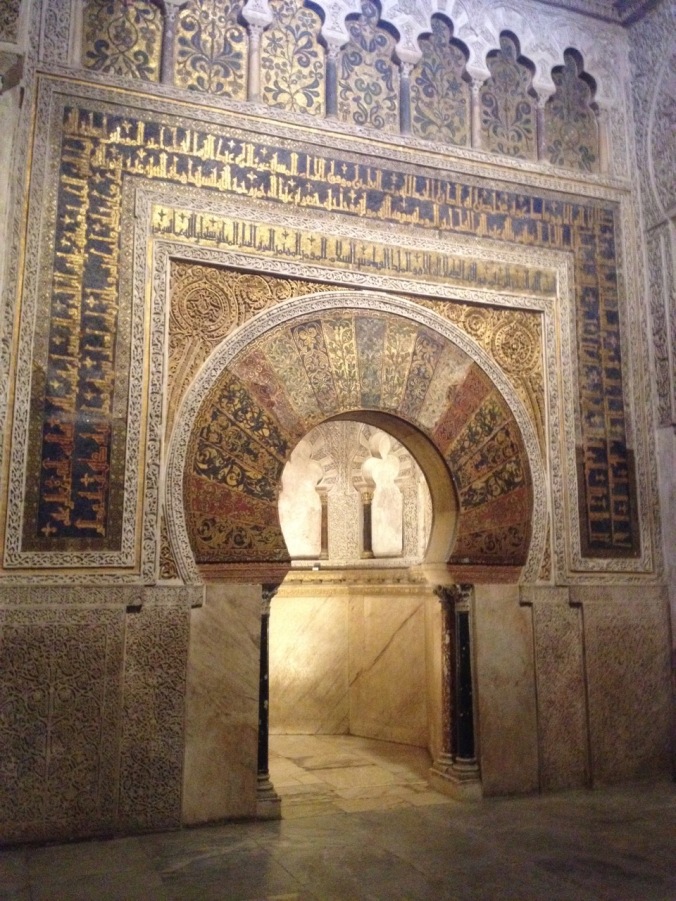 The Mirhab: a portal facing Mecca indicating the direction of prayer. 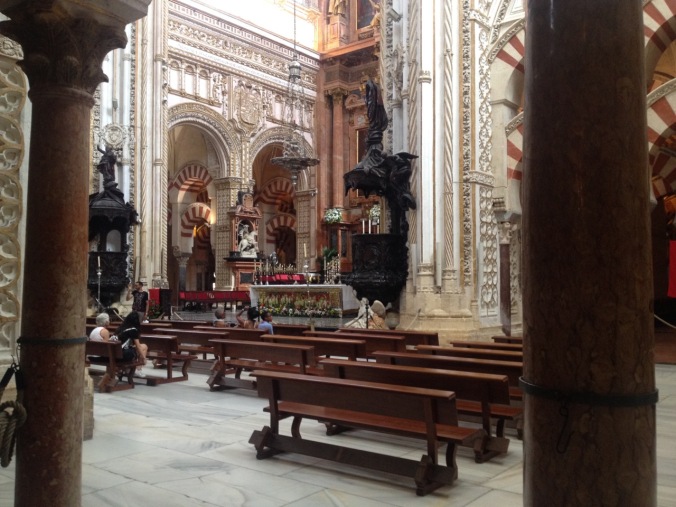 Church inside the Mezquita.

In the evening, we had our first chance to meet up with someone we knew before we started traveling! Chris and Liz were on a short (normal person length) trip in Spain, and we adjusted our plan slightly to end up in Cordoba at the same time. 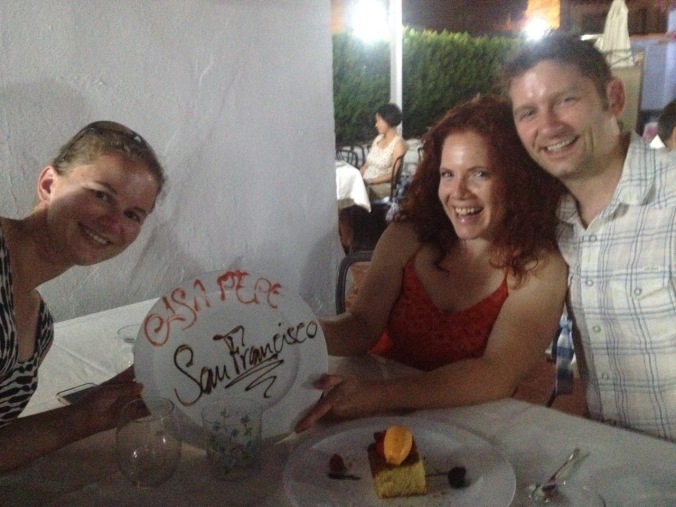 Dessert surprise with Liz and Chris.

Long term travel is a relief to get away from the daily grind, but I do miss seeing friends. And while I keep in touch with people online, it’s not the same. Having an evening to talk to people you know, all evening, in English, is a relief. They also brought us a few items that we had shipped to them, which was very helpful.  Thank you Chris and Liz!!! 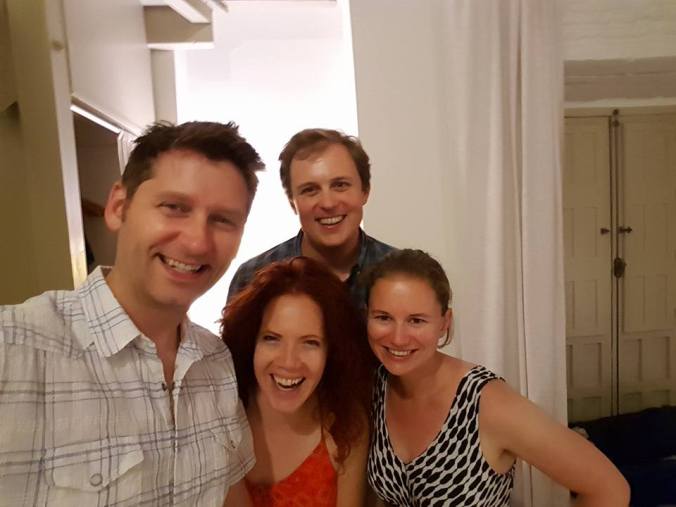 Stealing Chris’ selfie of the four of us together since we forgot to ask at dinner!