Day 12: Despite our prediction that staying in a private hotel room would mean that we’d get out faster in the morning (because we wouldn’t be forced to pack silently in the dark), we got a slow start this morning and left at about 8am.  My ankle is still acting up, making walking somewhat painful.  I spent the morning focused on maintaining a normal stride so that I do not develop any additional issues by compensating for the injury. 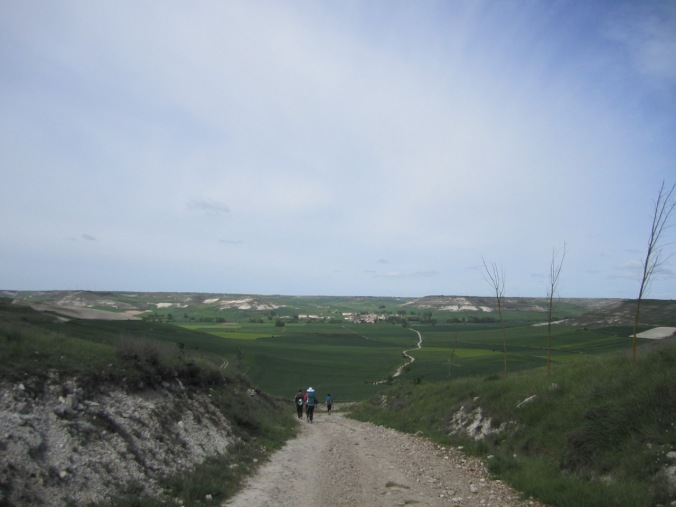 Looking down from a mesa on the meseta.

Today we officially entered the “meseta.”  This portion of the Camino is often referred to with dread — the land is very flat and there is little shade.  Based on the descriptions that I had heard, I’d imagined the meseta as being similar to walking along California’s I-5 during the summer.  The weather today was warm and we quickly learned that one of the side effects of the flat land is that you can see further along the path.  This emphasized just how many peregrinos are in on the Camino — a number that seems to have grown as we exit Burgos since it is a popular starting point (a large group of college students is staying in our albergue, having just finished their first day).  That said, what I’ve seen of the meseta is not quite how I expected it to be.  The land is very green and fertile with wildflowers along the path, not the brown land of California summers.

Small church along the path today (either in Rabé de las Calzadas or Tardajos).

Due to the heat, later start, and concerns about my ankle, we decided to put in a short day and only walk the Brieley stage of 21km to Hornillos del Camino.  We’re staying at a private albergue instead of the municipal one because the private one sounded like it would have better facilities.  Turns out that the facility itself is nice, but not very functional.  The nice kitchen has almost no pots or utensils — our plan to cook an omelette for a late lunch morphed into scrambled eggs when we discovered that there were no spatulas — and the albergue forbids outside beverages (especially weird in Spain since there are no restrictions on open containers more generally — which we took advantage of).  The Brierley stages for the next few days are pretty short, so we’re hoping to put in a longer day tomorrow in order to skip ahead a bit.

Day 13: I woke up this morning with a very sore throat, making it difficult to talk and painful to swallow.  Luckily, after about 5km or so, my ankle started to feel a bit better.  We were treated to a gorgeous sunrise as a reward for our early start.

Looking behind us at the sunrise through the hills.

It was FLAT for much of the day.

The morning’s walk was pleasant — we passed through the small village of Hontanas and past the ruins of the San Antón convent.  I’m guessing that the ruins were featured in the movie The Way (starring Martin Sheen about the Camino) based on the vendors/tour buses.  We arrived in Castrojeriz after about 20km and ran into a nice older Dutch couple that we’ve repeatedly crossed paths with.  They were able to direct us to the town’s pharmacy, were I picked up some throat lozenges and vitamin packets.  Since I was feeling fine other than my throat (and that isn’t really affected by hiking), we decided to walk on another 10km to Itero de la Vega.

The municipal albergue here is basically a spare room across from the church that they’ve put beds in (single beds, not bunk beds!).  There isn’t a full-time attendant, instead you find a spare bad, make yourself at home, and a woman stopped by in the evening to collect the town’s 5 euro a piece!  We’ve once again run into familiar faces at the albergue (Pete, an Aussie we first met in Tosantos and Kat, who we met in Atapuerca).

Day 14: Ugh.  This morning I woke up feeling even worse.  Swallowing was incredibly painful and I was feeling feverish.  I’m worried that I might have strep.  Given the lack of facilities in Itero de la Vega, however, there really wasn’t an option other than walking on.  After a couple kilometers, I knew that there was no way that I could put in a full day of walking (let alone the extra distance that we’d planned).  I couldn’t get warm, despite wearing my down jacket (which I normally can’t wear while hiking because I overheat).  We stopped in a cafe about 8.5km down the road for our morning hot coco and to rest.  Perhaps sensing that I wasn’t feeling well, a cat jumped into my lap to curl up for a nap!  After some hot water, honey, and country music (Michael noticed that the cafe was playing Garth Brooks), we decided to walk another 6km to Frómista (which promised to have a pharmacy), where we would look for a private room and stop for the day.

Puzzle’s, the bar.  Only of interest to fans of HIMYM.

I felt pretty dead by the time we got there and was grateful that we were able to quickly find a private room.  After a nap, we headed over to the pharmacy, where, upon hearing my symptoms, the pharmacist gave me a three-dose pack of antibiotics and advised that I continue using the “vitamin” packets that I’d received the day before (which apparently actually have an active ingredient because he said it would help with my fever).  We spent the rest of the afternoon relaxing and napping, before quickly exploring the town and grabbing dinner.  I’m already feeling somewhat better and hopeful that I’ll be feeling even better in the morning and able to walk.

The Iglesia de San Martín in Frómista was deconsecrated and declared a national monument.  They’ve done a great job restoring it and it’s now very popular with tourists.

Day 15: What a difference a day makes!  I woke up feeling so much better — my throat is still sore, but not in the same extremely painful way it was the last couple of mornings.  Even my ankle feels as good as new!  Today was a fairly easy 20km walk to Carrión de los Condes.  For much of the day we walked on an alternate route that paralleled the main route in order to avoid walking on the pilgrim “senda” (path along the highway that our guide refers to as the pilgrim “autopista,” or highway).  This alternate path was even shaded for part of the way!  A great relief on another hot day.

Heading down the senda in the morning — we can probably see at least a dozen people out in front of us.

View of the Ermita de la Virgen del río along the alternate route.

On our way onto the alternate route we had a random little encounter with a man who appeared to be a local on his way to work (nice pants, collared shirt, nice shoes, carrying a light jacket and nothing else).  We said good morning as he came out of a building and then he passed in front of us and started walking down the alternate Camino path that goes through no towns for about 12km.  He wasn’t carrying water or anything else, just looked like he stood up from his desk and decided to walk the Camino. He kept on for quite a while, though we lost track of him during the first road crossing.

Cool old building across from the cafe where we celebrated the Camino becoming our longest hike ever! 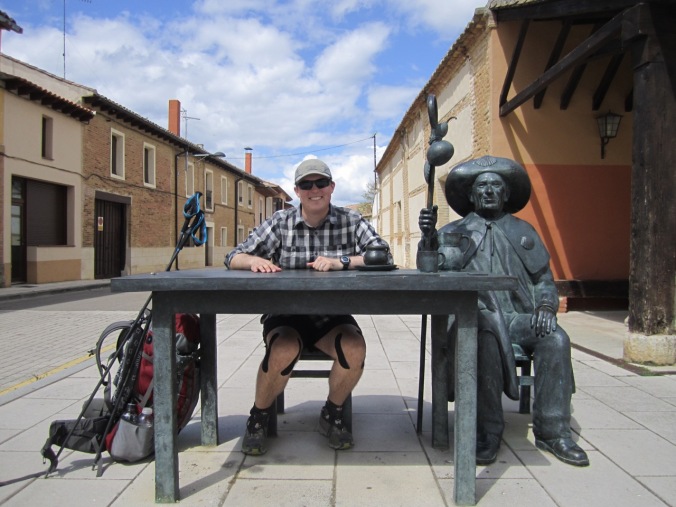 Michael sits down with a fellow peregrino.

Today we also celebrated walking further than we walked on the John Muir Trail last summer! [Note: we later discovered that our math was wrong and that this likely occurred on Day 14.]  In Carrión de los Condes we ran into most of the usual suspects again (Dutch couple, Kat, Amy from S. Cal., Seattle couple etc.) at our albergue (which was run by a group of hard working nuns).  We stumbled upon a farmer’s market (correct placement of the apostrophe, there was one farmer), purchased a giant head of lettuce plus some other veggies, and made a huge salad for dinner.  It was a nice change from the three-course pilgrim meals that we’ve been having.  A woman at the albergue even asked to take a picture of our salads, they were great!

Day 16: We woke up this morning feeling really good and ready to push for a big hiking day (day three on an antibiotics regime is the time to walk far, right?).  We sped through the morning kilometers — the path was flat and the walking was easy.  We took a couple short alternate routes to get us away from the road and also passed the half-way mark to Santiago!

A cloudy morning came to our rescue to aid the morning kilometers.  It was flat in every direction!

We arrived in Terradillos de los Templarios at around noon, the end of the Brierley stage at about 27km.  As the name suggests, the town used to be a stronghold of the Knights Templar, which played a significant role in protecting pilgrims on the Camino and had a strong influence on many of the small towns that we have been passing through.  We decided that since we were both feeling pretty good (minus that I’ve started coughing, always stage two after a sore throat for me), we would continue on for the day.  At a village a few kilometers down the road we encountered a number of hobbit holes!  Turns out that they are storage units built into the ground — perfect for storing vino! 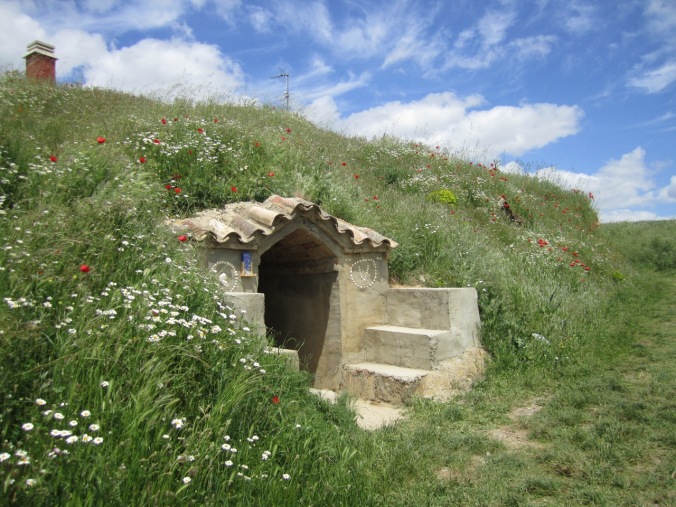 Hobbit hole!  There was literally a sign nearby explaining that these are not hobbit holes.

After a 40km day, we finally reached Sahagún at around 3:30.  We are both exhausted!  It also appears that blisters may be a side effect of long hiking days — I have one (and a half) that popped up during the second part of the day and needed to be threaded.  I guess I should consider myself lucky to be dealing with my first blister on day 16 (we’ve seen some nasty ones on other people), but I had been hoping to escape them entirely!  Despite being tired, we took a walk around town as Sahagún is known for it’s great churches and abbeys.  Michael even found an Irish pub that had Guinness on tap (for him . . . Coke zero for the girl finishing out her antibiotics).

We passed by the Ermita Virgen del Puente on the way into Sahagún.

We’re both a bit sore, so hopefully a good night’s rest is in order before tomorrow’s walk.  Only a couple more days before we get to León!