In a complete change of pace from cold, orderly Stockholm, we set off for Marrakech, Morocco.  The difference was apparent from the moment we boarded the plane — individuals did not board in zones or by row number, instead, everyone rushed the gate as soon as it opened and pushed their way to the front of the line.  The flight itself was the loudest that I’ve ever been on; everyone chatted loudly for the duration of the five hour flight.

After scrambling to get to our riad (Moroccan hotel with inner courtyard) on our own (as the pre-arranged transport did not arrive), we got an overview of the city from our host and set off to explore (and eat our way through) Marrakech.

Courtyard of our riad.  In contrast, our room was very plain.

The main open space in Marrakech’s medina is the Place Jemaa El Fna — a large open plaza of sorts that twists and turns its way into the souks (the labyrinth, covered shopping area).  Jemaa El Fna is huge!!  The space has been in use since 1050 AD and was reportedly originally used for executions.  It now functions as a huge gathering space that takes on a carnival-like quality after dark.  There are aerial acrobatics and tumbling shows, snake charmers, women drawing henna tattoos, vendors with monkeys to take your picture with, fresh orange juice stands, and food stalls in the evenings. 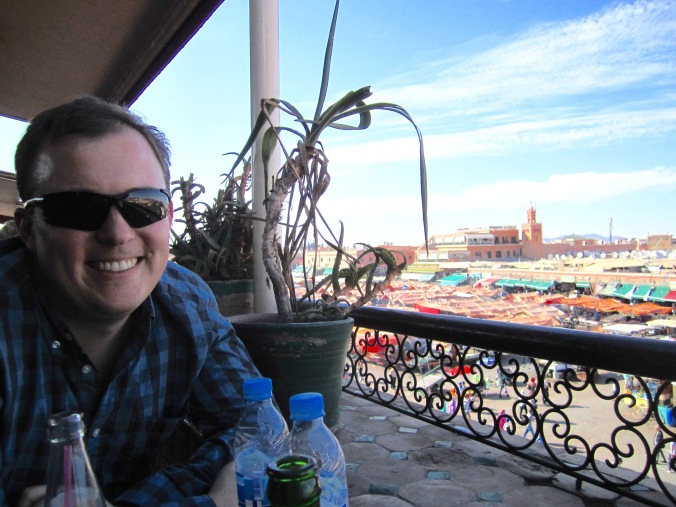 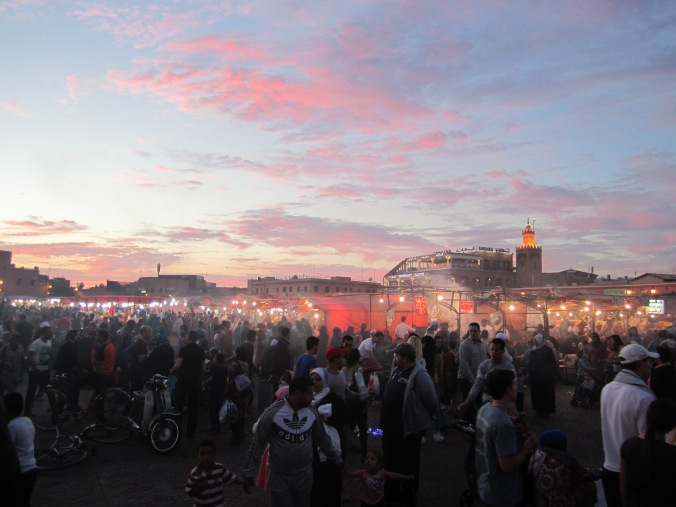 The crowds packed into Jemaa El Fna at night.

Our favorite orange juice stand, which also featured “red juice,” i.e., orange juice with strawberries.  We may have stopped by a few times.  Michael claimed that he had mixed feelings about the fact that the stall was run by a guy wearing a Manchester United football jersey (but I think that he liked it).

Michael found himself with this little guy on his shoulder as soon as he noted to me that the monkey was wearing a jersey for Luis Suarez (who has a track record of biting other players).  While normally we would have just walked away with no picture (and no tip), we decided to give in this time.  The monkey did not bite.

Just north of Jemaa El Fna is the primary location of the souks in Marrakech.  Although there are other souks in the city, this is the largest one and it was fun to explore the maze of shops.  The shops are generally organized by subject-matter, with leather in one area, metalwork in another, spices in a third, etc.  And it is a maze.  At one point, we ran into dead ends, but since we knew there was more to the souk behind a wall, we went upstairs, around a corner, over a bridge, and down on the other side.

Since we are traveling light, we aren’t planning on purchasing many souvenirs along the way, but I did want to pick up a scarf for additional modesty and sun protection.  After a bit of searching for one that wouldn’t look exactly like the ones I saw in India and a bit more haggling, my shopping was done for the day and we were free to explore (although not free from the constant urging of the touts). 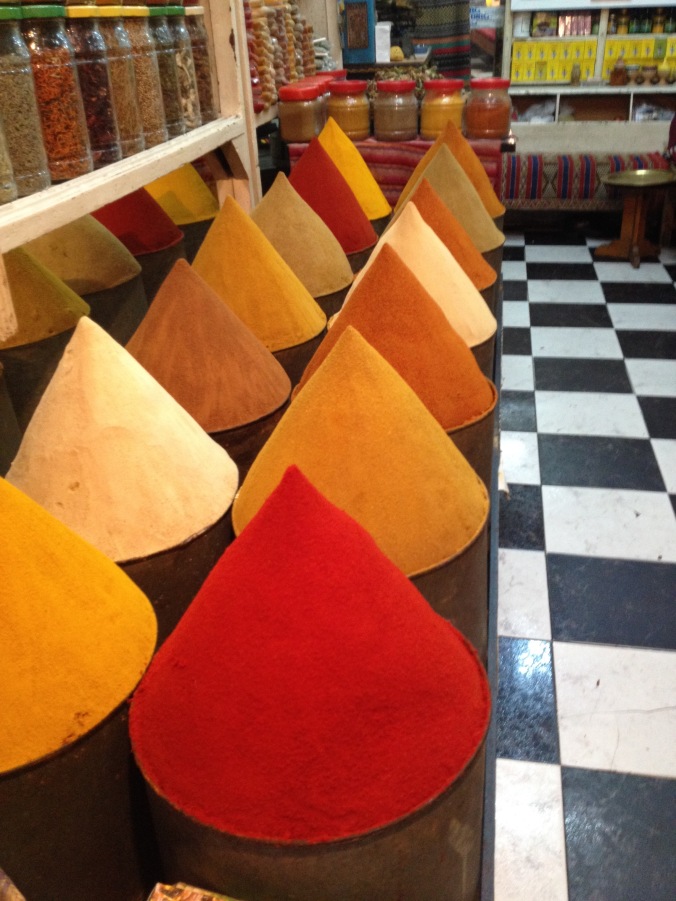 Mounds of spices at a souk.  Of course, because such perfect points are impossible, these are actually foam displays with a small amount of spice glued on for color.

We ate (very, very) well in Marrakech.  On our initial walk through the medina (the old, walled city) we quickly discovered amazing tagine at a hole-in-the-wall shop right outside the main tourist area.  A tagine is a Moroccan slow-cooking clay pot with a cone lid. Meals cooked in a tagine are also called tagine.

While we tried out the food stalls in Jemaa El Fna in the evening, the tagine from our hole-in-the-wall shop won our vote for most flavorful (and therefore earned a return visit for lunch the next day).  The lamb sausages from the food stalls (stall #32 for the win) were pretty tasty though. 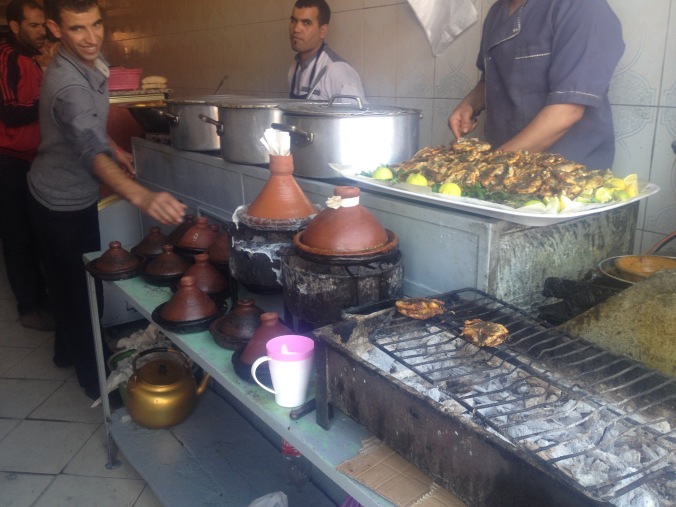 Our favorite tagine spot.  The guy on the left would patiently explain to us what was in each tagine and pot.

We were also forced to try a variety of Moroccan desserts that we saw being sold along the street and in the souks.  It was a tough job, but I did my part.  It’s okay to eat dessert two (or more) times per day, right?  Luckily for my waistline, and unluckily for our feet, our riad was about a mile from Jemaa El Fna and even further from a bunch of the sites that we wanted to visit, so we estimate that we walked about six miles per day while in Marrakech.

Amazing little treats filled with marzipan.  So pretty and delicious!

Although we have no picture documenting the meal, our final dinner in Marrakech was also noteworthy, if not a bit unusual.  I enjoyed a lovely rooftop meal that consisted of a wonderful camel burger with a date milkshake.  Both the burger and shake were excellent!

Up next — the amazing sights of Marrakech…

One thought on “Wandering the Souks in Marrakech”