I slept well last night despite my bruised hip, although getting up this morning was still a struggle. The good news is that my foot seems to be healing well and I was able to get my shoe on and walk around without too much pain. We packed up our stuff and then stopped next to the Mazama Village store to fill up our water bottles and enjoy a couple of the homemade English muffins that we received from my friend Angela topped with hazelnut butter.

Seven in the morning is not the ideal time to hitch out of Crater Lake park and back to the PCT, so we walked the mile back along the road before finally joining back up with the PCT. We were immediately assaulted by a swarm of mosquitoes that seemed impervious to our bug spray. I resolved to switch out of my short sleeved shirt to a long sleeved one as soon as we got to the rim (where I could change in peace inside away from the swarming bloodsuckers).

Within a couple miles of rejoining the PCT we were off it once again, this time to hike the Crater Lake Rim Alternate trail. I think it’s sort of crazy that the official PCT passes so close to Crater Lake but doesn’t actually go up to the rim for a view of the lake. It’s no wonder that so many hikers take the alternate route that follows along the rim for several miles. We’d heard a lot of conflicting information about the status of the rim trail this year — that it was covered in snow, that part of it was closed, that the road is closed, that the trail is actually open, and that someone died a couple days ago along a snowy section of the trail. I’m still not entirely certain which of these rumors is true.

We stopped at the Cafe and gift shop along the rim to pick up a cold drink and postcards. We only belatedly realized that we didn’t have the addresses for several of the postcards that we wanted to send out and that we couldn’t actually mail anything from this location. Looks like we’ll probably be carrying the postcards until Bend now. 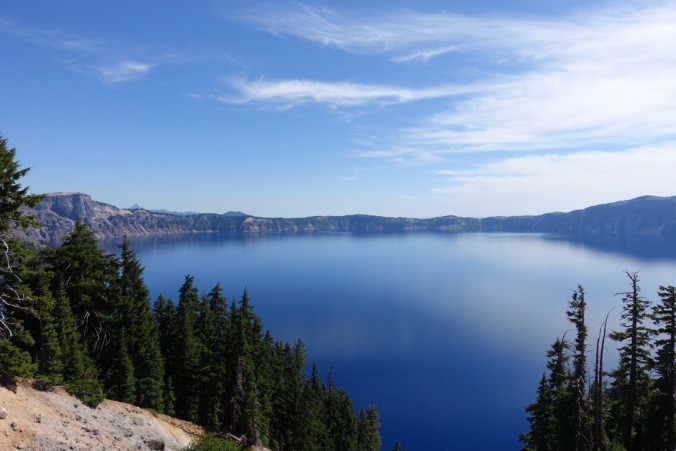 The lake itself was beautiful. A deep shade of blue with only the smallest disturbance of the water’s glassy surface. We’ve both previously visited Crater Lake, so this wasn’t a first for us, although it was the first time we had to walk to get to the park! 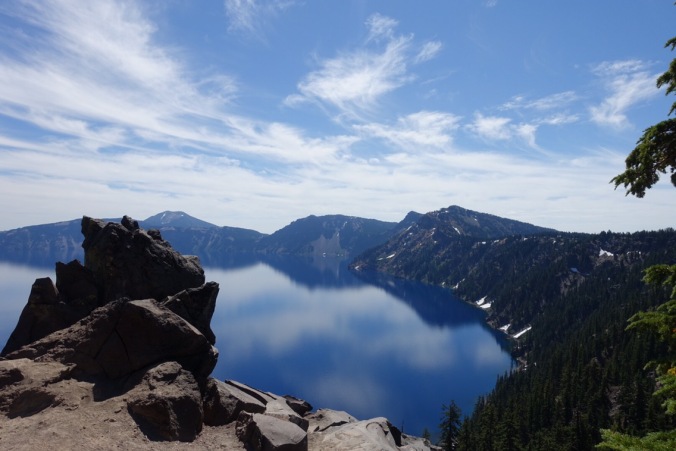 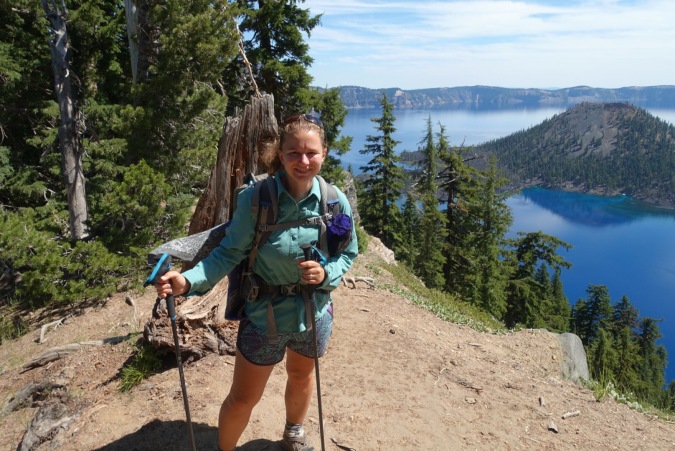 We only ended up walking a couple miles along the rim trail before we exited at the Lightning Spring trail. We’d heard that the rim trail was closed after the Watchman and accordingly did not collect enough water to make it around the (very dry) rim. When we later heard that maybe the trail wasn’t closed and was just covered in snow we decided to just stick with our original plan of exiting the alternate early. We still got to enjoy some lovely views and see the rim and I didn’t feel like the reward of a couple additional miles along the rim was worth tackling the snow with and injured foot and insufficient water. Ironically, by exiting the alternate early, we ended up walking significantly longer than if we’d either stayed on the PCT or walked the entire alternate (which is shorter than the PCT). Hopefully we won’t be regretting this later on if we run out of food!

Construction on the Rim Road.

The rest of the day’s hiking was rather uninspiring. We alternated back and forth between burn zones and tree covered sections. No other hikers seemed to be out on the trail today, so it felt like we were all alone. As the afternoon progressed, it seemed that we were walking into a large, ominous cloud bank. A couple times I thought I could make out the sound of thunder in the distance. 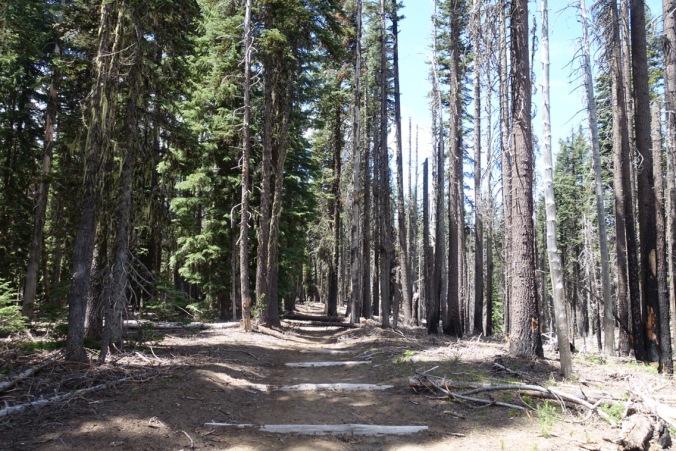 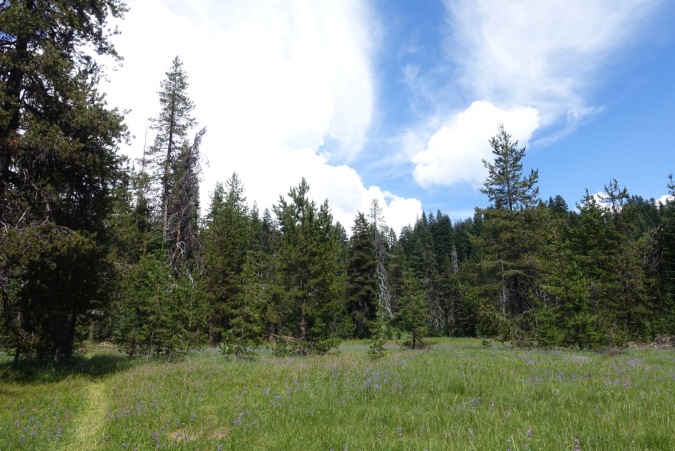 We ended up stopping pretty early today. Despite our late start and time spent enjoying the rim, we still managed to hit Red Cone Spring at approximately the 20-mile mark before 5pm. This is the last water for 20 miles so we decided that it made the most sense to camp here and cover the dry section tomorrow without needing to carry the extra water to dry camp. I may have also been influenced by the fact that I am still feeling tired and sore so I’m hoping the early evening will hit the spot. 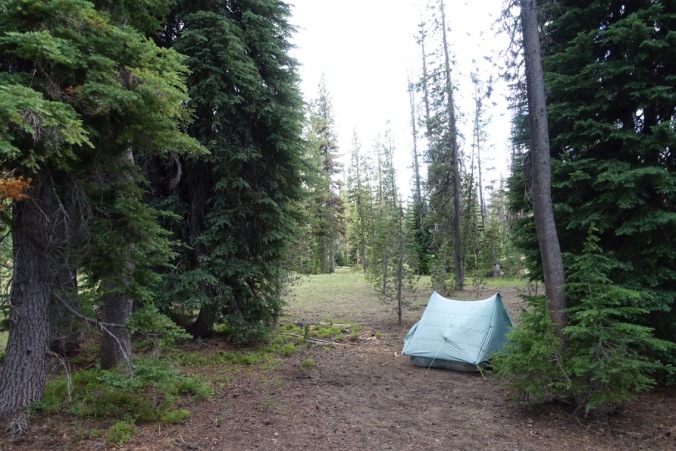 We’re camped away from the spring a bit and managed to eat dinner outside before being chased into the tent by mosquitoes. It’s been awhile since we managed dinner outside of the tent, so I’ll take that as a win. Within an hour of hunkering down in our tent, I noticed that the dark clouds were approaching us. The sound of thunder began to fill the sky. As I write this, it’s currently raining and the low rumble of thunder is near constant. Occasional bright flashes of lightning illuminate the tent.

My fingers are crossed that the rain will let up by morning. We have a big day in front of us in order to put ourselves in a good position to make it into Shelter Cove for our next resupply before our food runs out. In the meantime, I think this might be an eye cover and ear plugs kind of night!