[We’re a couple weeks behind on our blog posts right now.  We’ll update soon about the rest of our time in Mongolia and our visits to Beijing and Xi’an.  Today was such an amazing day though that we didn’t want to wait to post about it!]

Wow, what a day!  A perfect example of the best laid plans going awry.  Which is saying something for us since we don’t tend to do any planning and things generally work out more or less as expected.

When I first read about China’s Mt. Huashan, I knew that I had to climb it.  A simple Google search (using my VPN since Google is blocked in China) turns up numerous hits on how the trail is the “most dangerous trail in the world.”  (See this HuffPo piece.)  Why it’s deemed so dangerous is showcased by the first several hits on the google image search, which feature the mountain’s crazy plank walk.  Situated thousands of feet up the sheer cliff, hikers scoot their way along the cliff-face on a wooden plank.  Oh, and it’s two-way traffic.  Now, before you judge me as having completely lost it or having a death wish, I should point out that you are required to rent a harness.  So in theory it should be perfectly safe… right? 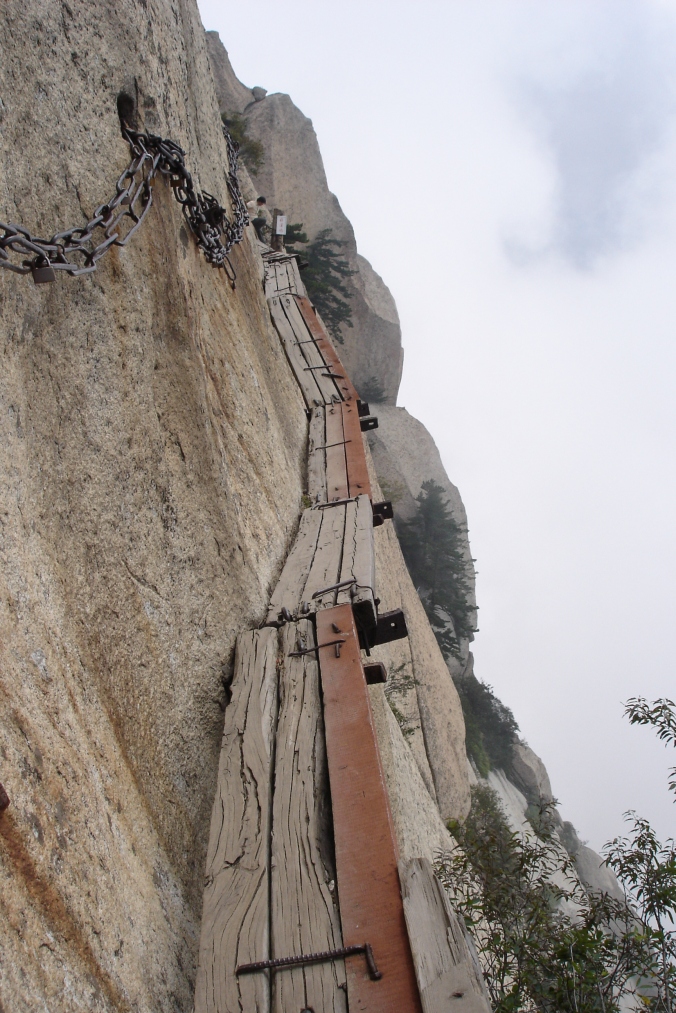 We set off from Xi’an (home of the famous terracotta warriors) yesterday afternoon on the high speed train to the town of Huayin at the base of Mt. Huashan.  Our plan was to stay overnight at the base of the mountain so that we would have plenty of time to hike up the mountain.  While most tourists take one of two different cable car routes up the mountain, we decided to save some money (they are so expensive) and enjoy the hike up.  Our helpful guesthouse host told us (using a mobile translator) that our intended route should take around 11 hours, which included hiking up and down the mountain from the Jade Temple to the North Peak and then submitting each of the mountain’s five peaks. 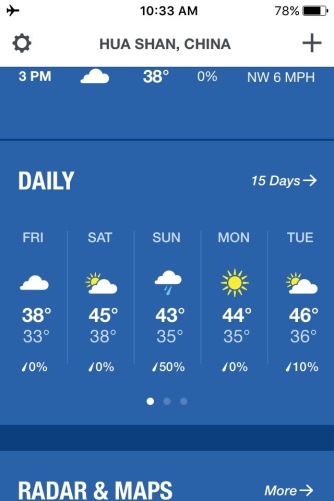 After days of rain, we were excited to see that weather.com forecasted a 0% chance of rain.  This was good news because I’d read that the conditions on the mountain were especially dangerous when there were crowds (not a huge issue at this time of the year), or the trail was wet or icy.  I crossed my fingers that the trail would have dried out a bit from the rain and contemplated who would be crazy enough to go up later in the winter when it snowed. 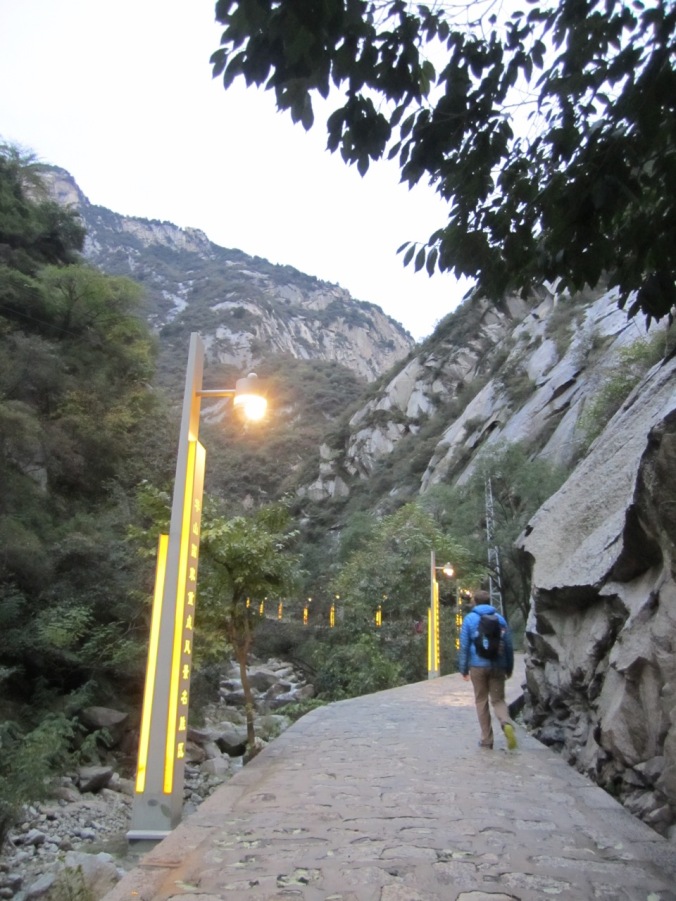 Heading up the mountain just before sunrise.  The rocks in the manmade walkway made for a somewhat slippery climb.

Our first glimpse of the mountain.

We got a somewhat latter start than we had intended (trying to purchase last-minute flights to Hong Kong) and reached the Jade Temple and starting point for our hike at around 7am.  As we started climbing up the mountain, I started to worry about how wet and slippery the trail still was from this past week’s rain.  Hopefully it would dry out by our afternoon descent… 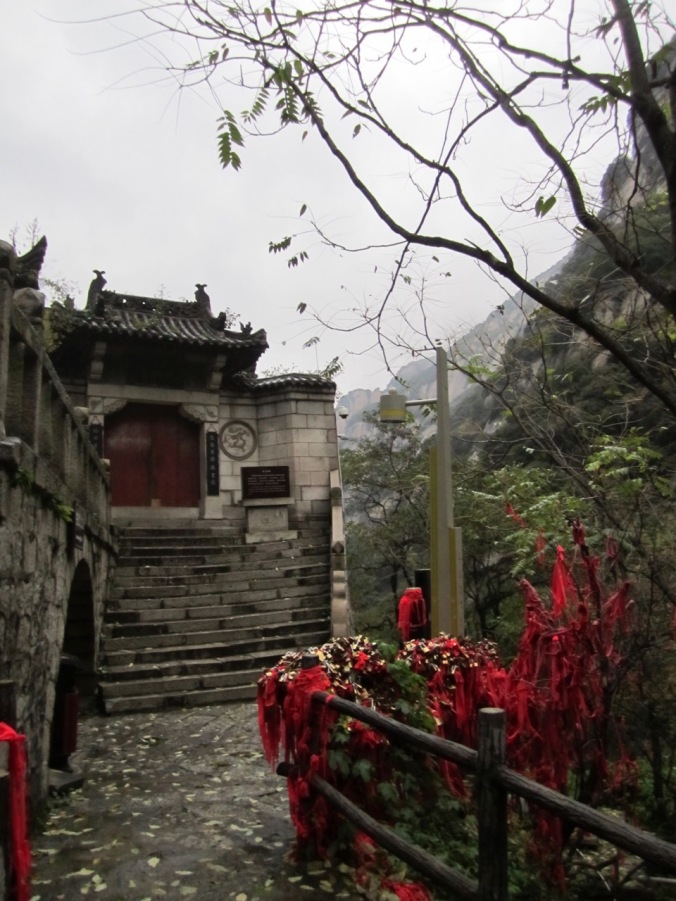 There are a number of temples along the route.  This one is called, no joke, the Hairy Woman Cave.

Then it started to rain.  I hate you weather.com.  You promised us a 0% chance of rain!  The rain came down lightly at first — more of a mist than anything.  The rain slowly became harder and we finally gave in and put on our rain jackets, deciding that the rain was now worse than our sweat.  Of course, this happened just as we hit the first super steep stairway.  Using a pair of cheap gloves that our guesthouse owner provided us, we used the rusty chains along the staircase to help steady us in our ascent.

It’s hard to capture just how steep this staircase was.  Trust me, it’s steep.

And then I realized that it wasn’t raining anymore.  BECAUSE IT WAS SNOWING.  Umm.  This was not in the forecast.  Rain I could believe.  But snow?  What the f*** weather.com.  At this point we start to wonder… should we be doing this?  Problem is that turning back also doesn’t seem like a great idea at this point because the steep slope is super slippery, which is harder to deal with when going downhill.  We decide to keep climbing, knowing that if conditions are really bad at the top of the first peak we can easily cut our hike short and take the cable car down.

By the time we get to the top of the North Peak it’s apparent that conditions have only gotten worse.  The snow has stuck and is accumulating at a decent pace.  More importantly, ice has formed along some of the pathways and stairs.  At times we are more or less pulling ourselves up the steps by the chains along the path.  At the peak, we start to see more tourists — they’ve all taken the cable car up.  Not an overwhelming number, but enough that we start to see people falling on the steps and pathways.  Most pop back up with a smile on their face, so I guess all is well. 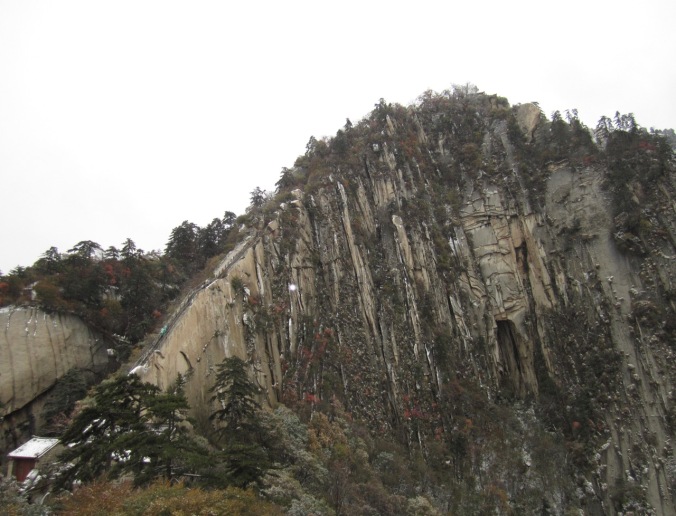 Can you spot the staircase along the ridge line of the mountain?

At this point, Michael is definitely in favor of taking the cable car right back down.  A hot shower at our guesthouse sounds good.  We’re both getting cold and our now-wet gloves are not exactly keeping our hands warm.  A break for hot tea and coffee in an otherwise abandoned tea shop warms us up and bit and it appears that maybe the weather is improving.  We count our cash and realize that we comfortably have enough to take the cablecar down from the North Peak.  We don’t have to risk walking all the way down the mountain in these conditions.  But, as crazy as it sounds, I still want to do the plank walk.  I figure, at least you get a harness for the walk, so it should be a lot safer than the icy trail and stairways… right? 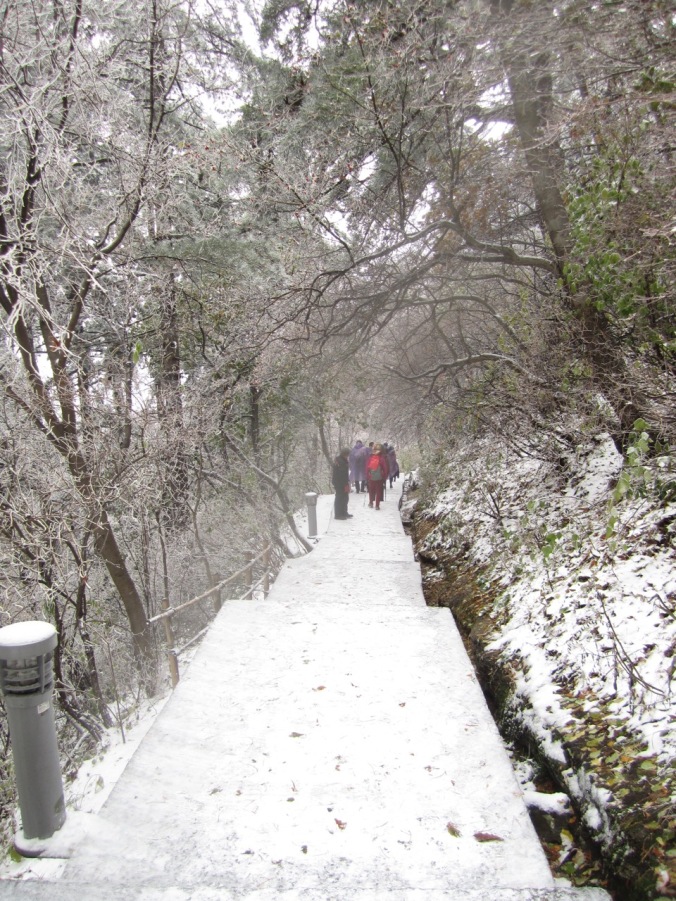 Turns out that conditions don’t exactly get any better.  The North Peak is the shortest of the five peaks, so we have more staircase climbing to go.  In some areas the trail is completely iced over and I grip the chains wherever possible.  A few times I consider turning back, but after awhile it doesn’t seem much easier to go back the way that we’ve come.  The trail could get better going forward, right?  We also realize that we’re now getting much closer to the second cable car option from the West Peak.  The problem is that it is more expensive and we don’t have enough cash for the cable car and the plank walk harness.  Maybe they’ll take credit cards?  Seems unlikely…

Another trail in the distance along the ridge line.  Many of the chain link railings were covered in frozen prayer ribbons and icy locks.

As we make the final approach to the plank walk we find ourselves on a narrow, very slippery pathway along the side of the cliff.  There’s a railing, but it’s not very high.  I’m slipping and sliding down the icy pathway, holding on to the chains to stay upright.  Michael declares that this is enough for him, he’ll skip the plank walk.  I’m feeling a bit hesitant, but still determined to go forward.  It’s a once in a lifetime experience.  Especially if you fall…

As we turn the corner we discover that the plank walk is closed.  Which is likely a good thing since climbing down an icy metal ladder onto an icy wooden plank is probably not the best idea at this point. 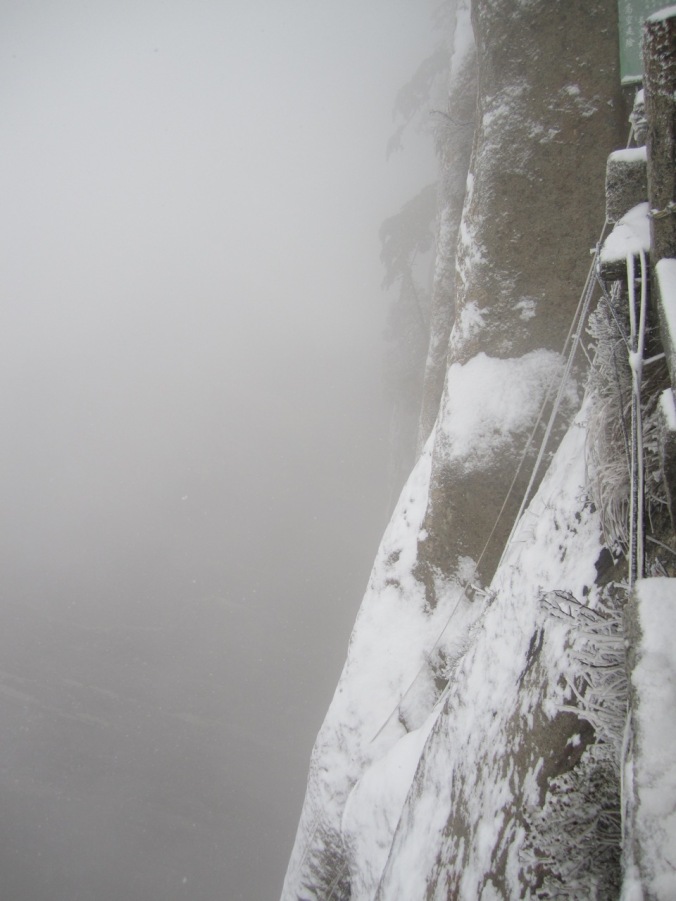 Looking over the barrier at where you’d climb down to get to the plank walk. 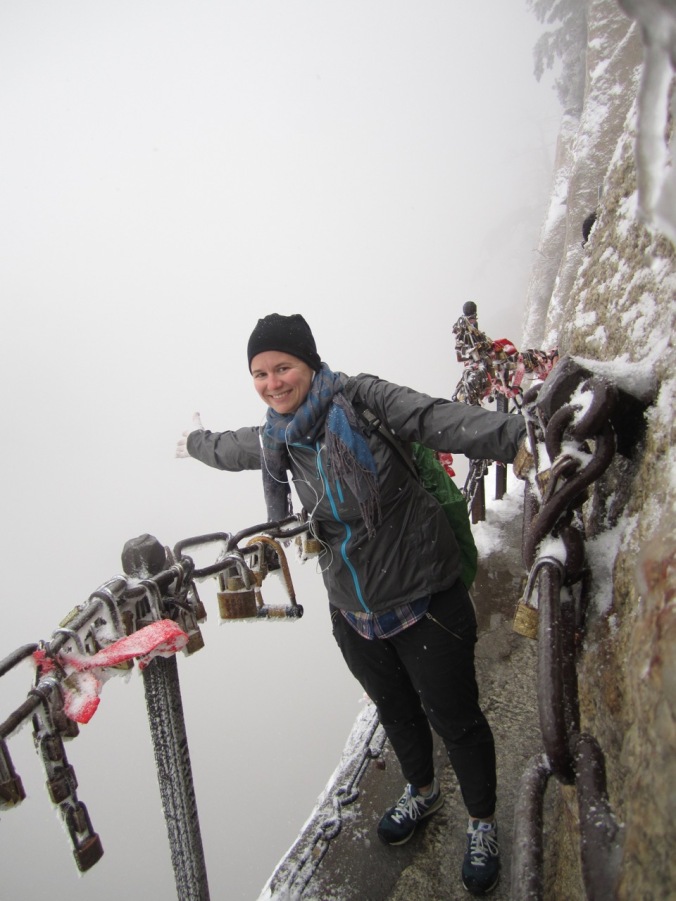 You’ll have to trust me that the drop off here was huge.

We slowly make our way to the West Peak cable car.  Conditions seem to be even worse and I find myself gingerly making my way down the icy steps one at a time.  More people around us are falling on the ice.  Going down is way worse than going up and I’m grateful that we’ve decided to take the cable car — even if it costs a whopping 180 Yuan each ($26)!!  The ride is about 25 minutes long and crosses two gorgeous deep canyons.  [Also, turns out they take credit cards after all (which is super rare here).] 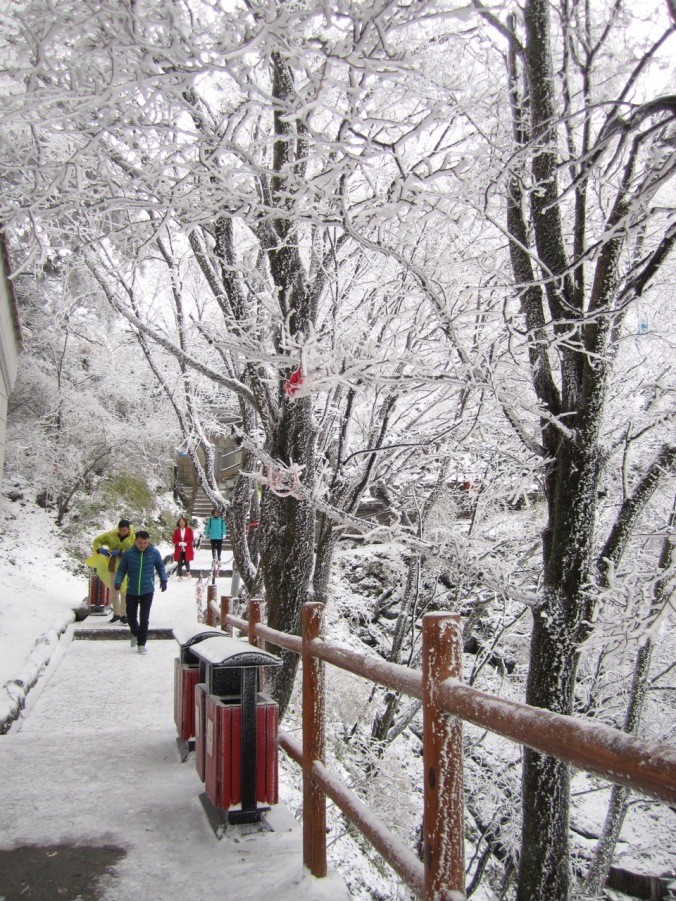 From the bottom of the cable car, we took the mandatory shuttle bus the rest of the way down the mountain (another 40 yuan each).  It luckily dropped us off right near our guesthouse on Lu Quan Rd (just down from the Jade Temple) and we were back in our room by 4pm.  Our dream of a hot shower was apparently asking too much though.  The water pump wasn’t working at our guesthouse, so not only could we not shower but there was no water for the tap/toilet 😦  I considered just heading back to Xi’an, but we decided to stay put and were finally treated to our hot shower by about 7:30pm.  Victory!

But for the ice, I don’t think that the mountain necessarily deserves the title of “most dangerous.”  The biggest danger for us today was simply slipping and falling, which in most sections wouldn’t have been a big deal other than the obvious pain in the butt.  We held on to the chains whenever available and tried to avoid groups (no need to play dominos today).  While the hike wasn’t quite what we expected given the snowy conditions, it ended up being a beautiful (albeit chilly) day.

6 thoughts on “Climbing Mt. Huashan — The World’s Most Dangerous Trail”